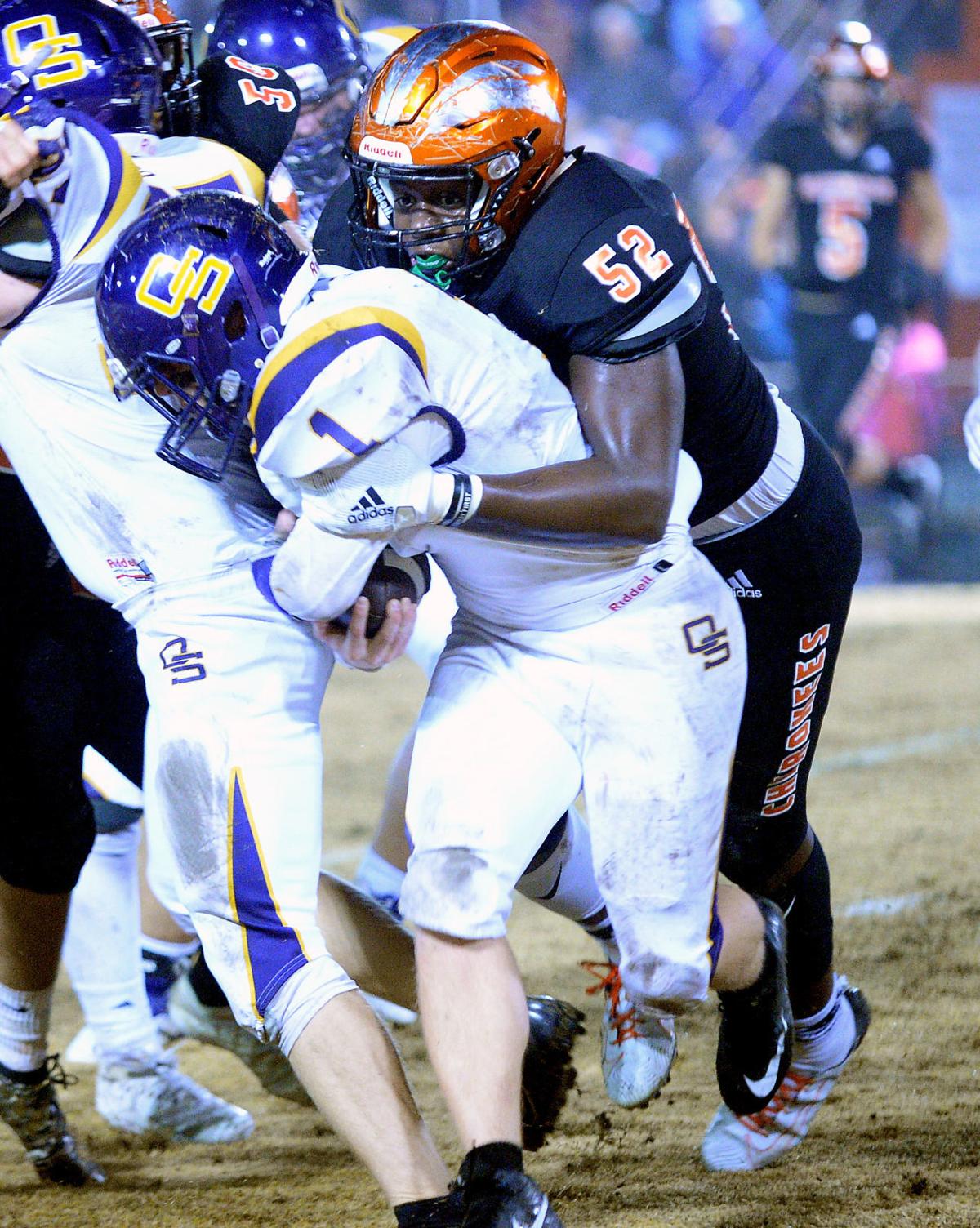 Greenback School’s Derrell Bailey Jr. sacks the quarterback Friday in the Cherokees’ 35-0 win over the Oliver Springs High School Bobcats in the Class 1A quarterfinals. 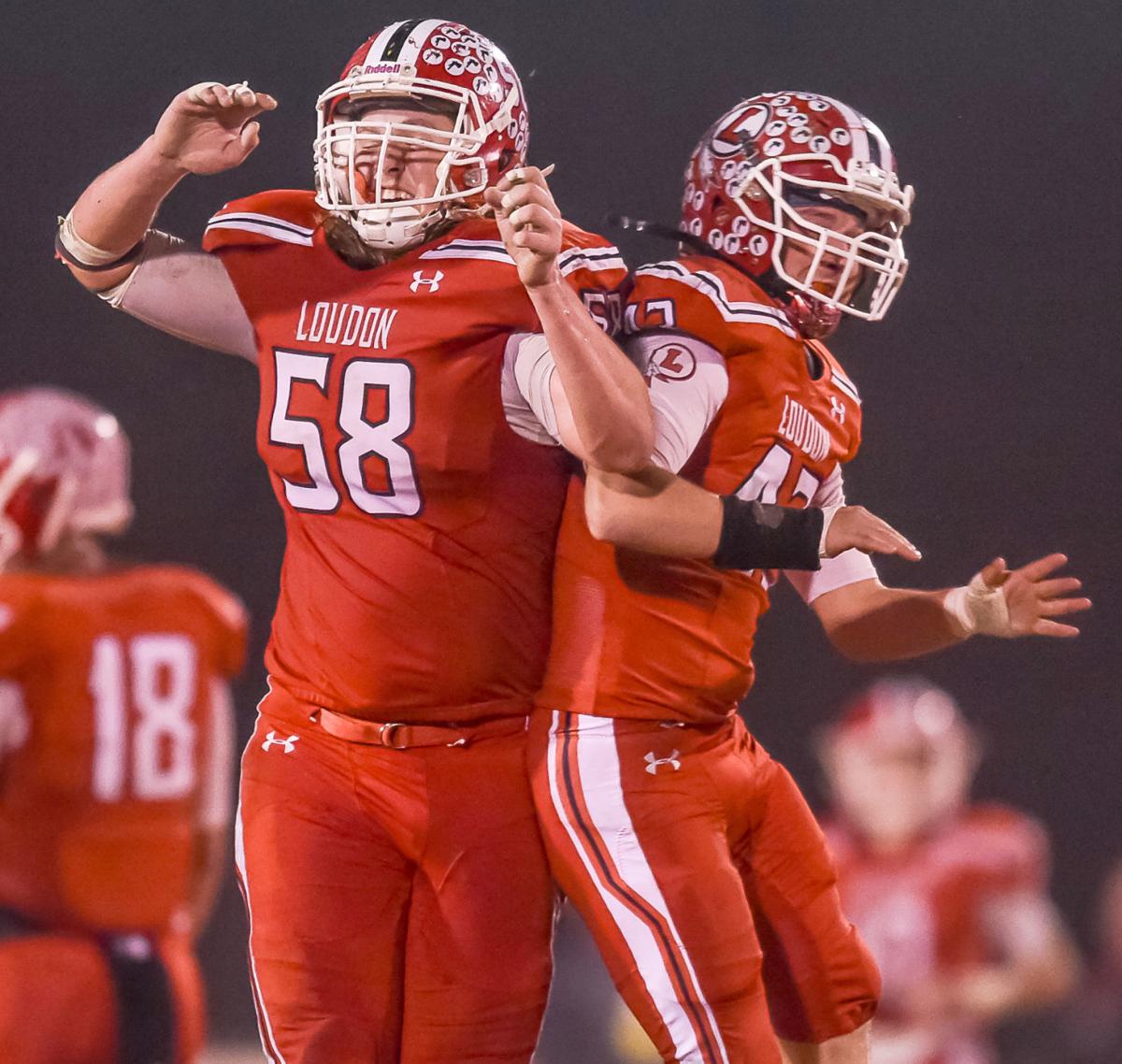 Greenback School’s Derrell Bailey Jr. sacks the quarterback Friday in the Cherokees’ 35-0 win over the Oliver Springs High School Bobcats in the Class 1A quarterfinals.

The Cherokees are coming off a big 35-0 win over the Oliver Springs High School Bobcats and will play in their fifth consecutive Class 1A semifinal Friday against the South Pittsburg High School Pirates (12-0).

Greenback is now the only single-A team in Tennessee high school football history to appear in five straight semifinals.

“Last year when we made the semifinals, there were only four single-A schools in history that made the semifinals four years in a row,” Greg Ryan, Greenback head football coach, said. “It’s been such a long record, one of the schools was Walland High School, which is not even a school any more. To make it the fifth year in a row, we’re the only team in single-A football history in the state of Tennessee to make it to the semifinals five times in a row.”

The 2019 Cherokees’ offense has been one of the most productive in school history and will look to create problems for the Pirates.

Quarterback Braden Carnes is ranked No. 1 in the state with 3,340 yards, 47 touchdowns and five interceptions on just 221 attempts.

“Really, it’s just about making enough plays to win,” Carnes said. “That’s what everyone’s doing. Whatever I can do to help the team, I’m going to do it, regardless — stats are out the window at this point. Just taking every game, play by play and just doing whatever helps the team. There’s definitely some things we can get better at, but overall, I’m really happy with it, and I feel like we’re clicking at the right time.”

Carnes believes his experience at Maryville and playing in big games will be beneficial.

“Anytime you get more playing time, especially postseason, it’s big for your nerves and just getting ready in preparation,” he said. “My first start ever was at Oakland, actually, so playing big teams and how well we’ve played against big teams and our tough schedule this year, I think that’s going to help us. I really look forward to Friday.”

Eyes were on a Greenback-South Pittsburg semifinal matchup well before the end of the regular season. The Cherokees took the last meeting two years ago with a 31-20 win over the Pirates in the Class 1A semifinals.

“Anytime both teams have good team speed, there’s a lot of collisions,” Ryan said. “We expect a good physical game. We’re two total opposites. South Pittsburg’s a predominantly run team, we’re a predominantly pass team, so I think it’s about really who protects the football, who takes advantage of the extra possession, whether that means making one team punt or turn the ball over or a costly penalty here or there. It boils down to execution and playing hard football.”

As well as the Cherokees have played down the stretch, the Pirates will prove difficult. South Pittsburg’s offense is averaging 50.5 points per game, while the defense has limited opponents to an average of 7 points.

Similar to Greenback, the Pirates have multiple weapons on offense, including dynamic running back and Mr. Football finalist Ronto Tipton.

“They’ve got weapons all over the field,” Ryan said. “The quarterback can run it, he can throw it. They got a receiver that’s very dynamic with the ball in his hand, No. 5. They’ve got wings — No. 2, No. 5, No. 7 and No. 4 — they all play wing and have a lot of speed and can really hurt you on the perimeter if you don’t contain well. They got a fullback, No. 21, that runs the ball very similar body style to Breeden (Gilbert), so very physical downhill. It’s still Wing-T though, so you’ve got to play assignment football, and everybody’s got to get lined up first and foremost because they’re not going to wait on us to line up.”

“It’s what I was telling the guys last Friday night, yeah, we expect a really electric atmosphere, and there will be a lot of people here,” he said. “These guys live to play in games of this magnitude and for this opportunity to play in the state championship game. I think our guys don’t get too overwhelmed with anything. I think we’ve got a lot of guys that have played a lot of football and played in big games like this, and I think we’ve got good senior leadership that can let the younger guys understand what to expect. We expect a really good crowd and a really good football game, regardless of what happens.”

Steven M. Sipple: Ex-Husker leaves us too soon; Adrian 'drafted'; and get this: a relaxed Bo

For the first time in five years, the Loudon High School Redskins are returning to the semifinals after a 33-14 win over the Red Bank High School Lions.

“I think (confidence is) high, but Alcoa has a way of bringing those things back down to earth,” Jeff Harig, LHS head football coach, said. “From an execution standpoint, our guys played a great game. We’ve just got to go out now and execute against, probably, the best team in 3A.”

Similar to the 2014 semifinal matchup against Fulton High School, the Redskins will have their hands full Friday when they travel to take on the defending, four-time Class 3A champion Alcoa High School Tornadoes (12-1).

“At the highest level of 3A football, it’s an urban sport,” Harig said. “Alcoa, Fulton — those teams have won it ... CAK, an urban team. For us rural teams, it gets really difficult the higher you climb. For us to get over a team like Red Bank was a testament to how good this team really is, but we’ve got the ultimate super power in front of us in Alcoa. They’ve won it the last four years, and if they didn’t win it, the team that beat them went on to win it. This is as good as it gets.”

The Tornadoes blew through the first three rounds, outscoring opponents 170-34.

Offensively, Alcoa is led by quarterback Sam Vaulton and dynamic playmakers in Isiah Cox and Ahmaudd Sankey. Defensive end and 3A Mr. Football finalist Grey Carroll has created havoc in the backfield all year.

Both teams will look to outwork one another in special teams. The Redskins are led by former All-Region 3-3A kicker Mark Ridenour, while Alcoa features one of the best kickers in the state in Mr. Football finalist Zeke Rankin.

“From 2005-2012, we were in the same region as they were,” Harig said. “I guess four of those years, we played them twice — once in the regular season, once in the playoffs. The biggest thing to me as a coach that you can compliment them on ... because the obvious is the athletic part, but they are so fundamental and pay so much attention to the smallest of details better than any team that we’ve faced. From a coaching standpoint, they’ve got all the things that one can control under control, and they make the game about their talent. They have discipline, so not only do you have fundamentals, you have discipline plus you’re the most talented team on the field, so that makes a recipe for success.”

The Redskins caught a preseason glimpse of the Tornadoes in August during a preseason scrimmage.

“It went well enough in the fact that it proved we belong,” Harig said. “They executed better than we did on some things. They had an athlete or two that went over top and made plays. I do think that gave us a glimpse that we belong, and the fact ... what we see and what we did aren’t good enough, we’ve got to be better than that, and we have become better than that. As coaches, it really exposed us and gave us a good glimpse of what we needed to do to be successful in the season.”

Senior running back Drew Jackson is familiar with Alcoa and has dreamt about this matchup since his freshman year.

“This is probably the deepest run I’ve had in my high school career, so right now I’m just cherishing it, enjoying the moment,” Jackson said. “That’s a different type of speed, so you know you’ve always got to adjust your angles with those. We’ve got to keep our head on straight and come in and prepare for Friday.”

“Yeah, at the beginning of the season, we looked at going down to Alcoa,” he said. “That’s where we are, so we’re pretty proud of ourselves.”

Although the Tornadoes look to be the more talented team, Jeff Harig believes the Redskins will be able to match up in several areas. Nonetheless, it will still be the biggest challenge of the year.

“Obviously, I would think that when you put the film in our offense or defense, we might have three or four guys that could go over there and start or play for them,” Harig said. “I don’t think Alcoa would trade for more than three of ours, player for player, so that means ... what about the other 19 guys? We’re going to have to step it up and play at our best. What that translates to is every play is a battle. As coaches, we’ve got to put our guys in the best position possible to win their battle, even though athletically, they’re not the better player. That’s a tough challenge and it takes a lot of discipline and heart.”