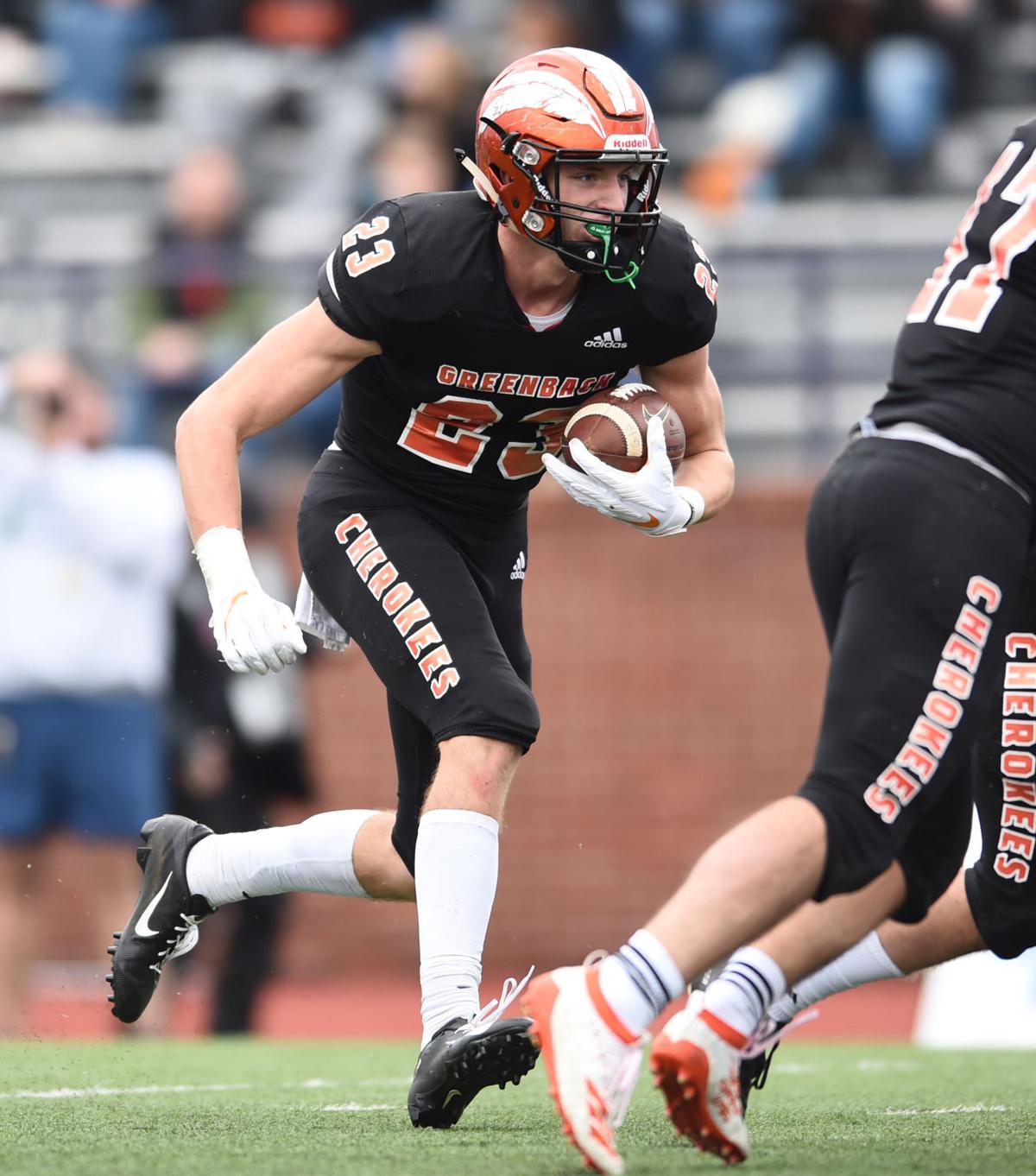 Greenback School’s Holden Willis bursts into the end zone Dec. 6 in the Cherokees’ 38-23 loss to Lake County High School in the Class 1A BlueCross Bowl. 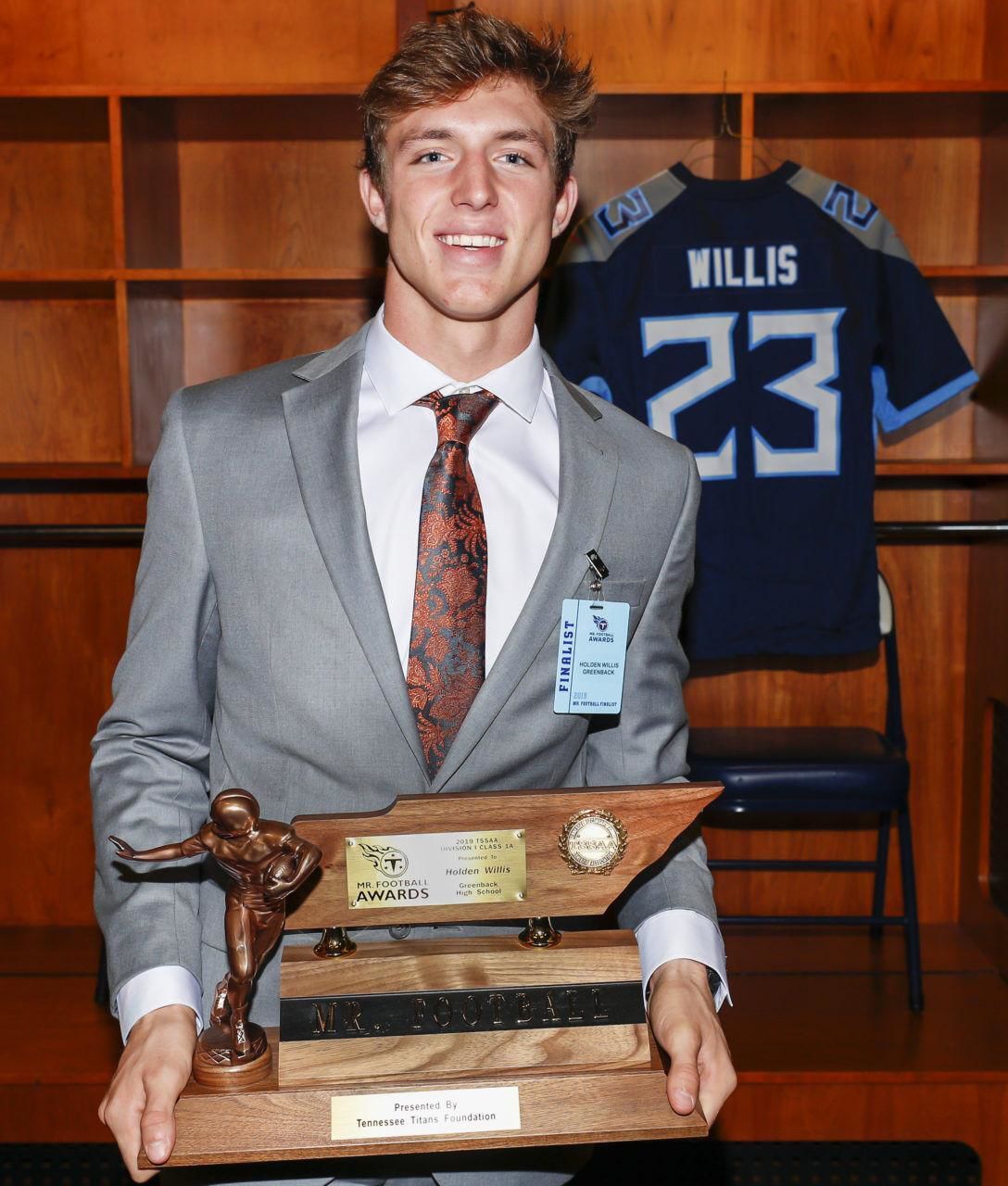 Greenback School’s Holden Willis bursts into the end zone Dec. 6 in the Cherokees’ 38-23 loss to Lake County High School in the Class 1A BlueCross Bowl.

The Greenback School football program has had more than a fair share of talented players come through over the years, and graduating senior wide receiver Holden Willis is the latest to leave behind a special legacy for the Cherokees.

The Willis family has been well-respected over the past three decades for their accomplishments in Greenback athletics, and Holden credits them for his success the last four years.

James, his father, played football at Greenback. His mother, Cheri, was a star on the basketball court for the Lady Cherokees. His older brother, Hunter, was an All-Region quarterback and led the Cherokees to back-to-back Class 1A state championship games in 2015 and 2016.

“We’re just a competitive family no matter what it is. I mean, we could be playing Xbox and loser’s not going to be happy — that’s how it goes down here,” Willis said. “It runs through the family. My dad played football growing up. Hunter came in and did what he did, and everybody knows about that. It just kind of goes through the family. It’s just a really athletic and competitive family.”

Willis first picked up a football when he was 4 years old. He still remembers joining the Greenback Crickets and creating a special bond with future teammates.

“My very first year of playing with the Crickets, I played with Bryce (Hanley), Blake (Morton) and Reese (Plemons) and the same crew,” he said. “Every other year after that, I would go and play with my younger age group and then I would play up.”

Bryce Hanley recalls forming an early friendship with Willis, but little did he know the two would become one of the most dominant quarterback-receiver duos in the state 10 years down the road.

“We grew up together playing, and it was basically like every other year because the way the rec league was set up,” Hanley said. “Growing up, you knew that he was going to be a really good player and he was going to be a dynamic player. Freshman year and throughout high school, he just continually got bigger and stronger and faster. I think he made a huge leap each and every year ... he just continually got better and better, and that’s just because of how much effort he put into it.”

Although Willis grew up with a football in hand, he became unsure of an ability to play in high school.

However, the coaching staff knew it was going to tap into something special.

“He really transformed himself when he got into high school and realized that he wanted to play some sport on the next level, but I don’t know early on that he knew it was going to be football just because he was good at all three sports — basketball, baseball and football,” Greg Ryan, Greenback head football coach, said. “The more he got to growing and shooting up to be 6’4” and 180 pounds, at that point, it was about working on his speed and development.”

Willis was lanky and did not contribute much on varsity during his freshman year.

He made his presence felt the following season as one of the most dynamic receivers in Region 1-1A after hauling in 43 receptions for 624 yards and three touchdowns. He also made some key plays in the Cherokees’ 42-21 win in the 2017 Class 1A state championship game.

“Just being able to be on the team and contribute to the team that won the state championship for the time in 30 years, that was a big moment and that was just an honor to be on that team,” Willis said. “I enjoyed playing with Bryce and Reese and (Seth and Cole) Riddle. It just keeps getting better, and I wouldn’t even play it anywhere else.”

Willis continued to progress the following two seasons en route to being named to the Tennessee Sports Writers Association Class 1A All-State first team his junior and senior seasons.

A drive to play at the next level motivated him to completely change his body, and it was evident this season as he towered over every opposing defensive back on the line of scrimmage.

“He did everything to get better, and you can obviously tell that he’s one of the best receivers, if not the best receiver, in Tennessee high school football last season,” Hanley said. “He went in and just got better every single day, every practice. He just continually got better.”

He finished his senior year with a bang after totaling 73 receptions for 1,729 yards and a TSSAA record 28 touchdowns. Willis was named to the MaxPreps All-American team and Tennessee Sports Writers Association All-State first team, as well as being named the Region 1-1A Player of the Year and All-County Player of the Year.

“At the start of the season, I really wouldn’t have thought about it. They released that preseason Mr. Football finalists thing, and I didn’t really pay no mind to it,” Willis said. “I never thought about winning one of those before, I just wanted to go out there and play and win and have a successful season. It was about, I think, the second playoff game that I even started to think about Mr. Football again. I was really surprised when I got up on stage and they said my name, so that was a good honor and that was a fun moment.”

Ryan has coached a plethora of talented players over the years but has rarely seen an athlete with Willis’ size and ability in high school.

“At Rhea County, we had a kid go to Clemson to play receiver so I’ve seen some good kids. I’ve coached receivers at (University of Tennessee at Chattanooga), so I’ve been around some good athletes but not many with size of Holden,” Ryan said. “When you’re talking about a kid that’s 6’4” and that is as much as 205 pounds and he’s still running a good time and he’s still got good quickness and capable of doing lots of different things ... hand-eye coordination is really good, route running is really good. You don’t see that on an everyday basis by no means, so Holden is definitely a special athlete, and God’s gifted him with the ability to do a lot of different things.”

He is expected to make an impact as a hybrid tight end for the Bulls under head coach and former Clemson offensive coordinator Jeff Scott.

“There were some schools excited about him playing tight end/H-back, and he wasn’t sure that was the route that he wanted to go early on in the process and was still wanting to see what kind of offers he would get as a receiver,” Ryan said. “All I can tell you is based on what I know about Holden and what I know about what the coach said, his primary position coach thinks that Holden can come in ... but he’s going to have to get in the weight room and build some upper body strength.”

Willis is expected to report to Tampa later in the summer and will continue working out on his own to prepare.

“I’m slowly starting to wrap my mind around it a little more, and it’s actually become more of a college life and it is very different from high school football,” he said. “We’re still two months away from going down there, and I’m having to wake up every morning Monday through Thursday at 10 a.m. to do one-hour group calls with the whole offensive team and offensive position coaches. We’re learning the playbook every morning. The workouts are high intensity. They’re staying on top of you about your weight. It’s a big step and it’s all different, but I’m all for it and I’m ready to go.”

— All-County Player of the Year