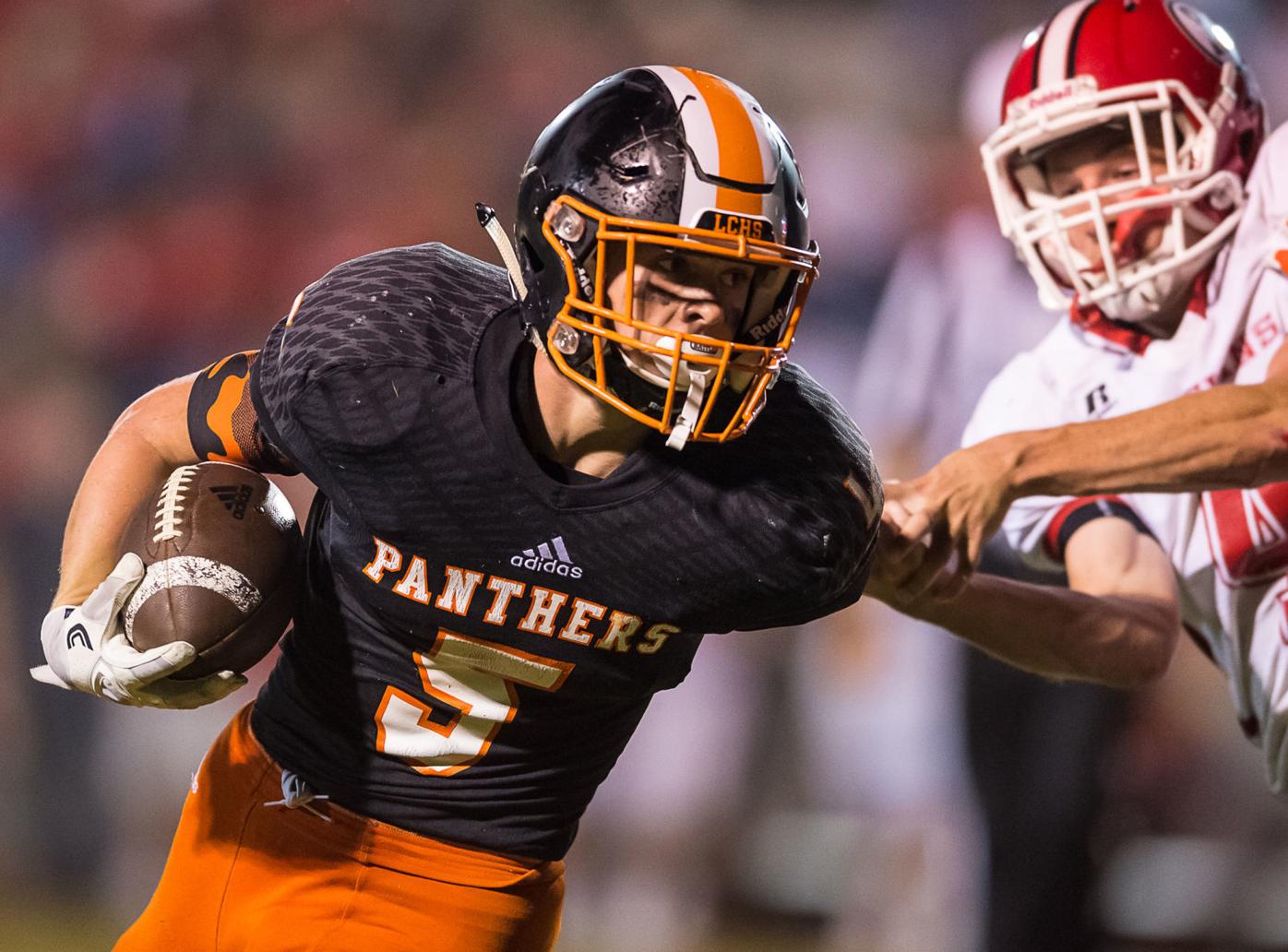 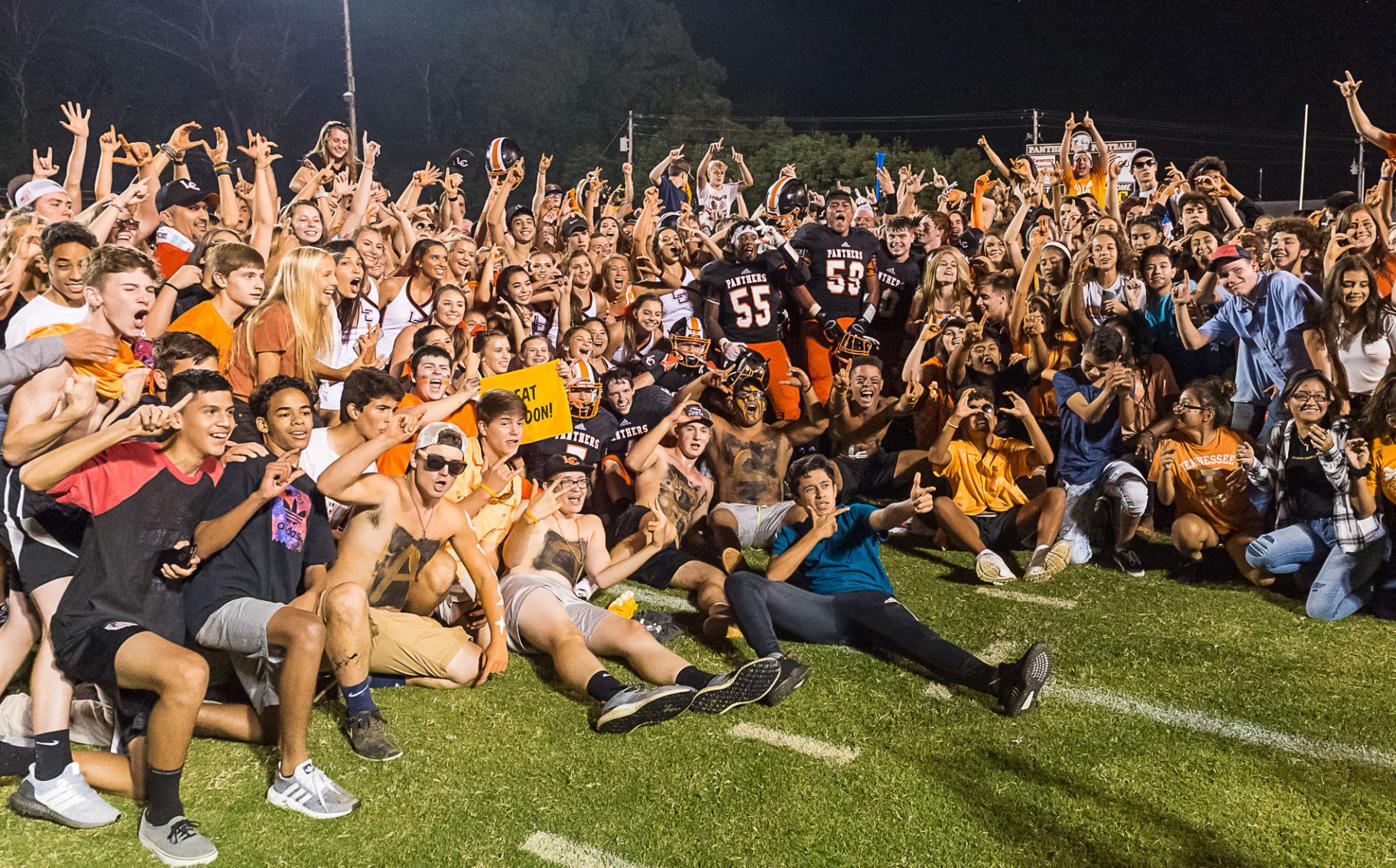 The Lenoir City High School football team and fans celebrate Friday night after the Panthers defeated the Loudon High School Redskins 42-14 in the Battle of the Bridge at LCHS.

The Lenoir City High School football team and fans celebrate Friday night after the Panthers defeated the Loudon High School Redskins 42-14 in the Battle of the Bridge at LCHS.

Friday night was full of offense and explosive plays for the Lenoir City High School Panthers, who cruised to a 42-14 victory against the Loudon High School Redskins to win the Battle of the Bridge.

“Before the game, I think it was very business-like, tense and focused in the locker room,” Cortez said. “We all know the importance of this game. It just feels like a big weight off our shoulders to get through this game and to play the way that we played. It showed some of our capabilities on offense, defense and special teams. We can do this kind of thing on a consistent basis and when we play with this type of focus and intensity, big nights like this can happen for us.”

One of the biggest questions heading into the game was whether Loudon quarterback Drew Jackson would play after suffering a high ankle sprain in the opener against Greenback School. He took the majority of the snaps with a tightly taped ankle.

“He gives us an identity but not in the state he played,” Jeff Harig, LHS head coach, said. “We thought we’d give it a go and see if something miraculous could happen and it just didn’t. Obviously, as the game went on, he got worse. Hats off to Lenoir City because they did what they had to do to win and put the pressure on us. We didn’t respond very well.”

The Redskins showed promise on the first series of the game after starting at midfield. A personal foul on Lenoir City moved Loudon to the LCHS 35-yard line.

Loudon running back Bill Crawley rushed twice to put the Redskins in the red zone before Lenoir City’s Devin Noah came away with an interception that would give the Panthers the ball on their own 33.

The Lenoir City offense immediately capitalized on the turnover when quarterback Gabe Williams delivered a 44-yard strike to Cody Clevenger on the first play of the series. Noah capped off the drive with a six-yard touchdown run to give the Panthers a 7-0 lead with 5:34 left in the first quarter.

“We watched film all week on Loudon’s defense,” Williams said. “We came up with a couple of different schemes that Greenback ran against them and they really worked for us and we were able to make some big passing plays.”

The Redskins followed suit on the next offensive series, which was sparked by a 36-yard pass from Jackson to J.D. Thaxton. Crawley ended the drive with three straight rushes to score, but a missed extra point kept Lenoir City’s one-point lead.

The Panthers’ offense made quick work of Loudon’s defense again, scoring in just three plays on the ensuing drive when Williams hooked up with Clevenger for a 56-yard touchdown pass to give the Panthers a 14-6 lead heading into the second quarter.

“It was definitely one of the best games of my high school career as a receiver,” Clevenger said. “I thought it was a pretty good night for me. We had seen on film that Greenback’s receiver had made some big catches against them, so we stole some ideas from them and we knew if we could get them in space, we could make some big plays.”

Both teams stalled out for most of the second quarter until Lenoir City’s Hunter Wright came up with a blocked punt to put the Panther offense in prime scoring position on the Loudon 29.

From there, Williams delivered a 22-yard pass to Clevenger. Preston Adams finished the drive with a six-yard rushing touchdown to push Lenoir City out to a 21-6 halftime lead.

“I thought we did a good job moving our guys around from time to time,” Cortez said. “All of a sudden, Cody’s been a wide out for us and then he’s at a wing. All of a sudden, Gabe is pulling it and running the ball. The next series, he’s handing it to Preston, so it’s a bit of a dilemma for them, defensively, in knowing what to take away. We utilized those three guys pretty well and they really performed.”

Loudon’s offense finally found some momentum to open the second half, putting together a nine-play drive before the Panthers forced and recovered a fumble at the 50-yard line.

Lenoir City immediately took advantage when Adams broke to his left and raced 50 yards down the sideline into the end zone to give the Panthers a 28-6 lead in the third quarter.

“I knew that I just had one guy to beat,” Adams said. “At that point, I’ve got one guy to get past and then I was gone. This is how our offense should be every game. We just wanted to turn the score up because they did it to us last year.”

The game continued to unravel for the Redskins in the fourth quarter after a block in the back penalty moved the Panthers’ offense to the Loudon 27. Seven plays later, Williams evaded several defenders and tiptoed into the end zone to give the Panthers a 35-6 lead with eight minutes remaining in the game.

The next offensive series for Loudon was short-lived when Noah came away with his second interception of the game after one play on their own 36-yard line.

From there, Williams broke off a 51-yard scramble to the Loudon 13-yard line, where Kaleb Aikens punched in Lenoir City’s final touchdown of the night to extend the Panthers’ lead to 42-6 with just under seven minutes left.

Loudon freshman quarterback Keaton Harig entered the game in the Redskins’ last offensive series and led a nine-play scoring drive, which was capped with a five-yard touchdown pass to Thaxton, as well as a successful two-point conversion.

Once the clock hit zero and the two teams lined up to shake hands, LCHS students and fans rushed the field and celebrated with the Panthers.

For Clevenger and the seniors, this will be a game to remember.

“It just feels amazing to me,” Clevenger said. “This has been the biggest rivalry for me since I was five years old playing with LCYFO. Ever since then, it’s always been a huge game and it’s just an amazing way to end the run against Loudon, especially after the game last year. We finally got the sweet taste of victory this year and we’re going to cherish that.”

With this game now in the rearview mirror, Harig is hopeful his team will bounce back and start getting prepared for Brainerd High School.

“It’s my fault,” Harig said. “I don’t have this team prepared to handle the adversity of, not only our opponent tonight, but the injuries that we’ve had. We just aren’t built to handle the things that are self-inflicted. When I say self-inflicted, I mean stuff happening within our own locker room, such as these injuries and the plan that we can execute on a Friday night. Defensively, we gave up too many big plays and missed some tackles. We’re definitely a team that’s a work in progress.”

Cortez wants his team to celebrate the victory for a short time, but start getting prepared for Friday’s region matchup at Soddy Daisy High School.

“Let’s enjoy tonight and watch our film on Saturday,” Cortez said. “After that, we’ve got to turn around and all of a sudden, we go on a hour and 45 minute drive to Soddy Daisy next Friday night. The stakes are huge, especially in a small district like ours. That game is going to be monumental for us. We got that victory last year. We’re going to have to change gears here pretty quick and focus on the next task at hand.”