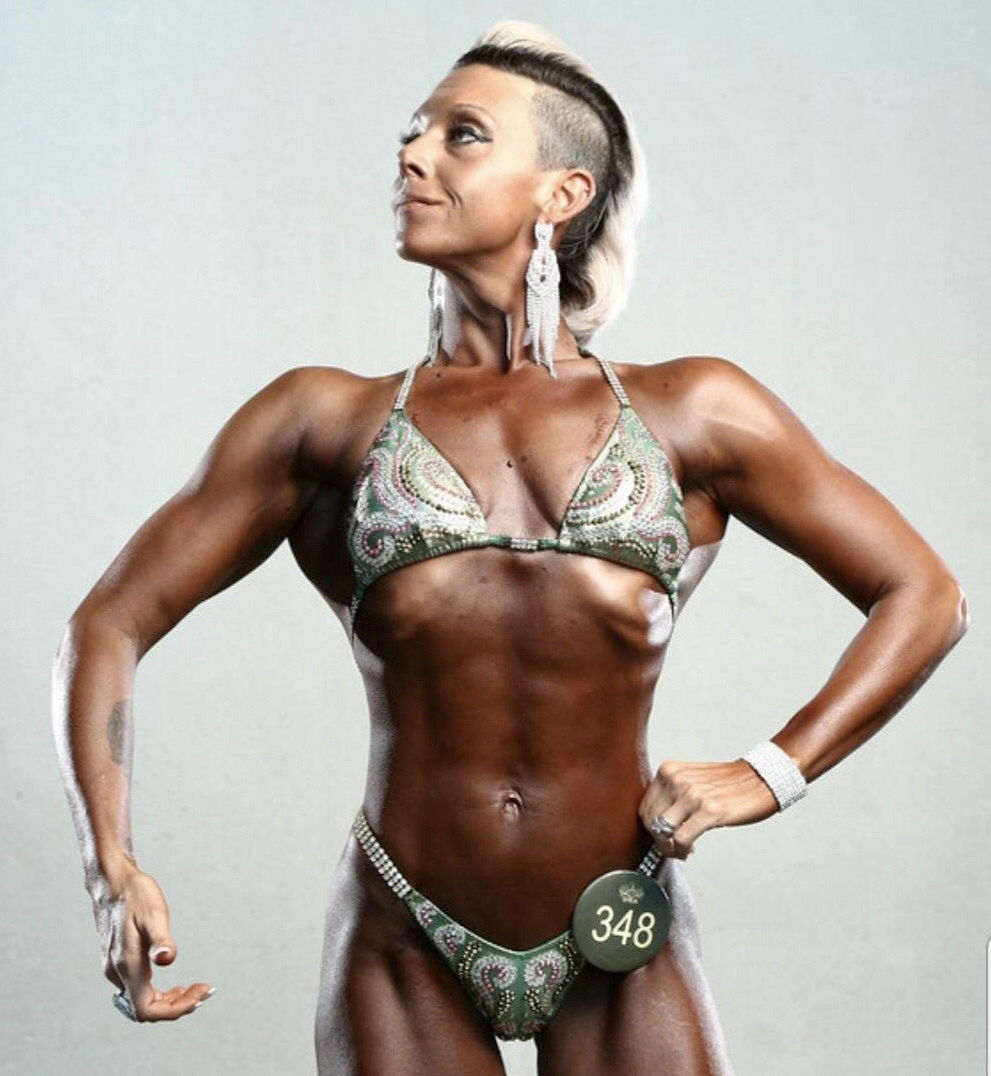 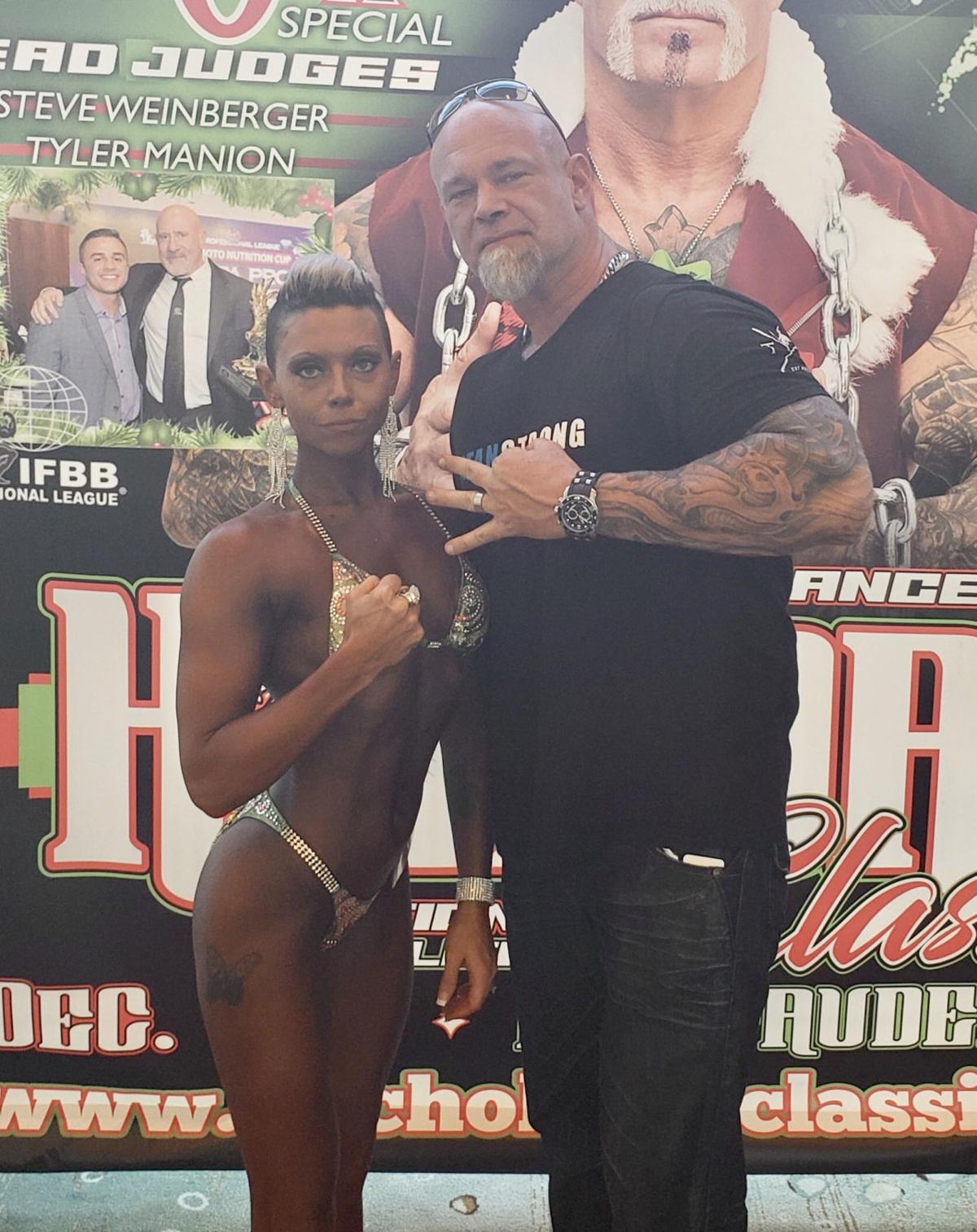 In her wildest dreams, Cynthia Powers never envisioned becoming a professional bodybuilder until a meeting of the fates two years ago when she first stepped inside a gym.

A native of Philadelphia, Powers decided to move to Crossville and begin a new chapter in life.

“A couple of years ago I moved to Crossville, Tenn., and I started in the gym up there,” she said. “I met Gene Powers, which is actually my husband, trainer and coach. I had trained with him for a few years, and I decided to go for competing. This is now my second, going into my third ... my third will be in September of next year. Bodybuilding is my passion. I basically just tried it out and stuck with it. I’m pretty driven, and I set a new goal every year, that’s for sure.”

Cynthia and Gene formed a connection in the most unlikely manner that eventually led to marriage.

“I was heading up a truck driving school, and her ex was a student of mine and they had split up,” Gene said. “They were always talking about training, and even after they had split up, she was interested in working out. One thing led to another, so that’s really how we met there in Crossville. Me, I’ve been in the gym all my life ... and from the gym, competing with the NPC (National Physique Committee) and Masters bodybuilding. It all started with her wanting to be in shape, and it really turned into more of a passion for her. We shared that passion, and that’s where we really grew, so we found that common ground. It just grew and grew and grew.”

Cynthia quickly fell in love with the sport and often viewed the gym as a means of escape.

“The gym itself is my sanctuary, and so when I go there I can relieve stress,” she said. “I look at the mirror, and I use the mirror as a tool, so it’s not really about lifting as heavy as I can, but it’s also about building strength and endurance ... and discipline plays a big role in itself.”

Cynthia and Gene share a unique relationship as husband and wife but also as trainer and client.

“I am her husband, I am her trainer, dietician, coach and drill sergeant, and that is directly out of her mouth,” he said. “It is a challenge separating the two because, of course, I’m her husband and I want to be as supportive as I can, but then also as her trainer, there’s times when you’ve got to be tough. Trying to make sure we keep everything separate where it’s like, ‘OK honey, it’s nothing personal, I’m just picking this apart — you need to do this, you need to do that.’ It has its own unique challenges that most people don’t have because your average person is paying a lot for a trainer, whereas she gets it for free.”

Whether seasons can be saved is unclear, but worried UA season-ticket holders can save their seats

An early look at the 2020 Wisconsin Badgers offense

Cynthia competed in her first two competitions in 2019, placing fifth overall in September in the Figure True Novice division at the Daytona Beach Classic.

She turned around three months later and finished fourth in the Figure Open class in the Mel Chancey Holiday Classic in Fort Lauderdale, Fla.

“I went into Figure Open, which was a big step for me,” she said. “My husband will actually set up a nutrition plan for me, and I have to eat every two hours on the hour, even if that means setting up an alarm clock to get up and eat because consistency plays a key in that. That and your abs are all made in the kitchen, so with that being said, when it came down to it you have to basically be on the diet, then you cut carbs, sugar, sodium. I was on a gluten-free diet for a while, and then when it came to the very last second, you have to dehydrate because you don’t want to have any water bloat when you go on stage, and you carb load.”

Cynthia admits the bodybuilding process is grueling, but the work is worth the pain the every time she steps on stage.

“You put your body through mental, physical and emotion movements when you do those diets,” she said. “It can be a little dangerous, but you also have to listen to your body. Backstage when we’re all lined up together, we’re all in a group and we all have to basically pump up, which is with rubber bands. You can’t really lift weights because you’ll tear the muscle and you’ll put water in the muscle, and that will destroy you before you even walk on stage. ... They call your name out and that’s when everything hits, the adrenaline hits.”

Her family and pride serve as two motivational factors to compete at the highest level.

“I have a lot of family members and things that took the wrong path, and I took a path that I can actually stand tall on and build on every day of my life,” she said. “I’m also a big role model to my children as well. They look up to me, they are with me by my side, they go to the gym with me ... and just being able to represent Loudon, I know it’s a small place because everyone’s like, ‘Where?’”

She plans to step up her regimen in 2020 and compete in the NPC physique class.

“The physique is going to be a totally different monster because I know that I have a lot of size to put on,” she said. “The routine itself, you have to pick a song that’s going to flow on stage and keep the crowd awake. I basically have a faux hawk, so my music’s going to be like old, soft metal. You can basically do your poses to any song, it’s just the one-two-three count that you have to keep in your head. My husband’s gone through so many different competitions, and he was doing this before me and is retired, so he’s just kind of guiding me and leading me through this.”