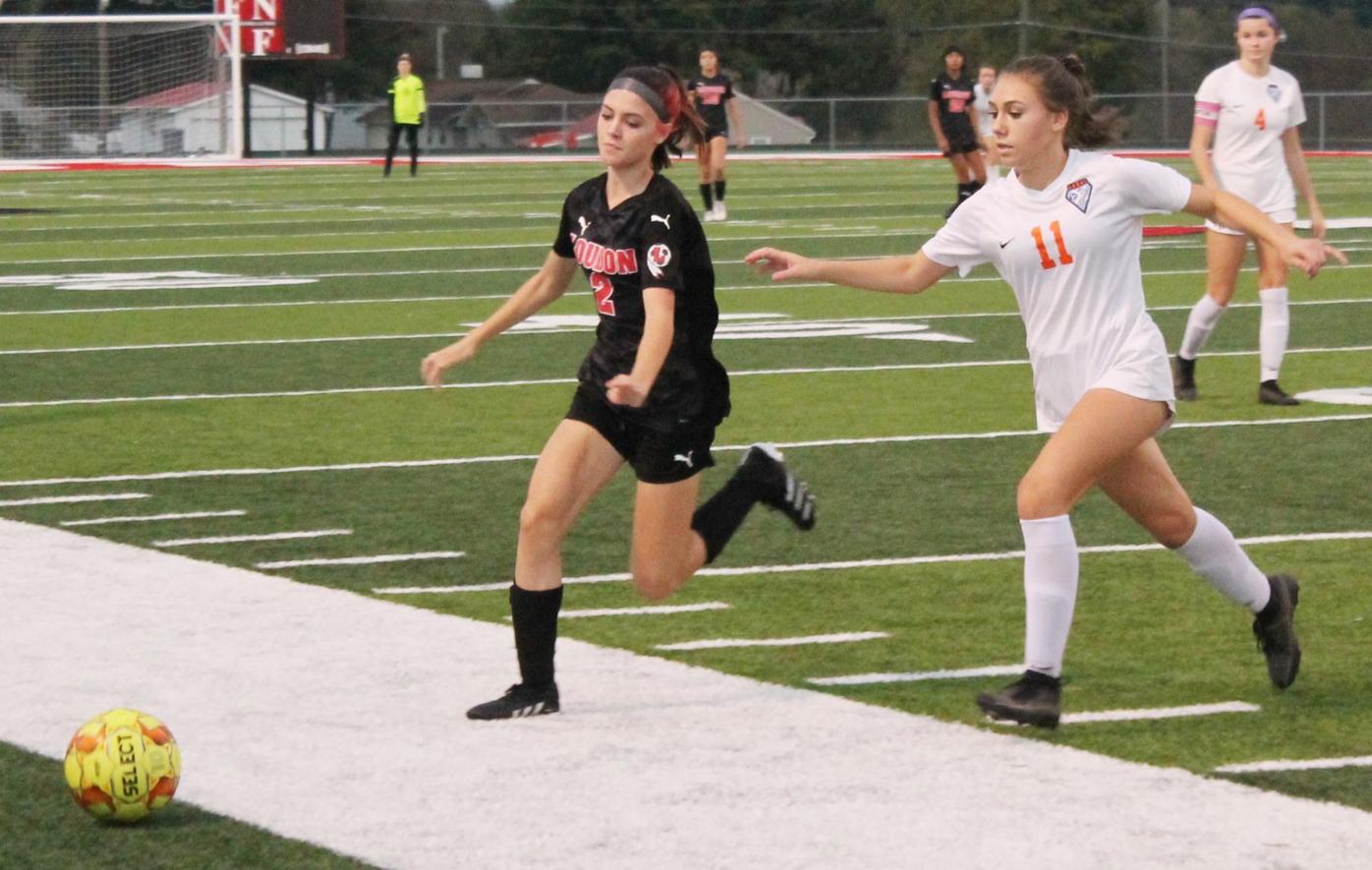 Freshman Destiny Robinette, left, who scored first for Loudon High School during a 2-0 district championship win Thursday, races to get the ball before Greenback School’s Lexie Bryant can arrive.

Greenback School finished second in the District 4-1A girls’ soccer tournament with a 2-0 loss Thursday at Loudon High School.

Freshman Destiny Robinette, left, who scored first for Loudon High School during a 2-0 district championship win Thursday, races to get the ball before Greenback School’s Lexie Bryant can arrive.

Greenback School finished second in the District 4-1A girls’ soccer tournament with a 2-0 loss Thursday at Loudon High School.

In a season of firsts, the Loudon High School Lady Redskins soccer team added another by notching their first district championship.

“I’m so proud of our team,” Kaela Correa, LHS junior captain and center midfielder, said after a 2-0 win over Greenback School in the District 4-1A championship Thursday at Dukes Field. “We were all excited to be honest. A lot of screaming and crying.”

The match was between the top two seeds in the district, with Loudon and Greenback Nos. 1 and 2, respectively.

“I think we’re all really proud of ourselves,” Gonzalez said. “This is what we’ve been working for all season and we finally made it a reality.”

The Lady Redskins (16-1-1, 5-0 District 4-1A) scored in the second minute on a goal by freshman forward Destiny Robinette that was assisted by Correa. Robinette moved from right to left and shot the ball into the back right side of the net.

“(Correa) passed it up and I went to the ball,” Robinette said.

There were two defenders in front of her and a few on the side.

“I went out wide (to the left) and came back in” and saw an opening in the back right side of the net, Robinette said.

The second goal came at the beginning of the 24th minute after a foul against Greenback (8-6-1, District 4-1). Correa launched a high direct kick that deflected off a Greenback defender trying to knock it out with a header.

“We were glad to get back to the championship game,” Fox said. “We couldn’t finish the deal on this one.”

He said the game was a struggle for the Lady Cherokees.

“I felt like we played really well,” Fox said. “My girls had a lot of energy and played with skill. We just couldn’t get past Loudon’s defense. … We also had a couple of breakdowns that led to goals. … Loudon is good enough to capitalize on that.”

Both teams had opportunities and both goalkeepers — Loudon’s Emma Jenkins and Greenback’s Brooke McConnell — notched timely saves, sometimes diving to take away the ball from an opponent and other times deflecting the ball from the goal.

“She’s a really good goalie for us,” Robinette said.

Fox said McConnell also had a really solid game with 14 saves. Greenback had nine shots on goal, with four each from Kiki Bishop and Madison Graves.

LHS made halftime adjustments and was more dominant in the second half.

“I challenged the girls to step up,” Harrison said, noting LHS had nine shots on goal. “We weren’t playing to our best potential. We played much better in the second half.”

“I guess we got our nervousness out and we knew that we wanted to win,” Robinette added.

Despite playing without a few key players due to injuries, Harrison said his team “just hung in here.”

“This is something we’ve worked hard for all season,” he said.

“Mentally, we weren’t all there,” she said. “So we were just excited to give it our all for the district.”

Harrison said the Lady Redskins are down two starters so the game would “probably be an uphill climb for us.”

The Lady Cherokees, District 4 runner-up, played at Oneida (10-7), District 3 champion, in the other region semifinal Tuesday after News-Herald presstime.

Fox said Oneida has been a solid opponent the past four years.