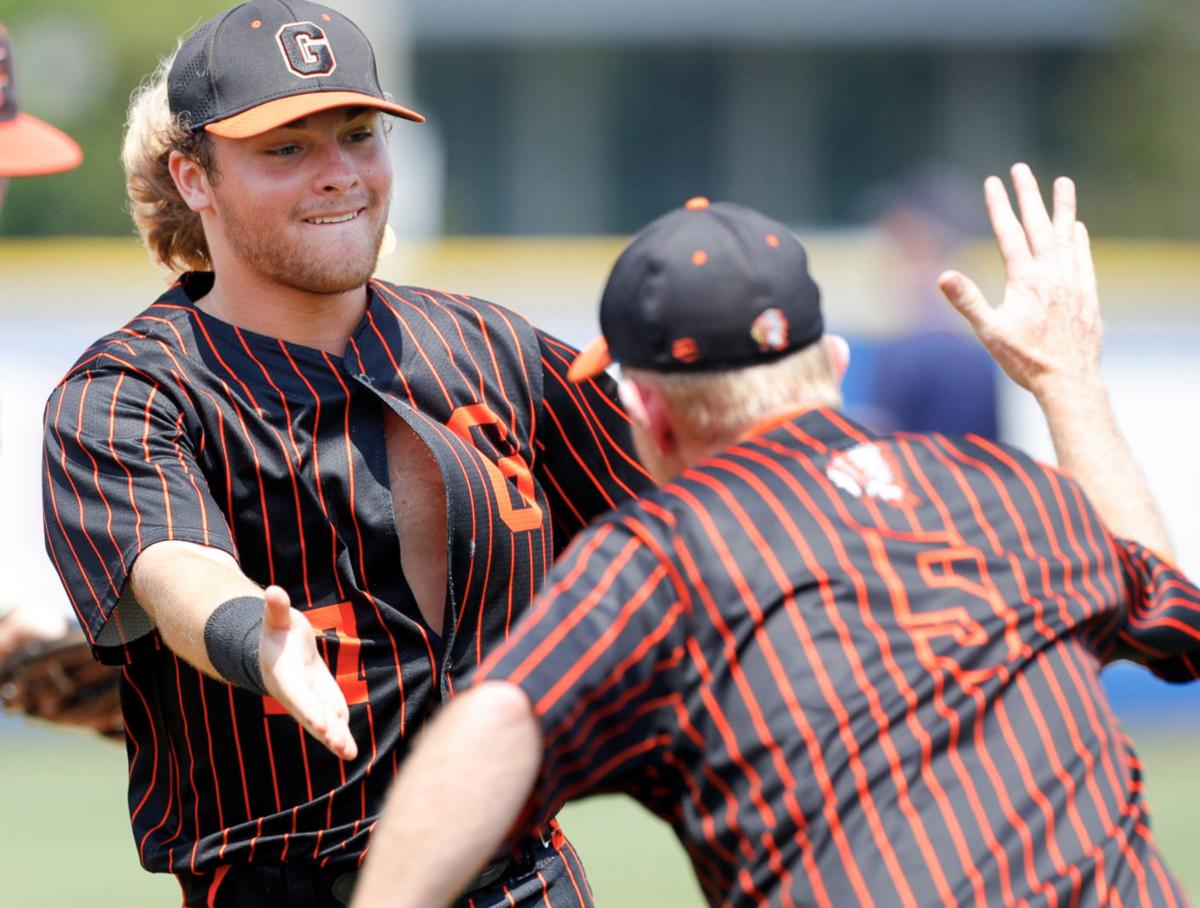 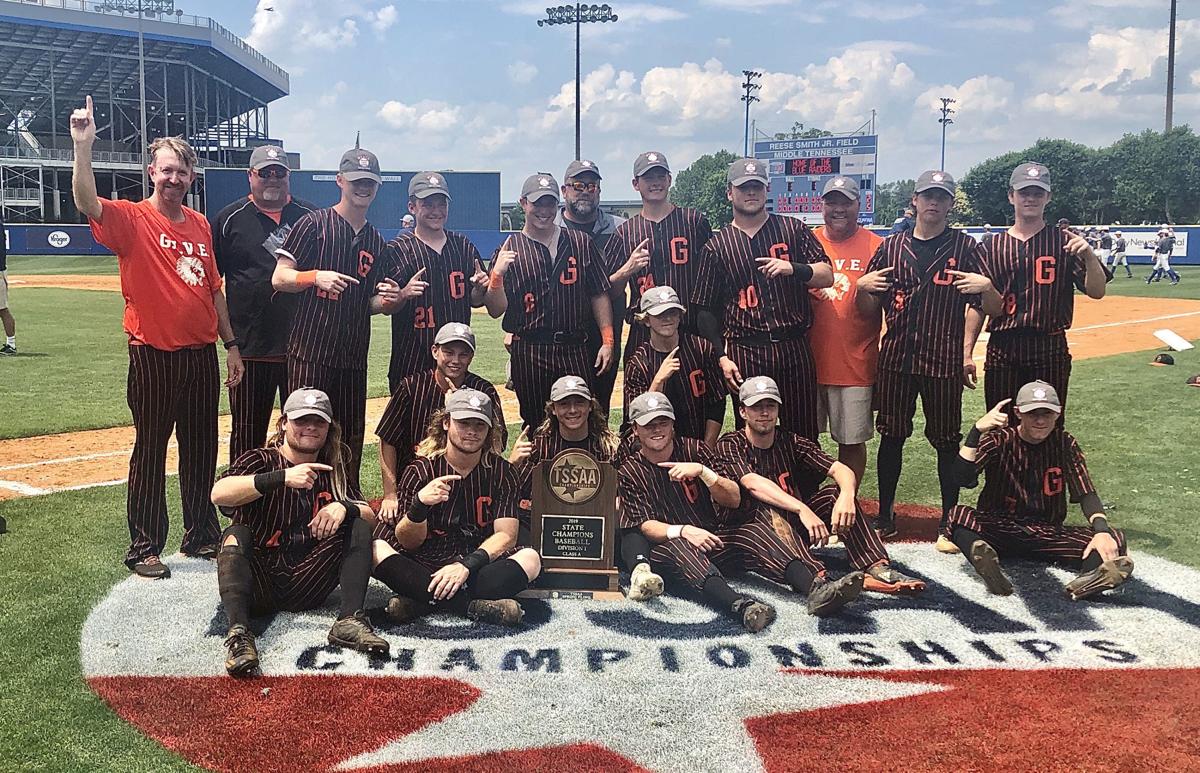 The Greenback School Cherokees baseball team defeated Trinity Christian Academy 2-1 in 2019 to clinch the Class 1A state championship in Murfreesboro.

The Greenback School Cherokees baseball team defeated Trinity Christian Academy 2-1 in 2019 to clinch the Class 1A state championship in Murfreesboro.

Following a disappointing loss in the state semifinals in 2018, the Cherokees knew they were on the cusp of achieving something great.

“That group of guys had been and were going for the fourth straight year, and it all started for us when left Murfreesboro the year before losing in the semis to Columbia — we felt like we could play with anybody there,” Wes Caldwell, former Greenback head baseball coach, said. “We felt like, ‘Hey, we can play with anybody here. We’ve got almost everybody coming back. Next year, we’re not going to be satisfied with anything less than winning it’.”

Caldwell addressed his team with that message on the bus before heading home, fully believing the next year that the Cherokees would be on top of the Class 1A mountain.

Greenback made sure to load the 2019 schedule with some of the best teams across the state, including regular season matchups against Loudon, Christian Academy of Knoxville, Alcoa, Huntingdon and Summertown.

Reese Plemons was a four-year starter and knew from experience that the only way the Cherokees would be able to clinch gold was to prepare all season against the best of the best.

“Usually, our schedule consisted of not really 1A teams, it was more of the power 3A teams that we played just to get ready for the state tournament,” he said. “We were expecting big competition because we went the past two years before that. So we kind of knew what was going on, but, yeah, there was something special that year.”

The 2019 season was the perfect storm for a veteran-heavy Greenback roster that included nine talented seniors who possessed a unique chemistry that most teams only wish to have.

That same group of seniors brought home the 2017 Class 1A football state championship and played a pivotal part in helping build the football program into a consistent contender.

“I think what made it so good was the coaching staff we had and the players, too,” Hanley said. “We’ve all been growing up together since the beginning, and it was something that we always wanted to do. To actually come through and happen, it was a really special moment.”

However, there remained one goal the 2019 senior class set out to reach. After suffering a crushing 24-21 loss to the Whitwell High School Tigers in the Class 1A football semifinals, the seniors wanted one more chance to bring home a state title.

“I’d say that the state baseball title is more special to me,” Plemons said. “It being the only one in school history, and it may stay that way for who knows how long, but, yeah, that’s very special to all of us. We went out hard in football getting beat by Whitwell, and that’s all we looked forward to was baseball, baseball, baseball. It finally came, and we had to prove ourselves.”

The road to gold

The Cherokees cruised through the majority of the regular season and finished 8-0 in District 2-1A, including five wins with 20 or more runs scored. They tore through Region 1-1A and pummeled Wartburg Central 14-0 in the Class 1A sectionals to advance to their fourth consecutive Spring Fling.

Greenback took care of business in the first round with a 6-2 win over Lake County but stumbled in a 13-6 loss to Summertown.

The Cherokees returned to face Lake County in a rematch and won 6-5, forcing a double elimination against Summertown. The Cherokees kept their hopes alive with an 8-2 victory and needed just one more to advance to the finals.

With the game knotted at 4-4 in the final inning, Plemons stepped up to the plate and crushed a walk-off home run to seal a 5-4 win over the Eagles.

“Really I don’t know if anybody else had high hopes after they had run through us twice, but Caldwell did — he never lost faith in any of us,” Plemons said. “The bats come alive for the first time in the state tournament the past three years that we went, and that’s really what we had been missing. ... I just told myself, ‘If anything’s going to happen here, we need it to happen quick.’ They had been living outside the whole game, and then they just throw what you want and you see it.”

The Cherokees were tested all week and questions of fatigue were in play heading into the state title game against the top-ranked Trinity Christian Academy Lions from Jackson.

With the game tied 1-1 and a runner in scoring position with two outs in the bottom of the seventh, TCA first baseman Garrett Bond came up with the biggest play of his life when he delivered a fly ball past Greenback center fielder Seth Riddle to drive in the game-winning run.

“When the ball came off the bat, I thought, ‘That’s a hit,’ so I started watching Seth. Seth got a great break on the ball, great speed, he took a great angle to it, lays out, gives it every bit of effort he can and then I see the ball fall,” Caldwell said. “My heart just sunk to the bottom of my belly. While I’m sitting there looking at that, I just see Seth laid out like he’s taking it hard that he didn’t make that play. I thought, ‘I’m going to go out there and say something to Seth’.”

Just as Caldwell was about to console Riddle, he noticed Bond never touched first to prematurely celebrate with his team. As TCA fans began to celebrate, Cole Riddle picked up the ball and threw it into first to record the out and the momentum shifted in Greenback’s favor.

“When I saw the umpire standing looking at first and not leaving the field, I thought, ‘Well, they saw it’,” Caldwell said. “It’s so loud, music’s playing, they’re celebrating and finally Cole sees us, head nods and we get it to first and the guy calls it out and I’m like, ‘We’ve got to win after that’.”

The Cherokees stifled the Lions with the bunt game and recorded two runs in the ninth for a 2-1 win.

“It was the highlight of my high school experience ... just kind of what we had to do to get to that point and to overcome some obstacles throughout the whole season,” Hanley said. “That baseball season was probably the most special to me and to really all the guys that played a lot of different sports on the team. We all talked about it and thought it was the most special thing that we’ve done at Greenback.”

Caldwell resigned as head coach following the season to return to Ooltewah High School and the seniors went their own way after graduation.

“Loving your teammates the way those guys do, working hard and being willing to play the schedule they played, they’re just what baseball is about,” Caldwell said. “The kind of competitors these guys are, I mean, they’ve just got hearts the size of Texas. I think the thing everybody will remember is we were a good team and all, but we didn’t just show up and throw our cleats out there and outplay everybody.

“We obviously had a lot of talent, but to win it and we’re as talented as anybody there ... to win baseball games, you’ve got to have mental toughness down the stretch,” he added. “These guys combined their great talent with their love for their teammates and their competitive drive, they were just never out of it. They were determined to play one more day, and they lived that way.”

Championships: Class 1A State, Class 1A Sectional, Region 1-1A, District 2-1A