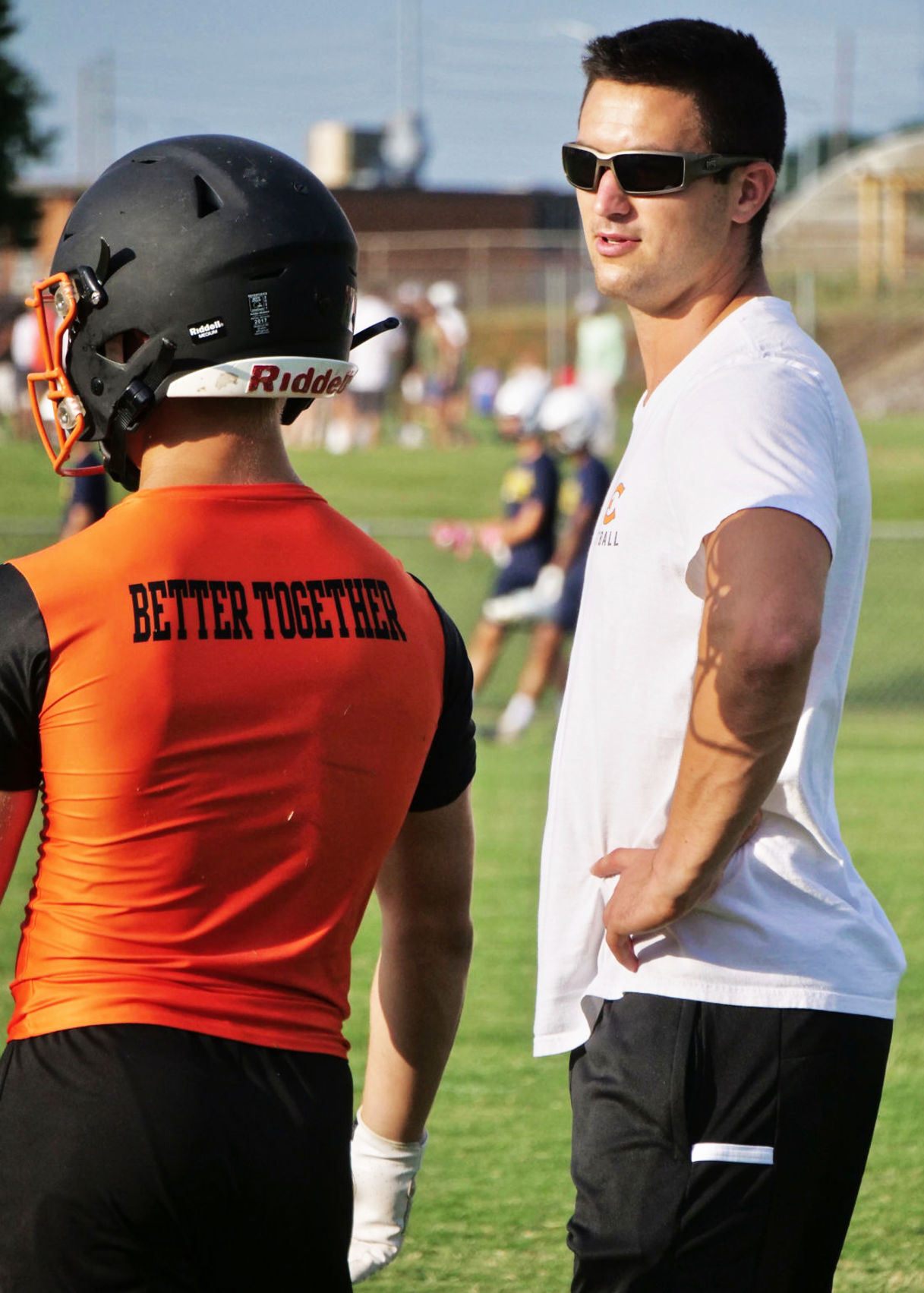 Jacob Cortez speaks with a Lenoir City High School player on the sidelines during a camp at McMinn County High School. Cortez, a 2016 LCHS graduate, is a senior wide receiver at Maryville College. 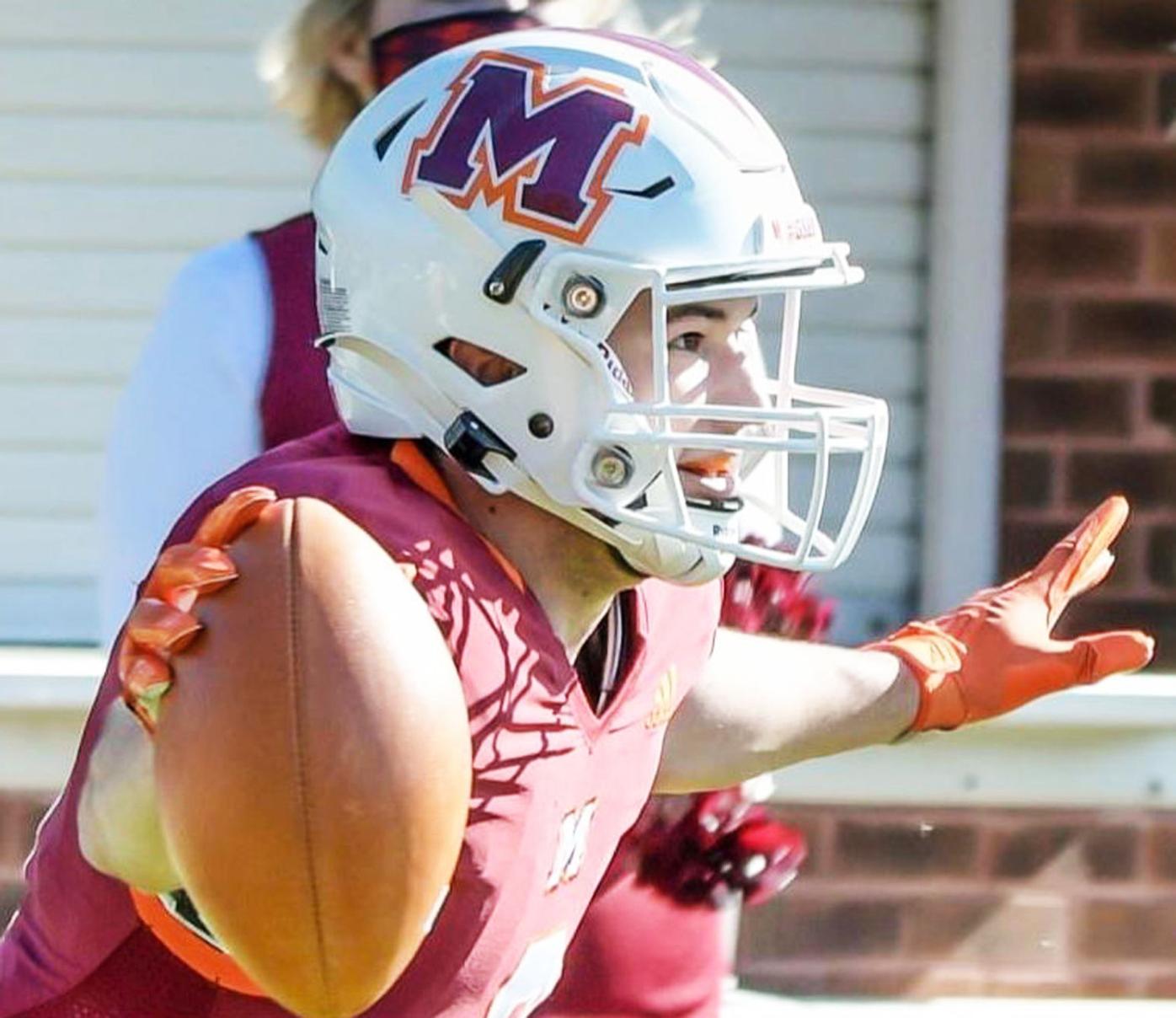 Jacob Cortez speaks with a Lenoir City High School player on the sidelines during a camp at McMinn County High School. Cortez, a 2016 LCHS graduate, is a senior wide receiver at Maryville College.

Maryville College wide receiver Jacob Cortez is hoping all his efforts will pay off this season.

The sixth-year senior and former Lenoir City High School standout could have graduated in the spring but chose to come back for a final season thanks to the new senior redshirt rule after the COVID-19 pandemic.

The team was unable to play last fall but instead moved the season to the spring, where the Scots finished 2-2.

“This whole past school year was kind of crazy because in the fall, we’re used to having football, playing on Saturdays and practicing throughout the week,” Cortez said. “That just didn’t happen, so we just kind of had to roll with it and play the cards that we were dealt. It definitely wasn’t ideal, but it was almost kind of nice in a way ... but in the fall, I had to get quarantined twice. It was just a bunch of stuff where we had to roll with the punches and do what we can to prepare for the spring season, but there were some things we didn’t know. That was just our mindset in the fall, but the spring was definitely fun and something that we’ve never done before.”

As if the year wasn’t any more challenging, Maryville College conducted a coaching search two months before the start of the season and eventually landed on former Centre College offensive coordinator Ben Fox.

“It was kind of crazy and didn’t know what to expect, but it was like whenever this coach comes in and whatever it is he wants to do, we’re just going to roll with it and try to buy into his program,” Cortez said. “He installed a new offense for us, the defense stayed the same but with the offense stuff, we all had to adjust because we had practiced something completely different in the fall semester. The next spring, we had like five weeks before our first game, but we all just had to buy into this new program, new offense, new style of coaching and I think we rolled great with it with the kind of cards we were dealt.”

Fox was immediately drawn to Cortez when getting to know the team.

“I had a good idea about the caliber of players we had on our team and the caliber of coaches,” Fox said. “I asked our assistants when I first got started and was like, ‘OK, who are some guys on our roster that we can count on?’ He was somebody that jumped out and somebody that we believed we could count and ask him to do a lot of different things. The thing with Jacob is he’s very physically strong, he’s very competitive and he’s a coach’s kid, so he’s a very intuitive football player. He is allowed to do a lot of things and has the ability to do different things postionally moving around and that gives us a lot of depth.”

After graduating from Lenoir City in 2016, Cortez played at Carson-Newman University for three seasons before transferring to Maryville College in spring 2019.

In 14 games at Maryville College, Cortez has 13 receptions for 158 yards and two touchdowns. He racked up 133 of those yards in the spring, including a game-deciding touchdown grab April 2 in the Scots’ 27-24 win over Averett University.

“Jacob would play 15 to 20 plays a game at tight end, in addition to playing receiver,” Fox said. “He was very productive and made some big plays for us and caught a touchdown here in our last game of the season. It was a big play and I think it was our last touchdown that kind of put us over the top, so I’m really happy for him and happy he was able to get that experience of coming back and playing. I’m thrilled he’s coming back because he will provide some leadership and experience, and he’s calm on the field and doesn’t get real jacked up about things in a negative way.”

Cortez had the opportunity to come back to his alma mater in the fall and help coach Lenoir City’s wide receivers during the season under father and LCHS head coach Jeff Cortez.

Jacob also worked with younger brother Brett, who started most of the season as a freshman last year for the Panthers at quarterback.

“I think it’s helped me as a player tremendously because I’ve gained a better respect for coaches and saw the kind of stuff they go through with planning and preparation and stuff,” Jacob said. “It’s been really nice to pour back into the program that I grew up in. It’s been a lot of fun because I’ve gotten to coach with coaches that coached me forever. Blake Harris was the defensive line coach for the North Panthers when I was in seventh grade, and now I get to coach alongside him, so that’s awesome. Coaching with my dad is awesome because growing up I was coming to practice and games with him, getting to coach alongside him.”

Maryville College will kick off the season Sept. 4 at Berry College, but all Jacob is focused on in his final season is doing whatever it takes to help bring home a conference championship.

“I feel like I’ve never had a full, complete season, and this is my sixth season playing college football so I want this to be a good one,” he said. “I decided myself that I’m going to push myself, expect more from myself and I want the coaches to know they can ask me to do anything. I just want to do everything I can to help this team win a conference championship. That’s always our goal.”