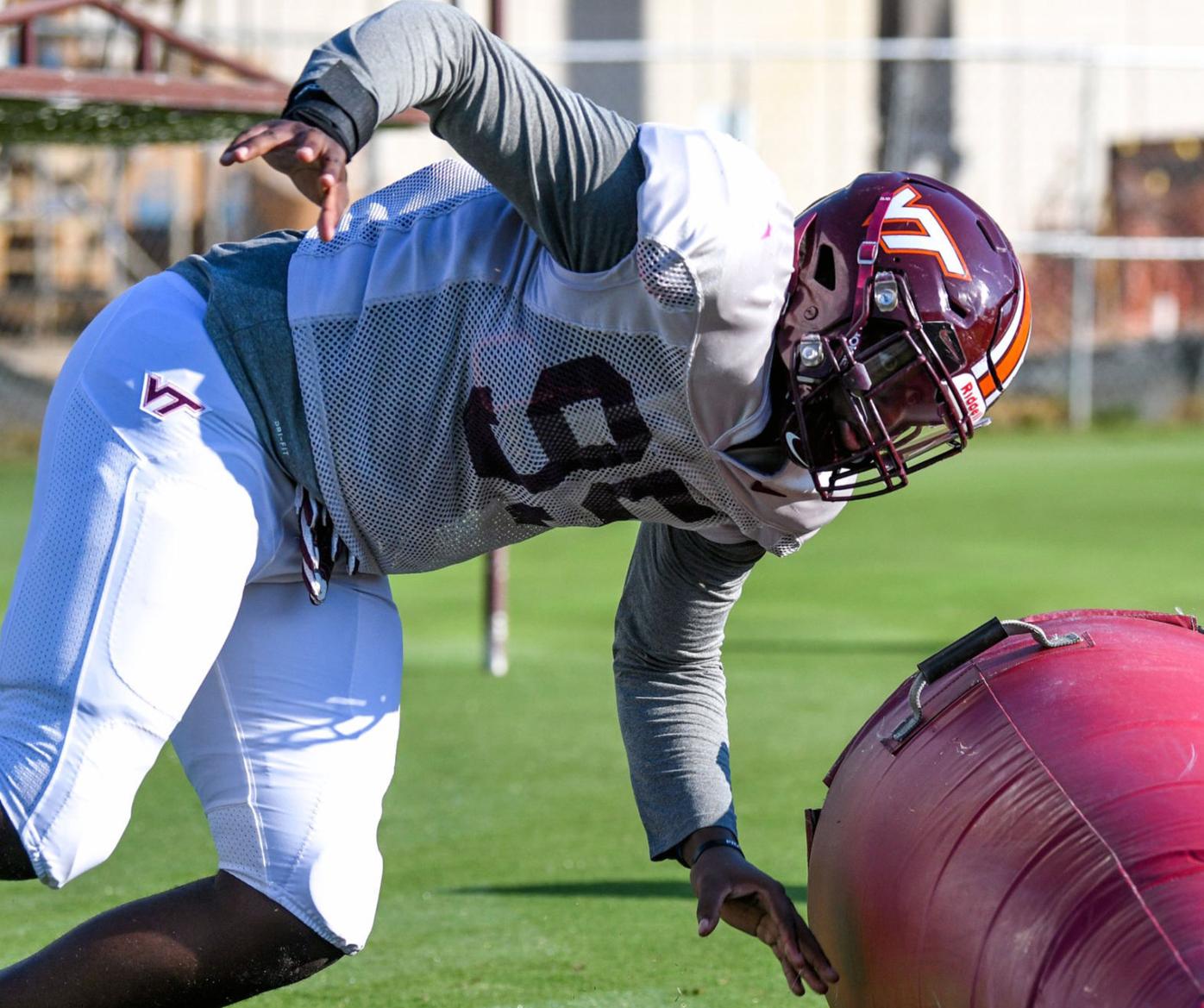 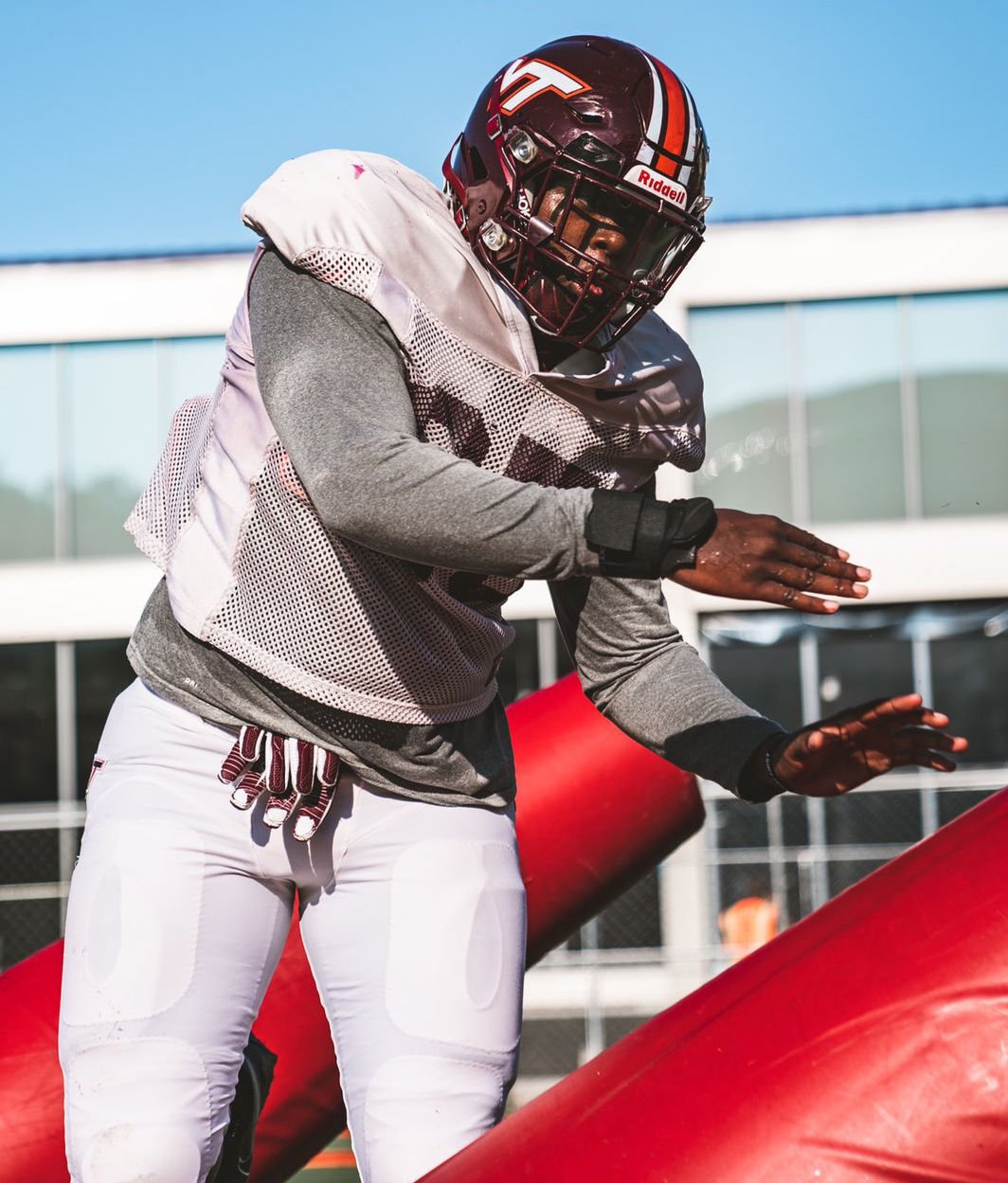 Derrell Bailey Jr. knocks over a tackling dummy during practice at Virginia Tech. He graduated from Greenback School in 2019.

Derrell Bailey Jr. knocks over a tackling dummy during practice at Virginia Tech. He graduated from Greenback School in 2019.

Former Greenback School defensive lineman Derrell Bailey Jr. is gearing up for what could be an impactful freshman season with the Virginia Polytechnic Institute and State University Hokies.

Bailey finished his senior season in 2019 as a top 60 defensive end in the nation after totaling 40 tackles, 46 assists, 11.5 tackles for loss and one interception. He was named to the Tennessee Sports Writers Association and Tennessee Football Coaches Association All-State teams and was the Region 2-1A Defensive Player of the Year.

He held offers from LSU, Florida, Oklahoma, Arkansas and Oregon but ultimately signed and enrolled early with Virginia Tech.

“It’s been a real good opportunity,” Bailey said. “I mean, of course, it’s not regular right now because of the coronavirus, but it’s still like a fun process that you’re going through. I’m liking it right now and it’s a good transition.”

He dreamed of playing Division 1 football but wasn’t sure it would happen after moving to Greenback from Alabama prior to his freshman year. In his first two seasons with the Cherokees, Bailey was raw but often flashed potential.

Football runs in his blood. A close cousin is Cleveland Browns linebacker and former University of Alabama star Mack Wilson. His father was a standout high school athlete in Alabama.

“When we first met Derrell, he was a 6-foot-2 chubby kid that’s never been in the weight room,” Greg Ryan, Greenback head football coach, said. “The good news behind that was Derrell came in, and we as coaches do the best we can coaching but there’s nothing like a mentor that is a player that can show you the ropes and show you little things that coaches don’t talk about a lot. To have Josh Silvey for a year and then Reese Plemons come in and Derrell get to play side-by-side those guys, I just think that made Derrell an even better ball player.”

Bailey continued to gain size and muscle, topping out at 6’6”, 255 pounds by his senior season.

“He had even called me between his junior and senior season and said, ‘Hey we’re at home, what can I be doing,’ and I remember I was on vacation and he was sending me videos of just takeoffs of him trying to get more explosive getting off the ball,” Ryan said. “He just continuously got better and better, and by the time he was a senior, then he just caused total havoc when he wanted to.”

A consensus high 3-star prospect, Bailey held more than 30 offers from Division 1 programs around the country, but eventually chose Virginia Tech for “feeling like home.”

He is expected to play along the edge for the Hokies but could plug in gaps along the interior if needed.

“There’s no telling how big a young man he’s going to end up being,” Justin Fuente, VT head football coach, said. “He’ll start out as a defensive end, but he’s another one of those guys that when he comes in for a semester and goes back home, people are going to say, ‘Oh my gosh.’ He’s just scratching the surface of what he can become. He’s long, athletic and when he gets in the weight program and starts lifting, I know he’s going to be a big strong kid.”

The COVID-19 pandemic halted most football activities across the nation for the majority of the offseason, but Bailey said he was still able to work out and learn the playbook.

“I feel like it impacted all the incoming freshmen that came in because everyone hasn’t gotten all the full workouts,” he said. “We’re doing the full workouts, but we haven’t had the time to develop and everything. I’m glad I came in early because I have an advantage of some of other freshmen. Workouts, everything is like the same. Right now, we’ve got face shields and visors and stuff like that. Working out is still the same.”

The Hokies kicked off the season Sept. 26 with a 45-24 win over the North Carolina State University Wolfpack, and Bailey has already been included in the three-deep rotation of defensive linemen.

“Right now, I’ve improved on my pass rush,” he said. “I’ve added a couple of moves like a stutter bull rush along with my power. I’m still working on a couple of things like getting down on double teams better and playing gap alignment. That’s stuff I’m working on right now, but everything else is the same game I’ve been playing like tight defense and firing off the ball.”

The jump from 1A high school football to the Atlantic Coastal Conference may seem drastic but Bailey has adapted quickly. He is currently listed as the Hokies’ largest defensive lineman.

“It’s fun because it’s like you always fight and everybody’s the same, like everybody’s good,” he said. “There’s no one here that’s not good, and like the speed of the game is really fast, the way the calls come in. When I first started, I was doing skills and drills and I was working with the twos and threes, and the speed of the defense and how the play call came out ... I mean, you’ve got to know the signals and everything. If it’s a hurry-up offense, you’ve got to be ready to go. It’s different.”

Bailey will have opportunities to make an impact this fall and hopes to put Greenback on the map by the time he graduates.

“Our defensive line is really good, so right now the goal for myself is to get 20 or 30 snaps a game,” he said. “I’m capable of doing that right now and getting 20-30 snaps a game, so that’s like my main goal right now.”

Region 2-1A Defensive Player of the Year