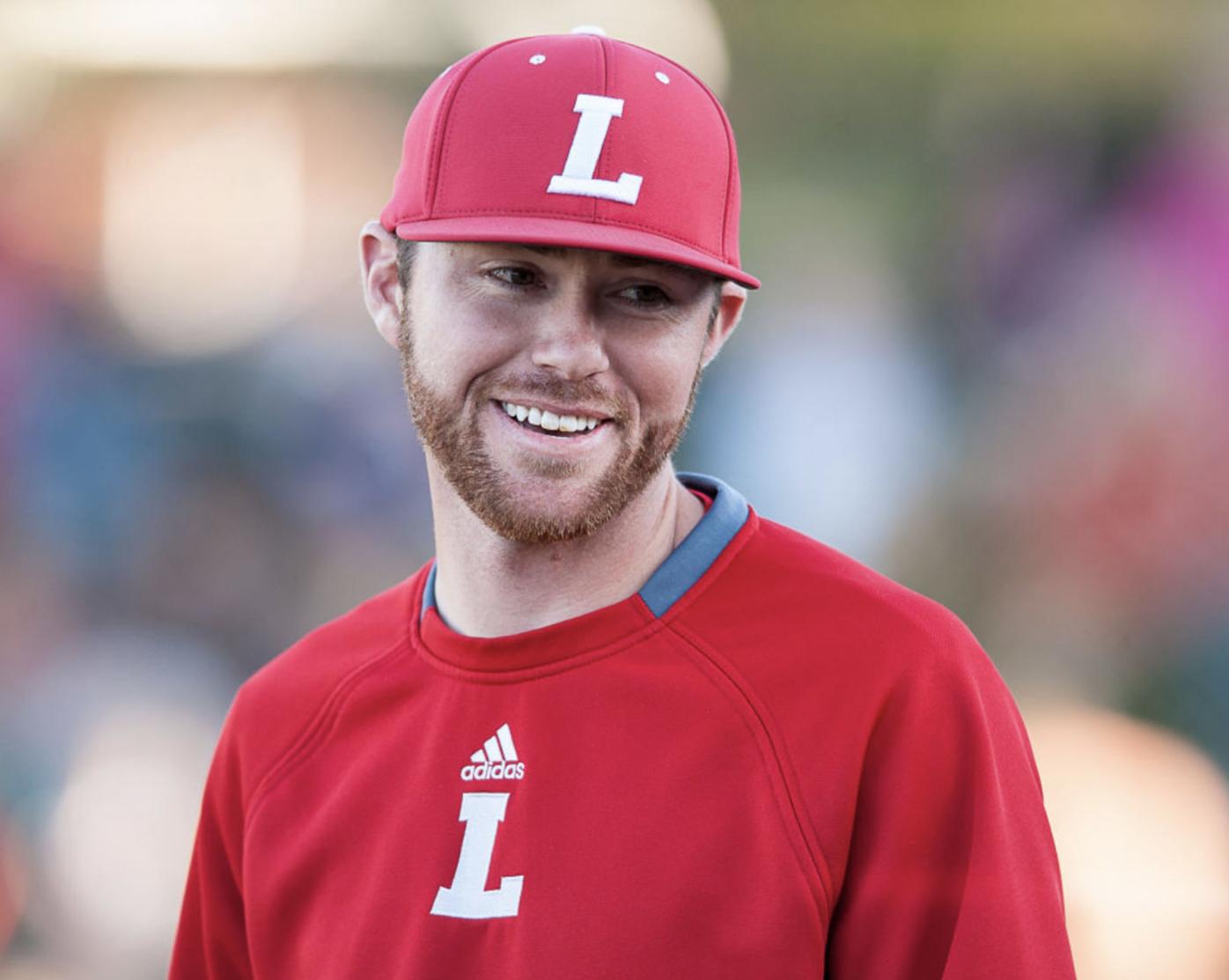 Former Loudon High School baseball coach and University of Tennessee pitcher Aaron Everett is the head baseball coach at Southern Union State Community College. Everett served as head coach at LHS for three seasons and led the Redskins to the state tournament in 2015. 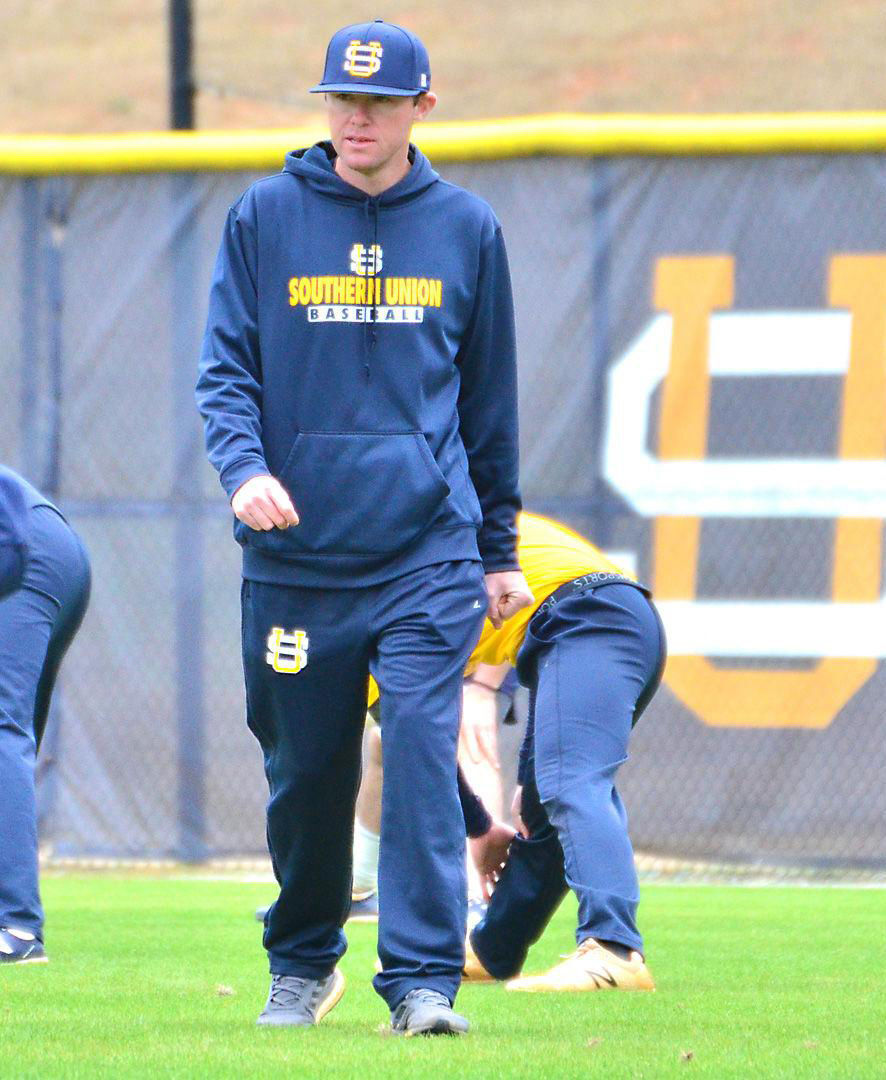 Aaron Everett watches his team during warmups at Southern Union State Community College in Wadley, Ala.

Former Loudon High School baseball coach and University of Tennessee pitcher Aaron Everett is the head baseball coach at Southern Union State Community College. Everett served as head coach at LHS for three seasons and led the Redskins to the state tournament in 2015.

Aaron Everett watches his team during warmups at Southern Union State Community College in Wadley, Ala.

Loudon’s Aaron Everett always dreamed of making it big and becoming a head baseball coach one day but was never sure it would work out.

Everett developed a passion for the game early on and eventually became a key contributor for the Loudon High School Redskins in the early 2000s.

He then realized his potential to become a Division 1 baseball player under former LHS head coach Bill Thompson.

“Everybody always says, ‘Once a Redskin, always a Redskin,’ and that’s 100 percent true because I had some of the best memories I’ve ever had in my baseball career at Loudon High School,” Everett said. “Coach (Bill) Thompson is Loudon baseball, and when you hear Loudon baseball you hear Bill Thompson. I really enjoyed my time playing for him, he taught me a lot of things about the game. We had a special relationship and still do. I just really respected the man and what he did, and it really meant a lot to me and my career.”

Everett didn’t have much success in his first two seasons but began to blossom his junior year in 2004 when the Redskins went 31-6 and clinched the District 4-2A title.

“It was my junior year when I realized that I could do this and started to throw a lot harder,” he said. “I was always a guy that had a good breaking ball and all of a sudden I had a growth spurt, and I was able to gain some velocity.”

Everett began to receive interest from colleges around the country and was one of the top pitchers in the state heading into his senior season. He also starred in several showcases around the nation and went toe-to-toe with future Major League Baseball stars such as Justin Upton, Cameron Maybin, Andrew McUtchen and Buster Posey.

“He was just a great competitor and a great team player,” Thompson said. “He never was concerned about himself, he was always concerned about the team and he hated to lose. We had two top pitchers that year, and of course, he was one of them. He won the sectional game, he won the first round of the region game and put us into the state tournament. He was very instrumental.”

The Redskins in 2005 combined to go 35-8 overall and advanced to the state tournament for the first time in school history behind Everett’s arm.

Former LHS catcher Davy Worley completed Everett’s game as the two developed into one of the best pitcher-catcher duos in the state.

“He had an incredible senior year, and at one point I think he had the state record for strikeouts in a season and a game,” Worley said. “He kind of carried us through that season. We were really close, and we were both competitors so our relationship came natural. He and I could literally look at each other and know what the other one was thinking and know what pitches to call for what batters. It was a real fun experience getting to catch for him those four years.”

Taking the next step

Everett proved one of the best high school pitchers in the country and was drafted in the 38th round of the MLB draft by the San Diego Padres after graduating from Loudon.

However, he received an offer from the University of Tennessee that was too good to pass up.

“Back then coaches couldn’t call prospects until July 1 of their junior year, and I remember we were at Daytona Beach on July 1 and I get a call and it’s coach (Rod) Delmonico,” Everett said. “I received several other calls and offers from the likes of Ole Miss, Tulane and several other schools, but I decided to go to the University of Tennessee and it was fantastic. I got to play with some big-leaguers there like J.P. Arencibia, Yan Gomes and Julio Borbón.”

Everett developed into a solid closer for the Volunteers following his freshman season in 2006 and eventually earned several All-Southeastern Conference honors. He still holds the SEC record for 13 consecutive games recording an out with an appearance.

By the time his junior season rolled around, Everett was projected to have a breakout year and drastically improve his draft stock at the four-year level until he suffered an arm injury during a game against the University of Florida in 2008.

“The fall was going fantastic, I was in the best shape I could ever be in and then spring comes along and we’re just rolling,” Everett said. “I was able to get two saves in one weekend against LSU and swept them for the first time ever at UT. I’m having a great season and we were playing Florida on a Sunday afternoon. I remember I felt fine in the bullpen, I come in as normal, we’re up 5-3 and I’m throwing well.

“The pitch before is 93 miles per hour, I go to make the make the next pitch and Cole Figueroa, who was playing shortstop for Florida, was in the box and I come back, go fastball again and as soon as I go to throw I just feel my hand go to sleep,” he added. “I dropped to my knees and my arm locks up. I just knew it was over then.”

While at Tennessee, Everett posted a 3.23 ERA and an overall record of 8-2 in 49 appearances. He posted an 82/28 strikeout-to-walk ratio and picked up two saves. He set a Tennessee record by appearing in 11 straight games and once pitched in 16 of 23 contests for the Vols.

Everett redshirted and transferred to Lee University in 2010 to finish his senior year, where he posted a team-low 2.03 ERA with a 60/16 strikeout-to-walk ratio.

He was primarily a closer for the Flames, recording eight saves on the season. He posted a 7-6 record on a team that finished 52-13 and placed second in the National Association of Intercollegiate Athletics World Series.

Everett continued to impress MLB scouts despite his setback.

“I put a lot of pressure on myself with it and when looking back, I probably shouldn’t have done that in just being able to relax and play,” he said. “I guess it’s hard for a 21-year-old kid to say, ‘Here’s the dream, and here it is.’ I started having one-on-one meetings with scouts, they were shooting video of me warming up and it was really neat to have that experience. Getting phone calls from various scouts in the area, they were quizzing me and trying to find out what was my mental makeup, what did I think when I was on the mound.”

The Padres stuck with Everett through his collegiate career and offered him a spot with their minor league affiliate Eugene Emeralds.

He quickly experienced the hardships of being a rookie.

“I flew out to Eugene, Ore., and what’s kind of funny is I didn’t sign for a lot of money because I was a fifth-year senior, so you’re not getting much,” Everett said. “I’m making $900 a month playing baseball every day, but it’s professional baseball. I’m living in the Hilton hotel and the high draft pick guys would pay me $40 a load to wash their laundry, and I went out and bought a bicycle and would drive out every morning and wash clothes and be ready for the ballgame that evening.”

Everett continued where he left off in college and recorded the lowest ERA on the Emeralds’ roster. However, he was released the following spring and decided to pursue a different path.

Following his chance in the pros, Everett decided it was time to become a coach and settle down with his family.

He spent a year coaching at Altha High School in Florida before receiving a call from Thompson to return to his alma mater as an assistant coach.

In 2014, Thompson announced his retirement and handed Everett the keys to the historic Redskins program.

“I just decided that it was time for me to do some other things and to quit coaching because I had been obsessed with that for many years,” Thompson said. “Aaron was there, and he was still quite young. He did a good job.”

In his three seasons at the helm, Everett guided the Redskins to 43 wins and their second state tournament appearance. In 2015, the Redskins captured the District 5-2A, Region 3-2A and Class 2A Sectional championships.

Everett was also named the 2015 Class 2A Sectional Coach of the Year.

“It was like a dream come true to get the job at Loudon and become the head coach just because of Coach Thompson to have enough of his respect for him to give it to me,” Everett said. “It’s always kind of a dream for the home boy to come back and to get that job, and I really enjoyed it. I just really loved coming to the ballpark and coaching every day. I really enjoyed the people because they were good to me and supported me. I just tried to work my rear end off for them to try and put a good product out there.”

Following the 2016 season, Everett decided to take the next step and become an assistant at Tennessee Wesleyan University. While there, Everett helped the Bulldogs clinch the Appalachian Athletic Conference regular season and tournament championships and made an appearance in the NAIA Regionals.

Everett continued the next two seasons at Albany State University and the University of Alabama in Huntsville. On Nov. 7, 2019, Everett was named the new head baseball coach at Southern Union State Community College in Wadley, Ala.

Everett adapted quickly to his new role, but his first season was cut short by the COVID-19 pandemic. The Bison were 12-10 when everything came to a halt in mid-March.

“It was me and 54 players, so it was a lot of work at first,” he said. “The players really helped me a lot and we were able to get everything straightened, and we were able to hire an assistant and then move on. We were rolling early in the season, 4-2 in conference, we had a winning record for the first time in a while, we’re doing great and then boom — it all stops. That’s kind of where we are now.”

Everett hopes to compete for the Alabama Community College Conference championship next season.

“We plan on being down here for probably the rest of the career to be honest with you,” he said. “It’s a really good fit. We’ve got a really good support system with my wife’s family and needing help with the three young ones.”

“I think he’ll do a great job, and I think they’re fortunate to have him,” Thompson added. “I think that he’ll work hard at it. He’s got a real great baseball mind, and he’ll do a good job. I have no doubt that he will.”