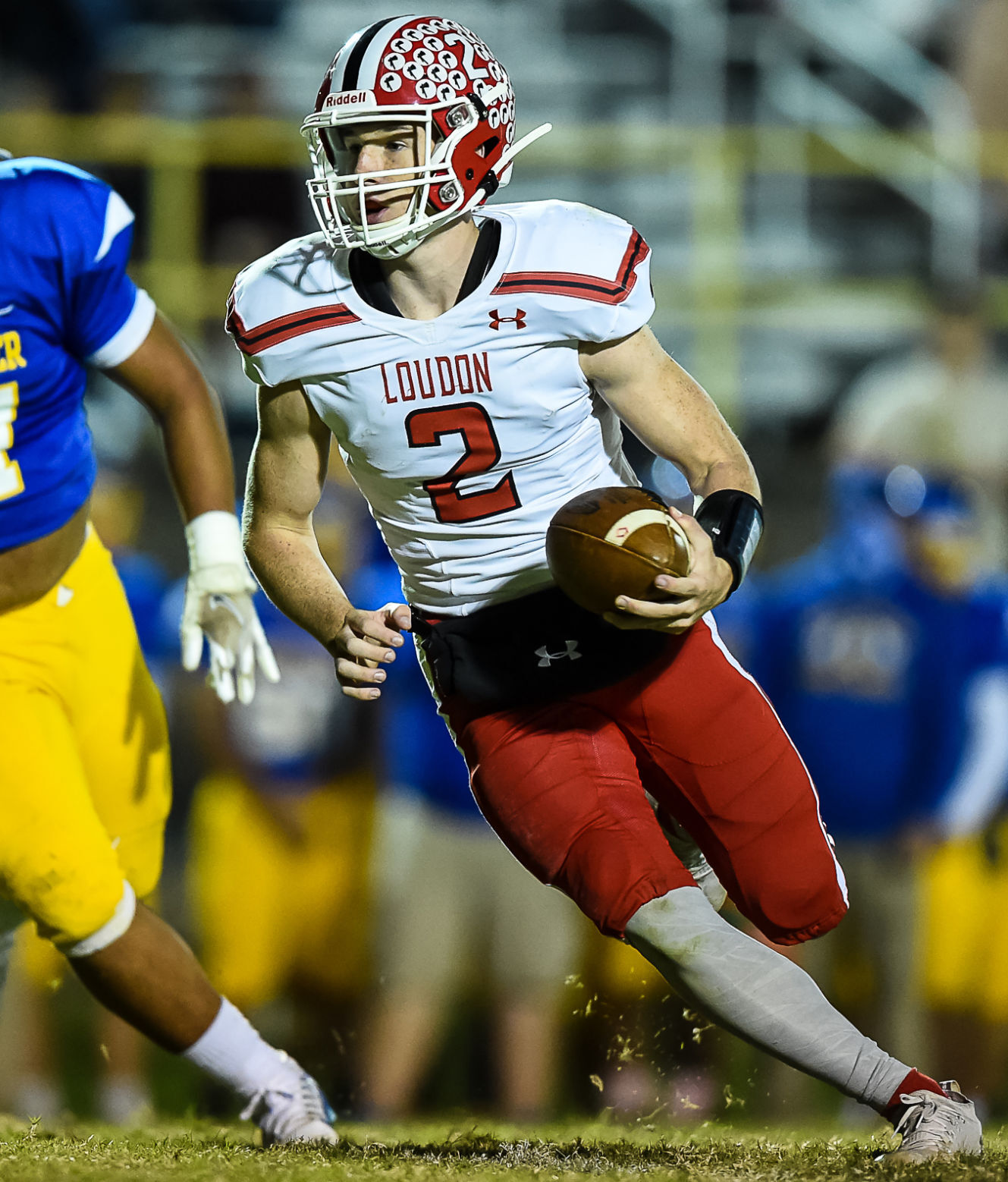 Loudon High School junior quarterback Keaton Harig scrambles for a first down in the Redskins’ 28-7 win over Sweetwater High School. 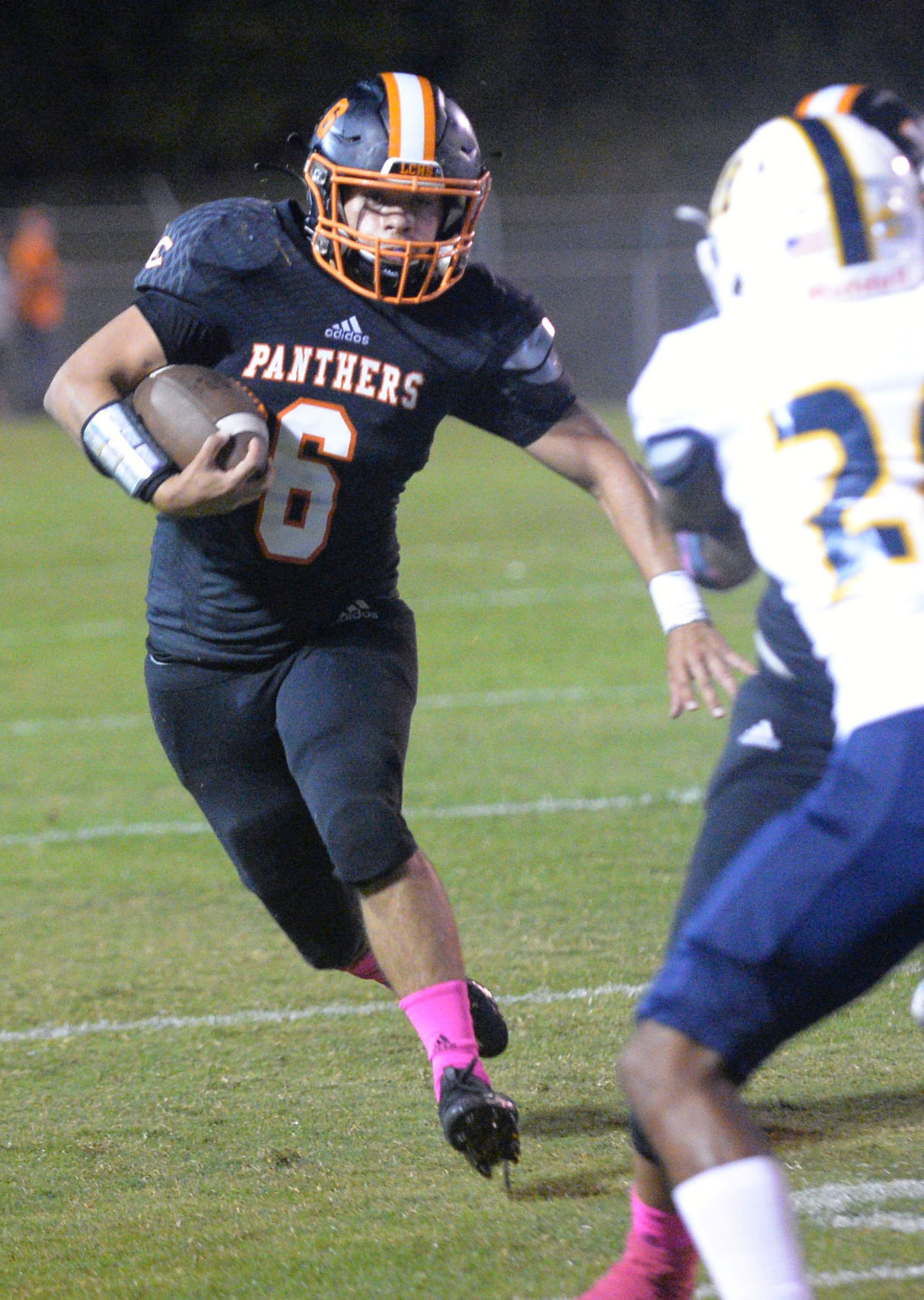 Loudon High School junior quarterback Keaton Harig scrambles for a first down in the Redskins’ 28-7 win over Sweetwater High School.

The 2020 high school football regular season closes Friday, and all three Loudon County teams are hoping to notch one last win before the start of the postseason.

The Loudon High School Redskins (8-0, 4-0 Region 3-3A) were scheduled to host the Walker Valley High School Mustangs on Friday, but the game was called off Thursday due to COVID-19 issues within the LHS locker room.

“We will get what I would consider a fifth varsity lineman back on Thursday coming off COVID suspension, but right now we’re playing with one JV guy as a starter and then another JV guy who’s our sixth man at 160 pounds,” Jeff Harig, LHS head football coach, said. “That’s where we are on our offensive line, and that seems to be the position group that’s been hit the most but everybody else has been pretty healthy. We did lose a linebacker to this latest COVID suspension, which we’ll get back on Wednesday of the first round.”

The Redskins will kick off the most anticipated matchup of the season Friday when the Red Bank High School Lions (6-0, 3-0 Region 3-3A) roll into town with the Region 3-3A championship on the line.

Loudon jumped Red Bank last week in the Associated Press poll to No. 3 in the state in Class 3A, while the Lions are ranked fourth.

Loudon upset the Lions twice last season, but Harig expects the Lions will present the biggest challenge yet with a slew of athletes on both sides of the ball.

“They’re big, they’re fast, they’re physical and athletic just like they were last year,” Harig said. “The thing that I see that’s a difference this year, even though a lot of them are the same players, is they seem to play with a little more passion. Last year I felt like when things got tough, some of them didn’t quite respond to the situation that was at hand on the game field. You can see this group has kind of learned their lesson from that and are playing with much more intensity. They’re a little more run-heavy.”

The keys to coming out with a win Friday includes playing assignment football, forcing turnovers and winning one-on-one battles. Both teams are comparable in terms of total offensive and defensive production.

The Redskins are averaging 40.4 points per game on offense and have given up an average of 7.9 points on defense.

“It’s tough for me right now because we’re trying to put a team together to play when we should be strategizing and scheming how we’re going to be successful,” Harig said. “Anytime you as a coach shift gears from strategizing to surviving, it’s not a good place to be in, especially when you have your two biggest games of the year in front of you. Having lost last week and being presented with this week, it’s a tough spot for us coaches and it’s a tough spot for our players.”

“Last week was the only week we didn’t have any issues with contact tracing, and it was kind of fun having everyone there and being healthy and all that,” he said. “Contact tracing is going to take a few guys out for 14 days, but I think mentally the guys feel good. We’ll just rally the troops, circle the wagons and get after William Blount.”

The Panthers will be on the road Friday for the final regular season game against the William Blount High School Governors (3-6, 1-5 Region 2-6A).

The Governors will look to snap a three-game losing streak after getting outscored by a combined 139-36.

“This is my 10th year coaching against William Blount and they’re big kids, rangy athletes, a quarterback that can throw the football and excellent running backs,” Cortez said. “They’re just stuck in a tough situation in terms of they’re 6A and playing the Maryvilles and Bradley Centrals of the world, so to me they’re always a solid high school football team with good athletes. We’ve got to contain No. 6 as a running back and contain No. 10 and 14 from catching the ball and sack the quarterback. For us, this will be the first week we’ve seen a four-man front.”

Without an opportunity to compete in the playoffs, Cortez believes William Blount will come out swinging in the final game.

“It’ll be an interesting game for us because we’re coming off a good high and William Blount doesn’t have anything to play for but pride,” Cortez said. “We’ve just got to learn to keep moving forward and just have that positive mental attitude and just go play football. Our guys will have the chance to do that for one more week, and that’s a blessing.”

nback gaining confidenceAfter not playing a game in a month, the Greenback School Cherokees (3-4, 3-1 Region 2-1A) bounced back in a major way Friday with a 34-0 shutout over the Midway High School Green Wave.

“Us not being able to play that long, it really made us think that we can’t take our season for granted,” Colton Alexander, Greenback senior lineman, said. “With COVID and all that going around, we didn’t know if we were actually going to get to have the rest of the regular season. Once we found out we were actually going to get to play, that just absolutely fired us up and were just ready to get out there and play. It was probably the best week of practice we’ve had all year.”

Greenback struggled out of the gate on both sides of the ball in the first four games but flashed potential against Midway with 357 total offensive yards and 167 yards given up on defense.

“It felt good to definitely get the win, and we had really two good weeks of practice,” Blake Fields, Greenback senior receiver, said. “We were just executing, and I just felt like where everybody was at it was just better. When we played Oliver Springs, we just mixed and matched people and put people in different places and we didn’t have Colton. The coaching was just really good throughout the week.”

In a season full of uncertainty and forfeits, the seniors have stepped up to encourage underclassmen to stick with the process.

“The season as a whole, I mean it’s just been different compared to what I’ve been used to,” Alexander said. “It’s been rough and we had those two first losses to Loudon and Meigs County, which are two really good teams. After that, we got a region win off Sunbright because of COVID and then we played Oneida, which then I was sadly injured. I was just ready to get back and then got sent out for exposure, so it was just really frustrating — that’s all it really is at this point.”

The Cherokees will host a much-improved Oakdale School Eagles squad Friday for the final Region 2-1A matchup of the season. Oakdale is 5-4 overall but only has one region win over Harriman due to COVID-19.

Fields is confident in the Cherokees’ ability to dominate the Eagles in all three phases of the game.

“I feel like our matchups are pretty good,” he said. “I actually played with two kids on their team at William Blount, so I know them pretty well. I played with their quarterback, and he’s pretty big. He’ll throw some, but their main thing is the read option and QB sneak. Overall, I think our line and receivers and all that are just overmatched against them. We’ll just see how it goes Friday.”