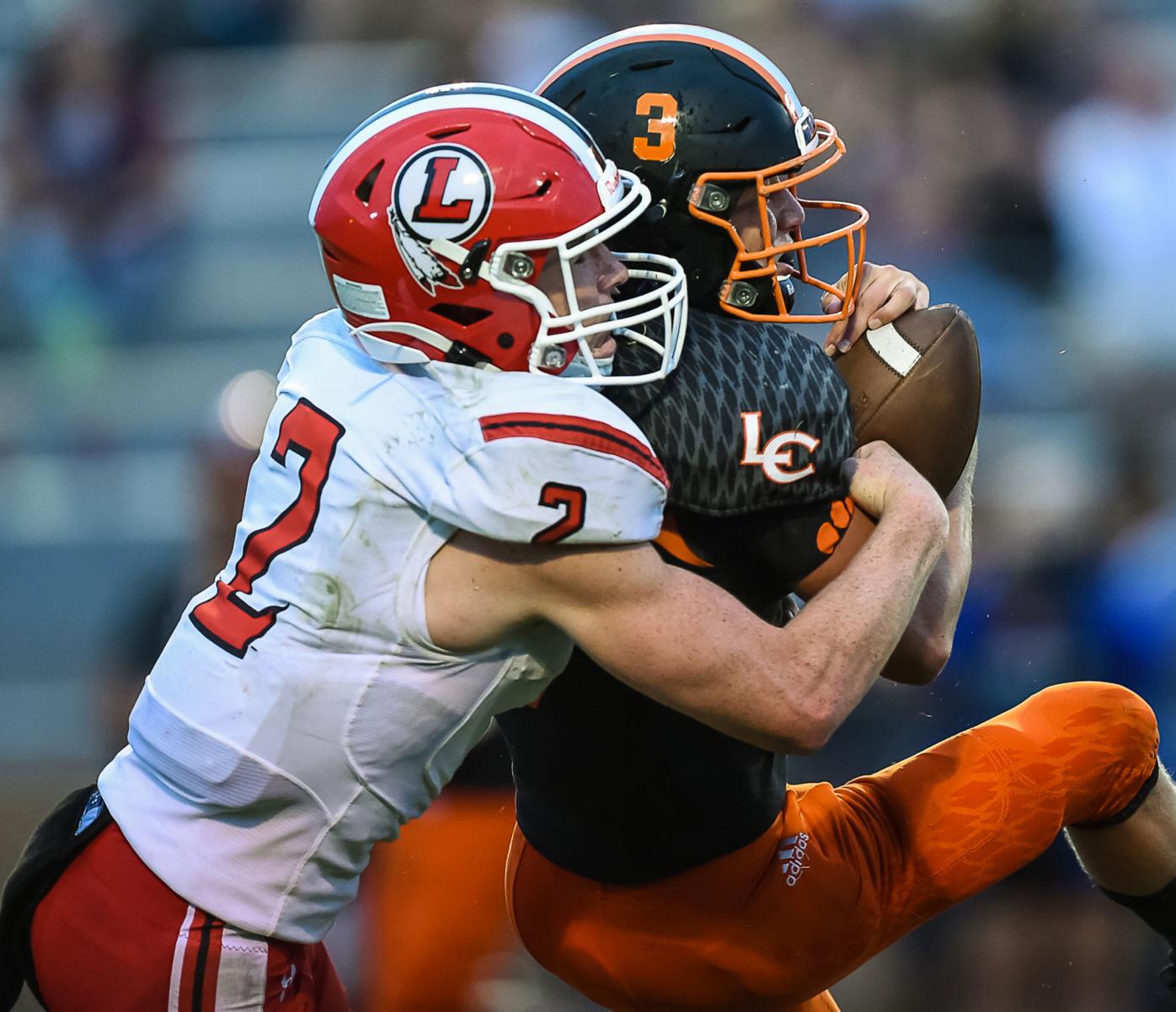 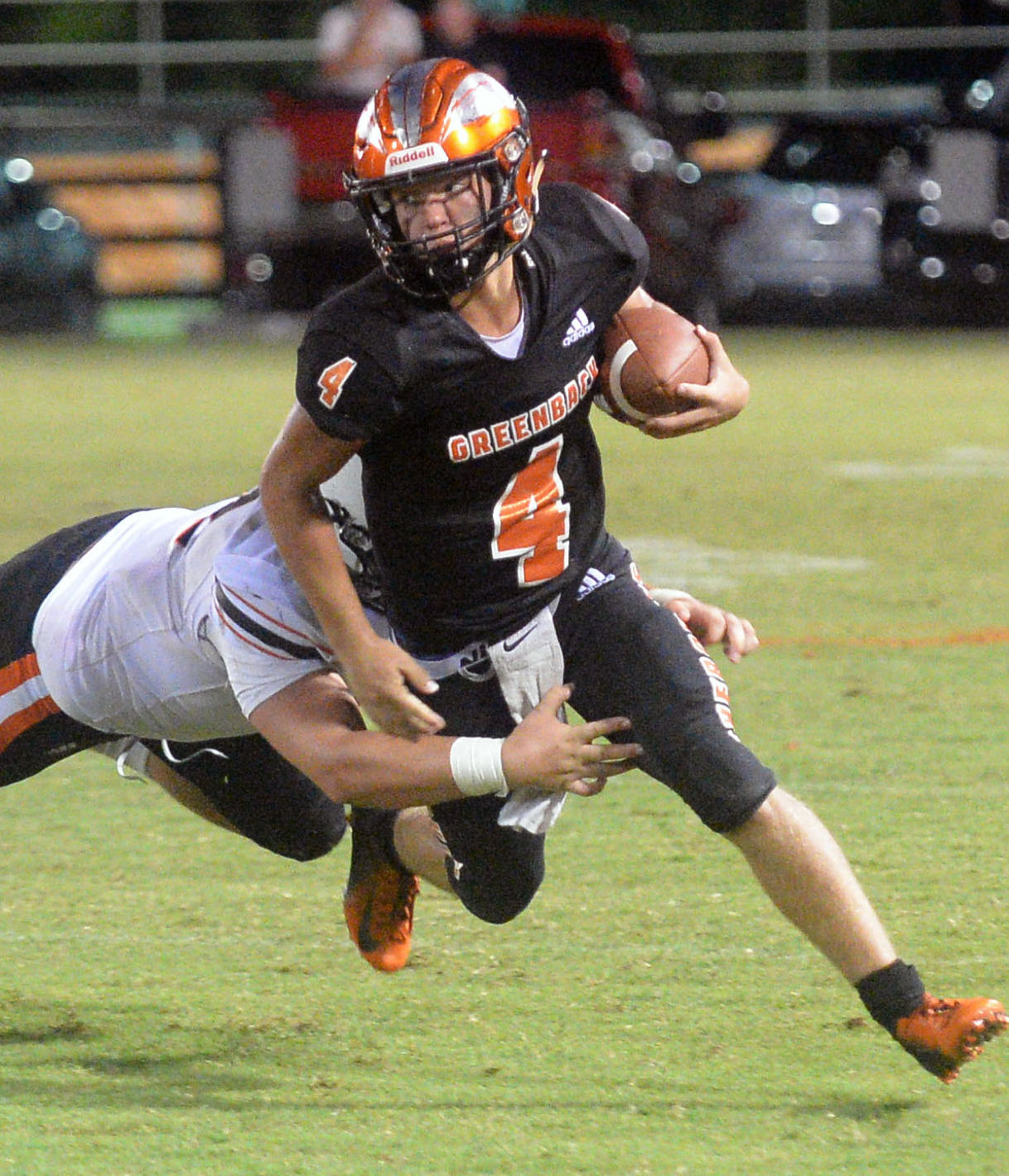 Greenback School quarterback Brennen Duggan scrambles for a first down Friday in the Cherokees’ 38-0 loss to the Meigs County High School Tigers.

Greenback School quarterback Brennen Duggan scrambles for a first down Friday in the Cherokees’ 38-0 loss to the Meigs County High School Tigers.

The 2020 high school football season is off to a hot start, and two Loudon County teams are gearing up for their first region tests Friday night on the road.

The Loudon High School Redskins (2-0) are riding high following a dominant 44-10 win over the Lenoir City High School Panthers in the 94th annual Battle of the Bridge rivalry.

“A lot goes into those Loudon County rivalries and some would say that’s basically our season, so rallying the troops now to shift our focus to be region champs maybe for some doesn’t carry the weight of being the Loudon County champions,” Jeff Harig, LHS head football coach, said. “For us, it’s an emotional two weeks. You always worry about a letdown going into this next one but our kids love football and they love to compete. Maybe Monday blues, they won’t be here by Friday. We’ll be ready to go.”

Loudon will open Region 3-3A play Friday on the road against a talented Brainerd High School Panthers squad (2-0). The Panthers are coming off big wins against Hixson and Howard.

“They are much improved, and it’s amazing because success builds confidence,” Harig said. “Their guys are playing with confidence of they’ve been better than their two opponents, which is a big step for their program because I think they got beat by four or five touchdowns against Howard last year. They’re doing a much better job, their schemes are fitting together to match their talent and so this will obviously be the biggest challenge we’ve faced so far this year.”

Questions surrounded the Redskins’ offense coming into the season following the graduation of several All-Region caliber seniors, but Harig still has plenty of explosive power at his disposal.

Junior quarterback Keaton Harig has combined to pass for 324 yards and four touchdowns in two games, while tailbacks McKenzie Lunsford and Donte Brown have provided a dangerous mix of speed and power in the backfield.

Keaton said the team is riding on momentum but could be in for a battle at Brainerd.

“We’re very confident and just won the county championship, so I think everybody’s confident and we’re feeling good,” he said. “There were a few guys on film that I didn’t recognized from last year, so (Brainerd) either got new guys or they’ve just gotten a lot better, but they look like the real deal.”

Jeff believes the Redskins will match well across the board with the Panthers but does have some concerns about Brainerd’s explosive ability.

“They’re a one-play touchdown drive so our guys can be perfectly positioned but if there’s one missed tackle, one miss-timed jump, their guy will jump over us, will make us miss and take it to the house,” he said. “Brainerd’s always had that big-play capability. Where their success will be determined, I think, for the length of the game is how well they match up with our offensive and defensive lines because they’ve not played somebody as good as we are, but at the same time we’ve not played anybody as athletic as they are.”

hers eye first winThe Lenoir City High School Panthers (0-2) have moved past the tough 44-10 loss to Loudon and are fixing their sights on starting 1-0 in Region 4-5A play.

“I thought (Monday) was a good start and we’re heading in the right direction,” Jeff Cortez, LCHS head football coach, said. “The kids were positive and listened to the next game plan to get ready for Soddy Daisy, defensively and offensively. The kids were excited to just hear about the new game plan, begin to implement the new game plan. Although we wanted to be 2-0, those don’t matter in terms of our goals, and that’s to win region, host a playoff game and win a playoff game.”

The Panthers will travel Friday to take on the Soddy Daisy High School Trojans (0-2). Lenoir City is 2-1 overall against SDHS since the last reclassification.

“We do know after three years that they’re well-coached on offense,” Cortez said. “They’re a high-tempo, fast team. This is the fastest team we will see all year. The flip side of that is they’re fairly basic with formations, so you don’t have to worry too much about multiple formations. We know they’re a fast-screen team, inside zone and outside zone on offense. For us, we’re fairly confident about what we need to take away and the way in which we need to do it.”

Cortez thinks the team is starting to settle down after two games and believes the Panthers will be ready for what the Trojans will present on both sides of the ball.

“I thought (Monday) was an excellent practice for us offensively because our guys were attentive to details, and I thought our film session went really well,” he said. “I think there’s a lot of positives, and not having the opportunity to scrimmage Karns this year and have a jamboree ... so these first two games have given us opportunities to make some changes that we would’ve made after a Karns scrimmage. I was highly pleased with our response.”

nback offThe Greenback School Cherokees football team is licking its wounds from a 38-0 defeat by Meigs County High School for the second consecutive loss to start the season.

“Meigs County’s a really good football team that’s really well-coached, but we had an unfortunate week where we were down a couple of linemen,” Greg Ryan, Greenback head football coach, said. “We weren’t happy with the outcome, but we saw a lot of good things. We’re playing 27 guys both offensively and defensively, and that’s without a doubt at least 10 more than I’ve ever played in my six years as head coach. ... There’s a lot of kids on this team that are going to be really good football players, but they’re just not there yet.”

The Cherokees were scheduled to take on the Sunbright School Tigers on Friday to open Region 2-1A play, but the game was called off Monday due to at least one positive COVID-19 case within the Sunbright program. The Tigers did not compete Friday against Pickett County due to a confirmed positive test on the team.

According to Tennessee Secondary School Athletic Association’s COVID-19 contingency plan, Greenback should receive an automatic win and Sunbright will receive neither a win or loss. However, Ryan said Monday afternoon that the team is awaiting confirmation of an official ruling from TSSAA.

“I don’t know exactly what’s going to happen with that until we talk to TSSAA and find out what the rules are, especially with that being a region game,” Ryan said. “We’re looking to see if there’s somebody out there that’s looking for a game, but as of right now, there’s nobody that’s local enough. We’ve heard from a couple of teams, but we’re not interested in driving three hours anywhere. Right now with what’s going on, it’s hard to find anybody who’s possibly got a situation where they can’t play.”