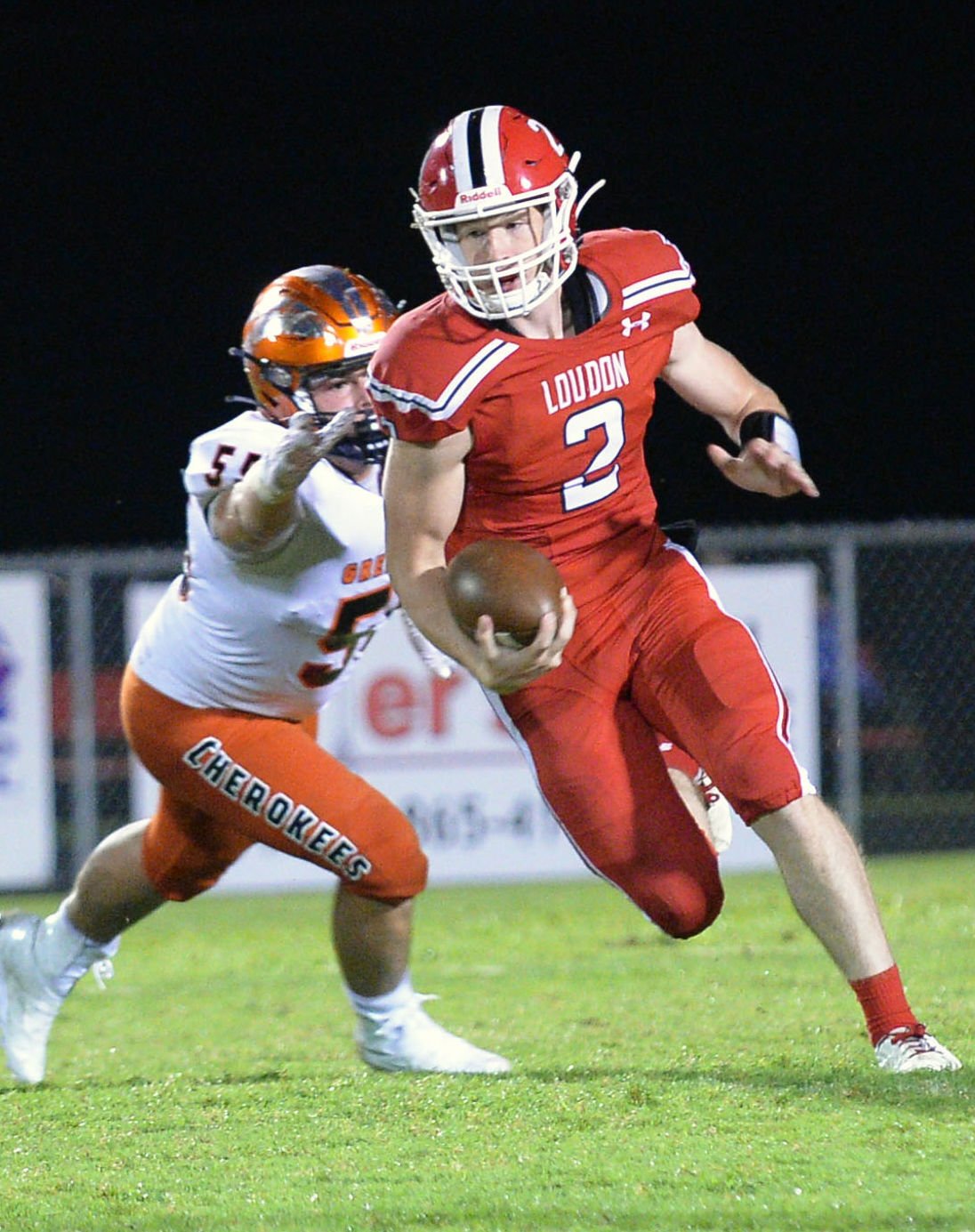 Loudon High School junior quarterback Keaton Harig scrambles for a first down Friday in the Redskins’ 41-0 win over the Greenback School Cherokees. 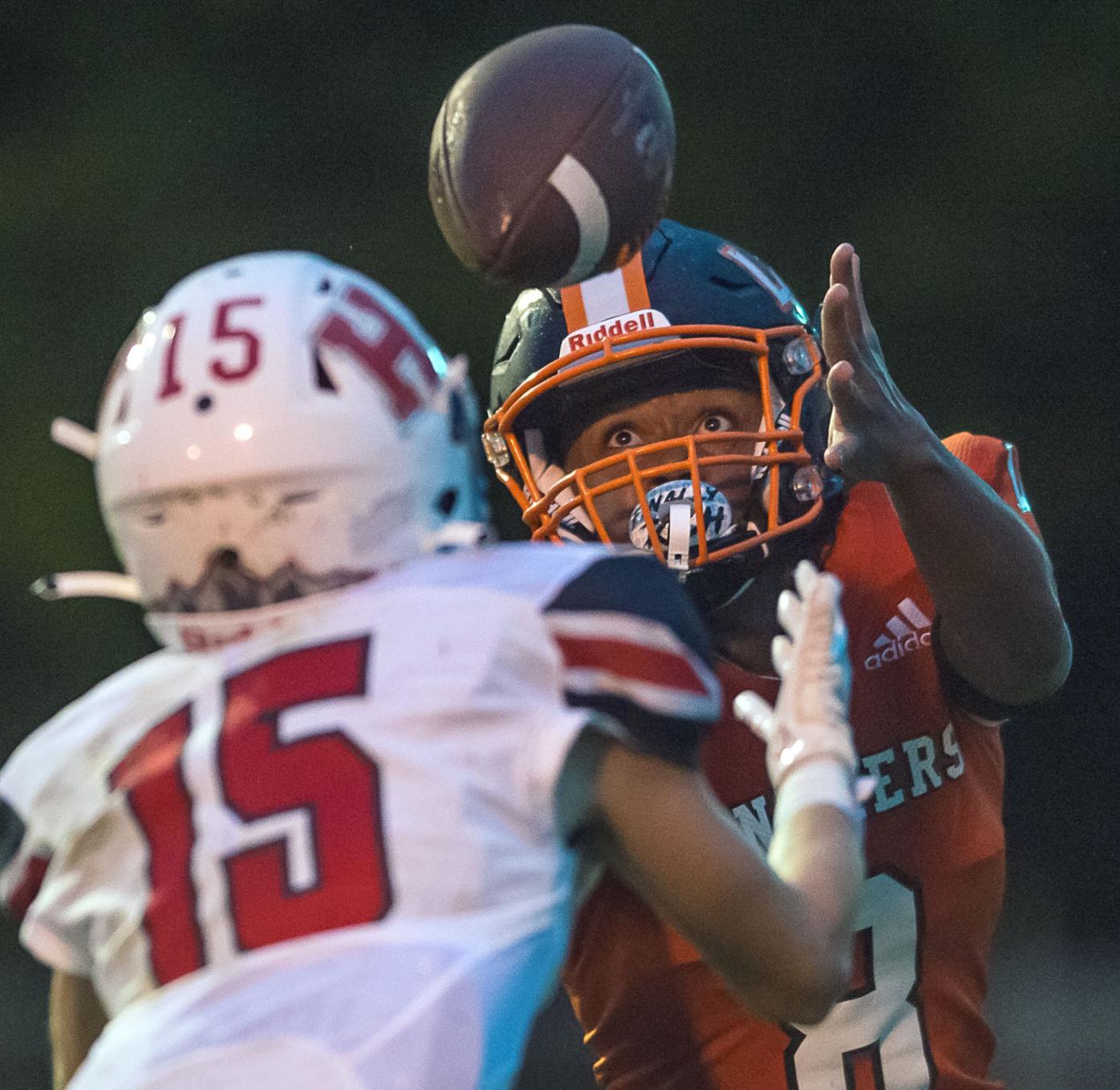 Loudon High School junior quarterback Keaton Harig scrambles for a first down Friday in the Redskins’ 41-0 win over the Greenback School Cherokees.

Only eight miles and the John J. Duncan Jr. Loudon Veterans Memorial Bridge separate Lenoir City and Loudon high schools, but for one week out of the year, a deep-rooted rivalry divides the community.

Friday night will mark the 94th anniversary of the Battle of the Bridge between the LCHS Panthers and LHS Redskins, which is the second-oldest high school rivalry in the state.

Loudon head football coach Jeff Harig has coached in the game for 24 of the last 26 years.

“To me, rivalries are what create the greatness of high school sports,” Harig said. “To me, this is as good of a rivalry as there is in East Tennessee, and it’s what makes football fun for us. A lot of players have left their legacy in this game, and so we’re just going to treat it special, celebrate it and talk about it year round.”

The two teams first met in 1923, and Loudon won 14-0 in the first game of the inaugural series in 1926. Loudon leads the rivalry with a 51-42 overall record against the Panthers.

The rivalry name was adopted more than 20 years ago when a series of pranks from students went too far. In spring 1995, student councils from both schools decided to come together to redirect the energy toward helping those in need in the community with an annual canned food drive contest for Good Samaritan Center of Loudon County.

“It’s a fantastic football game every year, just the electricity in the air and the opportunity to have a rival and have them be so close to each other,” Jeff Cortez, LCHS head football coach, said. “A lot of our guys know their guys and vice versa, and so it’s a big football game. One of the aspects that I love about the game is the food drive. For us to be able to help out our own people that have so many needs, especially this year with COVID and family situations, I think the food drive part of is more important this year.”

The Redskins overwhelmed the Greenback School Cherokees 41-0 in the season opener and will look to defeat the Panthers on Friday for a second consecutive county sweep.

“I think Friday was a good start, and it gave our guys a lot of confidence that the things that we’ve been working on and the on-purpose things that we’ve been doing are actually working up there,” Harig said. “What happens then as a coach as you really start emphasizing those things even more, the buy-in becomes greater and greater. The more success you have, the more buy-in you have, the better your team becomes and I think we have an identity. I thought we played to it Friday night in all three phases of the game, and so what we’ll do is keep trying to establish our identity and search for success on Friday night.”

For the Loudon seniors, this is the one game on the schedule that matters above all else.

“I think Lenoir City, it’s one of those weeks where your athletic ability isn’t really tested because it’s more of your will, your heart and your competitiveness,” Devan Nichols, LHS senior linebacker, said. “Everybody makes mistakes and it’s a big game, so you’ve just got to play through it.”

“I think if we take care of business, then I think we should go out there and get the win,” Jackson Williams, LHS senior receiver, added. “I just want to beat them. It’s the Battle of the Bridge, and I want to win always. We lost to them my sophomore year, but I want to go out for senior year and beat them.”

Lenoir City came up short in a tough 21-7 loss to the Heritage High School Mountaineers to start the season, but Cortez said the team is itching to pick up a big win against “the team across the bridge.”

“The beautiful thing is it’s Loudon so there isn’t too many buttons that we have to push or magical words to say — we’re going to rise up to the challenge no matter what,” Cortez said. “This isn’t the first time we’ve gone into the Loudon game 0-1, so again, we know we’re going to play hard. I think the great part of the Heritage game is we got to play somebody other than ourselves, and we can learn so much from that game. There’s six snaps we want back desperately, and that accounts for about 21 points and 150 yards.”

Both head coaches are quite familiar with each another after squaring off seven times in the last 10 years.

“You can give titles out, but Coach Cortez’s footprint is all over that defense because he’s always been a 3-4 guy, brings pressure, likes to play those four deep guys to eliminate big plays,” Harig said. “The biggest thing I saw was I saw a Lenoir City team who played very well defensively. Offensively, they just didn’t take advantage of their scoring opportunities. I’m sure that’s the message he’s selling to his players, and I fully expect them to be ready.”

The Redskins capitalized on big plays against Greenback, including a 94-yard kickoff return by McKenzie Lunsford and 80-yard fumble return for a score by Semy Turner. Junior quarterback Keaton Harig went 10-of-12 through the air for 157 yards and three touchdowns but also rushed five times for an additional 87 yards.

“Offensively, we match up very well,” Cortez said. “We do have to be mindful of Keaton. One game’s one game, but he looked like the best player on their offense. Obviously, I’m very aware of Lunsford and his speed. We know Semy’s going to be special, but Keaton appeared to be the guy. Lunsford and Semy have excellent speed, probably faster than anybody at Heritage, so that will present a challenge for us.”

“Defensively, it’s a Jeff Harig defense that’s tough, physical, assignment driven, excellent tackling from the secondary,” Cortez said. “From an execution standpoint, we’ve got to be squared away with where’s (Haden) Houser coming from, are we picking No. 15 on the extra blitz, are we communicating up front, is our quarterback going through the check down. It’s always fun playing Loudon and getting ready for the game.”

Clevenger was a freshman the last time the Panthers defeated the Redskins, and he hopes to flip the outcome in Lenoir City’s favor Friday.

“This is one of the hardest working weeks and is definitely one of the most important games to us,” Clevenger said. “We’d like to come out with the win. We’re hoping to score a lot more, get more first downs, turn it over less and get less interceptions. We feel pretty confident, and I think we’ll put up some numbers.”

The News-Herald, in conjunction with Lenoir City Utilities Board, is holding the fifth annual Battle of the Bridge Twitter photo contest through 5 p.m. Friday. Players, students, faculty and fans from both schools are encouraged to tweet photos of themselves showing off their school pride to the News-Herald Sports account. For more information, visit News-Herald Sports Twitter account.