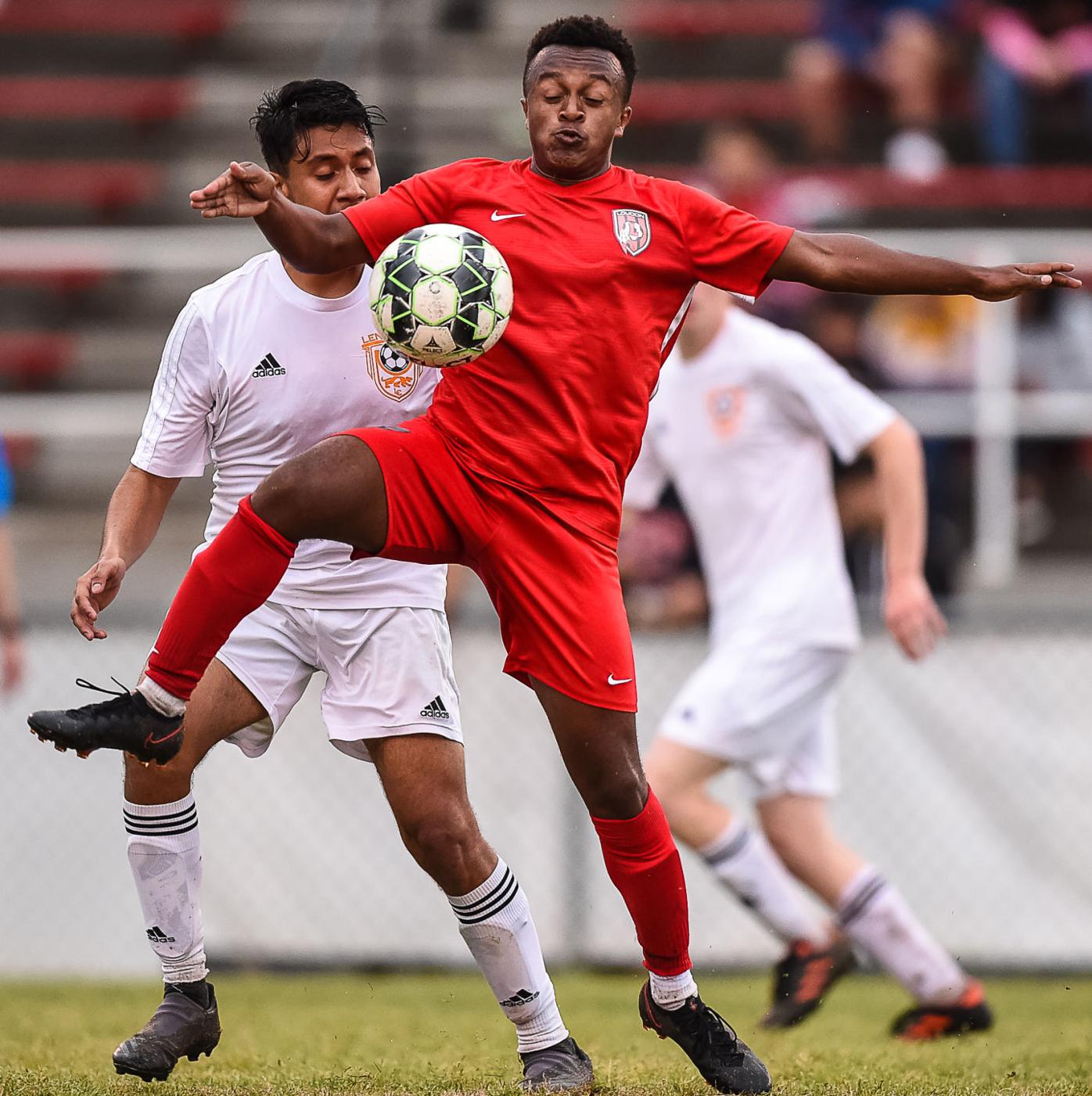 Loudon High School senior Cherinet Feezell was named the District 5-2A Most Valuable Player after totaling 24 goals and four assists. Feezell is also the 2021 All-County Player of the Year. 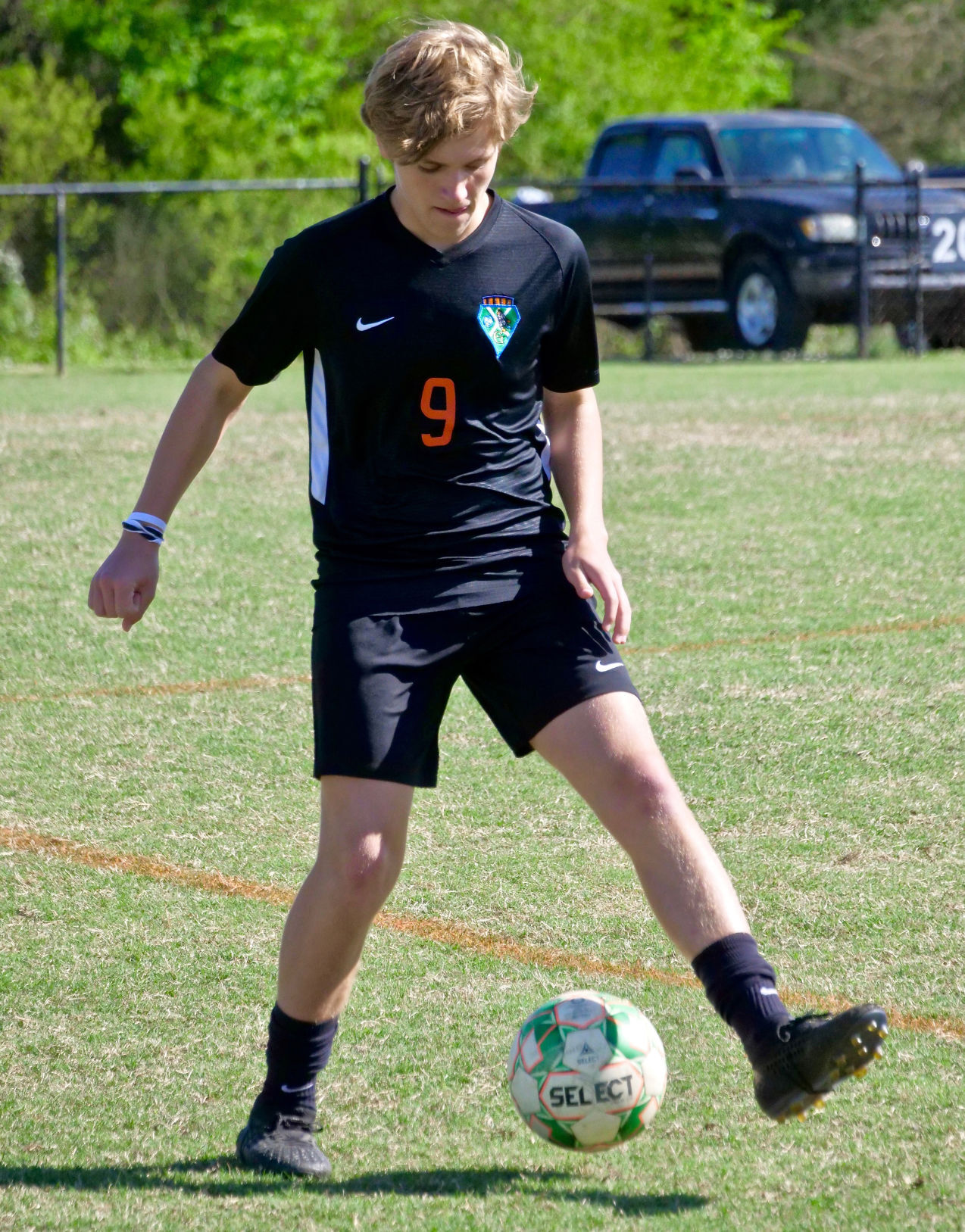 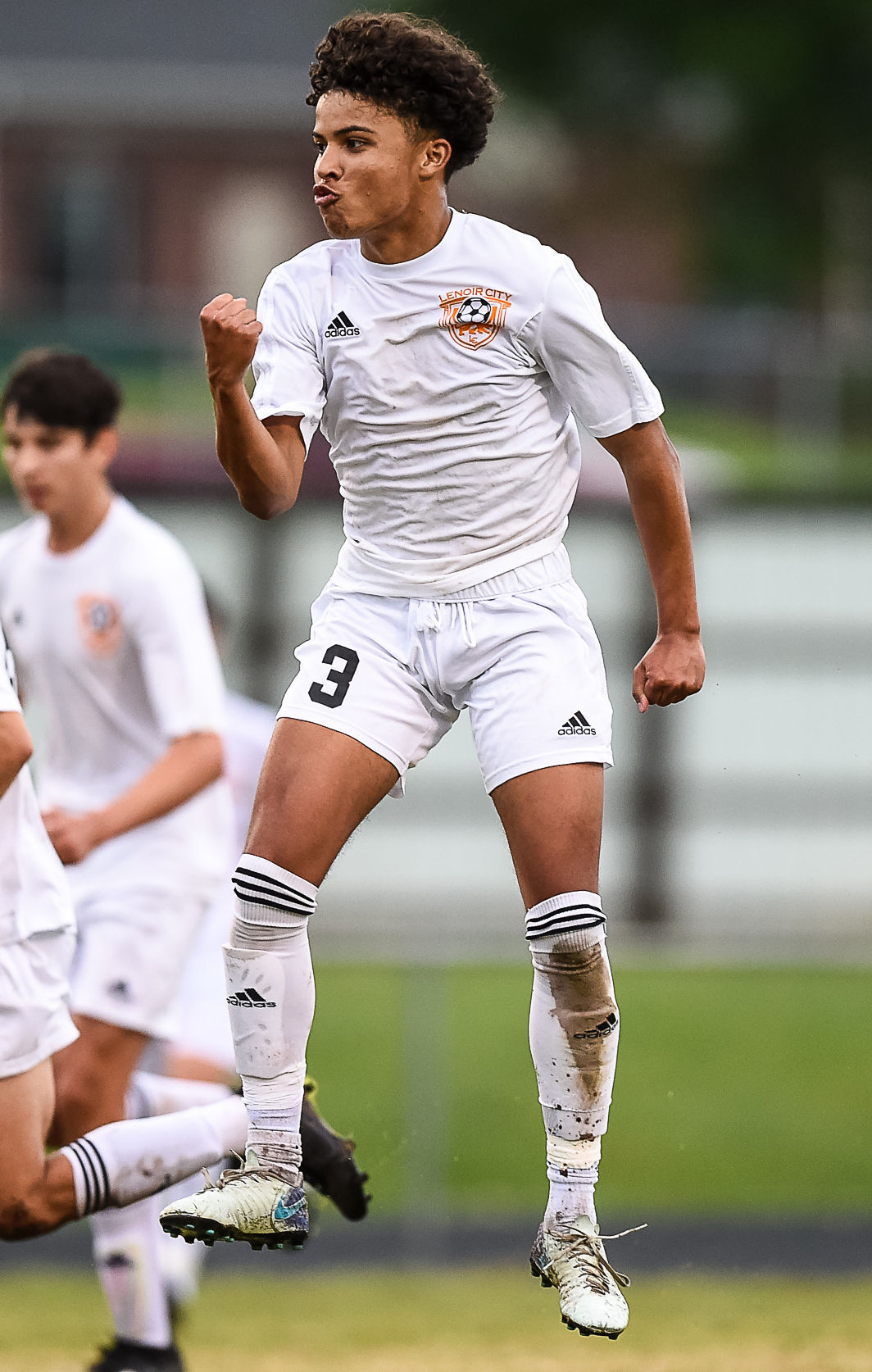 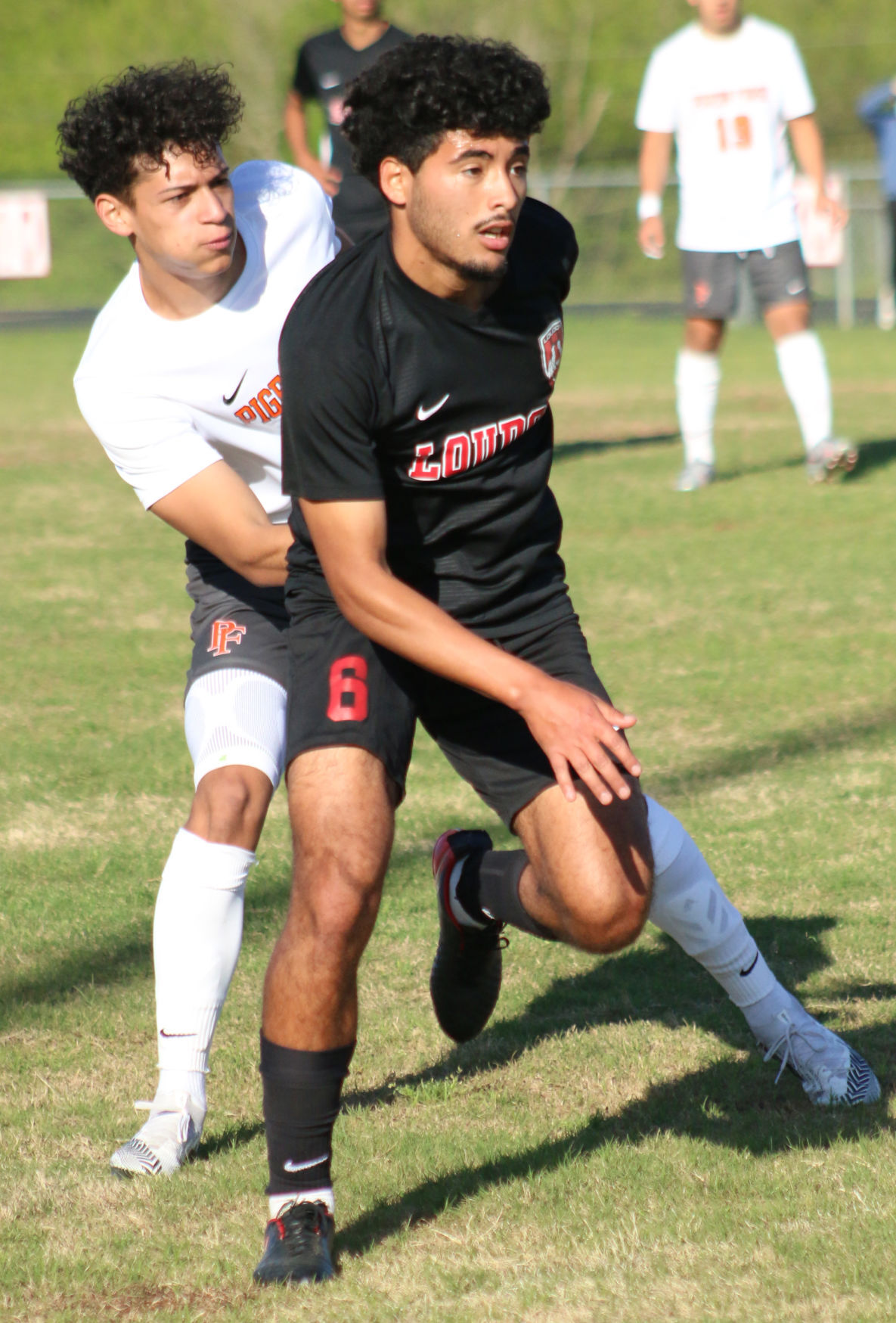 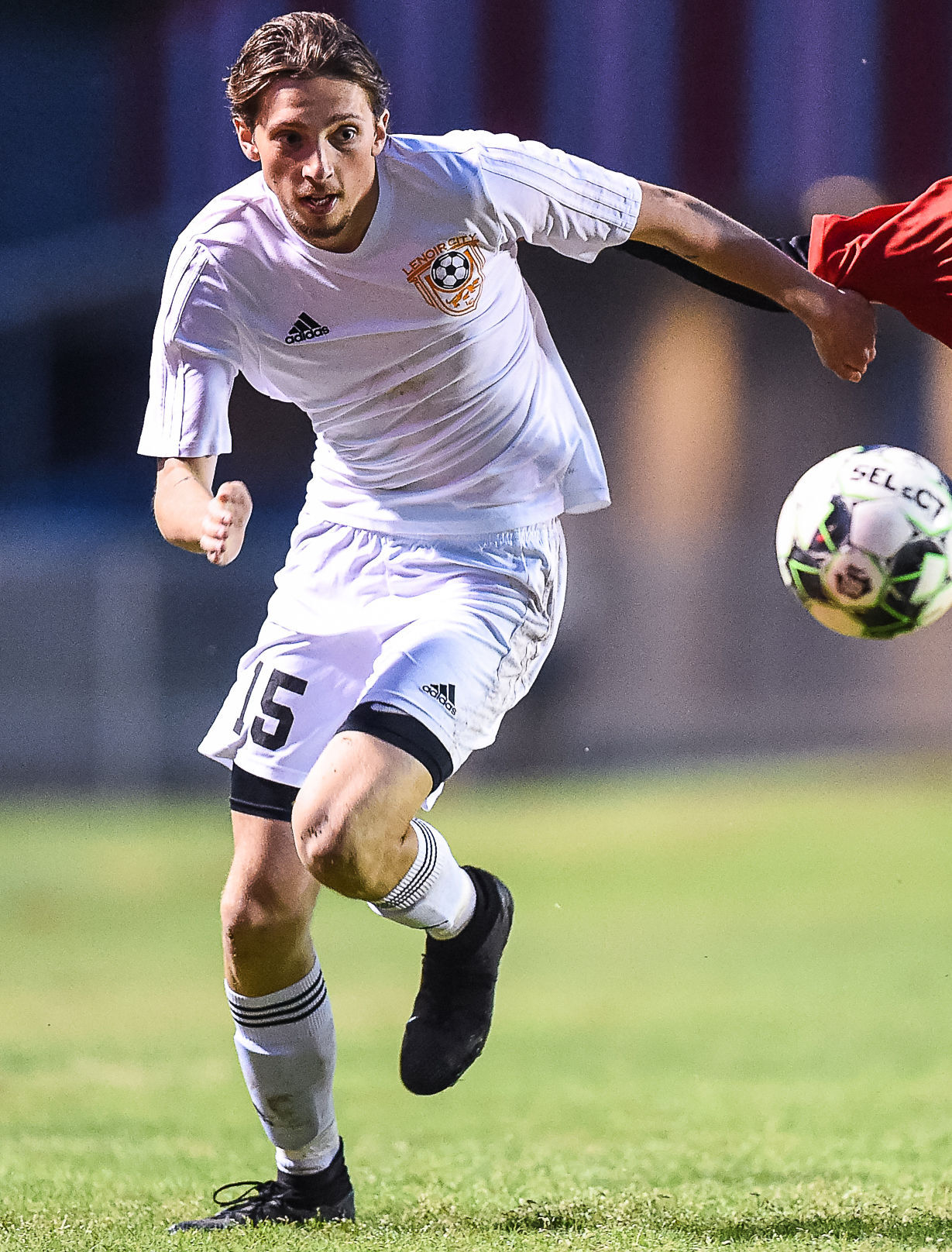 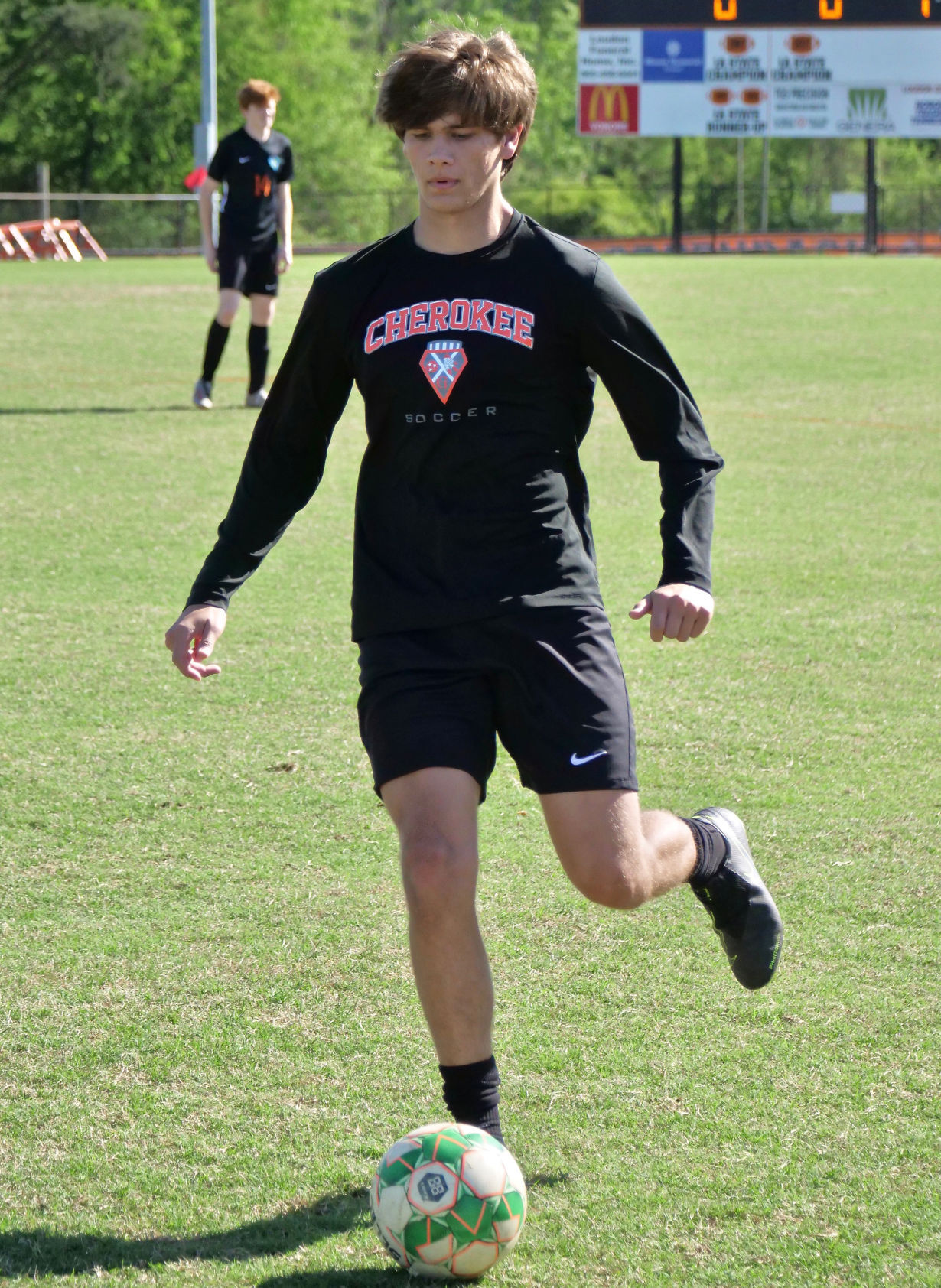 Greenback School junior Noah Pifer passes the ball in warmups prior to a match against Heritage High School. 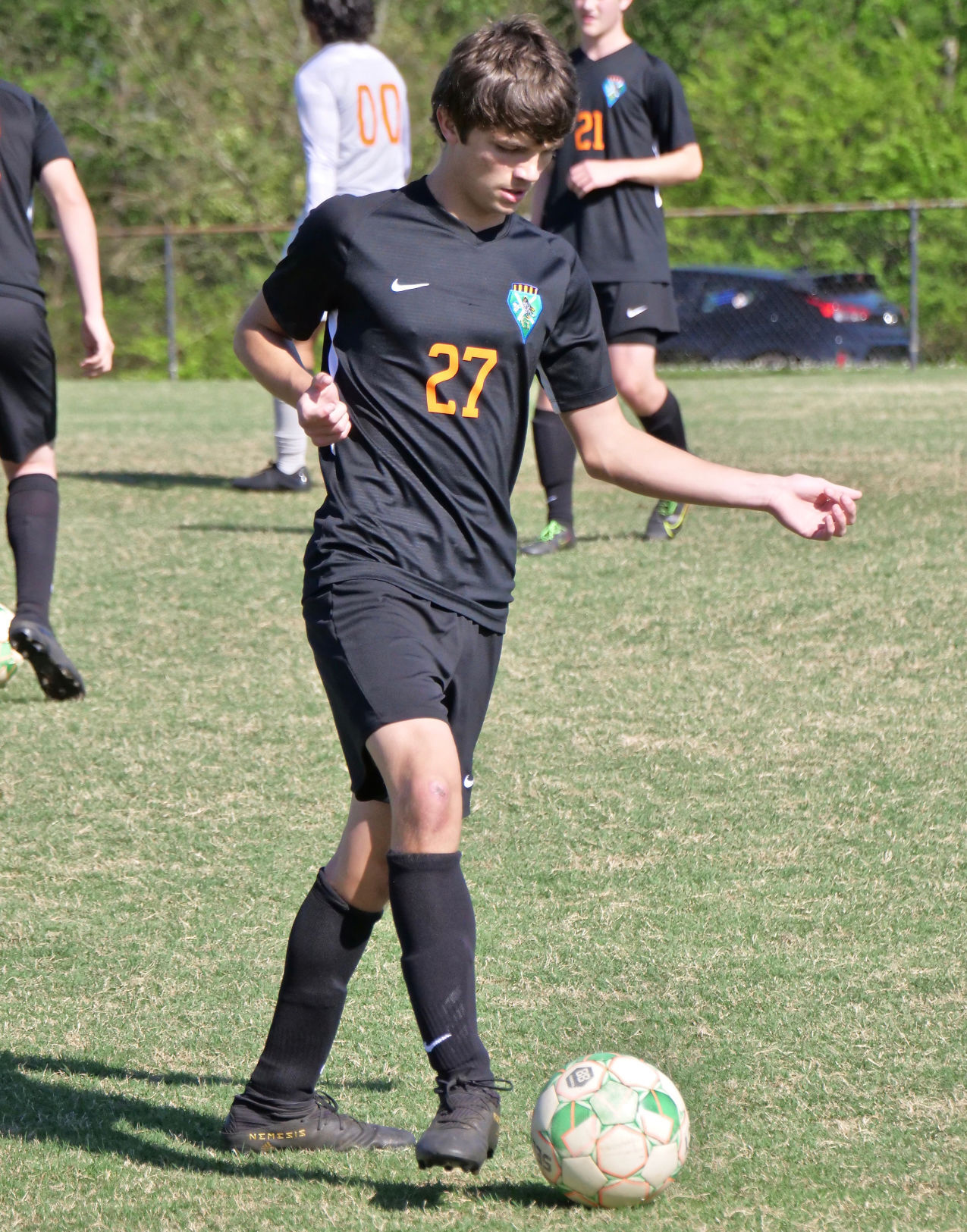 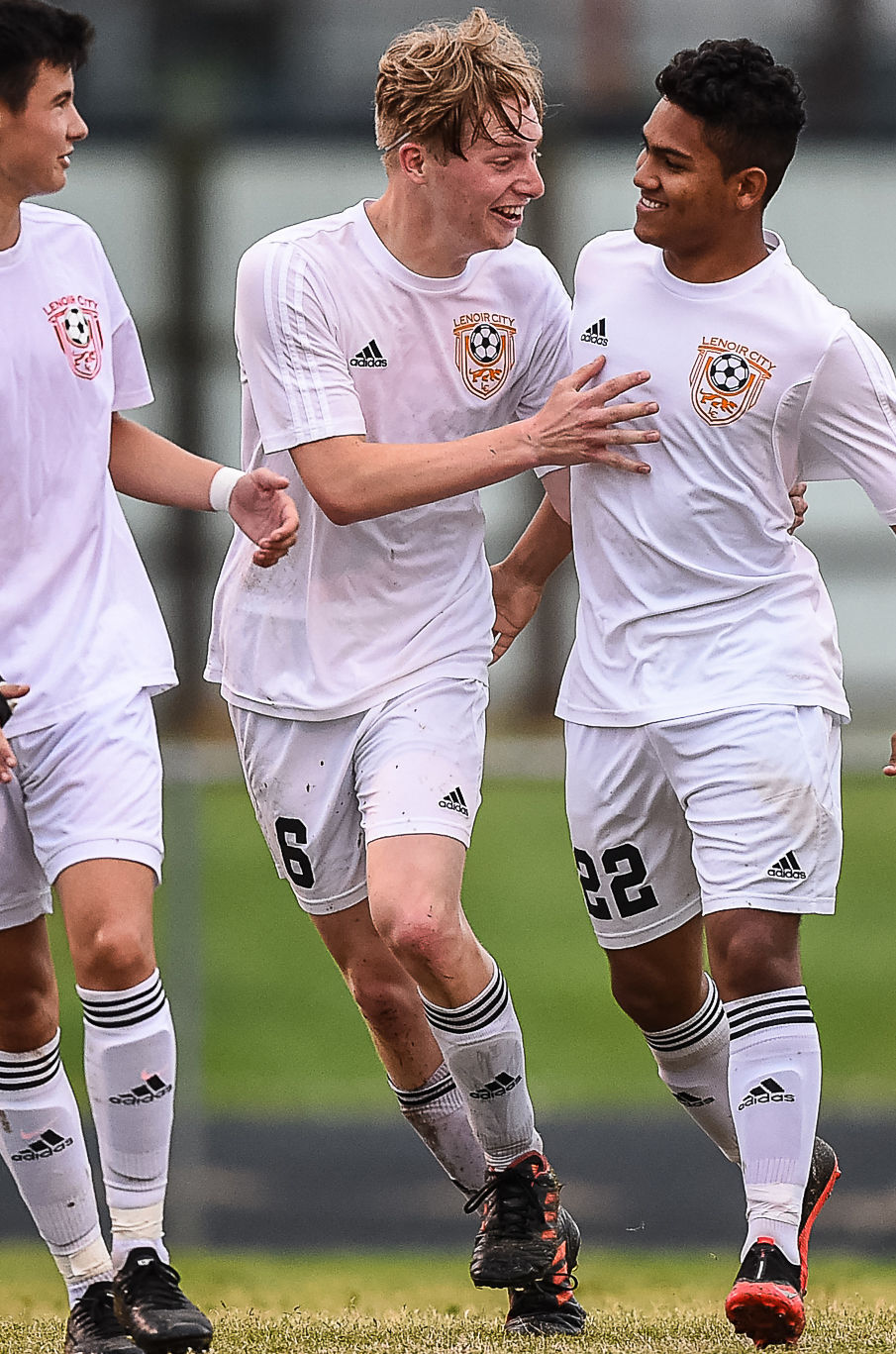 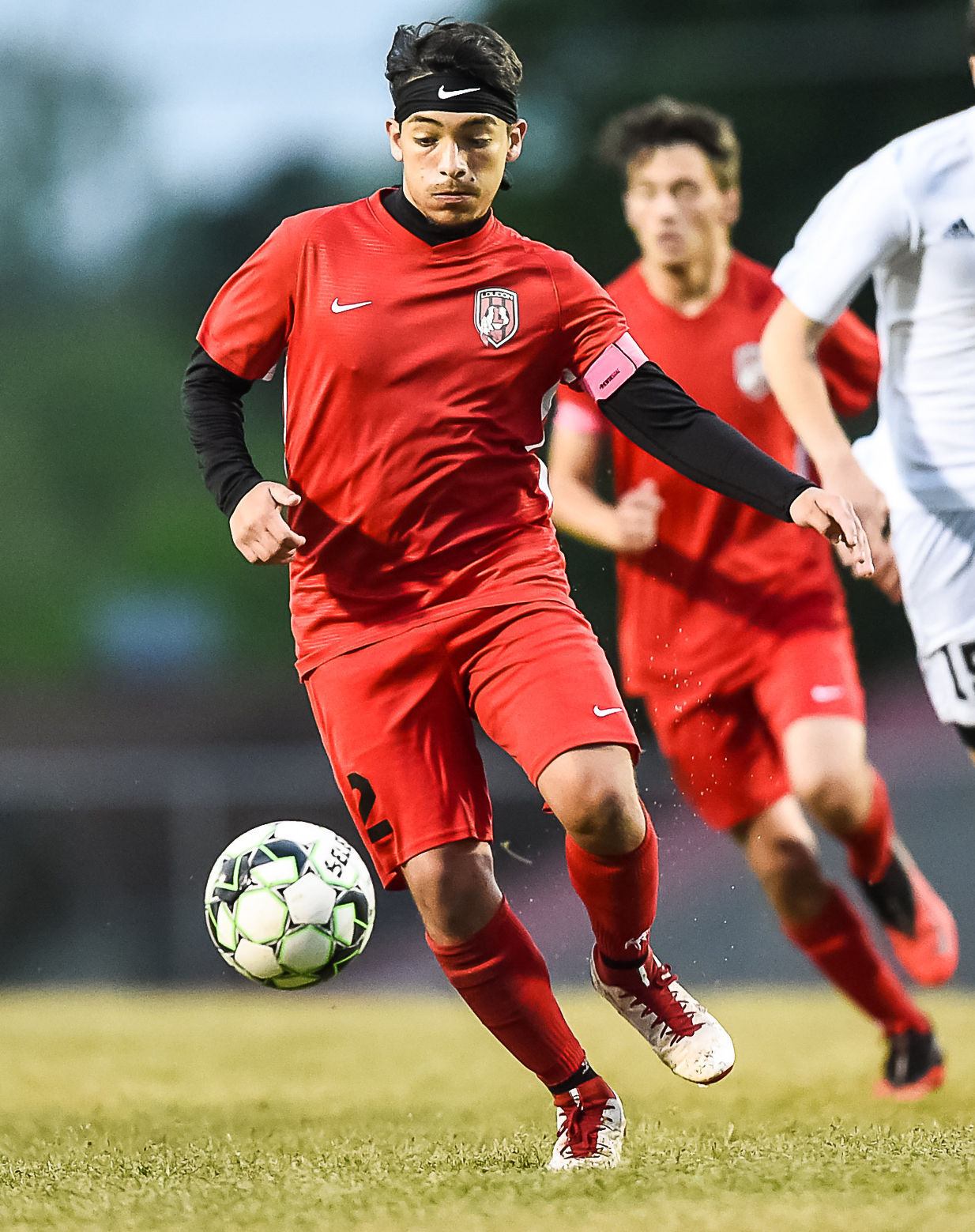 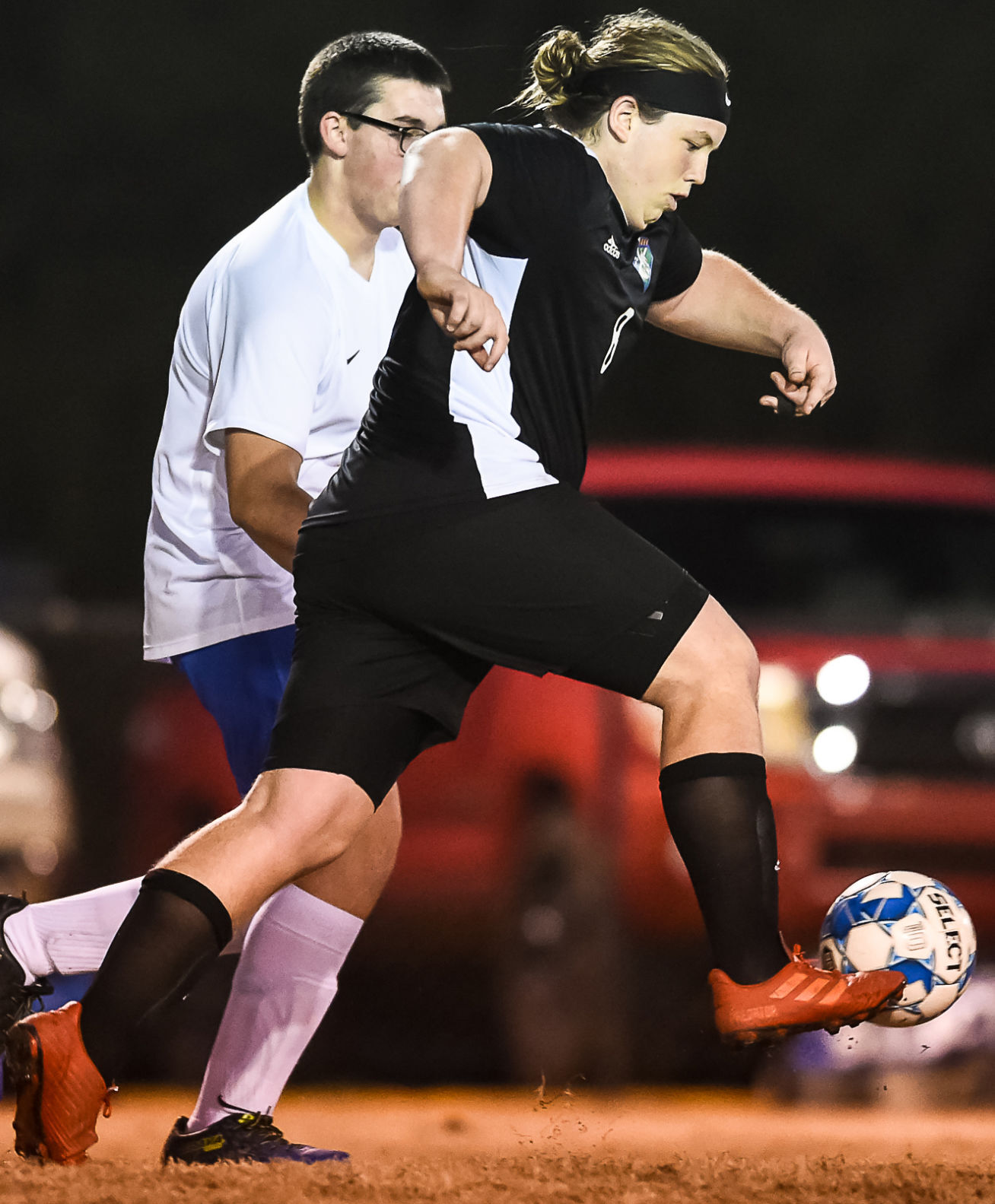 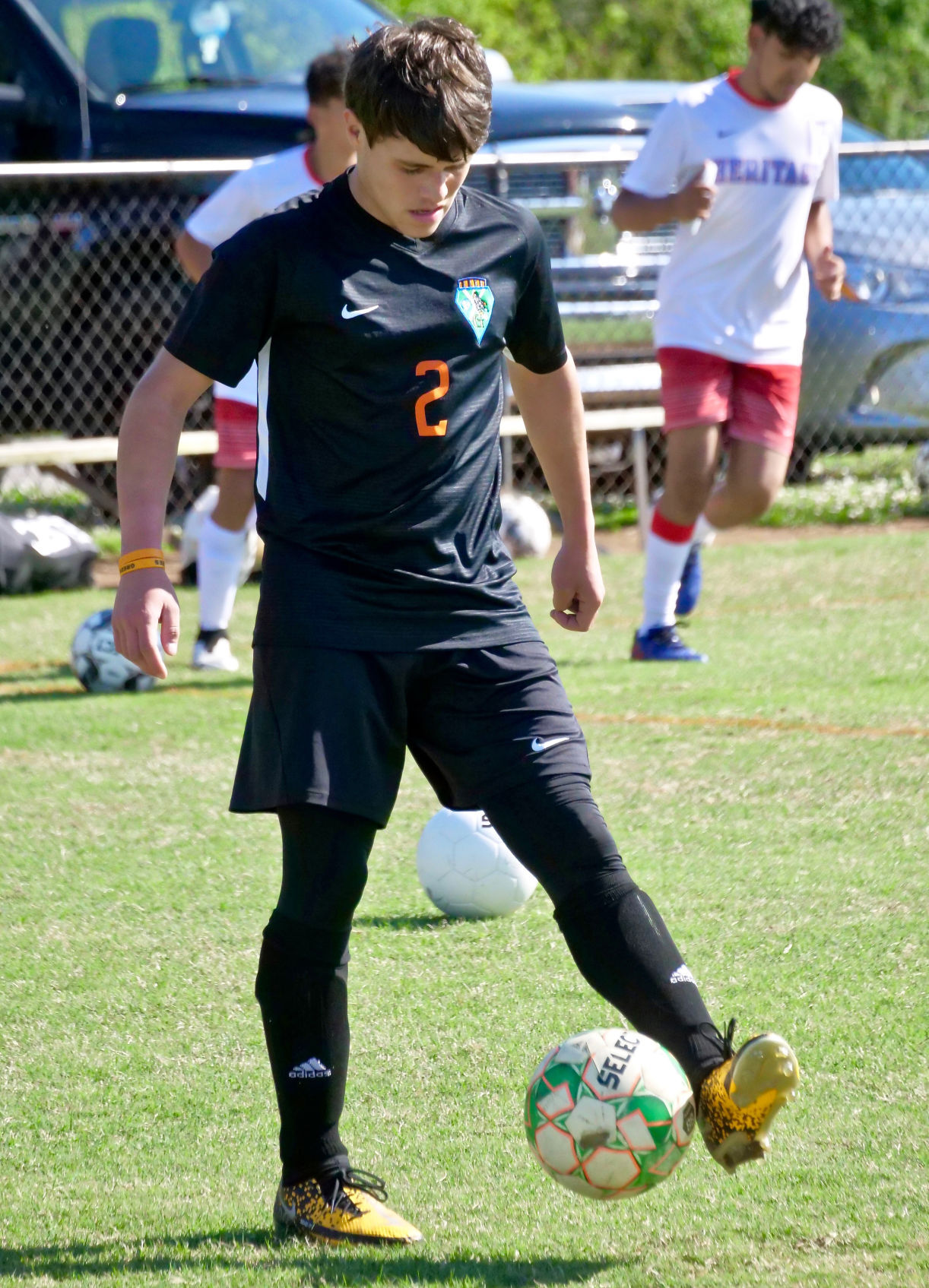 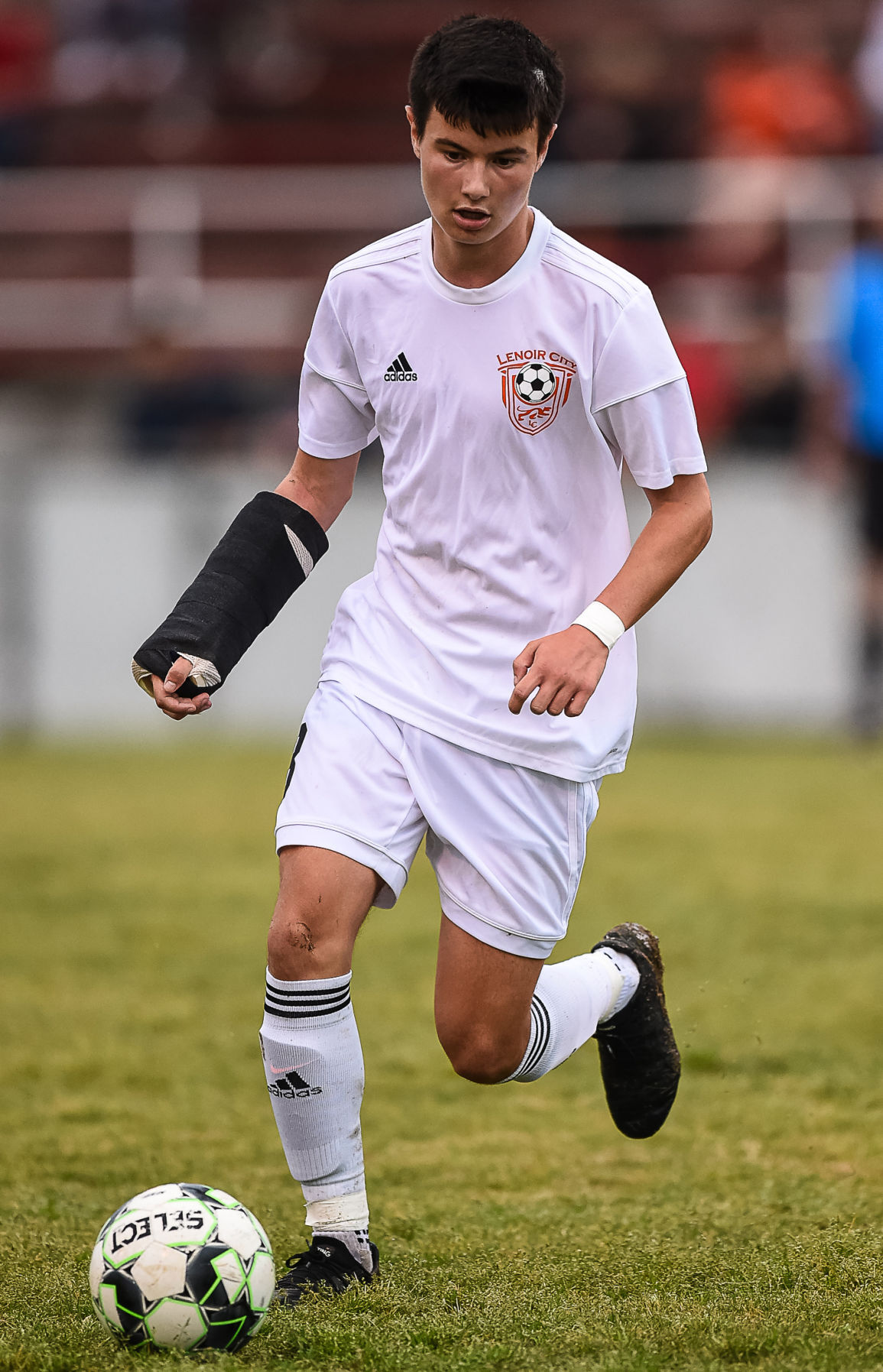 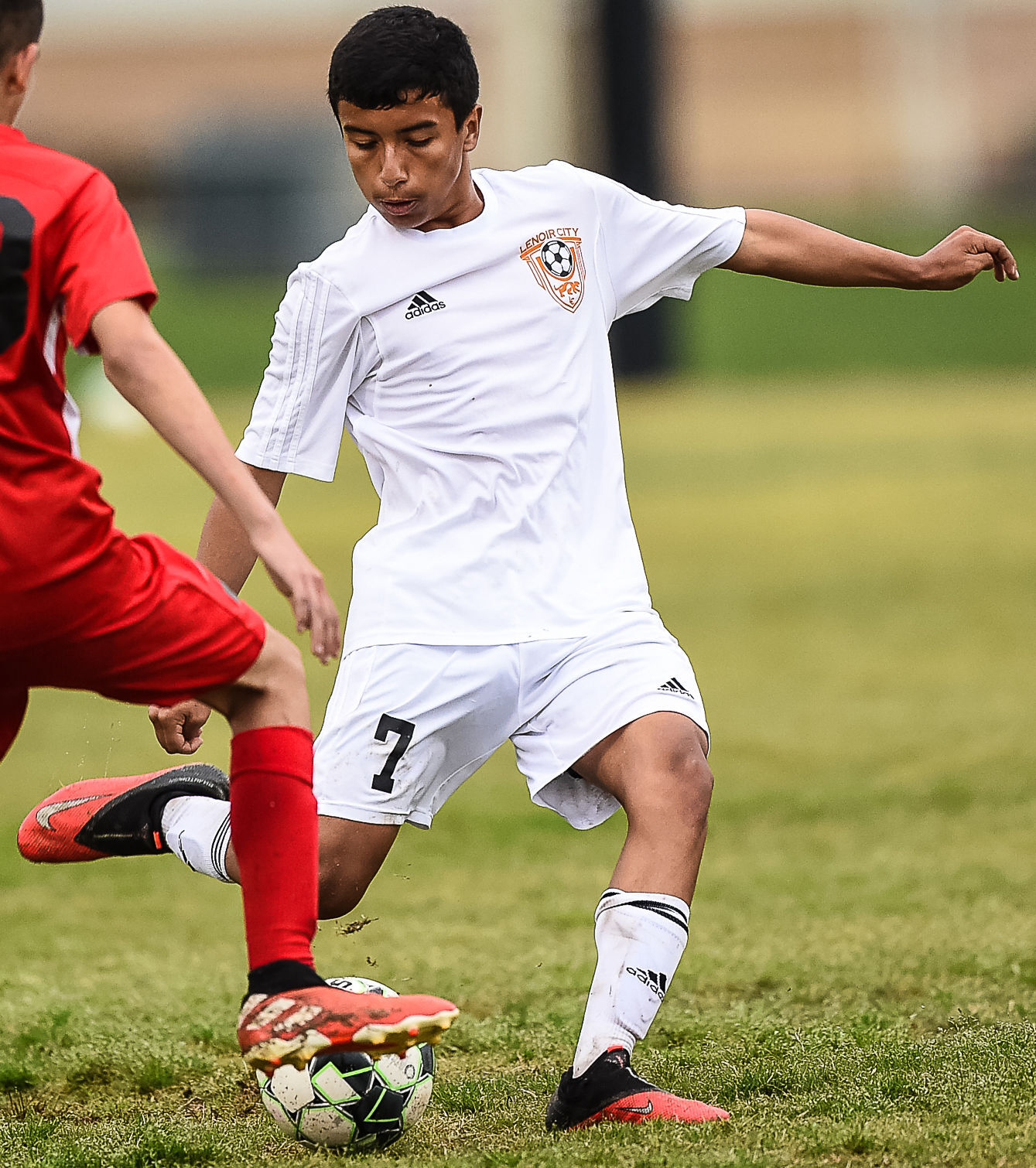 Loudon High School senior Cherinet Feezell was named the District 5-2A Most Valuable Player after totaling 24 goals and four assists. Feezell is also the 2021 All-County Player of the Year.

Greenback School junior Noah Pifer passes the ball in warmups prior to a match against Heritage High School.

The 2021 All-County Boys Soccer Team is chosen through a combination of statistics, personal observation and coaching suggestions. Final decisions are made by News-Herald sports writer Nick Davis. He can be contacted at 865-635-0841 or nick.davis@news-herald.net.

Arguably no player in Loudon County benefitted their team this year more than Loudon High School senior Cherinet Feezell. The athletic, quick-footed senior had a breakout season en route to being named the Redskins’ Offensive Player of the Year.

Feezell netted 24 total goals this season and chipped in four assists to help guide Loudon to a third consecutive District 5-2A championship and make a run to the Region 3-2A semifinals.

“Cheri is that player that every coach wants on the team,” Yoni Espinoza, LHS head soccer coach, said. “He is very dangerous with his speed and strength.”

Feezell split time between soccer and track during spring and advanced to the Tennessee Secondary School Athletic Association Spring Fling for track. Feezell was named the District 5-2A Most Valuable Player and is the 2021 All-County Player of the Year.

The Greenback School Cherokees received a much-needed boost prior to the spring when the talented brother duo of Paul and Noah Pifer transferred from Concord Christian School.

Paul made an immediate impact and elevated play for the rest of the team as the season progressed. He took on an important role by helping Greenback achieve the first 10-win season since becoming a program in 2018. He also guided the team to a first District 4-1A championship and Class 1A sectional appearance.

Paul led the Cherokees with 21 goals, seven game-winners and eclipsed an 82% shooting percentage. He was named to the All-District 4-1A and All-Region 2-1A first teams and was selected as the Region 2-1A Offensive Player of the Year.

After earning All-District 4-3A honors on the basketball court, Lenoir City High School senior Scory Correa followed with a similar season performance on the pitch for the Panthers.

Although he only totaled three goals this year, Correa was a dynamic athlete that possessed top-end quickness, awareness and leadership that helped Lenoir City obtain six wins, including a 6-1 victory over rival Loudon High School and a 5-0 win against Heritage High School in the District 4-3A quarterfinals.

Correa was also named to the All-District 4-3A first team.

Oscar Vega functioned from center back and center field depending on what the Redskins needed in each match, which led him to becoming an All-District 5-2A selection as a midfielder.

Vega may not have lit up the stat sheet after scoring just four goals and recording three assists, but head coach Yoni Espinoza credited him as a player that can “make a difference in any part of the field and is a very skilled player.”

David Ross was an All-District caliber player for Lenoir City on the hardwood, but he also proved one of the best on the soccer field.

He netted four goals in his senior campaign and served as a team captain. Ross played a key role in helping the Panthers get back on track after an 0-4 start.

Noah Pifer accompanied younger brother Paul as another important factor for the Greenback’s unprecedented season that ultimately led to the Cherokees falling one match short of the Class 1A state tournament.

Noah scored seven goals and had nine assists on 80% shooting. He netted a game-winning shot and was selected as a team captain in his first year at Greenback.

Noah was also named to the All-District 4-1A and All-Region 2-1A first teams.

Austin Hamilton was one of the first players to play on Greenback’s inaugural soccer team in 2018 and has quickly evolved into one of the best defenders in the region.

He totaled two goals and one assist on 66.7% shooting, but he primarily starred on defense for the Cherokees this season en route to being named the District 4-1A Defensive Player of the Year. Hamilton was also named to the All-District 4-1A and All-Region 2-1A first teams.

Slaton was not a primary offensive threat but a stout defender and key in helping set up the offense. The senior captain earned the most playing time this season for the Panthers and helped guide Lenoir City to the District 4-3A semifinals.

Jovanny Espinoza often displayed a quiet demeanor, but the senior team captain let his play on the field do all the talking.

He was named the team’s Defensive Player of the Year and even recorded four non-keeper saves.

“He had a lot of responsibility in building up a very young team,” Yoni said. “Jovanny has that drive that’s hard to overcome, and he never shies down from any situation. He battled against the best and never backed down. He was a true leader for our defense.”

After joining the first Greenback boys soccer team in 2018 and barely knowing anything about the sport, River Steele eventually crafted his skill to the point of becoming an All-Region 2-1A selection as a senior.

Steele totaled four goals and two game-winners this season and was named to the All-District 4-1A first team.

Mark Anthony Astudillo was another member of the inaugural Greenback team three years ago and played an important role in helping build the program from a non-contender to a potential state tournament team.

Astudillo didn’t pose much of a threat on offense but starred as one of the Cherokees’ top two defenders. He led the team in minutes played, started in all 21 contests this season and was named to the All-Region 2-1A first team.

Braden Pickell missed a large portion of his junior season due to an arm injury sustained at the beginning of the season, but he returned late and finished the season on a high note.

Pickell managed to tie senior David Ross for the most goals with four in shortened playing time. Pickell is expected to be one of the top returners for Lenoir City next year.

The light-footed sophomore made an unexpected impact this season against some of the top competition in the state.

Sanchez earned MaxPreps Player of the Week honors and won the team’s Most Outstanding Player award. He is projected to make an even bigger impact in 2022 for the Panthers soccer team.