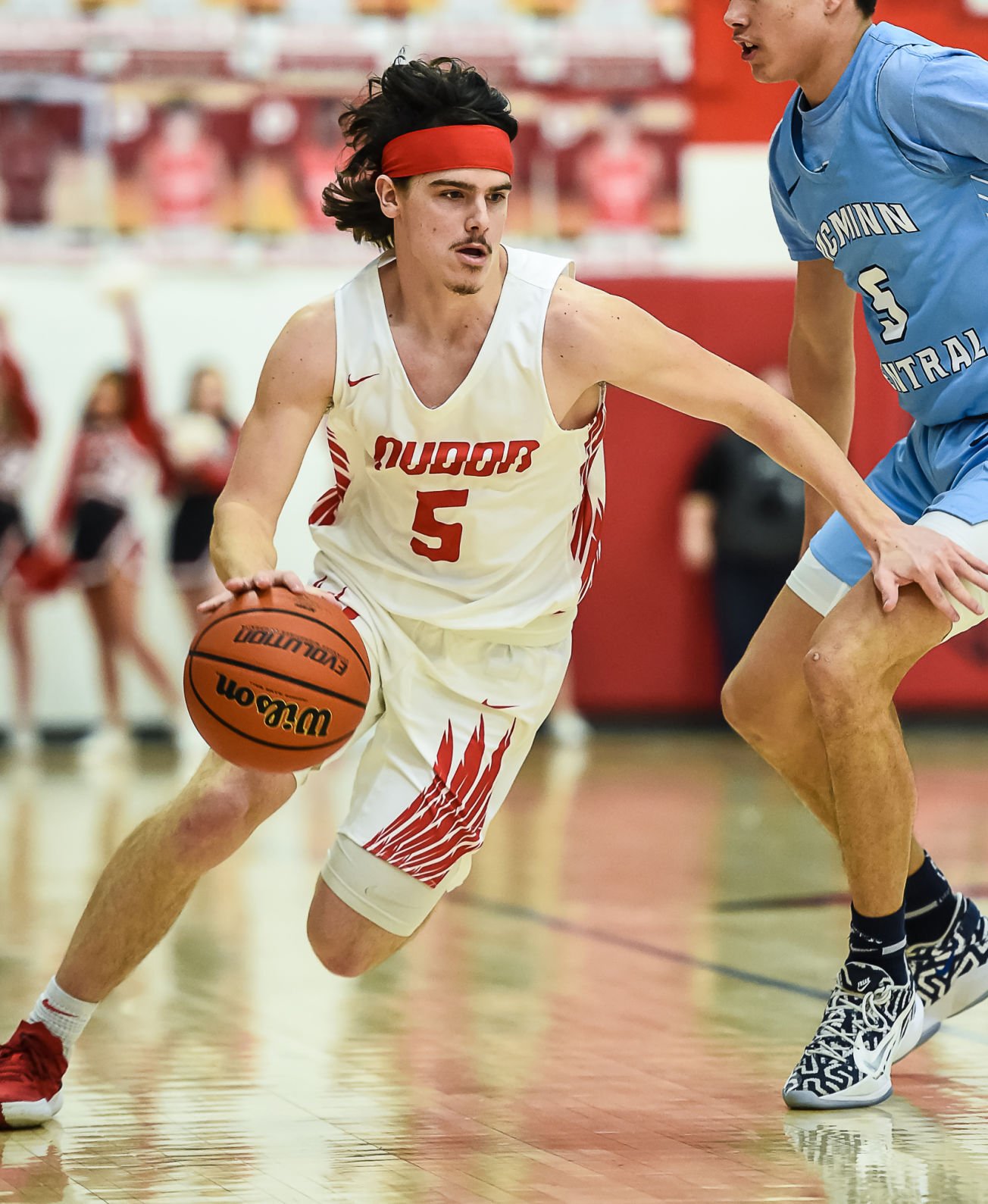 Loudon High School senior Donavon Blankenship drives down the court against McMinn Central High School. He was named to the All-District 5-2A regular season team and tournament Most Valuable Player, was selected to the All-Region 3-2A first team and is the 2021 All-County Player of the Year. 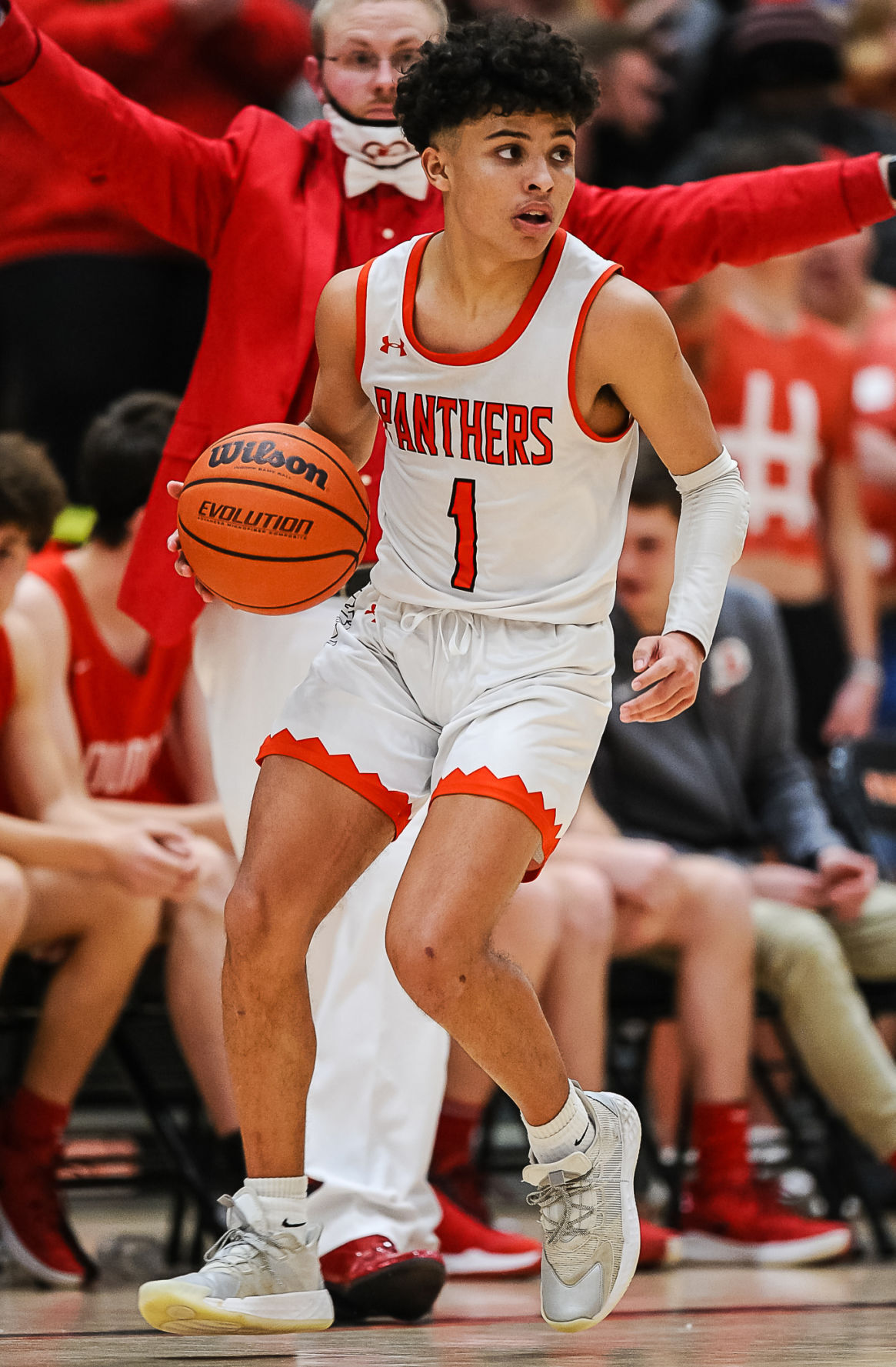 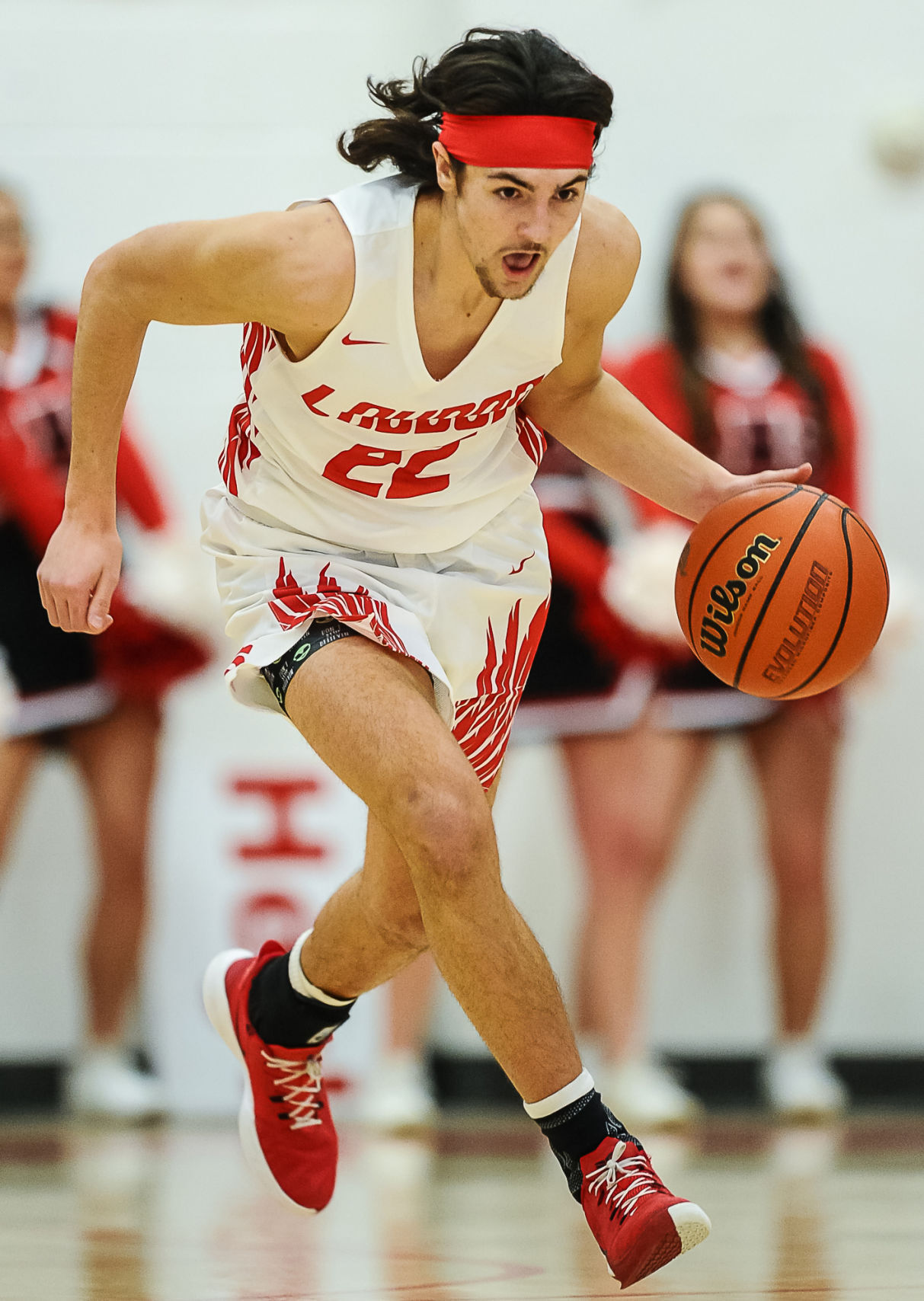 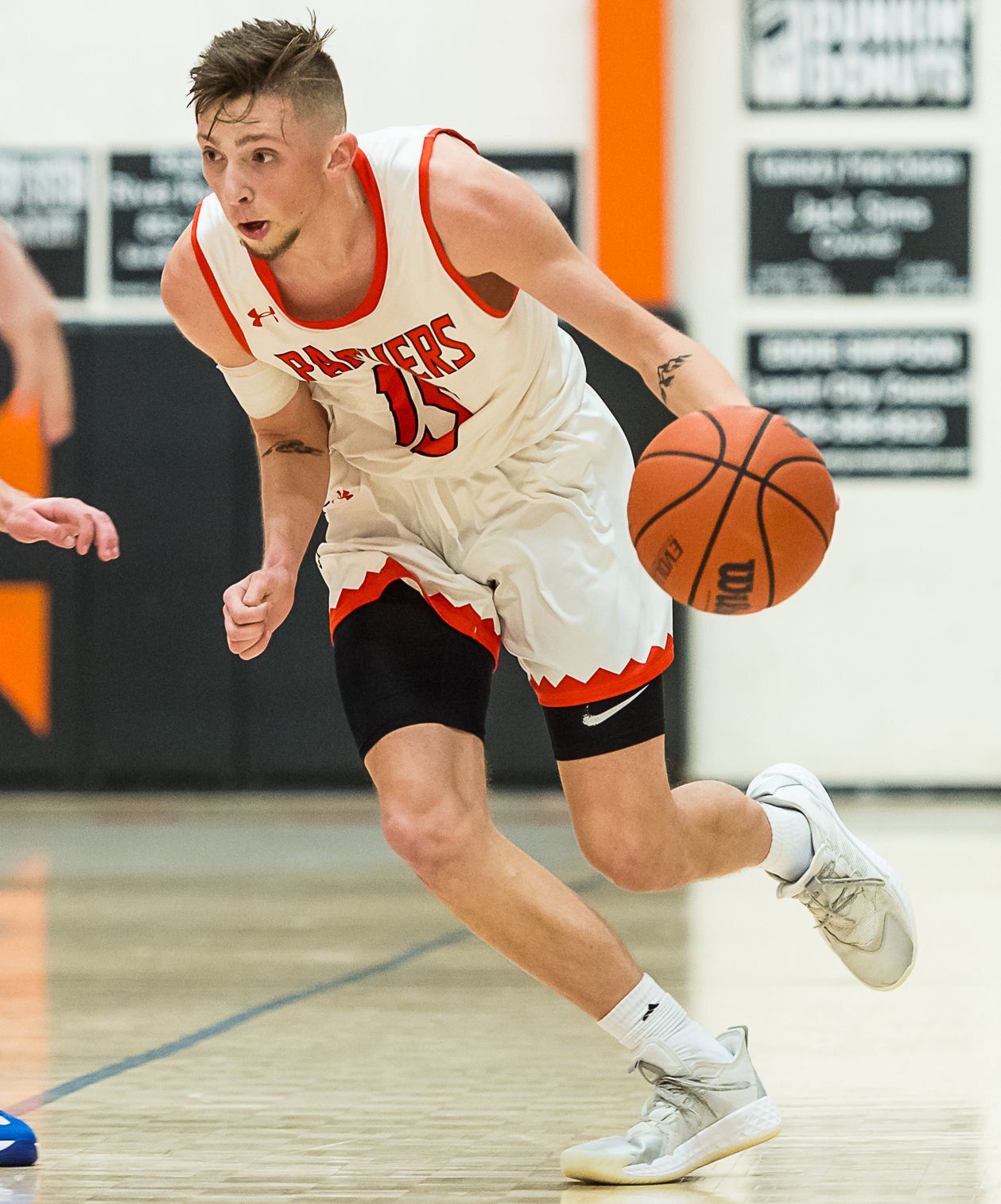 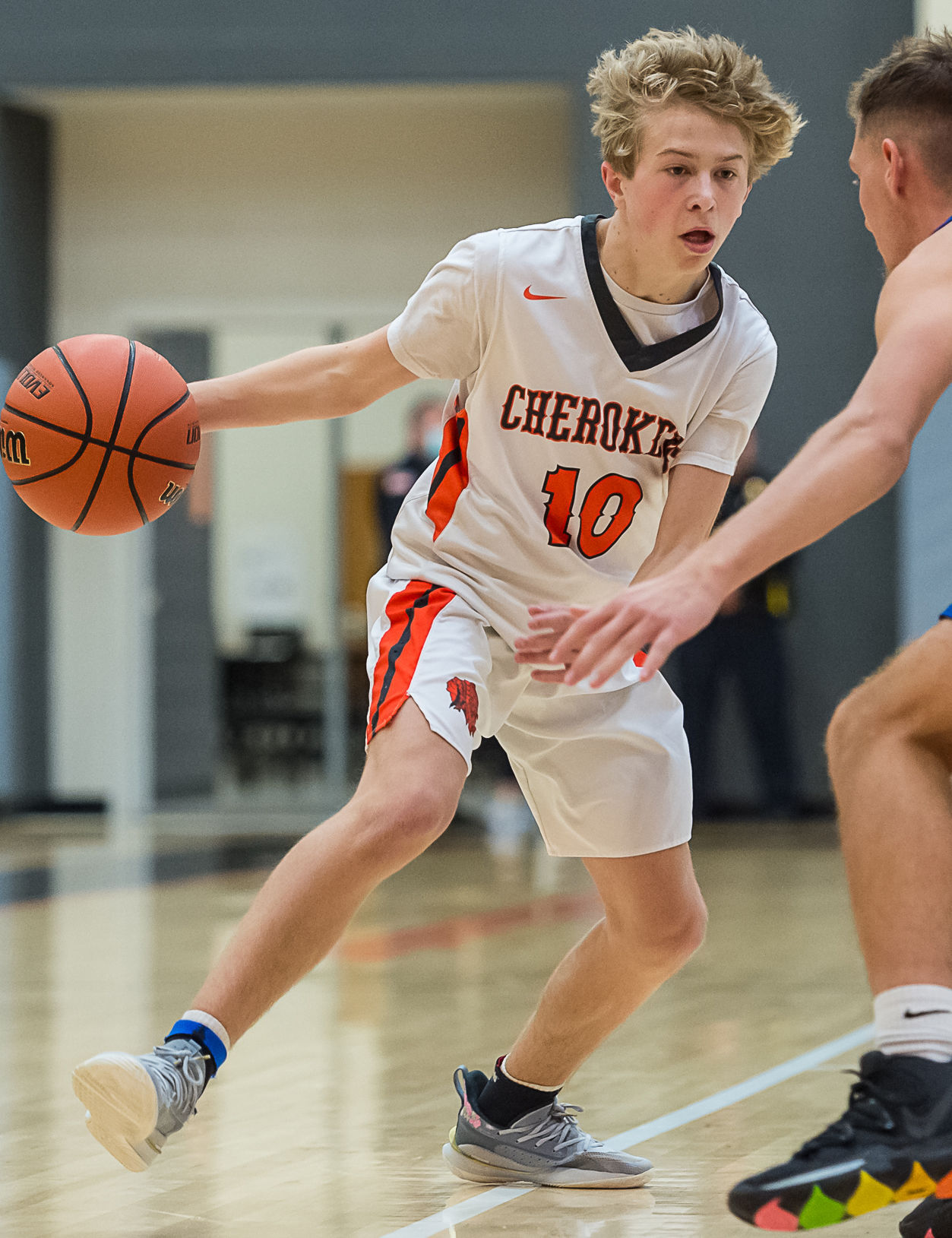 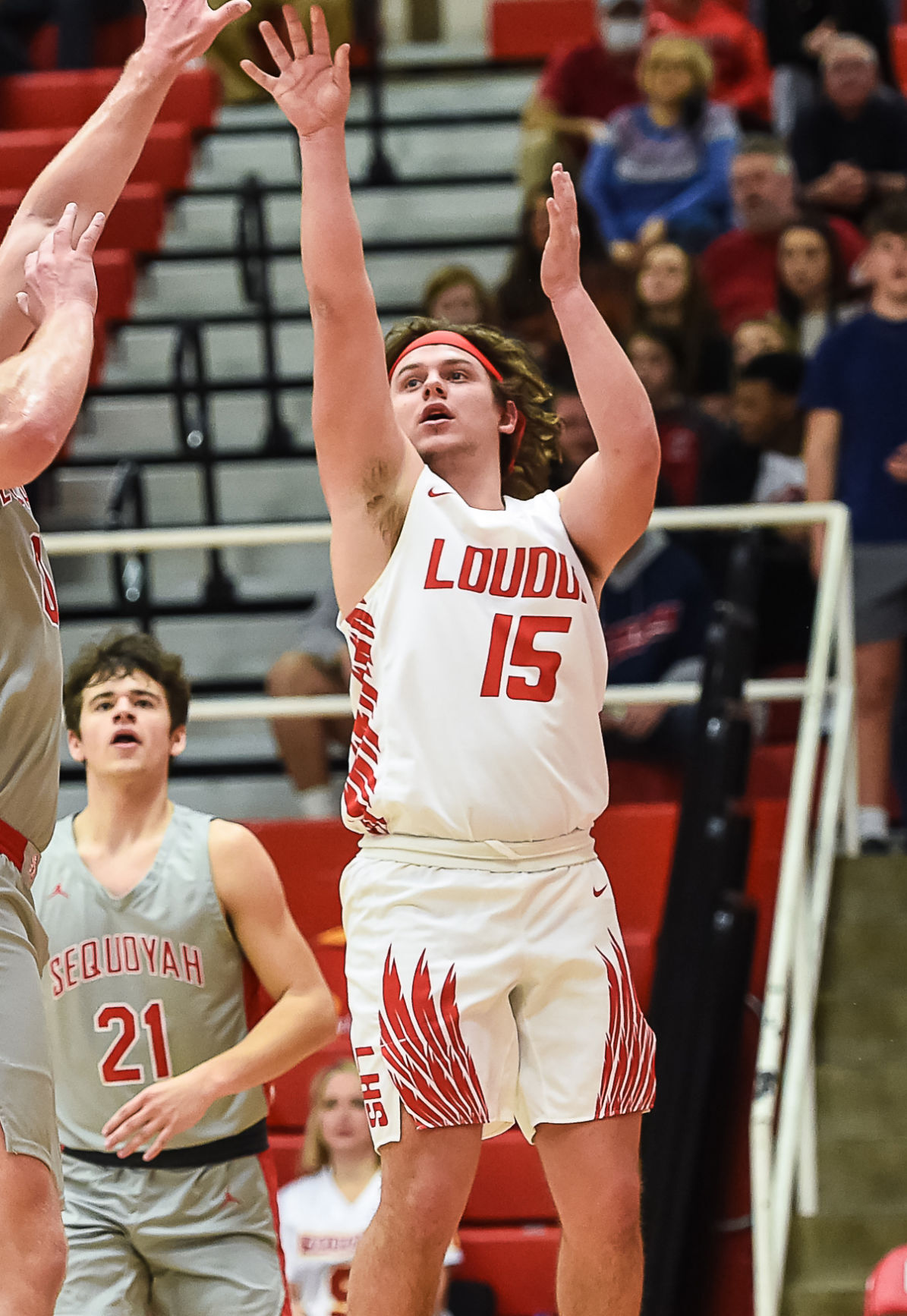 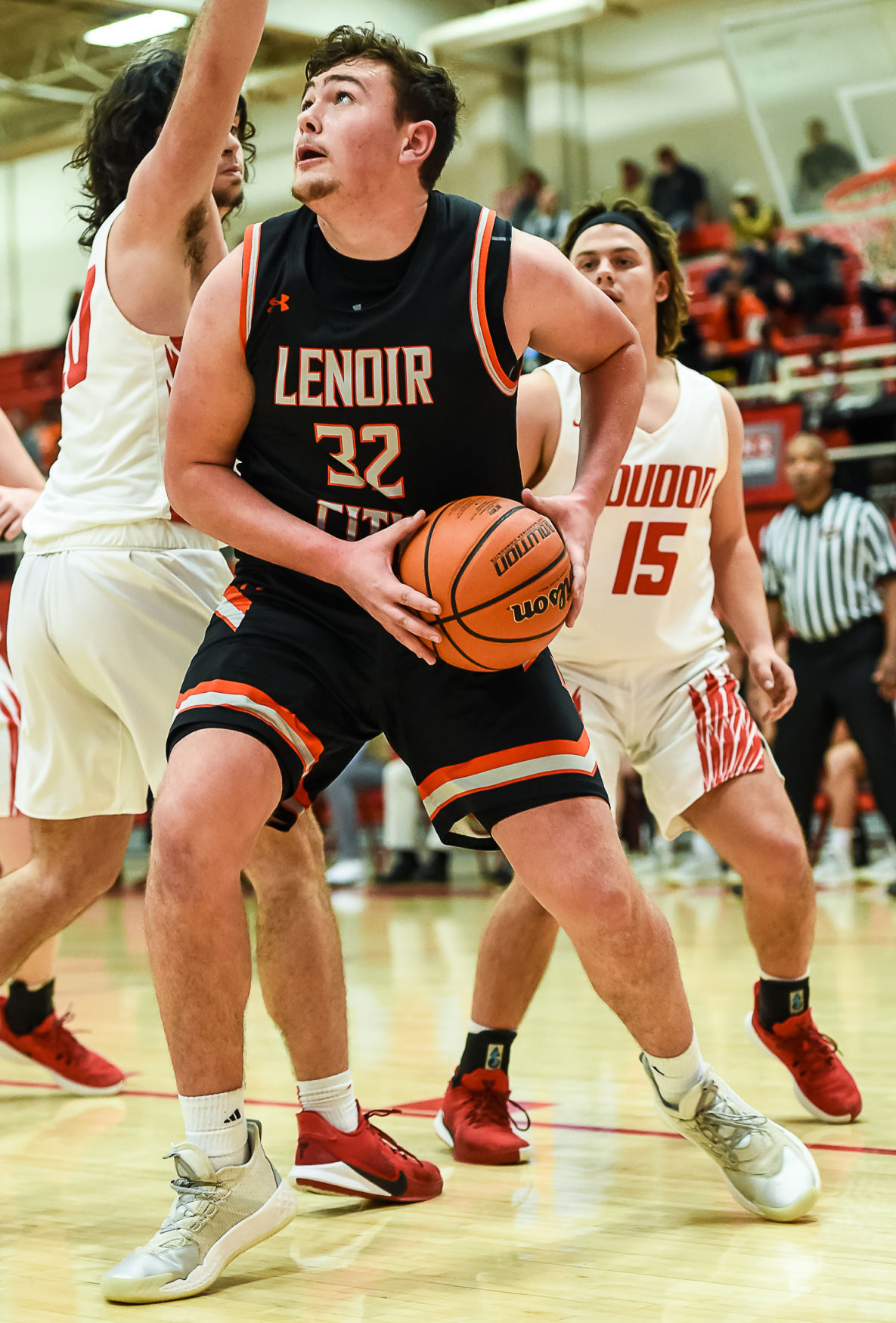 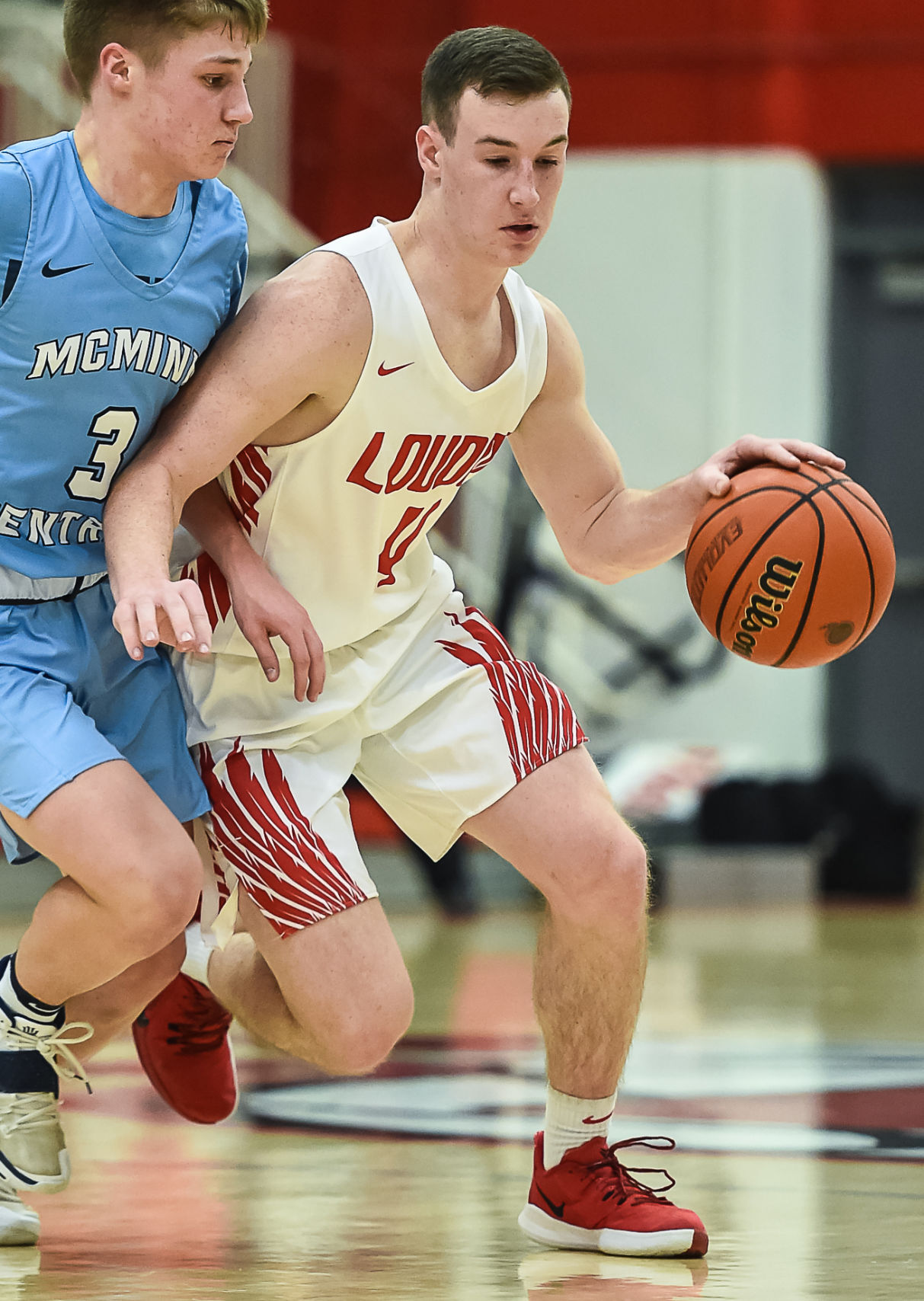 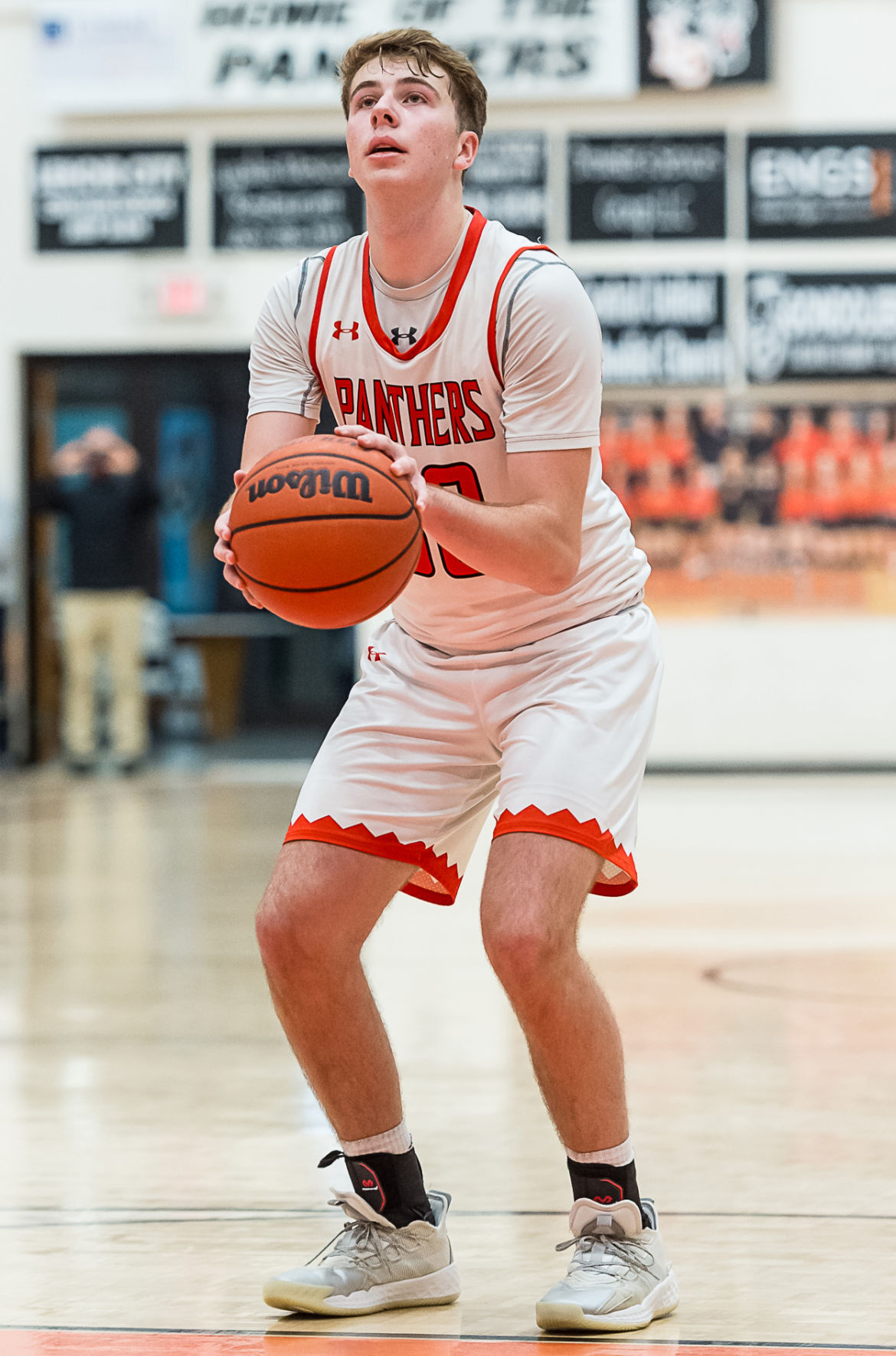 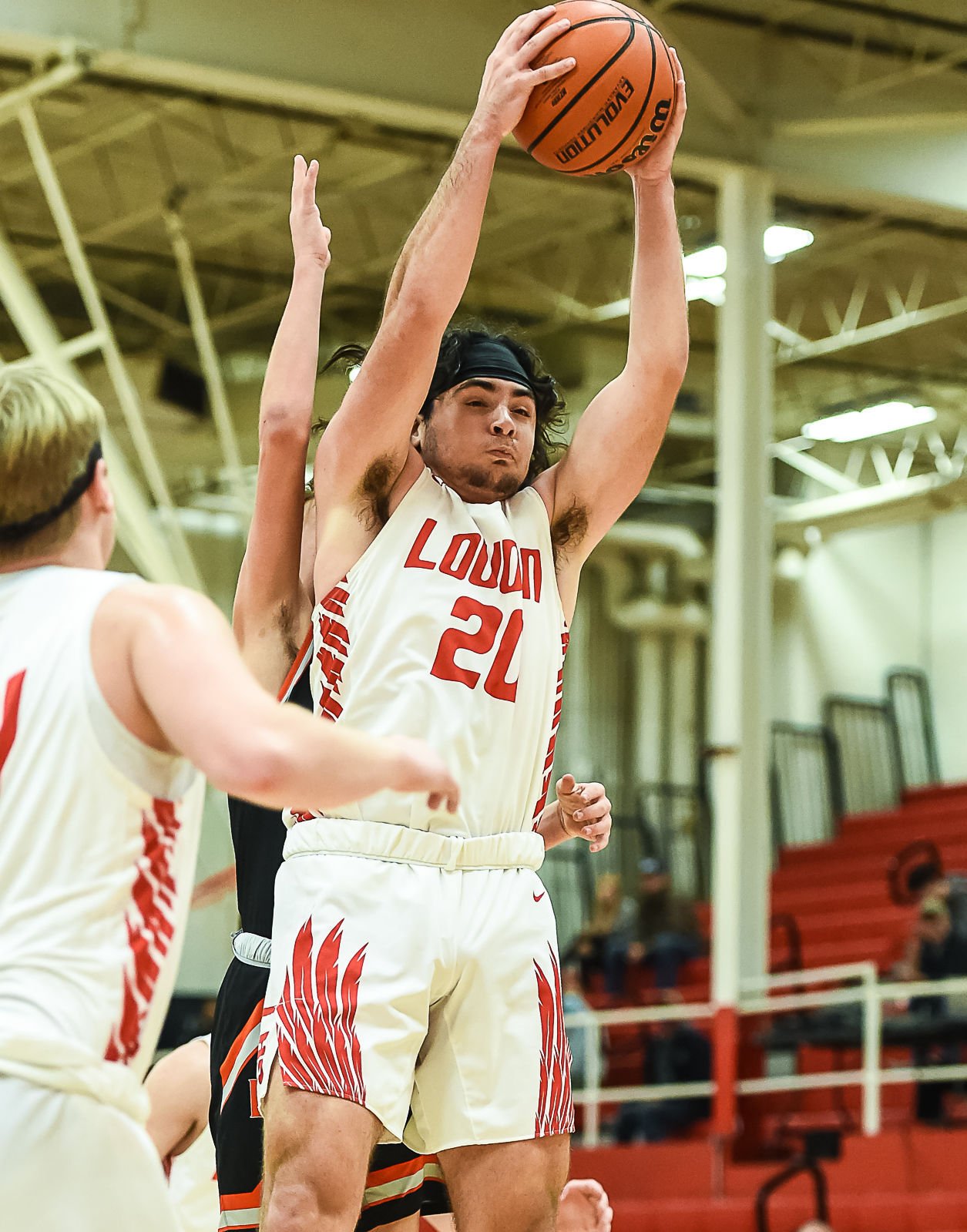 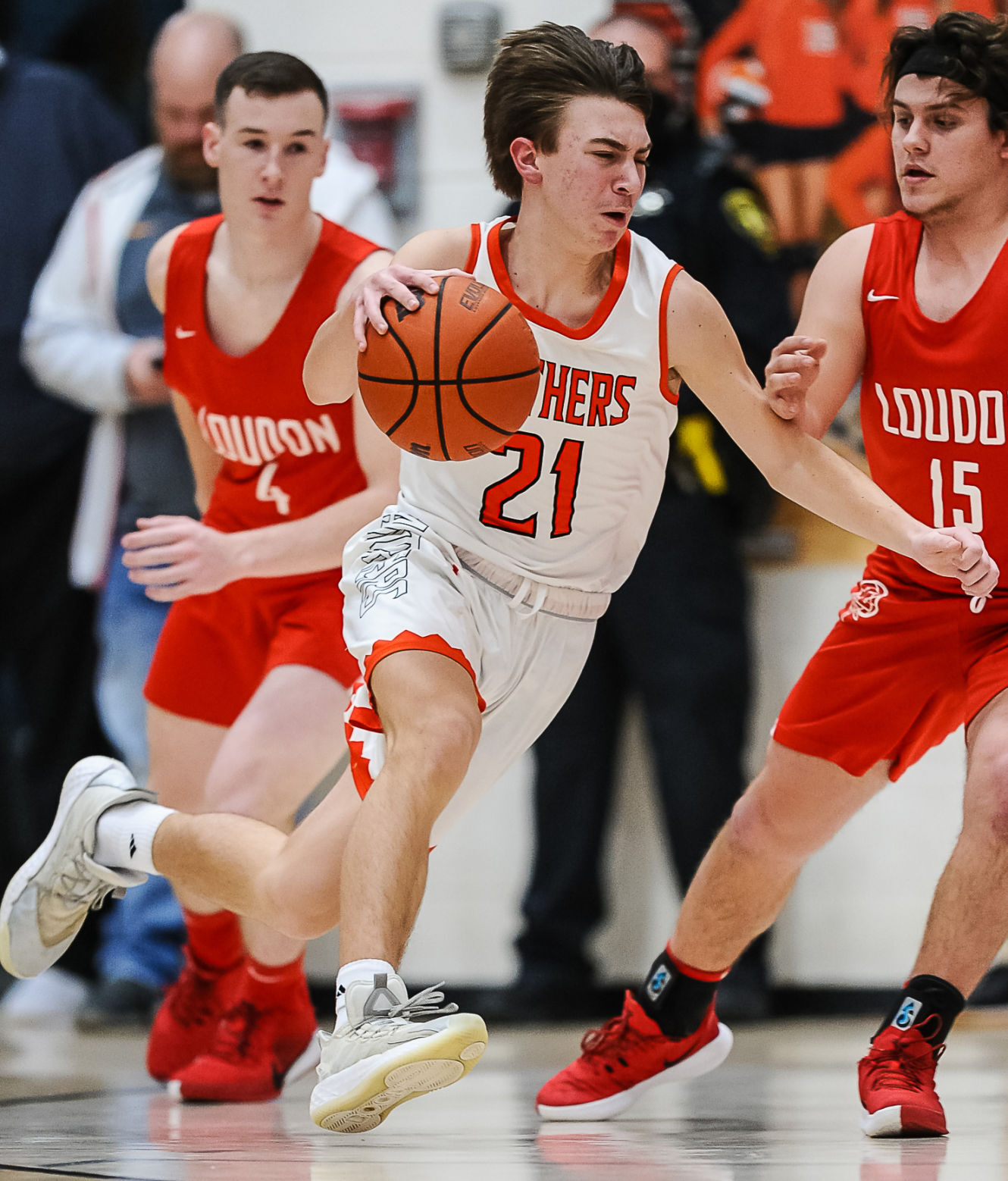 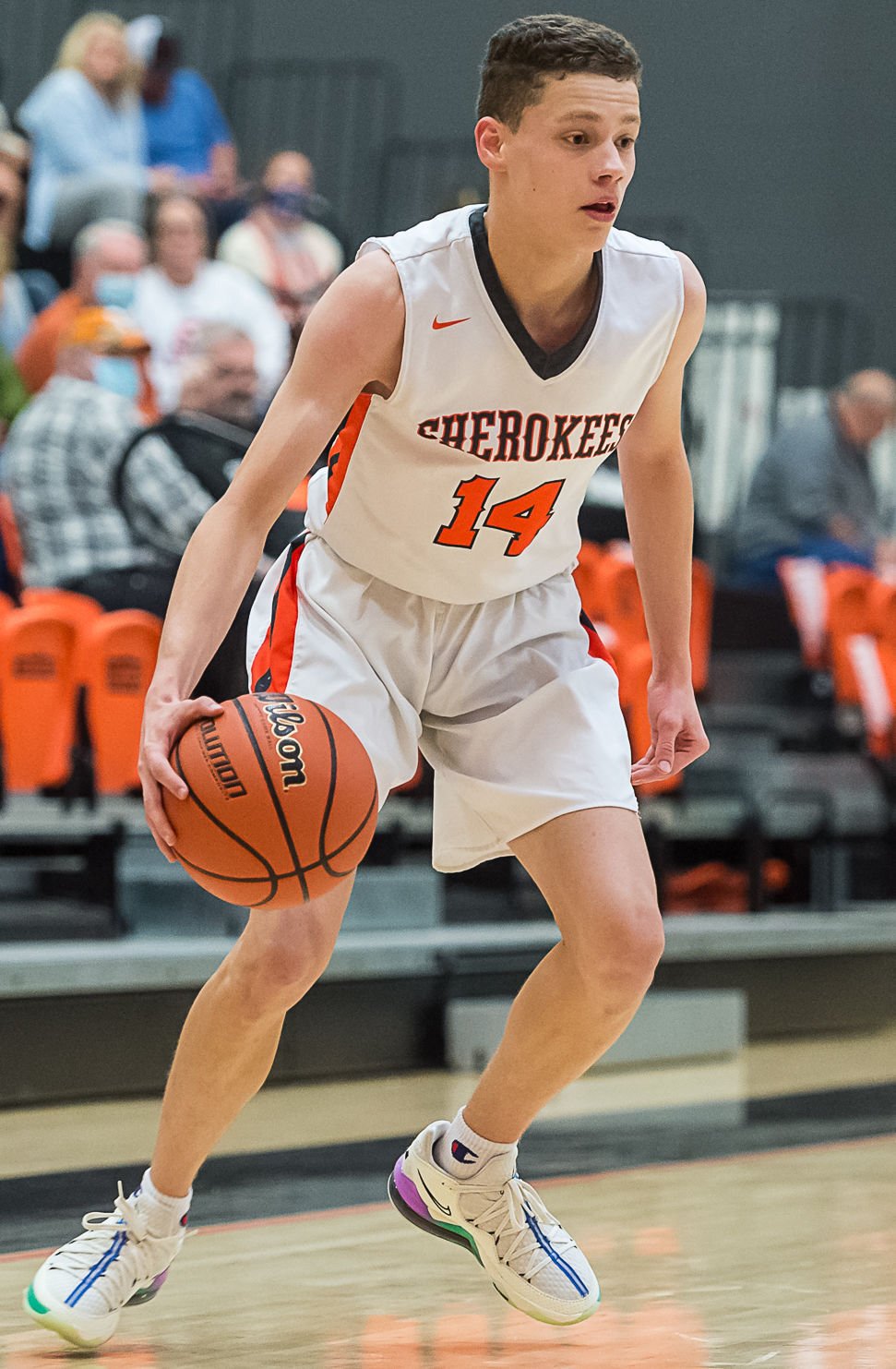 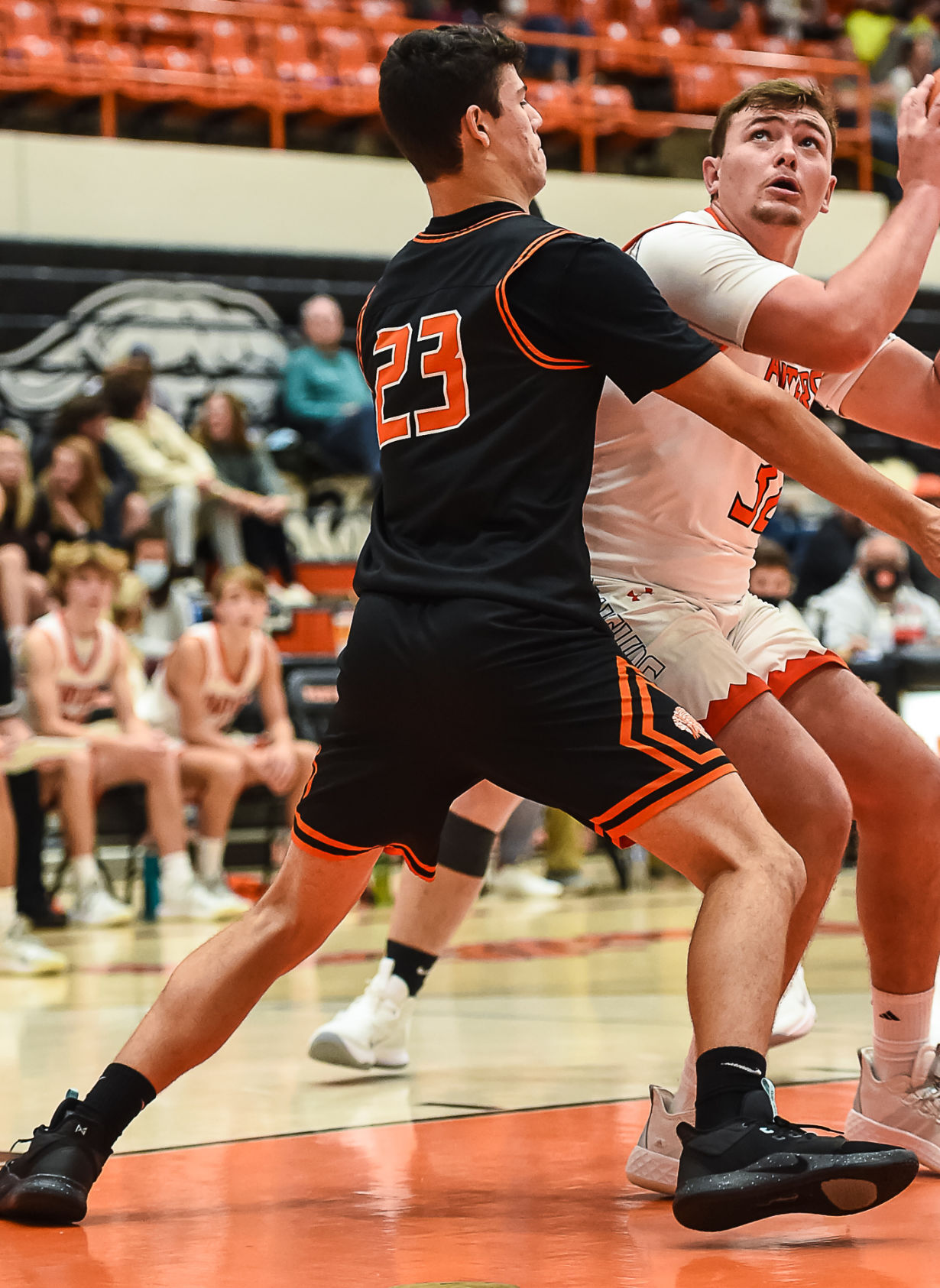 Loudon High School senior Donavon Blankenship drives down the court against McMinn Central High School. He was named to the All-District 5-2A regular season team and tournament Most Valuable Player, was selected to the All-Region 3-2A first team and is the 2021 All-County Player of the Year.

The 2021 All-County Boys Basketball Team is chosen through a combination of statistics, personal observation and coaching suggestions. Final decisions are made by News-Herald sportswriter Nick Davis. He can be contacted at 865-635-0841 or nick.davis@news-herald.net.

After an impressive junior campaign, Loudon High School point guard and 2020 All-County Player of the Year Donavon Blankenship returned for his senior year and again proved one of the best athletes in Region 3-2A and at the state level.

Blankenship led the Redskins on both sides of the ball and was an extremely effective playmaker after totaling 597 points and averaging 23 points per game, including a season-high 34-point performance Jan. 30 in the Redskins’ 57-43 win over rival Lenoir City High School. He also led the team with 205 rebounds, 56 steals and a 79% free throw percentage.

Blankenship was instrumental in helping Loudon win its first District 5-2A regular season and tournament championship since 2007 and was tabbed the district’s Most Valuable Player in both the regular season and postseason tournament. He was also named to the All-Region 3-2A first team and is a nominee for the Tennessee Sports Writers Association Class 2A All-State first team as a point guard.

Blankenship is the 2021 All-County Player of the Year.

The senior team captain averaged 12.7 points per game this season but also averaged an impressive 3.5 assists and four rebounds per game en route to being named to the All-District 4-3A first team.

Loudon High School’s Broady Harrison showed out all season as one of the best forwards in District 5-2A in his final season as a Redskin.

Although he suffered an ankle injury late in the regular season, Harrison managed to average 11 points per game for a season total of 278 points, including a season-high 25-point outing against Sequoyah High School. He finished second on the team with 141 rebounds and 36 steals but led the team with 40 deflections.

After starting three of the last four seasons for the Panthers, David Ross cemented himself as one of the best players in Loudon County due to his athleticism, pinpoint shooting and speed on the court.

Ross split time with senior Scory Correa and sophomore Kobe Franklin at point guard this season and still averaged 12.3 points per game. He was selected to the All-District 4-3A honorable mention team.

Greenback School’s Conner Morton may have lacked size and strength compared to most opponents, but his game made up for any disadvantages.

The Cherokees’ starting point guard led the team with an 11 points and four assists per game. He was named to both the All-District 2-1A regular season and tournament first teams.

Jackson Williams carved out a nice role for himself this season and played a key part in helping the Redskins sweep the field in the District 5-2A tournament and advance to the Region 3-2A semifinals for the first time since 2007.

Williams showed versatility by driving in the paint or knocking down three-pointers from the corner, which led him to score 219 season points for an average of eight points per game. He also recorded 57 rebounds, 27 steals and 32 assists.

Tucker Yancey excelled on the gridiron in the fall, but he was also an invaluable player on the court this season for LCHS first-year head coach Josh Brannon.

Yancey’s size and skills often posed a mismatch for opponents down low, which enabled him to lead the team in rebounds. He scored a season-high 17 points and recorded nine rebounds Feb. 16 in the Panthers’ 60-52 loss to Hardin Valley Academy in the District 4-3A tournament.

Yancey was named to the All-District 4-3A tournament team.

Keaton Harig has been a record-setting quarterback and field general for the Redskins’ football team the last three years, but he also commanded the court throughout the 2020-21 season under LHS head coach Josh Graves.

Harig started at the two spot but also split time with Donavon Blankenship at point guard to help distribute the ball and set up plays. He totaled 191 points, 57 rebounds and 34 steals, while leading the team in assists with 113.

Harig was named to the All-District 5-2A tournament team.

Parker Tramell easily showed himself as Lenoir City’s Most Improved Player this season by developing a shot and increasing his strength to compete with larger defenders in District 4-3A play.

Tramell teamed up alongside Tucker Yancey in the post and averaged 6.9 points and five rebounds per game. Brannon projects Tramell to evolve into a an All-District 4-3A player by the end of next season.

Haden Houser played a pivotal role this season down low for the Redskins with his physicality and perimeter shooting.

Houser totaled 178 points, including a 17-point season high performance in a win over Meigs County High School. He finished fourth on the team with 102 rebounds and 17 deflections, and he was fifth overall with 15 steals and 16 assists.

Kobe Franklin stepped into a starting role for the Panthers this season and shined as one of the top sophomores in District 4-3A.

The talented shooting guard averaged 6.9 points and four rebounds per game. Additionally, he averaged 13 points per game against county opponents Greenback and Lenoir City and is expected to play a much larger role next season.

Harwell possessed smooth shooting mechanics and a quick first step, which allowed him to average 6.5 points per game this season. Belcher predicts Harwell will play more of factor next season for the Cherokees.

Cameron Moffett often towered over opponents and displayed versatility as an athletic big man with speed.

The former tight end transitioned quickly to the basketball court this season and contributed with an average of five rebounds and six points per game.