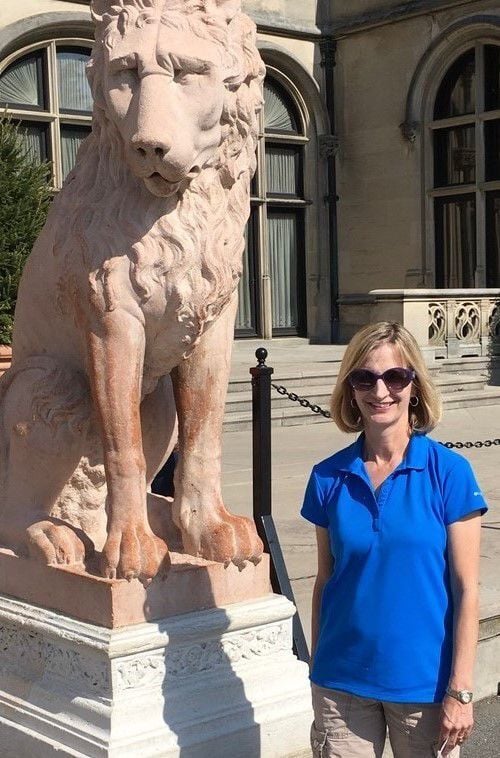 Rebecca Kester stands with a lion statue at the Biltmore Estate. 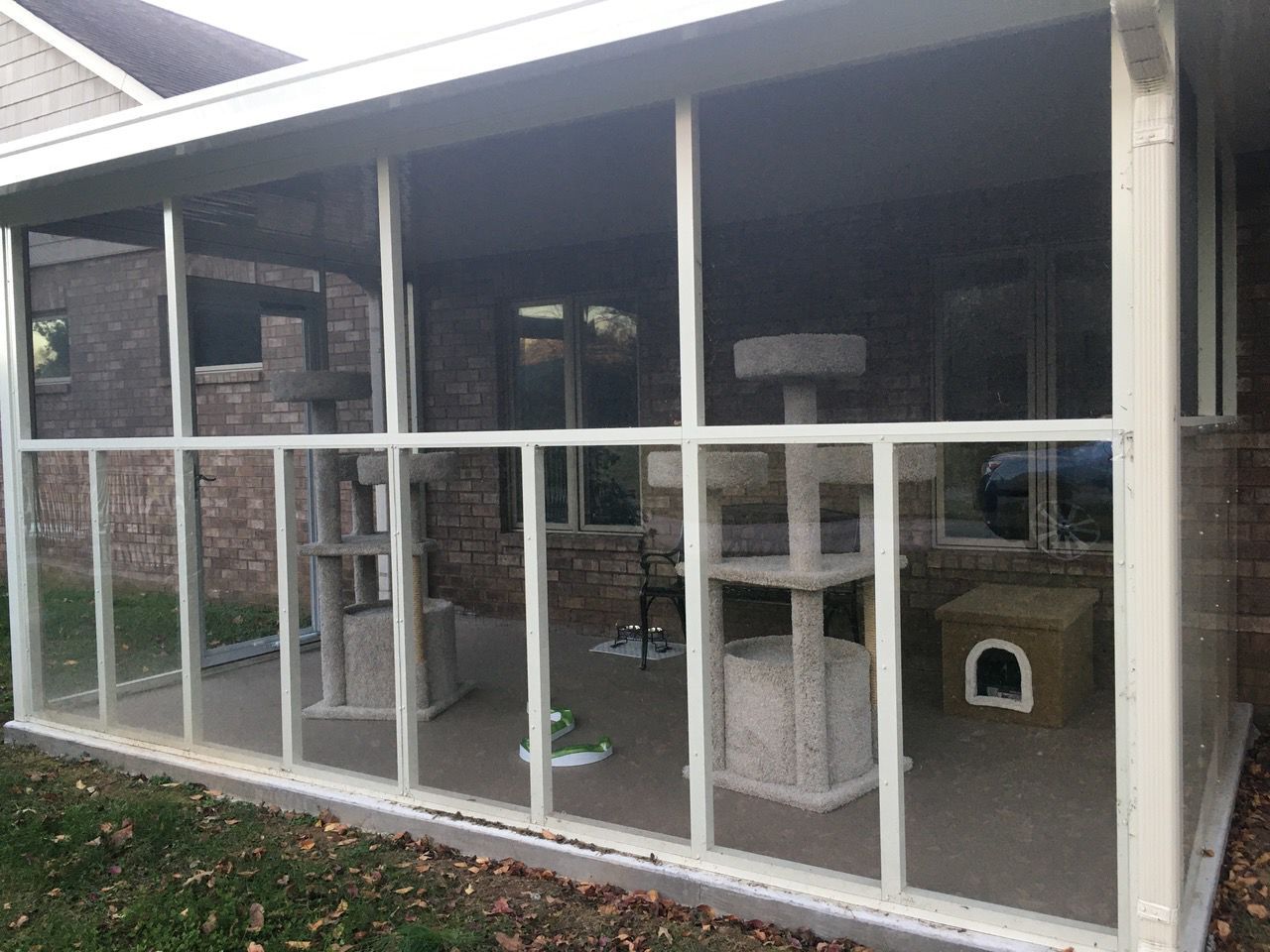 Loudon County Animal Shelter's cattery outdoor area is screened in and filled with toys and posts for cats to hang out. 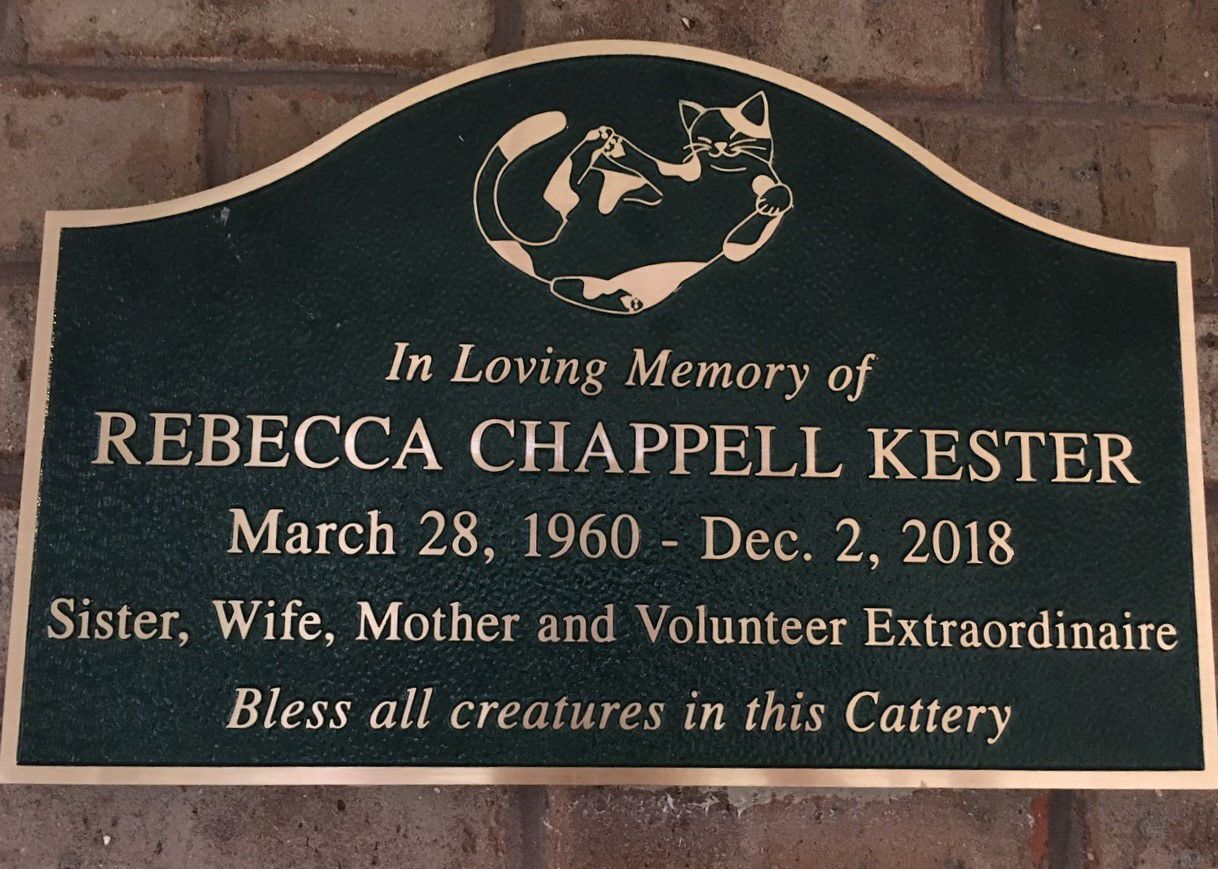 A plaque hangs on the wall in the outdoor area of the Loudon County Animal Shelter cattery to remind visitors of Rebecca Kester.

Rebecca Kester stands with a lion statue at the Biltmore Estate.

Loudon County Animal Shelter's cattery outdoor area is screened in and filled with toys and posts for cats to hang out.

A plaque hangs on the wall in the outdoor area of the Loudon County Animal Shelter cattery to remind visitors of Rebecca Kester.

Mark Kester, Tellico Village resident, made the approximately $5,000 addition possible in memory of his wife, Rebecca Kester, who died in 2018.

The Kesters moved to Tellico Village in 2014 and Rebecca immediately started looking for ways to volunteer with animals as she did in New Jersey. Right away, she began volunteering with the shelter and PetSmart in Turkey Creek.

“PetSmart is very generous and works with the Loudon County Animal Shelter and keeps the adoptable cats in their retail location in Knoxville,” Kester said. “My wife would volunteer and go clean the litter boxes, and that was sort of her vicarious way of getting more cats. She has two here, and we’d have more if she didn’t have that outlet. It really saved our marriage, I guess, at the end of the day. She always loved cats.

“Her mother used to raise purebred Persian cats and would always have six or seven cats roaming around the house and all that,” he added. “This was Becky’s way of almost having six or seven cats but only actually having two cats.”

Kester described Rebecca as selfless and wanted to honor her memory in the most fitting way possible, which led to the newly installed cattery. Kester believes Rebecca would have enjoyed the cattery.

The indoor and outdoor space at the shelter gives adoptable cats more room to let their personalities shine.

April Kyle, LCAS rescue and events coordinator, said the cattery is a way to help Rebecca’s “mission live on to help many more cats to come.”

Some cats are left at the shelter longer than others. The aim of the cattery is to keep cats from being cooped up in small cages, Kyle said.

“Some of our cats, whenever they’re brought in and they’re looking for new homes, some of them are adopted very quickly, sometimes even the very same day,” Kyle said. “Some of our other cats will be here for a little bit longer and sometimes even months. Living for months inside of a cage can certainly deteriorate their personality and emotional and physical well-being. The cattery allows them to be cage less where they’re in an indoor room area, and then they have access to be able to go outside, to a really nice, protected, screened in area. It just really helps them to feel happier, and the happier the cat, the more likely they are to be adopted. It’s really going to help out a lot of cats to be happy.”

Kyle was excited when she learned the shelter’s dreams of having a cattery could be reality.

“We were very sad and upset with Becky’s passing,” she added. “When Mark said that they wanted to help and contribute something in her memory, it just seemed very fitting.”