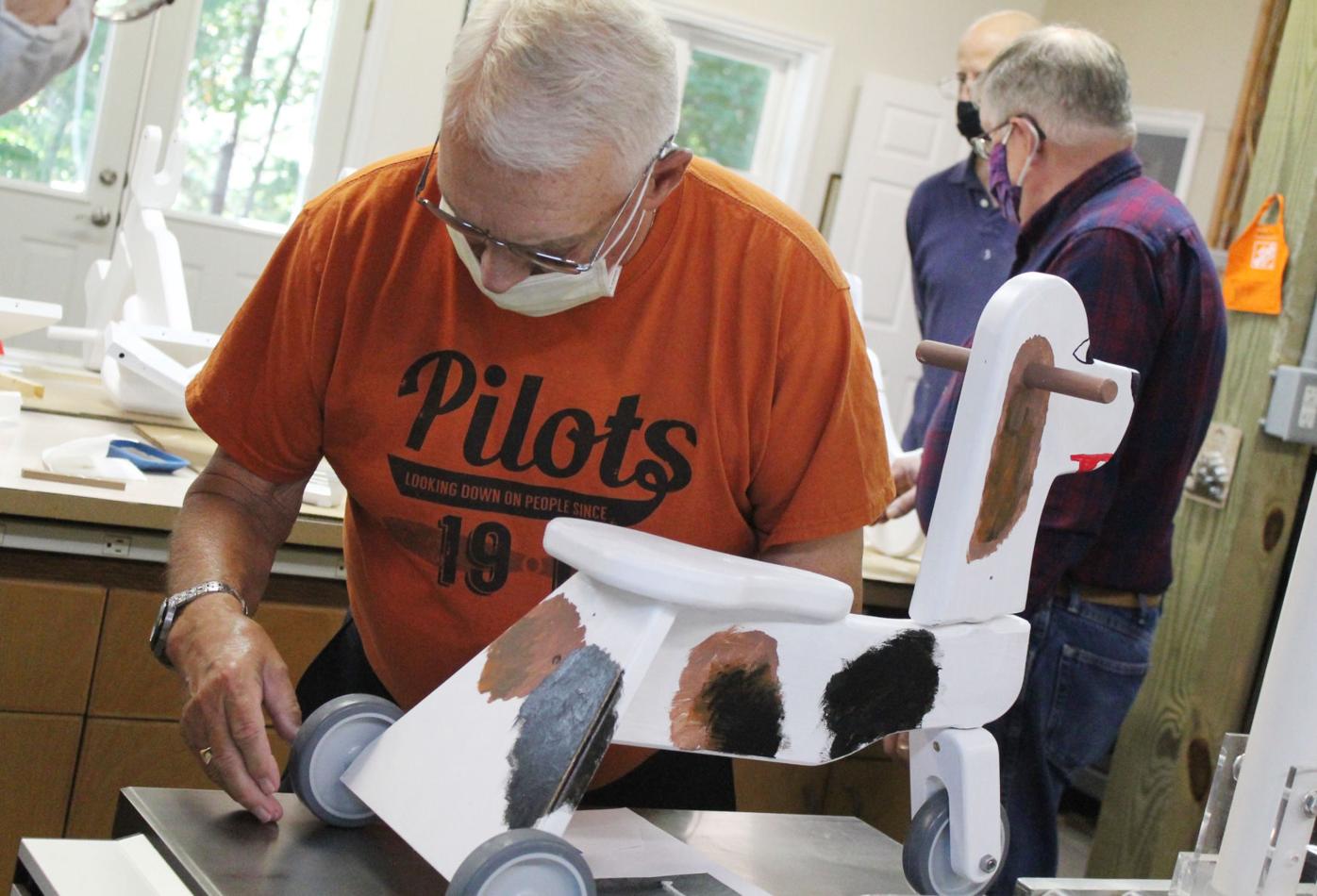 Tellico Village Woodworkers Club member Darryl Downing checks to make sure one of the toys is fine. 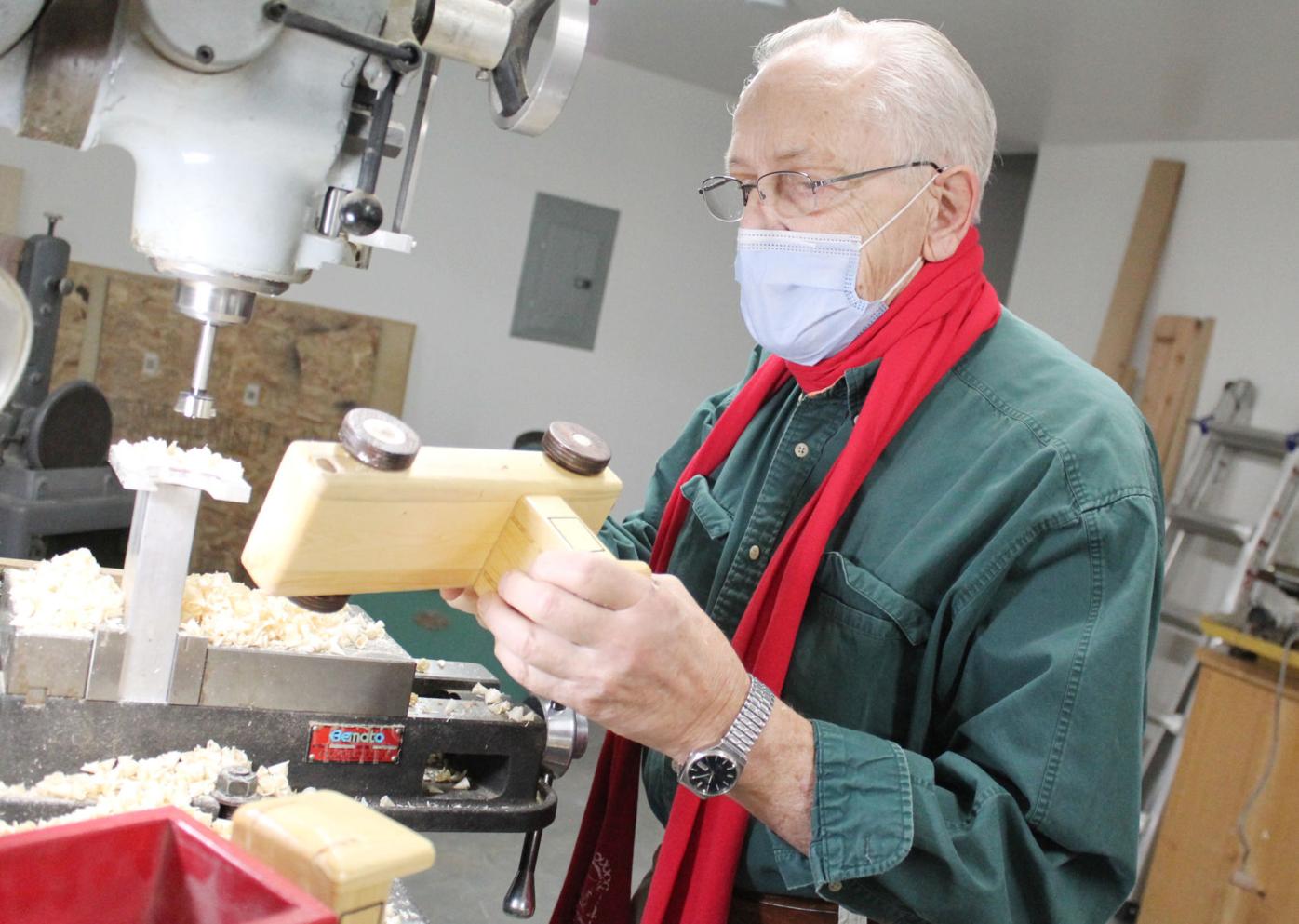 Tellico Village Woodworkers Club member Darryl Downing checks to make sure one of the toys is fine.

For decades the local Toys for Tots program has offered Christmas joy to children.

Family applications were made available to pick up at Loudon County Sheriff’s Office the week after Labor Day and will go through 4 p.m. Oct. 21 before submissions are halted to allow for sponsors to purchase gifts, Debbie Hines, LCSO executive secretary and local Toys for Tots coordinator, said. This year’s turnout has seen about 25 families turn in their application, but Hines anticipates that number will increase toward the final few days. Of the roughly 25 families, only one is new to the program. Last year’s effort helped about 200 families.

This year won’t include a day devoted to gift pickup because the program doesn’t have a warehouse storage location. Instead, families will be asked to visit LCSO. Pickup last year was conducted through the old Loudon High School building, but that location is no longer available for use.

“We’re going to use the training room,” Hines said. “The guys will do shift change in the squad room for December. If one business has a name and one business has a name, we’ll wait until both of the names are in for the family, we’ll wait until the whole family’s here as far as the gifts, and then we’ll just kind of look and make sure they look even. But what else are we going to do?”

Shoppers are also needed this year, as some have backed out or changed how they will help for varying reasons.

“We’ve lost two churches, one bank and one of the plants out in Oak Ridge,” Hines said. “The plant is just going to do donations, so I’ve submitted for that, but that means that we’re going to have to shop. The churches I assume it’s just because they’re not meeting. The bank I can’t get a hold of.”

The suggested donation for each child is two gifts or totaling at least $100. Supply batteries if the toy requires it.

Hines asks for no bicycle this year due to spacing.

“They get a name and a list of wishes and they do their shopping, and they bring it back to me, and we don’t want them wrapped or anything,” Hines said.

For more information on purchasing gifts, call Hines at 865-986-4823 or email dhines@lcsotn.org. Hines said she will need toys back by the week after Thanksgiving.

“As we gather with our family and friends during this busy holiday season and realize how blessed we are, please also realize that you have also blessed a child’s life in Loudon County,” Hines said in a release.

Tellico Village Woodworkers Club in early September started its involvement in the program with about 50 volunteers, but planning started shortly after the group held its annual toy presentation at the Community Church at Tellico Village.

For the group’s 24th year involved, workers have had to keep in mind COVID-19 safety measures while crafting toys.

“We were committed all the way through this,” Steve Bolton, club Toys for Tots co-chairman, said. “We’ve just been dealing with the curveballs and sliders as they come to us.”

Club members are encouraged to work in smaller groups this year, he said.

“There’s usually a lot of groups that are formed and they build toys as a group,” Bolton said. “One of the effects that we’ve seen is a number of guys have decided this year to work solo or smaller ones — one- or two-man teams. Some of the other things that we have had to do to adapt to this is gather or kind of remotely discuss what we’re building and then, ‘OK, you build this portion. You build that portion. I build that portion,’ and then we come together and do a little assembly, sanding and finishing. More of a project management kind of style than we’ve had to employ in the past, which is some ways — a lot of the guys like the camaraderie that they get and obviously we have varying levels of abilities here. Some of these guys just do absolute phenomenal work and intricate boxes and inlays and things like that. There’s always the opportunity then for a more novice woodworker to gain some perspective and certainly some ability.”

Unlike years past, the Woodworkers will not collect new, unused toys and cash donations at certain drop off locations. Bolton asks for donors or groups of donors to contact Hines to “adopt a child” or to send a cash or check donation. Gifts can be dropped off at LCSO or the Woodworkers will coordinate collection and group drop off.

“It’s strictly because of COVID and I guess the concern with that,” Bolton said. “Last year’s event, the event that we typically hold on Dec. 3 where the sheriff comes in for our presentation, the Community Church room, their big hall, the stage was filled with toys. It was very impressive to see that many toys, not only what the Woodworkers built but also what the community had donated. Plus there was donations of upwards of $1,600 in cash donations. Not a small chunk of change for that program.”