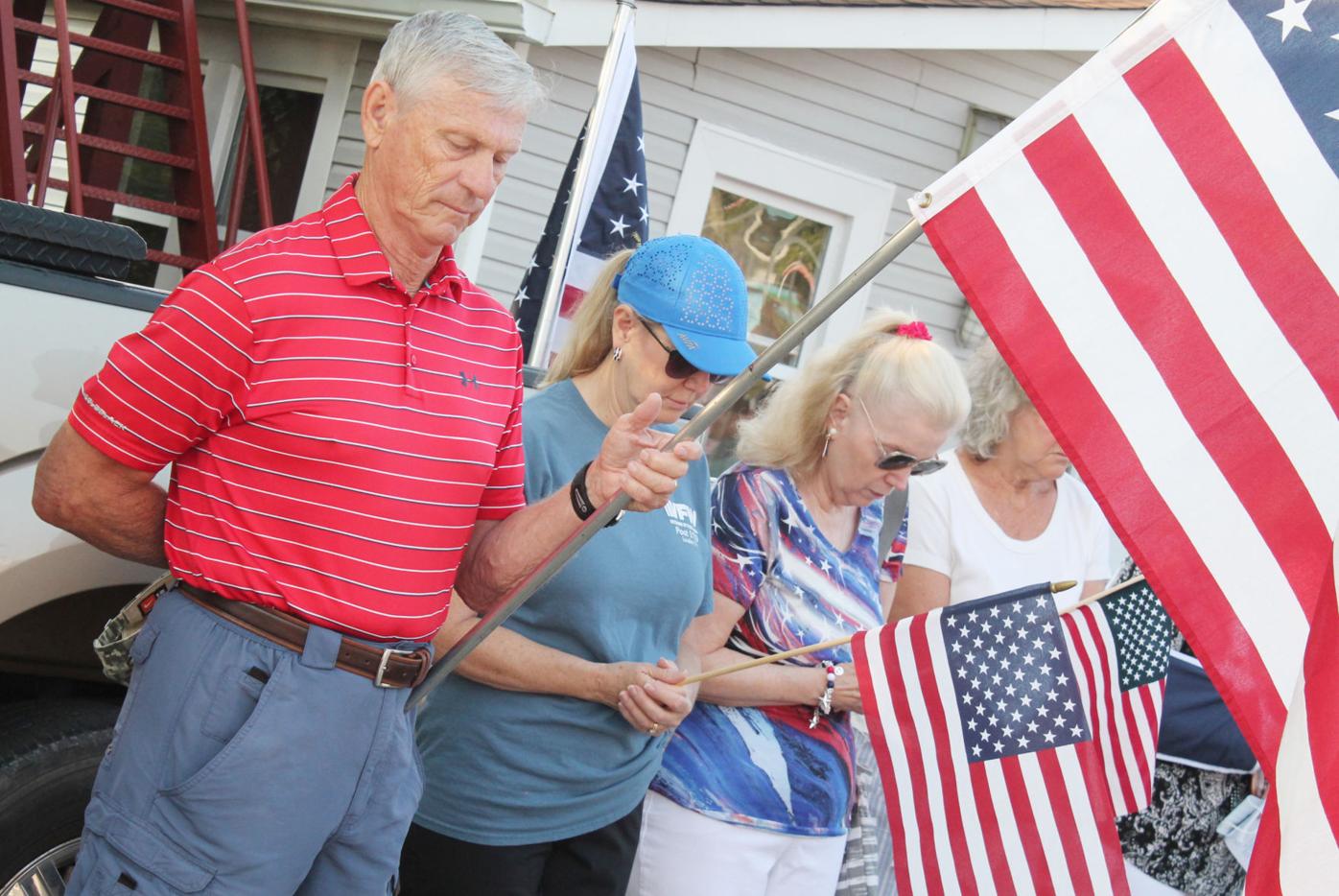 C.W. Brown, from left, Kimberly Brown and Susan Gingrich bow their heads for prayer Friday during a Sept. 11 remembrance ceremony in Loudon. 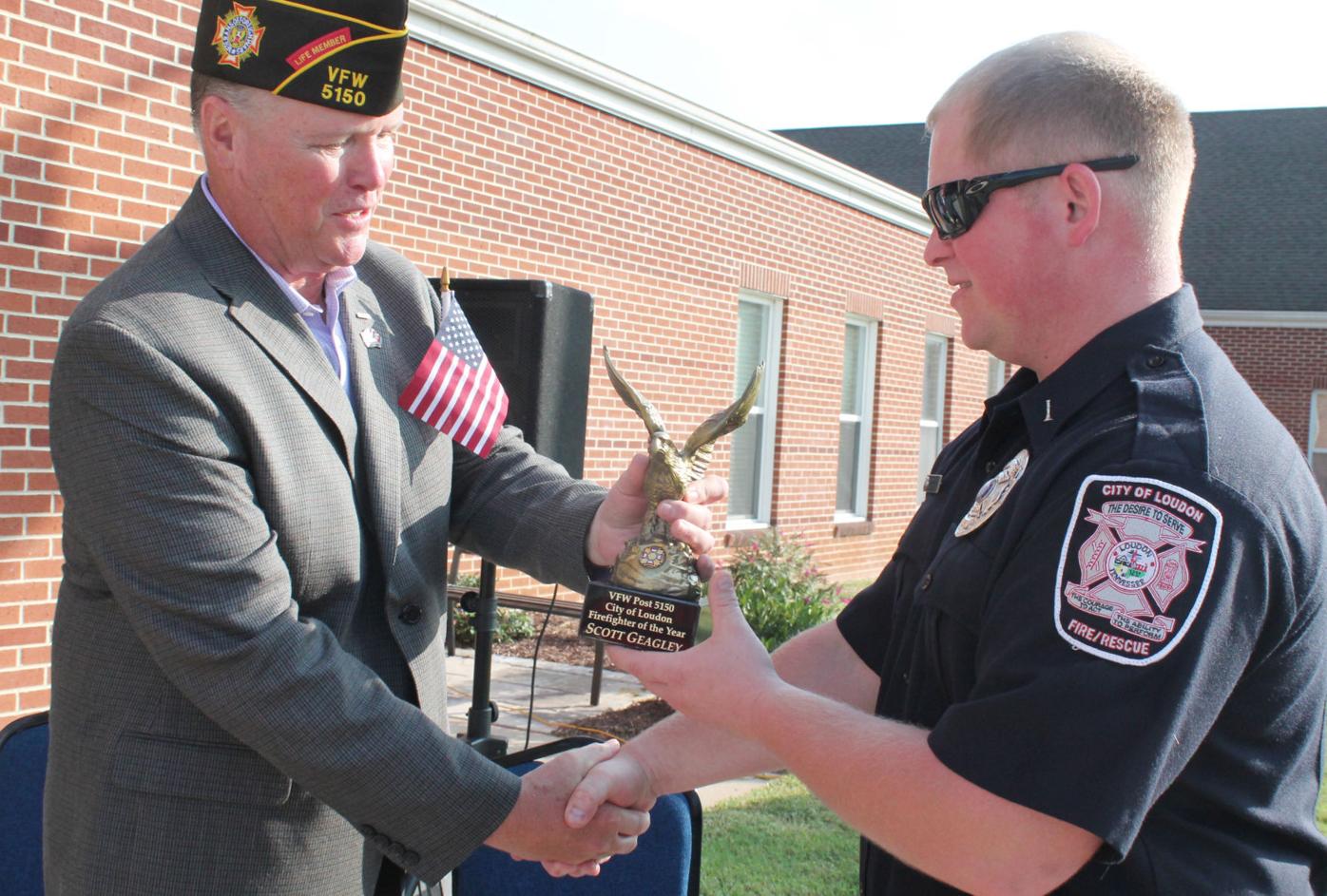 Veterans of Foreign Wars Post 5150 Commander Alvin Wagner, left, presents Scott Geagley with a Civil Servant of the Year award Friday toward the end of a Sept. 11 remembrance ceremony.

C.W. Brown, from left, Kimberly Brown and Susan Gingrich bow their heads for prayer Friday during a Sept. 11 remembrance ceremony in Loudon.

Veterans of Foreign Wars Post 5150 Commander Alvin Wagner, left, presents Scott Geagley with a Civil Servant of the Year award Friday toward the end of a Sept. 11 remembrance ceremony.

A bell rang three times Friday, each representing an attack 19 years ago, as residents gathered in Loudon in remembrance of Sept. 11, 2001.

Local mayors, council members, state representatives and others paid tribute to the thousands who lost their lives and honored first responders outside the Loudon Fire and Police department building. The ceremony was spearheaded by the Veterans of Foreign Wars Post 5150.

“The purpose of today is to recognize all Loudon city emergency responders,” Alvin Wagner, post 5150 commander, said. “Not until we need their services do any of us really appreciate what they do on a day-to-day basis. On Dec. 7, 1941, 2,403 military, including 68 civilians, were killed when the United States was attacked at Pearl Harbor. Almost 80 years later on Sept. 11, 2001, an estimated 2,977 people perished in the attacks on an subsequent collapse of the World Trade Centers, the attack at the Pentagon and the downed aircraft at Shanksville, Penn.

“This included 343 members of the New York City Fire Department and 71 law enforcement officers of the New York City Police Department, port authority and numerous other organizations from New York City and adjoining locations,” he added. “While everyone was running from the attacks, these brave and selfless individuals ran toward the destruction to assist those who needed help. I only mention Pearl Harbor because here it is almost 80 years later and we still remember the events of that fateful day.”

He said he hoped future generations would be taught about historic events like Sept. 11, 2001, just like his teachers did with Pearl Harbor.

Friday’s theme was “United We Stand,” and Wagner hoped it showed Loudon County stood together.

“On that day none of us could have foreseen that life as we knew it was about to change forever,” state Rep. Lowell Russell, R-Vonore, said. “We had no idea that the resolve of this great nation would be tested beyond the boundaries we could have ever imagined. The horror and the despair of that dark day will be seared in our nation’s memory forever. I don’t think any of us will forget the images of the planes hitting the twin towers of the World Trade Center, or the people running for their lives in the streets of New York City, or the first responders who bravely climbed those stairs to save people that they didn’t even know. We will never forget the shock and anger that we felt when we realized it was no accident, that our nation was under attack, 3,000 innocent men, women and children were murdered on American soil that day.”

Loudon Mayor Jeff Harris said he realized how no one was prepared for the tragedy of Sept. 11.

“I got up this morning and went for a run this morning and as I was thinking as I was running, 19 years ago people got up, got ready for work, just went about their regular day,” Harris said. “They had no idea what was getting ready to happen and how the events of that day was going to change their life. You had first responders, firemen, clocking in, checking in, just like a normal day and then everything changed as we know. So I think it’s good that we honor them.

“We just never know what one day’s going to bring,” he added. “It’s like the psalm that tells us to teach us to number our days, and not that we know the number of them, but that we make them count, we make those days count, and I think that’s really important.”

Loudon County Mayor Rollen “Buddy” Bradshaw remembers Sept. 11, 2001, vividly when, while at work, his wife called him to tell him the news.

“Few short months, maybe a year, we were the United States again,” Bradshaw said. “We had one goal and we were united around that goal. Somewhere along the way we’ve lost our way as a country, as a people, and this is a day not only of remembrance, but a day to look back and remember what’s important. My goodness, the debates we debate over now — masks, shut downs — what about that day there? There were no debates. We were united, we knew what we wanted and we were one nation under God again. If you don’t appreciate your first responders, especially through all this, then open your eyes, because they deserve it.”

Arthur Bohanan and Steve Tinder served as guest speakers in Loudon. Both spent time at ground zero in the morgue. They were working for Knoxville Police Department at the time and were part of an emergency response team.

Over an eight-week period, Bohanan worked several hours-long days. He remembers a time while he was in the medical examiner’s office while at ground zero.

“One thing that I’m seeing here today, and it just makes my heart warm, is not only are you making sure that you were in remembrance of 9/11 and all the people who died during that time, whether it be at ground zero or in Pennsylvania or wherever, but you’re also honoring your first responders,” Tinder said. “These people right here in uniform or not in uniform, whether it be law enforcement, firefighters, EMTs, all deserve the most respect that can be given to any group of people.”