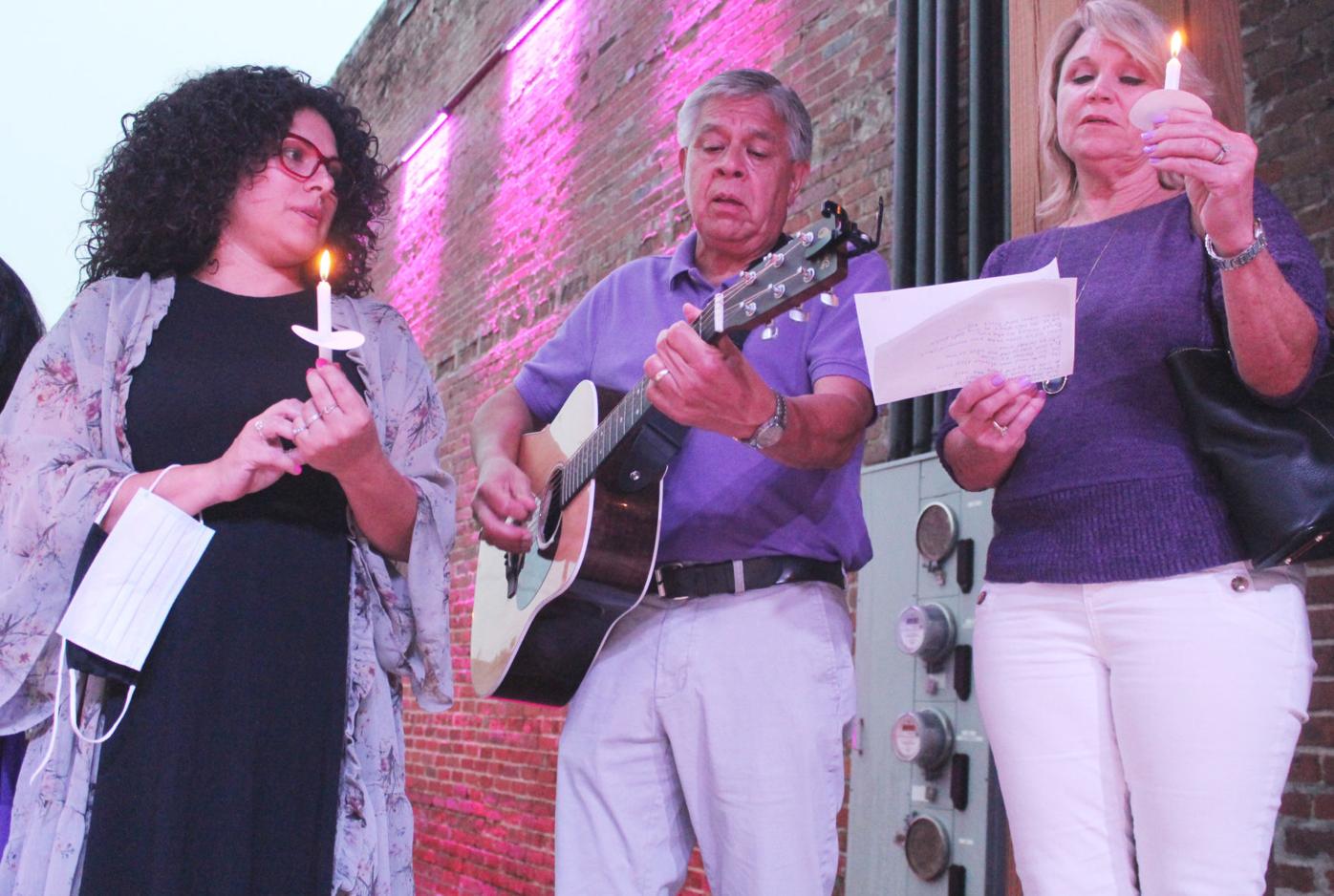 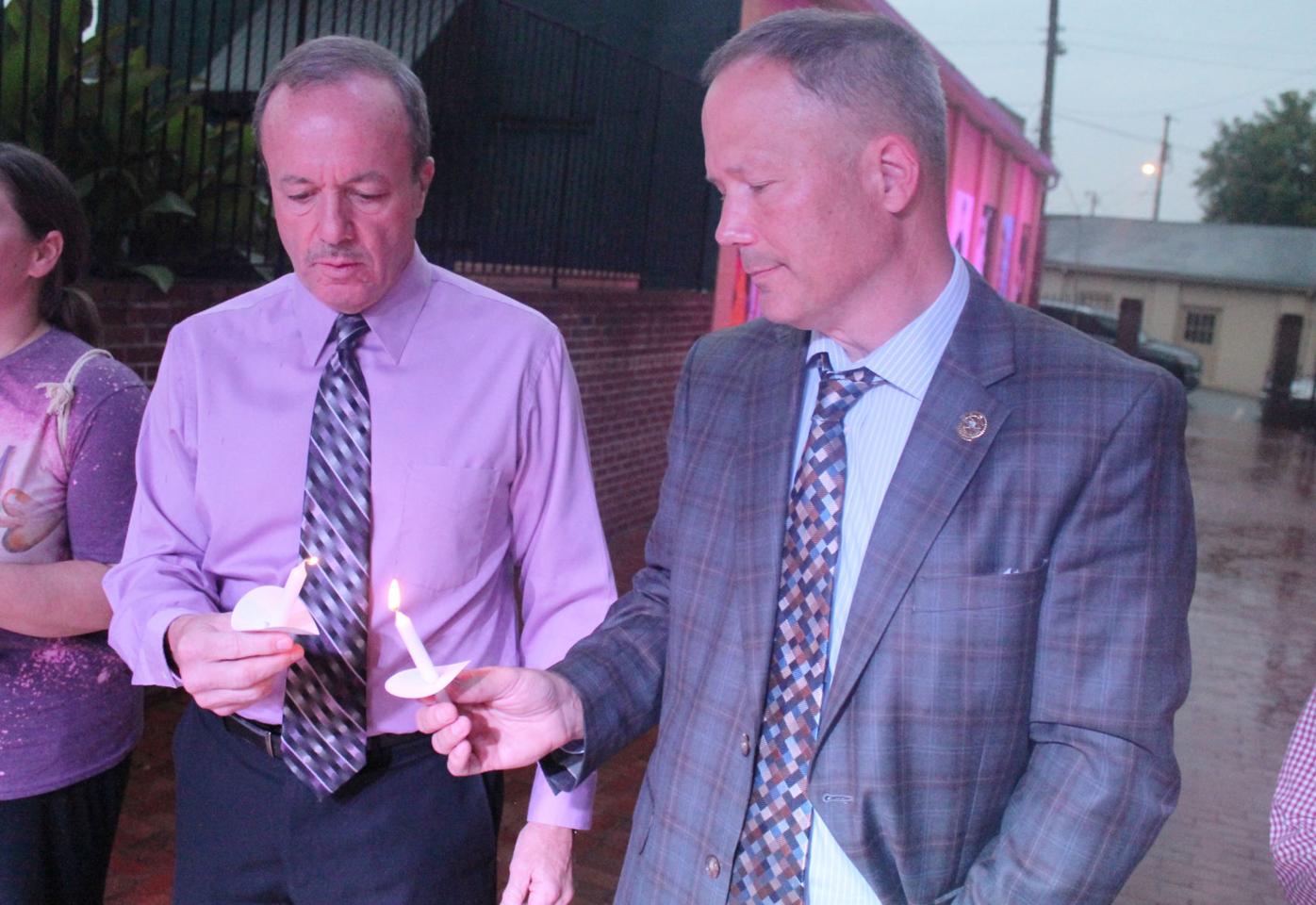 The overall tone was somber as members of the community gathered Monday at the Historic Loudon Theatre in remembrance of those impacted by drug overdoses.

“Our purpose in doing this is to draw attention to those who have lost loved ones because of a drug overdose,” Vicki Cowell, Prevention Alliance program coordinator, said in an email correspondence. “The moment is a remembrance for those gone and to add support to families and individuals who are still grieving in their loss.”

According to the Tennessee Department of Mental Health and Substance Abuse Services, one in six battle addiction in the state.

Jim Carroll, White House director of national drug policy, initiated a Zoom call for the vigil from his house out of state.

Members of the alliance were contacted by the White House at the beginning of August about Carroll sharing a message Monday.

“It is a great honor to have support on a national level, not because of the highlighting of our county, but to expand the impact of the message that the loss is painful and very real; to let anyone who needs help know there are resources and people who care about their future,” Cowell said. “We do not see ourselves in the light of a political context, our focus is on aligning resources for people to overcome.”

Carroll stressed the importance of the day.

“So many parents out there — family members, children — today are grieving and remembering someone that they lost,” he said. “I went to a church on Friday with my wife and found out about there had a funeral there earlier that day for a 17-year-old boy whose parents that go to our church and the funeral was because he had died of an overdose, and while I didn’t know the family, sadly I knew the story without even hearing it. You can only imagine all too well the pain that the parents have and the thoughts that they must have of, ‘What else could I have done differently?’”

He recounted other stories, including his hiring of a father whose child died from an overdose.

“We know the power of God,” Carroll said. “We know that we can turn to him for strength and that is how I try to live my life here and how I try to inspire our folks is to remember that there’s only one thing that matters — that our life, when we are standing there in judgment, we can say, ‘God, I did everything. I left everything on the playing field. I did it all in your name. I did it in a way to save lives’.”

“Not to diminish in any way the serious and pervasive nature of COVID-19, but in Loudon County and the four counties of my jurisdictional district, we have experienced more overdose deaths in the last six months than COVID-19 deaths,” Johnson said.

In the 9th Judicial District this year there have been 34 overdose deaths. Nine occurred in Loudon County, he said.

Johnson credited first responders for helping prevent some fatalities. However, many who survive have subsequent overdose deaths, he said.

“Therefore, it is important we raise awareness for the issue so that people will support efforts to try and stop the trafficking and distribution of heroin, methamphetamine and cocaine that often contain lethal amounts of fentanyl,” he said. “Fentanyl is usually manufactured in China or Mexico and is transported across the borders into the U.S. to be mixed into these illegal drugs. The people doing this are murdering our loved ones, friends and employees.

“So not only is it a psychological and emotional loss of family members, there is a huge financial aspect as it impacts our workforce and leaves children without parents that the state has to help find homes and provide for these children,” he added.

“I think we all need to be reminded that drug overdose affects a lot of people and those effects linger on to the family members left behind, the loved ones left behind,” Harris said. “So I think we sometimes lose sight of that, that they deal with it continuous.”

Paul Franco, who performed two songs on stage, shared his story as a parent with a child dealing with addiction.

“My wife and I have been through every possible phase — denial, outrage, we’re enablers,” he said. “We’ve been broken-hearted, we’ve been desperate. We sent our daughter to several 30-day programs and she would come home clean and we would put her right back in the environment that led to her addiction and we’d expect her to change, but she didn’t.”

Franco said he and his wife made a tough decision 18 months ago. He saw his child arrested and sent to jail. She entered a yearlong program and came back clean.

“In short, this month she will be 16 months free of addiction, free of drugs,” Franco said. “It is not a work of us, right? We just stood out of the way and let God be God. And God rescued her. The great thing about it also is he rescued us.”

Raquel Leal, advisory board member, hoped Monday was a way to open dialogue.

“We want to make it a mission to all those families who lost a person to overdose,” Leal said. “I think the most important thing is the awareness and open conversations with our community is a topic that there is more overdose death than COVID-19. That is not a topic that people want to talk, so I think this kind of activity is a way to open a door to start that kind of conversations. Speaking for the Latino community, it’s a topic that we don’t talk a lot.”

After about an hour, the group went outside to sing “Amazing Grace” and participate in a candlelight vigil.

“Our focus is to spread the message that overdose death is preventable,” Cowell said. “Thousands of people die each year from drug overdose. They come from all walks of life, but many have overcome their addiction challenges and by highlighting those who have overcome, we hope to inspire all to make the step towards ending their dependence on drug usage. But we want to make sure those that are hurting know they are deeply cared about in their community.”