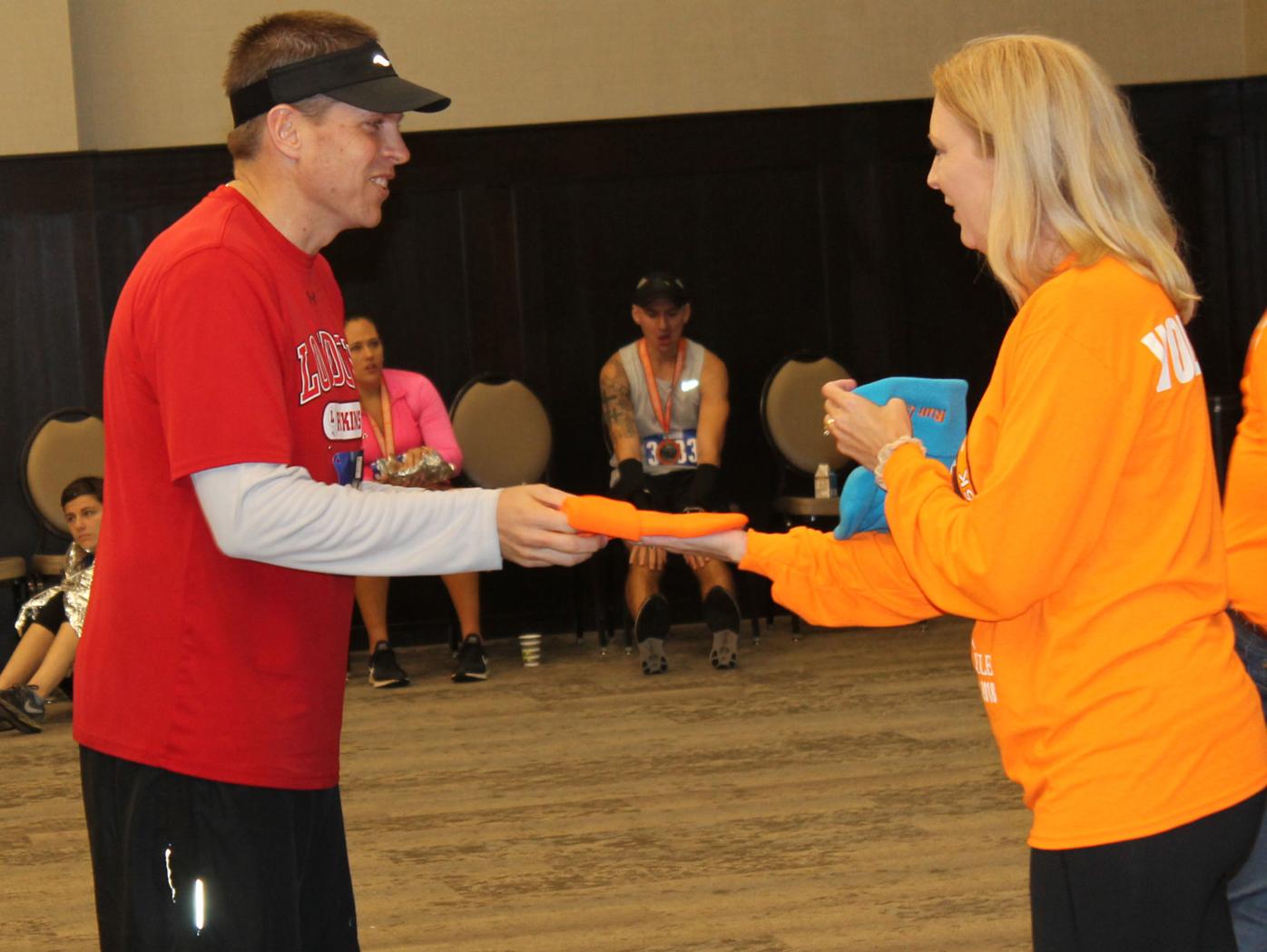 Greg Jameson, left, of Loudon receives an award from Melissa Browder for finishing second Saturday in the Run LoCo marathon. Jameson finished with a time of 3:35:09.2. 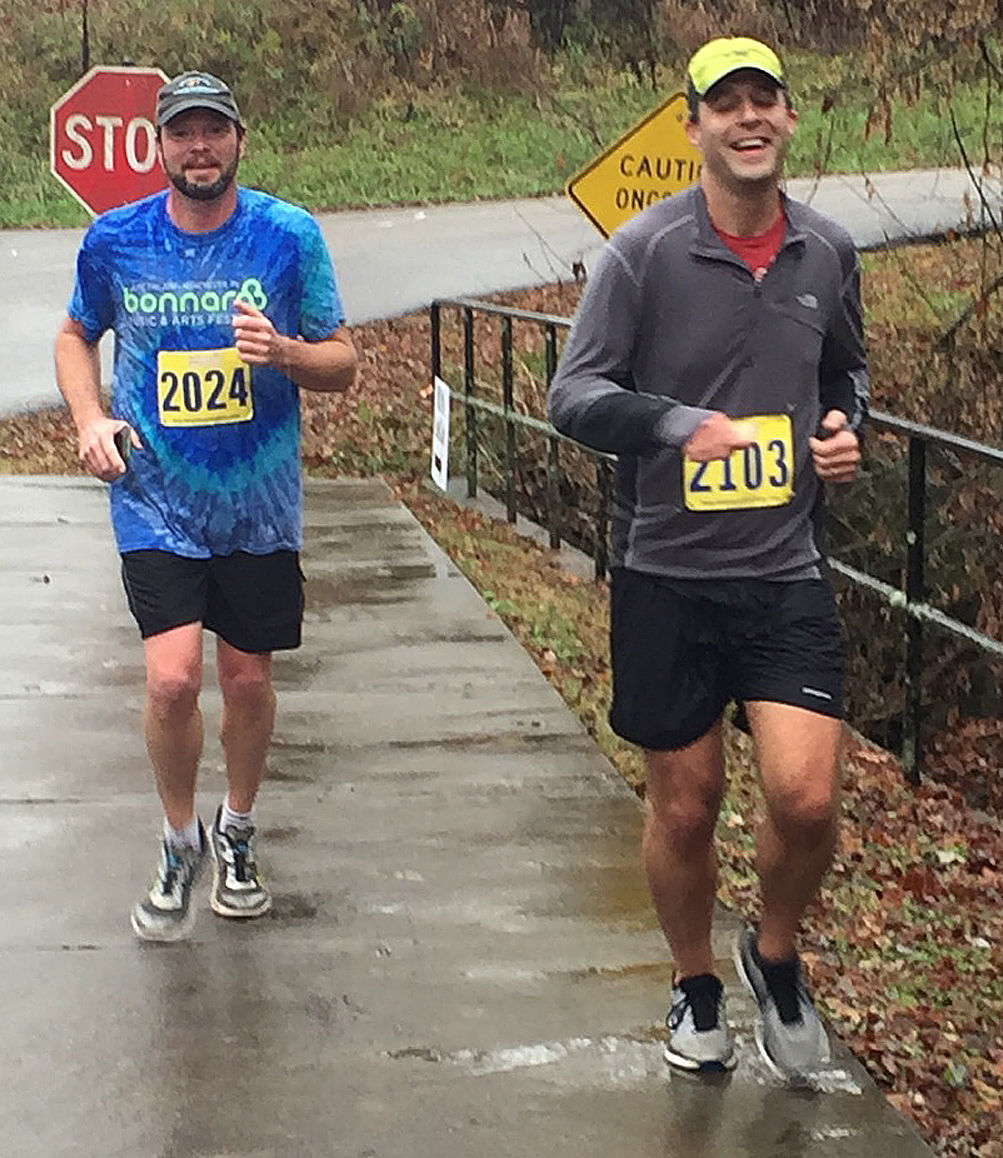 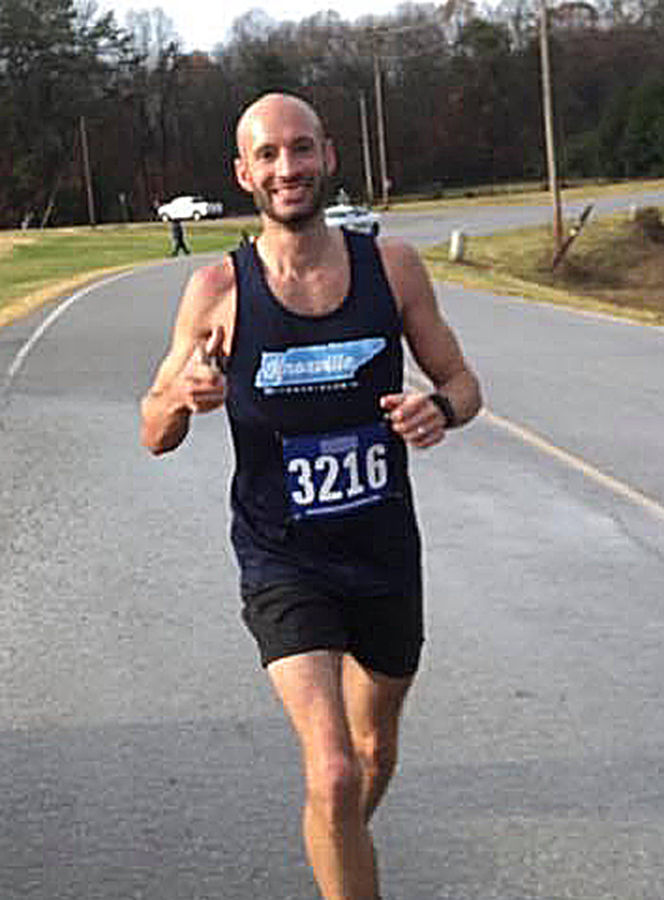 Brian Dixon of Lenoir City passes a checkpoint during the Run LoCo marathon. Dixon won with a time of 2:59:02.9, more than 35 minutes faster than the next runner.

Greg Jameson, left, of Loudon receives an award from Melissa Browder for finishing second Saturday in the Run LoCo marathon. Jameson finished with a time of 3:35:09.2.

Brian Dixon of Lenoir City passes a checkpoint during the Run LoCo marathon. Dixon won with a time of 2:59:02.9, more than 35 minutes faster than the next runner.

Despite rainfall throughout, the Run LoCo marathon, half-marathon and 5K was generally considered a success Saturday.

The inaugural event, organized by the Loudon County Education Foundation, ran from the downtown square in Loudon and wrapped up at The Venue at Lenoir City and required coordination from multiple law enforcement offices to close roads for runners.

Despite challenges, Michele Lewis, LCEF executive director, was thrilled with the final result.

“Even with the weather kind of starting off sketchy, and it’s not really what we wanted, but I don’t think it really held anybody back,” Lewis said. “Everything we’ve heard has been positive. We’ve kind of talked to a lot of runners as they’ve come off the route and they said it’s challenging but they really enjoyed it. They said everything was well-marked and people were friendly. Everybody just seems to have had a great experience and they’re talking about coming back next year.”

Anne Allen of Knoxville, the top female finisher for the marathon with a time of 3:43:21, was one of the runners who shared nothing but positives.

“It was incredibly well-organized,” Allen said. “The volunteers were amazing. It was super cheery out there and the directions of the police officers and how well they had everything marked, it was spot on. It was really great.”

The course was well laid-out, while the rain was not a bother, Allen said.

“It’s a little challenging, I wouldn’t say it’s not,” she said. “The hills, they may not be super steep, but there’s just a lot of rollers so you’re just kind of constantly going up and down at different parts where you may start getting a little drained. … It definitely tests your mental capacity and your will to want to do it. Definitely a lot of people out here did.”

Runners in the marathon were mostly from the greater Knoxville area, but some came from Virginia, Indiana, Texas, Ohio and Wisconsin, which Rachel Baker, Loudon County Visitors Bureau executive director, believes is a plus.

Tate & Lyle served as presenting sponsor for Run LoCo and was pleased to see not only the turnout — a little more than 300 runners across all events — but the response from those involved.

“We’re always proud to be a sponsor for the Loudon County Education Foundation ... any time we can support them in any facet,” Jim Lang, Tate & Lyle technical engineering manager, said. “Today was great. It didn’t look great this morning. I was at the start when it was pouring rain a little bit, but we’re pretty excited about the outcome, pretty excited about the feedback we’re getting so far from everybody. A really well-planned event. Michele and others … did a great job planning it all and it came together nicely. It was a really great event and we’re very proud to be part of it.”

Plans are to host the race next year and beyond.

“We’ve put so much into this year,” Lewis said. “Things like certifying the course cost us almost $1,000. That’s good for 10 years, so we’ve got to do it for at least a couple. … I can easily see that we’re going to grow next year. It’s always tough to predict but I feel certain we’ll hit 500 easy next year and maybe 1,000 after that. All the runners think this is something that could really grow.”

Allen will be ready to return.

“I think just because of how well everything was set up and everybody was so incredibly kind out here,” she said. “Logistically to get from one point to another was fine; it was super easy.”

While there are lessons to learn when putting the event together in the future, Lewis believes the biggest takeaways from Saturday’s race are positives.

“Every experience is a learning experience and there’s going to be a couple of things that we’re going to need to tweak here and there, but for a first-year experience it has been amazing,” Lewis said. “Absolutely nothing went wrong. If I was going to say what the best things were about it, we’ve had so much support. I mean everybody you see in an orange shirt is a volunteer. So the volunteer spirit has been phenomenal.

“The runners have been so positive about their experience on the course,” she added. “I mean everybody has walked around all day today asking, ‘What can I do for you?’ … Our volunteers and our businesses, they really wanted to welcome this event and these people into Loudon County and they want them to come back. That’s outstanding. If anything, I learned that the volunteers we were counting on to help us make it a success came through for us.”