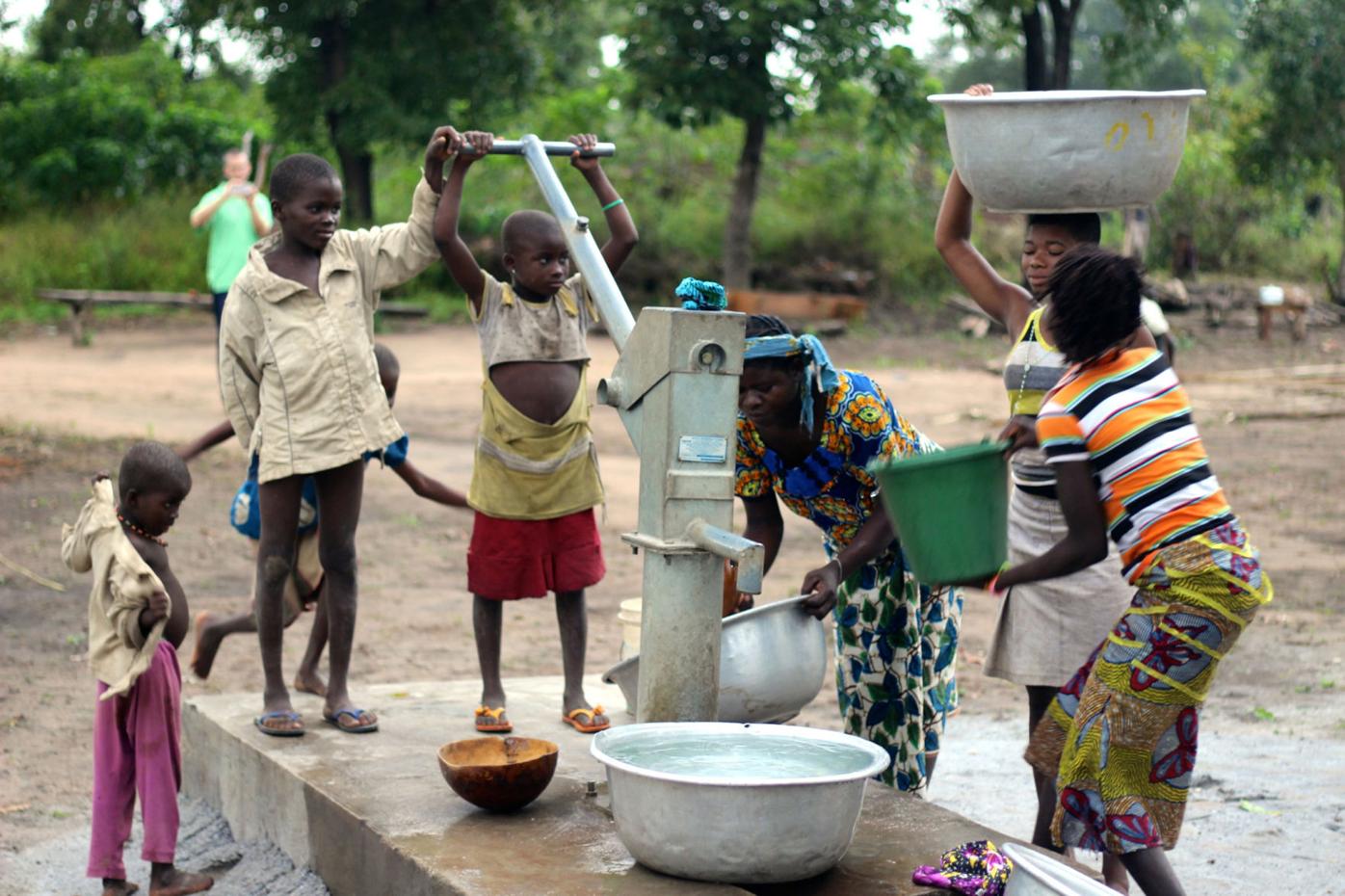 Residents of Deti, a remote village in Ghana, West Africa, use a water well installed by Feeding the Orphans. 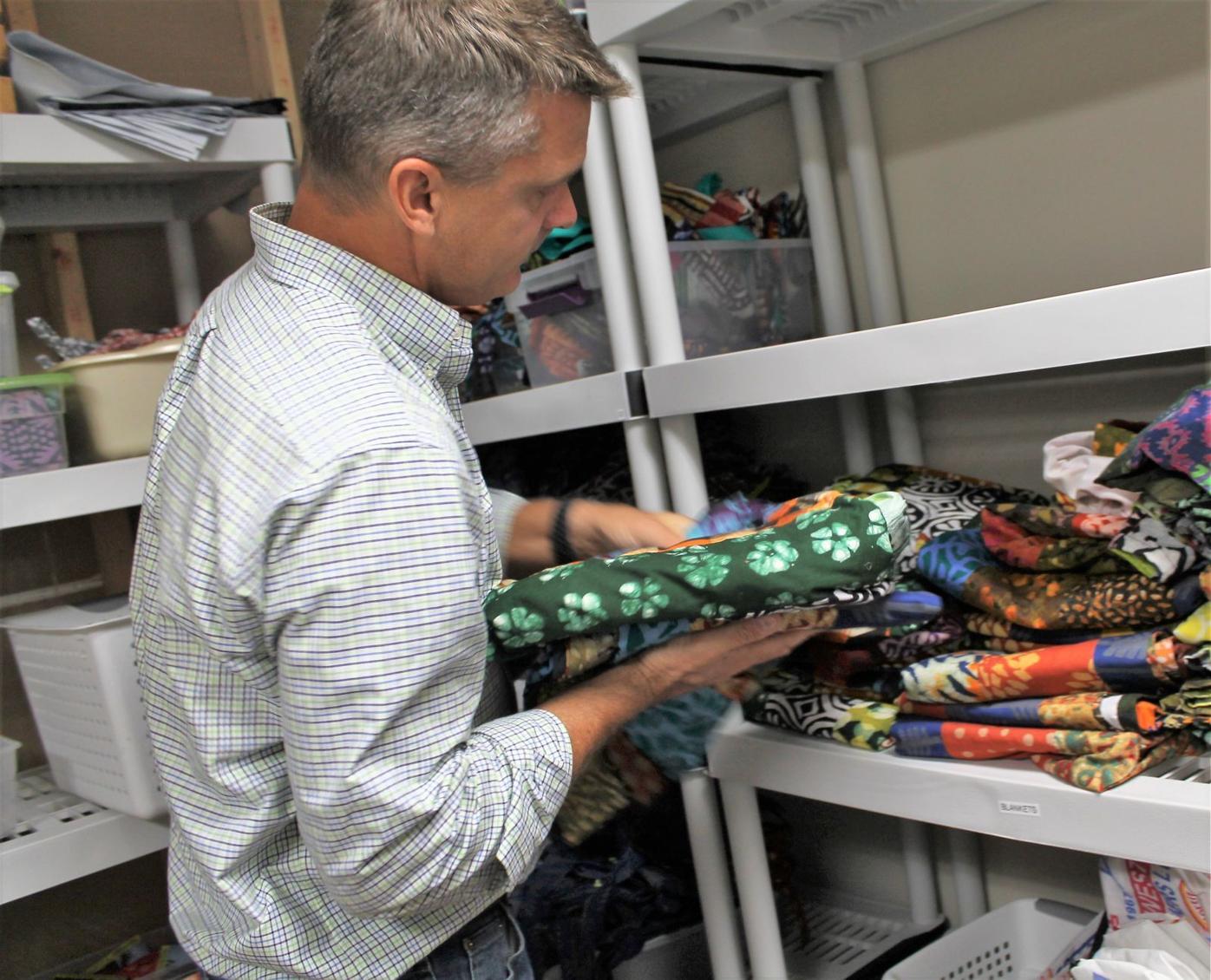 Righ O’Leary, Feeding the Orphans executive director, sorts through handmade items FTO bought from single mothers in Africa in order for them to support their families.

Residents of Deti, a remote village in Ghana, West Africa, use a water well installed by Feeding the Orphans.

Righ O’Leary, Feeding the Orphans executive director, sorts through handmade items FTO bought from single mothers in Africa in order for them to support their families.

When Loudon County native Sydney O’Leary was a girl, she started a T-shirt fundraiser to help orphans in Ghana, West Africa, not knowing it would become a much larger nonprofit organization a decade later.

At age 7, O’Leary decided she wanted a little sister. She asked her parents daily for a sibling, and they said all she could do was pray about it. For three years, she prayed every day for a little sister.

Her parents began the adoption process of a sibling set — a boy and a girl — from Ghana.

“In the middle of that process, we got our very first pictures of my new siblings, and my little sister was almost 3 and had a tiny piece of bread in her hands,” O’Leary said. “The orphanage director said she hadn’t eaten in weeks. When she got there, she was hungry, malnourished. She had a big belly from worms and all that stuff, and she was just hungry holding that piece of bread, looking down at it. I saw that picture and looked at my mom and said, ‘This is not OK.’ At 10, I just realized everything I had and looking at her and realized she didn’t even have enough food to eat.”

O’Leary kept the picture under her pillow. After refusing dinner one night — deciding to have only bread and water — O’Leary’s mother asked why she wasn’t eating.

“Why should we eat like kings and queens when they have nothing?” O’Leary said.

The next day, O’Leary said she had a “clear vision of feeding the orphans” from God.

“He told me to design a T-shirt and put those words on the front — ‘Why should we eat like kings and queens’ — and then some Africa facts on the back,” she said. “My goal was to sell that shirt and raise $800 and send it with my parents when they went to pick up my new siblings. But within two months, God had raised $8,000, so he kind of took my tiny dream and blew it up crazy big.”

She also started a blog, “Feeding the Orphans,” which is where the nonprofit got its name.

During the family’s first trip to Africa to pick up O’Leary’s siblings, they met various orphanage directors and pastors they still work with today.

Now 21 years old and playing basketball at Bryan College, O’Leary isn’t as involved with the organization as she’d like to be but talks to her partners in Africa every day and FaceTimes with kids in the orphanage once a week. She also helps her mother reply to emails and keep up with social media.

Righ O’Leary, FTO executive director and Sydney’s father, didn’t think much about his daughter’s fundraising effort in the beginning.

“I didn’t pay a whole lot of attention to it other than encouraged her … but I certainly was not thinking about a vulnerable child halfway around the world,” Righ said. “I was thinking about me and my own, building my own kingdom. Then it progressed, and 2 1/2, three years went on, and I watched my wife and daughter just pour their hearts and lives and countless hours into it. Then I remember I was on the road, I used to travel all over the country in my previous work, and I felt like the Lord was calling me into ministry.”

Righ eventually quit the corporate job he held for 20 years to work full time at FTO. The endeavor has been the “most rewarding but definitely most challenging” experience.

The organization has about 80 employees in Africa. FTO operates under three “tenants,” Righ said. The first branch is orphan care, which involves feeding, educating and discipling 550 orphans in Ghana and Togo. The second branch is family preservation in which FTO supports families through education and food who would otherwise try to send their kids to the orphanages. The third branch is the water well program. FTO builds water wells in remote villages that don’t normally have access to clean water.

Sydney set out with intentions to help a few children like her brother and sister, but never thought FTO would grow.

“So Sydney — she’s 21 now — she’s always been a very stubborn, strong-willed child, tested our patience, but a lovely, wonderful little girl, but always very strong willed and stubborn,” Righ said. “At the age of 7, I still remember her sitting in front of the computer, and she would just watch for hours these videos of little orphan kids. She would just cry. I mean literally sit as a 7-year-old and weep over just vulnerable children that were hurting. I didn’t understand it. My wife didn’t understand it. We didn’t instill that in her. It was all of the Lord.”

After Sydney’s three years of praying for a sibling, Righ and his wife also prayed and took the leap, not knowing what would come next.

“I never foresaw the radical impact that the obedience of a 10-year-old little girl would have on not just a family but on a whole culture,” Righ said. “… I never thought it would change my life as it has. I never thought I would quit my corporate job after 20 years and run a nonprofit. I just had no idea what God was up to and still don’t know. It’s just the beginning.”