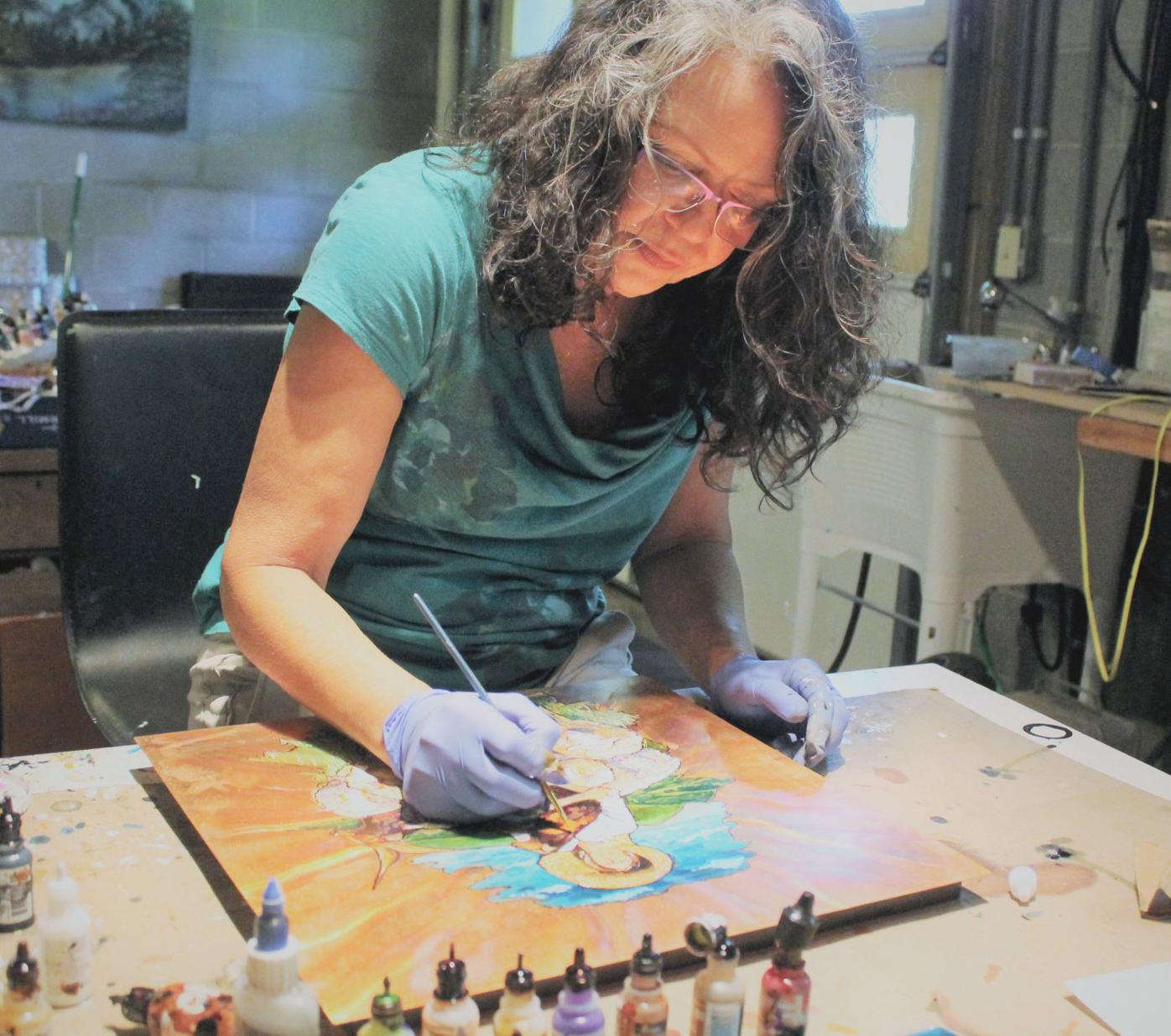 Tina Brunetti puts the final touches on a commissioned piece. 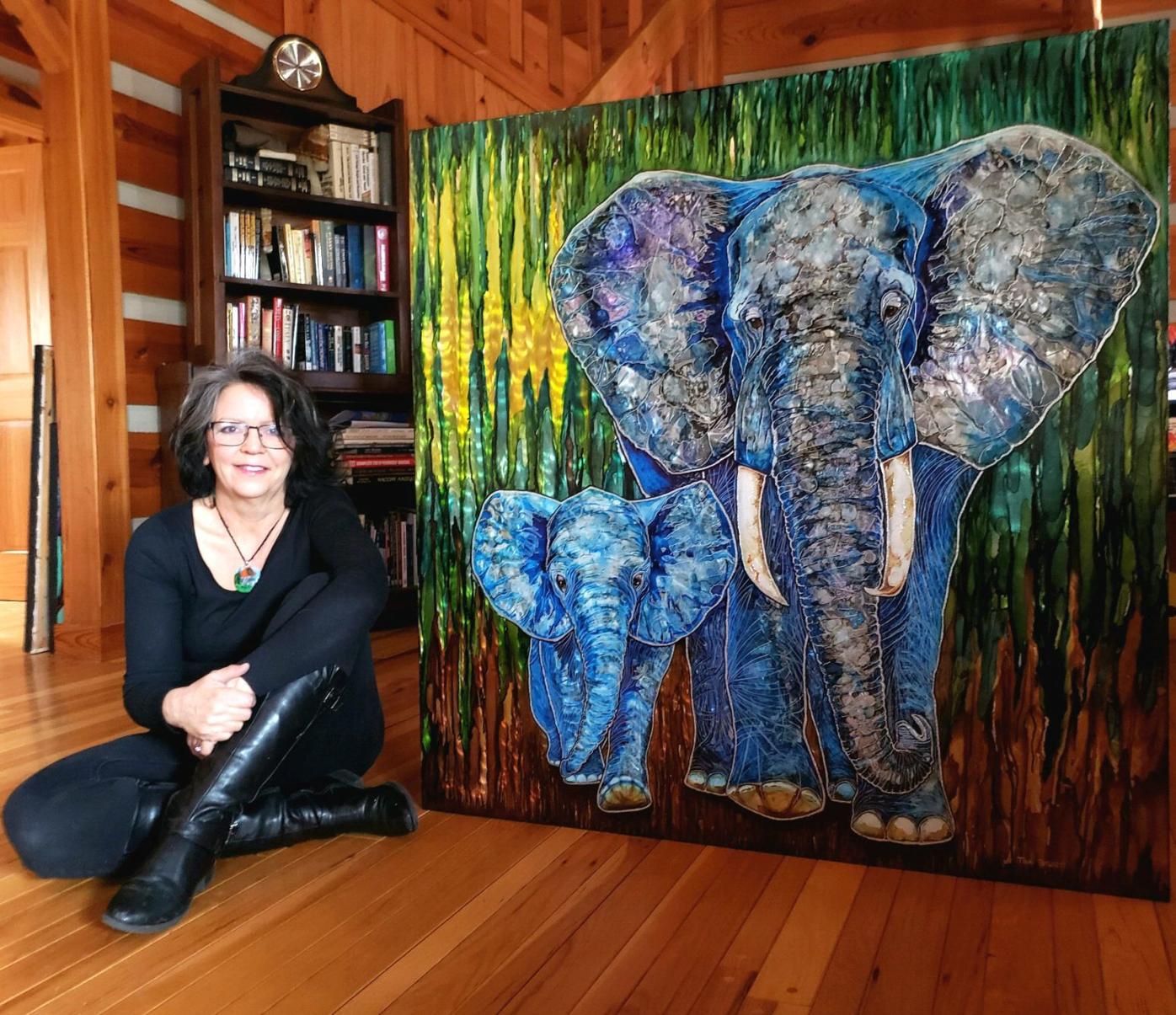 Tina Brunetti puts the final touches on a commissioned piece.

Brunetti has doodled since she was a little girl, but she never received a degree in art. The extent of her training comes from extracurricular art classes in high school and college and classes taken on her own. Her love of art stems from her Catholic background in St. Louis, Mo.

“We used to go to church every Sunday, and with my hearing impairment, I couldn’t really understand what the priest was saying, and also because he spoke Latin sometimes,” Brunetti said. “I thought, ‘I’m not getting anything out of this.’ I was just a little girl twiddling my thumbs, but the highlight actually was in Sunday school. We would do a coloring book, and the coloring book was about the life of Jesus, and I would color all the time.”

Brunetti’s mom bought books on how to draw cartoon characters, and she kept drawing. High school classes taught her how to paint, and when she went back to drawing and sketching, she got into Native American profiles. Brunetti said Native American culture has always been fascinating because of the connection she feels through the appreciation of land and animals.

When David Watson, Brunetti’s husband, saw her paintings at a gallery, he understood her talent. Brunetti found her support system.

“She was applying for a grant from vocational rehabilitation because of her hearing impairment,” Watson said. “So she had to write a business plan and all this to get a grant to try to start up an art business. So that was one of the things that got her going, because she actually won it, so she could buy a tent and all that that you need at an art fair and supplies and things. So that kind of jump-started her business. So you have to do it for a while and show them you can make a profit and she was able to show them that and that’s why she was able to keep the money.”

Brunetti was the first person in Tennessee’s vocational rehabilitation program to receive the grant and keep the money.

She had a booth in Loudon at The Red Door Gallery called Brunetti Confetti Art where she sold paintings and Watson sold jewelry he made from small prints of her paintings. One of her friends at the gallery told Brunetti about an art class in Oak Ridge where he could teach her how to paint water — something Brunetti struggled with.

A Dremel is an engraving tool that adds fine lines once paint is on the metal, which allows detail in Brunetti’s work that most people can’t achieve, Watson said. The idea to use metal came from a visit to Key West, Fla.

“There were art galleries there, and they were doing some things with metal, not alcohol ink, but some weird things like taking it down and letting it set in the ocean and letting barnacles grow on it and stuff. From there it just kind of clicked,” Watson said.

Brunetti started using aluminum and steel, but soon experimented with copper and brass. When she does commission work like pet portraits, she will typically use copper because she can torch the metal or soak it in chemicals to give different colors.

She specifically likes to paint endangered animals to raise awareness.

“People are getting better about being more aware, but I just feel like I need to keep reminding people that bad things are still happening,” she said. “There’s still poaching out there. They’re doing what they can, and this trophy hunting business, that should be outlawed, and that’s just the way I feel. I’m not talking about the way they hunt for deer here. I mean, I don’t like it, but I’m talking about the trophy hunting.”

“She makes plaques,” Watson said. “She will research the animal in the painting and sort of describe their habitat and what they do and the status and all that. So people will come in and look at the paintings, but also read.”

Brunetti said sometimes she will also tie in some spiritual relationships with the animals like ones seen within Native American culture.

“It hasn’t been that long in the grand scheme of things, but when we go to the art shows her art is unique in the sense that no one else is doing kind of exactly what she’s doing with that combination of mediums,” Watson said.