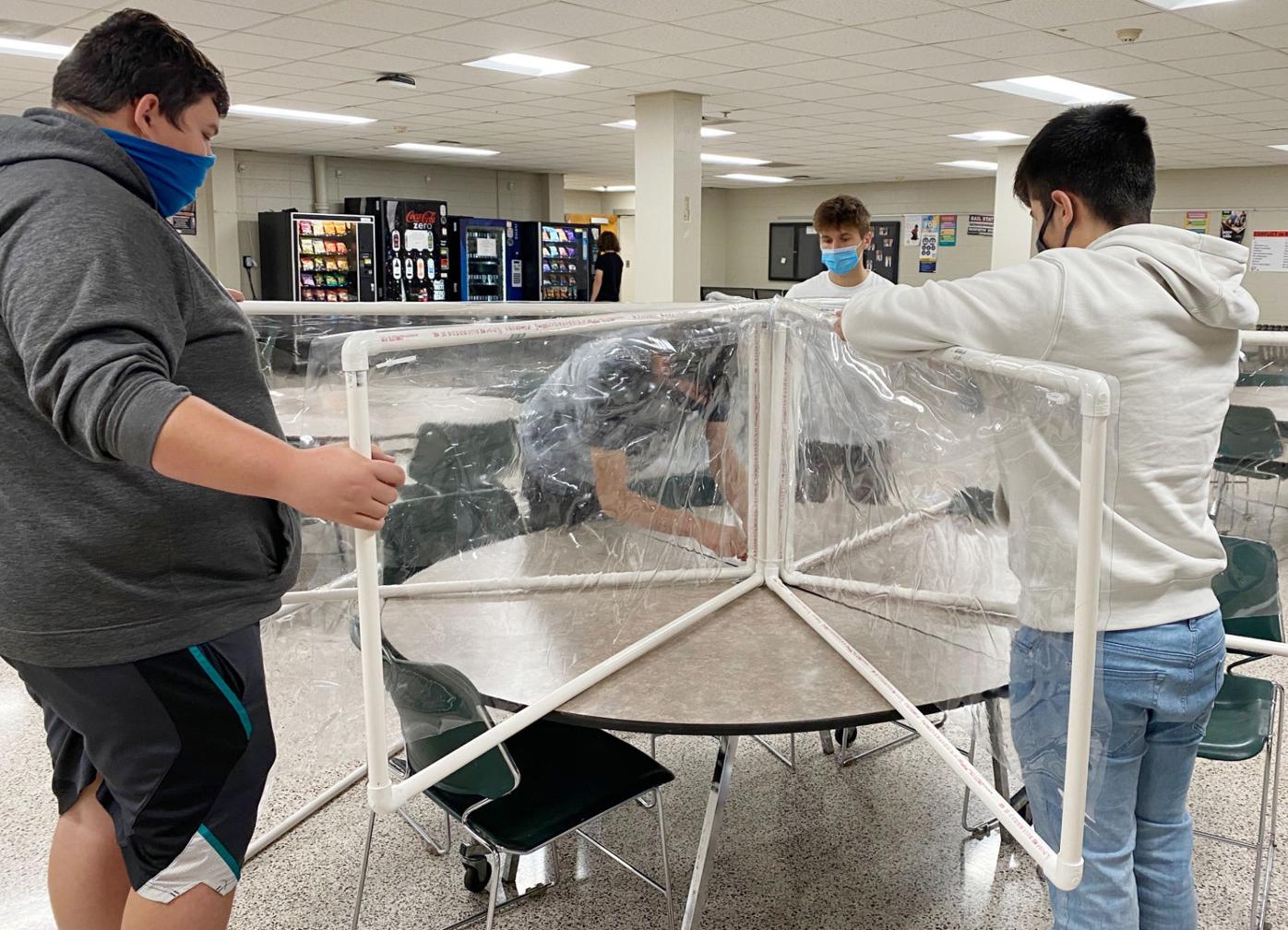 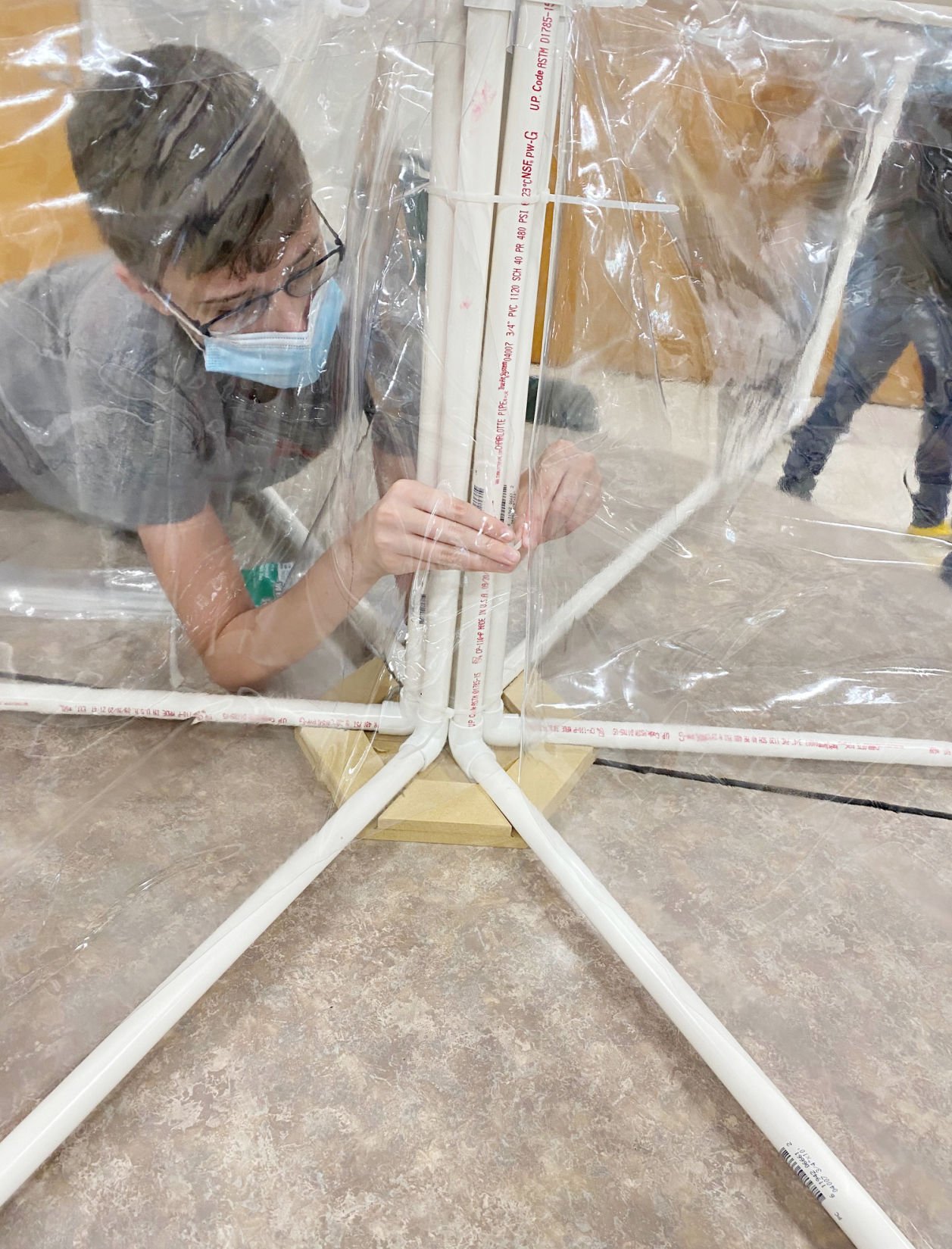 Lenoir City High School has COVID-19 dividers at all tables in the commons and cafeteria thanks to Steven Code’s engineering students.

Each semester Code tasks students with a major project to help the school or community.

Students in three classes worked together at the beginning of the school year to create virus protection dividers. By the end of October, all 60 dividers were in place, Code said.

“Obviously, early in the fall we kind of flip-flopped because we needed something like this right away,” he said. “We pretty much came up with the idea of, ‘OK, we’ve got a got a problem,’ and so then this was our solution to the problem. That class, the third-year class, is the one that pretty much started the design process. They did a preliminary order of all the tables in the cafeteria and the commons. Pretty big job. The first thing we had to do was come up with a better design for round tables because the square design did not work. Then we brainstormed and came up with this design.”

After getting the OK from administration, students went to work on a better prototype and crafted dividers using PVC pipe and painter’s plastic for circular tables.

“The dividers were an interesting process,” Alexander DeRose, LCHS student, said. “I was working as a peer tutor for the class that made the majority of them, so I was kind of heading up the project. On certain days we would do different parts, so on Monday we would build the frames and on Tuesday we would cut the plastic, etc. We formed a sort of assembly line to get them finished. The work was fun, and it was a good learning experience for everyone in the class, and the dividers ended up being useful, however annoying.”

“I learned how to work and be part of an efficient assembly line, while working with others,” Tristan Hirzel, LCHS student, added. “I felt that the best part of the project was putting together all of the dividers with my classmates after cutting the tubing to the right lengths. I feel good knowing I did something to help people stay healthy during the pandemic. I would have to say that the class as a whole learned how to work with each other efficiently.”

“Now the kids can sit where they want to, they’re not locked into a particular table, so it created some freedom for the kids,” Orr said. “Now they would prefer not to have barriers on their table even though they can see through them and they can still talk, but it’s better than what we were at from their perspective and ours.”

Alexander Barton, LCHS student, hopes the dividers will keep COVID-positive numbers down and get people back in school.

Code pointed to students getting more out of the project than just building dividers.

“The critical thinking is the biggest thing,” he said. “The design was part of it, but then what I enjoyed was the discussions and they didn’t come to me and say, ‘Can we do this to make it better?’ They just started it. A lot of just trial and error, what can be (done), test it to see if it can be better on the manufacturing.”

He thanked students in the residential and commercial construction class for providing wooden bases for the dividers and working through requests for changes.

“We look for kind of school-based enterprises and things that our kids that the stuff they’re looking in class they can apply in a real-world application and this was a perfect opportunity,” Mark Weeks, LCHS assistant principal and CTE director, said. “Mr. Code stepped up and said, ‘Hey, why don’t we do this?’ Yeah, I’m very proud of their efforts and just how sharp they are to come up with these designs. Our kids are just really good at what they’re learning and applying what they’re learning. This is kind of the epitome of what is supposed to be produced out of CTE classes. This is perfect.”

Plans are to keep the dividers up through the remainder of the pandemic, Orr said.

Code can’t help but feel proud of students for doing something that makes a difference.

“And they’re proud of it,” he said. “What I look at is when they come through and they see something has come loose and they’ll fix it on their own because they want it to be (nice) because it’s their project. It was interesting, too, because obviously a lot of the kids did not like the idea because it was different. I would overhear them talking, ‘Well, we need to do it for this,’ so they were talking up the project to the other kids.”