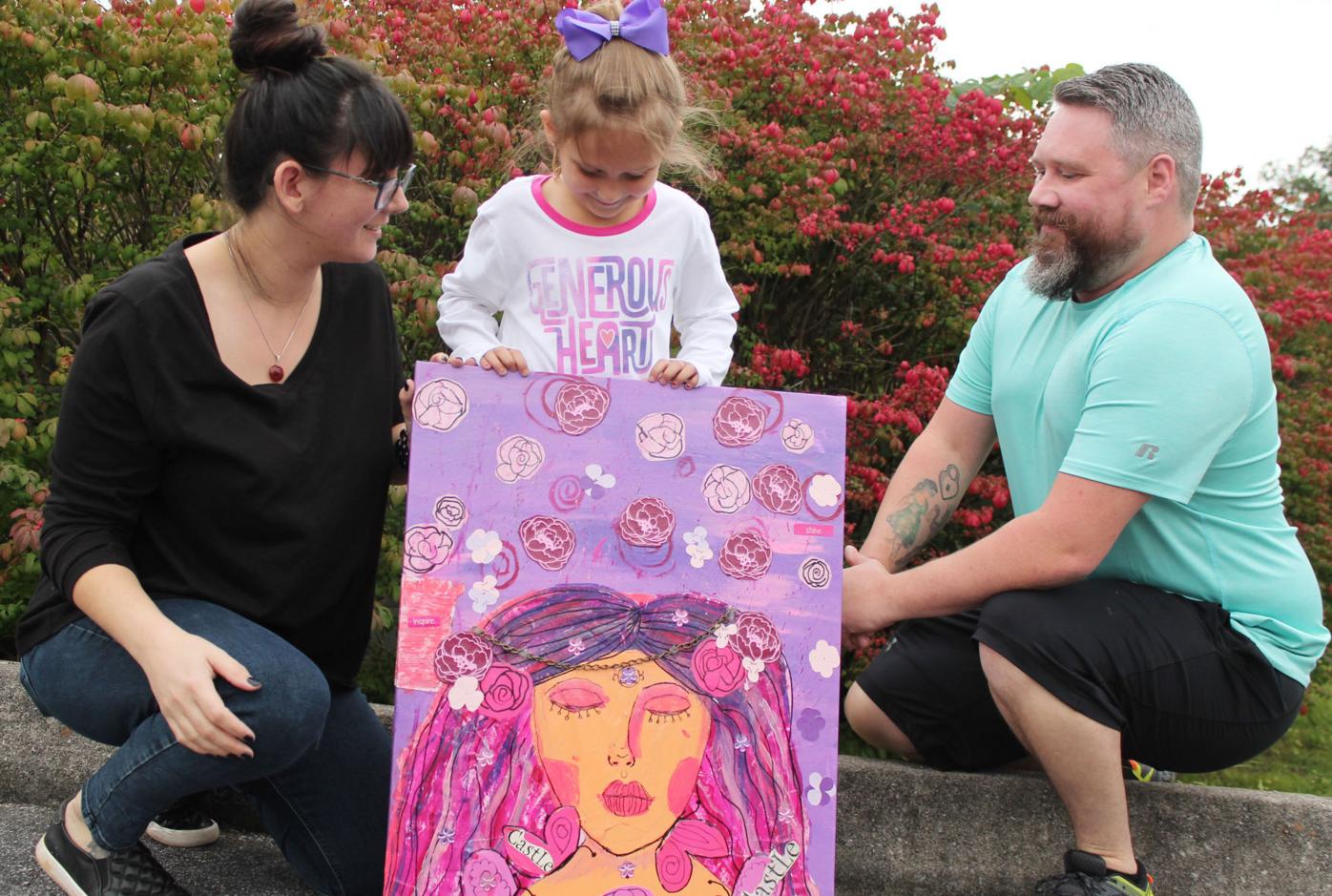 Jude Wiggins, center, show her mixed media artwork she calls ‘The Rose Princess’ to her parents, Britny and Cody Wiggins. 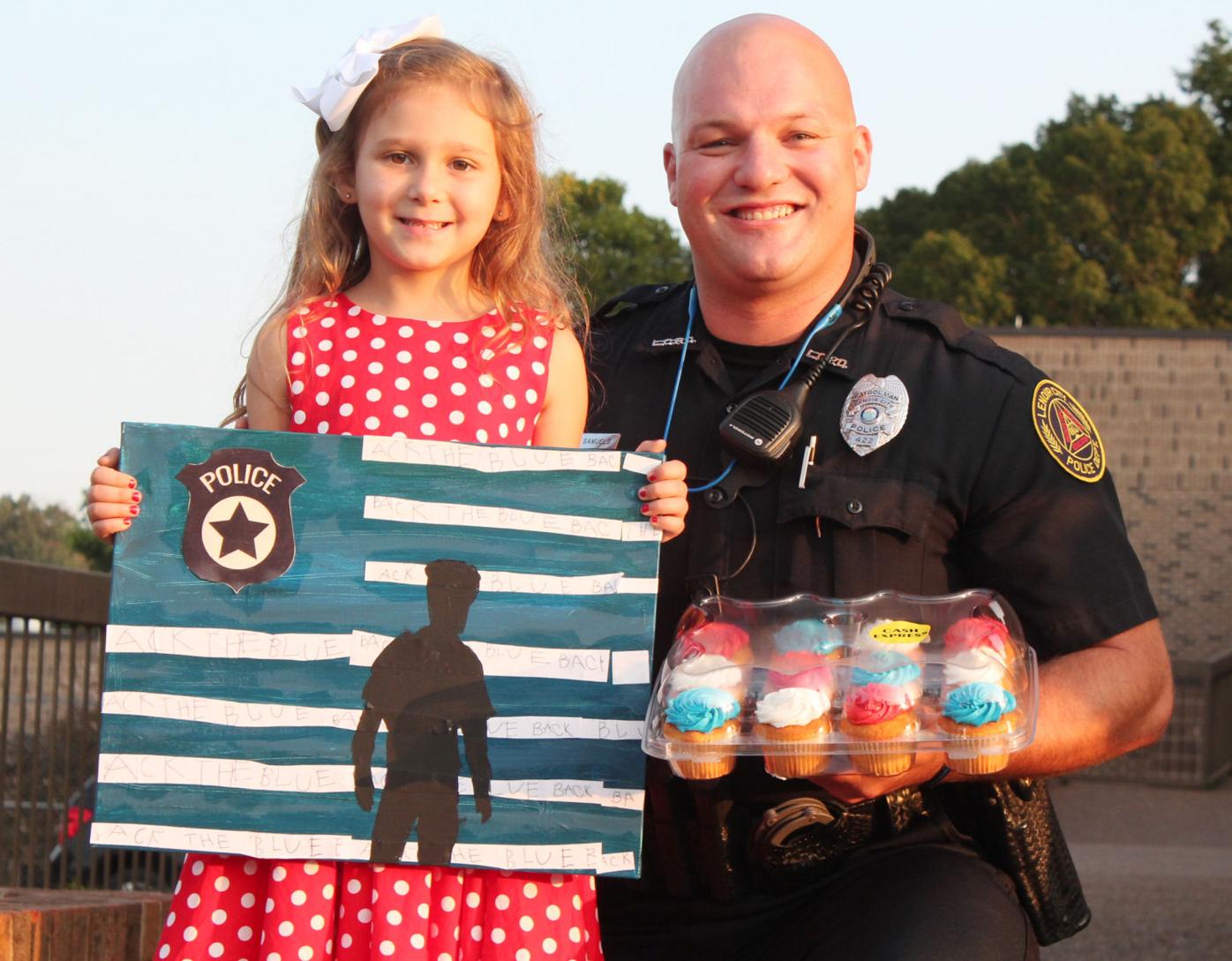 Jude Wiggins, center, show her mixed media artwork she calls ‘The Rose Princess’ to her parents, Britny and Cody Wiggins.

A local 5-year-old girl is putting her artistic talents to good use.

“I started painting about two years ago and she would just sit with me and use some of my paint brushes and things like that and do her own thing,” Britny Wiggins, Jude’s mother, said. “Then it was probably a year into it that I started to notice that she was starting to ask me, ‘How do I paint this?’ or ‘How do I do this?’ So I would show her how, and then she started watching YouTube tutorials (with) Bob Ross.”

Her interest blossomed. For her fourth birthday, she was given an easel.

“The more that she does it, the better that she got,” Britny said. “During COVID, I wasn’t working, so I was able to show her a lot more and kind of explain to her different types of art and do different things with her. That’s where she’s gotten a lot more of her practice was from that. ... Used to I would kind of have to like be hard on her about the way you hold your brush or the way you do something. Now she’ll just say, ‘Can you pull up a picture on your phone of this? I want to paint this.’ ... Or she’ll be like, ‘Can you take a picture of that? I want to paint that later’.”

Seeing their daughter take hold of the hobby is no surprise.

“We do kind of hop around to different arts and crafts and things like that so that kind of keeps her from getting bored with it,” Britny said. “She’ll want to make jewelry one day or coloring a coloring book the next day. I try to keep it mixed up so that way she doesn’t get sick of doing it and it keeps her inspired a little bit.”

“She can dry flowers and she can put them in resin and make a necklace out of them,” Cody said.

“She sold a painting and with the money she bought a kit to be able to make the jewelry,” Britny added.

Jude first sold artwork in June because she wanted to see Bob Ross’ son, Steve Ross, in a class in Maryville. Now all money made goes back into her artwork hobby.

“During COVID I showed her how to do a painting of some flowers that she had done and I posted picture of it on my Facebook page and it was — I’m a nail technician, and one of my customers said, ‘Hey, can you ask her if she doesn’t want to keep that if I could have it?’” Britny said. “She said that she’d pay for it, so it was during that. When we were able to go back to work and I was able to start seeing my clients. I brought it and we were able to sell it.”

Jude recently crafted seven paintings to give to paramedics, firefighters, police officers and dispatchers on Sept. 11.

“I used to work at Cash Express and I guess the lady that set that whole thing up, she usually does posters as ‘thank yous,’ and she asked me — because she knows Jude — she asked if Jude would be interested in doing them,” Britny said. “I asked her and I told her why it was important and if she wanted to do it, I told her it was going to be a lot of work but that she would be doing it from her heart. She said, ‘Yeah,’ so then we kind of took a break from painting all the flowers and things that she wanted to paint and we started looking up ideas on what’s good on a canvas for first responders.”

“We asked her, ‘Why are we celebrating,’ and she said, ‘We’re celebrating my heart’,” Britny said.

That was the first time she had donated artwork.

For now, Britny and Cody said they’ll take a watch-and-see approach on what’s next.

“I think is the first time she’s realized that people — she’s starting to realize that people are taking an interest in it,” Cody said.

Jude said she wants to be an artist when she grows up.

Britny doesn’t know what her daughter will want to learn next. She jokingly said whatever it is, they’ll need to learn how to do it online.

“Get on YouTube, watch videos, and she’s telling me while I’m sitting there looking at what we’re supposed to be doing and how to do it, she’s like, ‘Mom, sometimes these get bubbles in it, and you’re supposed to do this’,” she said. “She’s already researched it before I’ve even had a chance to even look at it. She knows more about it than I do.”

To keep up with Jude, visit Jude’s Journey Facebook page at www.facebook.com/JudesArtJourney.