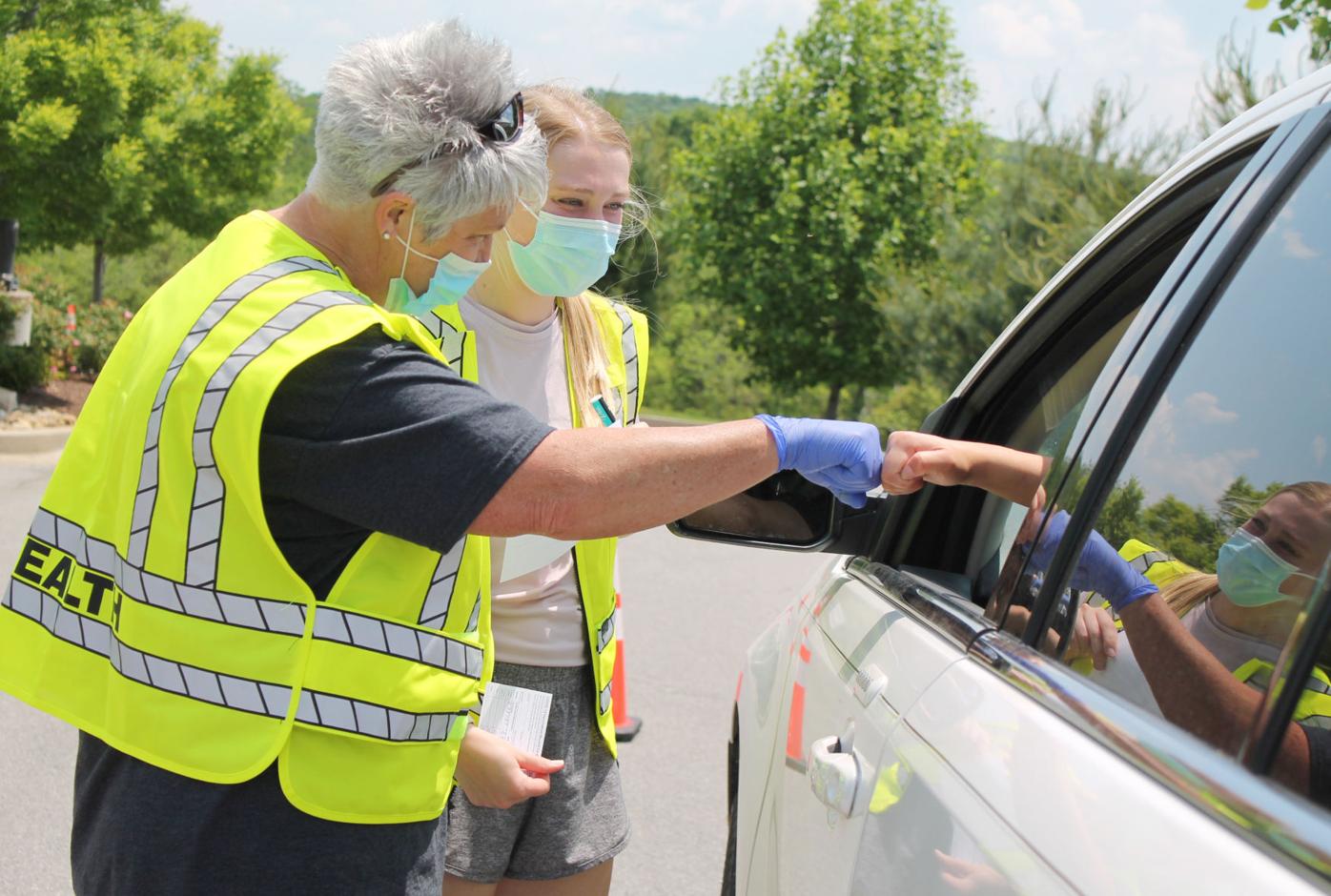 Summit Medical Group’s Judy Dyer, with University of Tennessee medical student Anna McQueen by her side, fist bumps a driver while waiting for a COVID-19 vaccination. 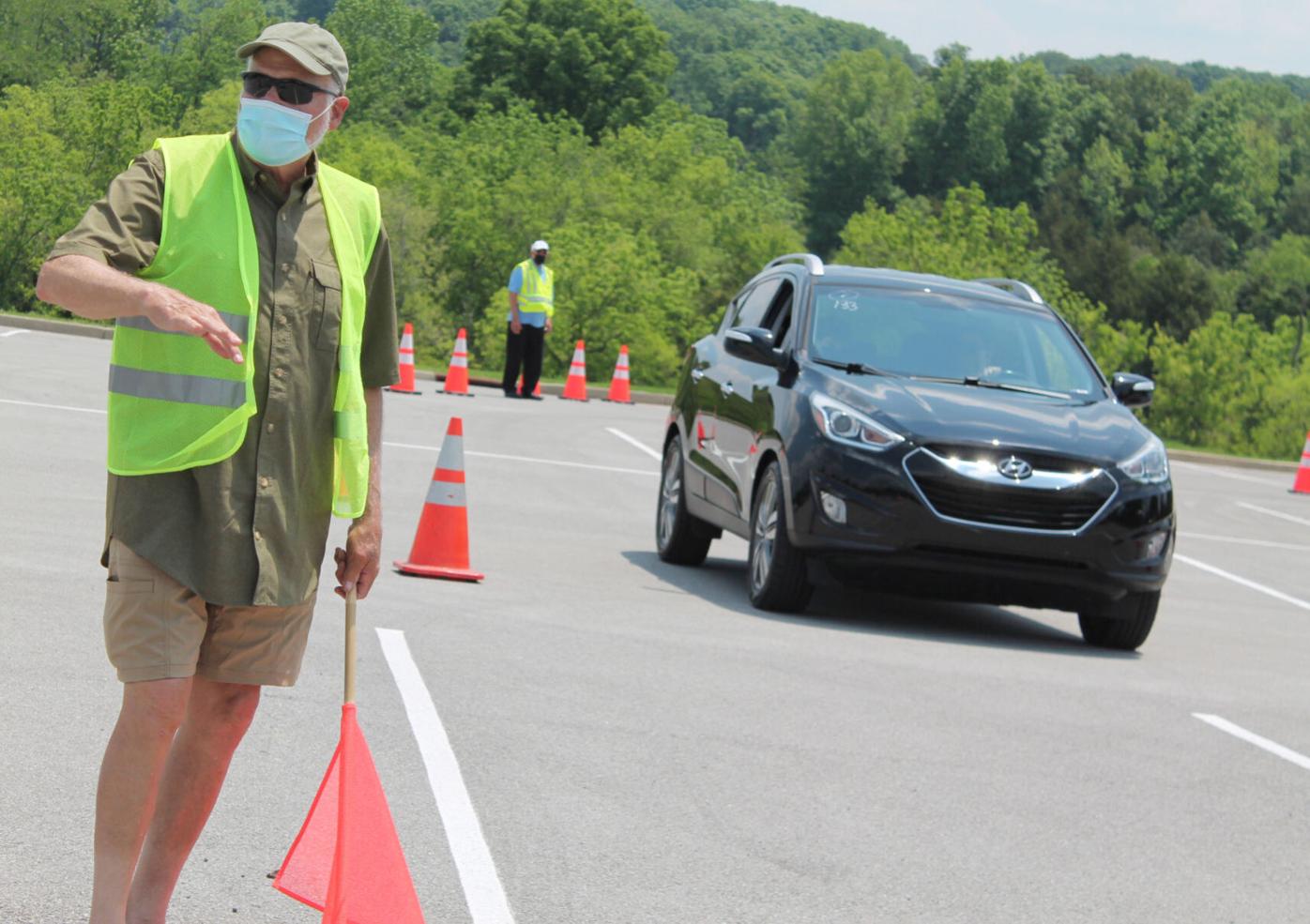 Summit Medical Group’s Judy Dyer, with University of Tennessee medical student Anna McQueen by her side, fist bumps a driver while waiting for a COVID-19 vaccination.

Teresa Harrill, health department director, said about 26 people registered in advance, but others were welcome.

“The club really is looking to reach out in diversity,” Jan Berry, Lenoir City Rotarian, said. “I have the new badge here of the Rotary. You see it’s a helping hand for the world, and that’s why I love Rotary is because it is really doing the best to diversify and help people in need. Clearly we have 4,000 Hispanic people in Lenoir City and we were concerned that perhaps they didn’t have access to the vaccine, and so we set up this event after having spoken to some people in the Hispanic community to determine if it was really a need.”

“For elderly people, 1,000 shots is 100 fewer hospitalizations and 10 saved lives,” Montgomery said. “That’s enough reason all together. But this is the only way that we’re going to get ahead of this — the masks, the distancing, washing hands — that’s great, but this is a 95% effective vaccine. There’s very few vaccines that are this effective, and 10 days after the second vaccine there’s a 95% chance of having immunity to this virus.

“... Everybody I know that wants one has probably now had it,” he added. “We’ve given 9,000 at one place in Summit. We’ve had very little problem from it. Some people get a sore arm, yeah, that’s part of it, but that’s not near as bad as being on a ventilator. This is the way it happens; the community has to get together to do this thing to make it happen.”

Sunday offered convenience for some who can’t take time off from work.

“We’re not trying to change anybody’s mind, but this is a Sunday and we are saying — we advertised insurance isn’t necessary, this is free,” Ross said. “So many people who walked into a pharmacy and they said, ‘Show me your insurance card’ and they didn’t have insurance, they walked out. It’s for people who have just not had access, or it’s a Sunday afternoon and have had work issue, or on Saturday and exhausted from work so they put their week up on Saturday.”

Harrill hopes to focus on those as young as 12 years old.

“I think we really also want to hit the people 12-plus,” she said. “We haven’t had a lot of takers from the students 12 and up, so hopefully we thought today might be an opportunity that parents might bring their children out. I think it’s to the point now that we’re going to have to go to the communities rather than the communities coming to us.”

Other than reaching out to some businesses and local apartment complexes, Harrill said Sunday marked the first community-wide vaccination event outside Loudon Municipal Park. Vaccinations will continue to be offered there for “a couple more weeks” before staff will “more than likely this summer” move back to the health department with demand not as high.

According to the Tennessee Department of Health, there were 37 active cases of COVID-19 in Loudon County on Monday.

Harrill had no definitive outreach plans besides the June 13 vaccination event at The Venue.

Harvey Phillips, Tellico Lake Rotary Club member, helped monitor people as they waited for possible side effects. He said the vaccination event fell in line with what club members wanted to do to support the community.

“We considered the day a success though we had hoped for more people, especially younger people who can now take the Pfizer shot,” Ross said Monday. “If they get the shot now, their school year will be much closer to what they remember as normal.”