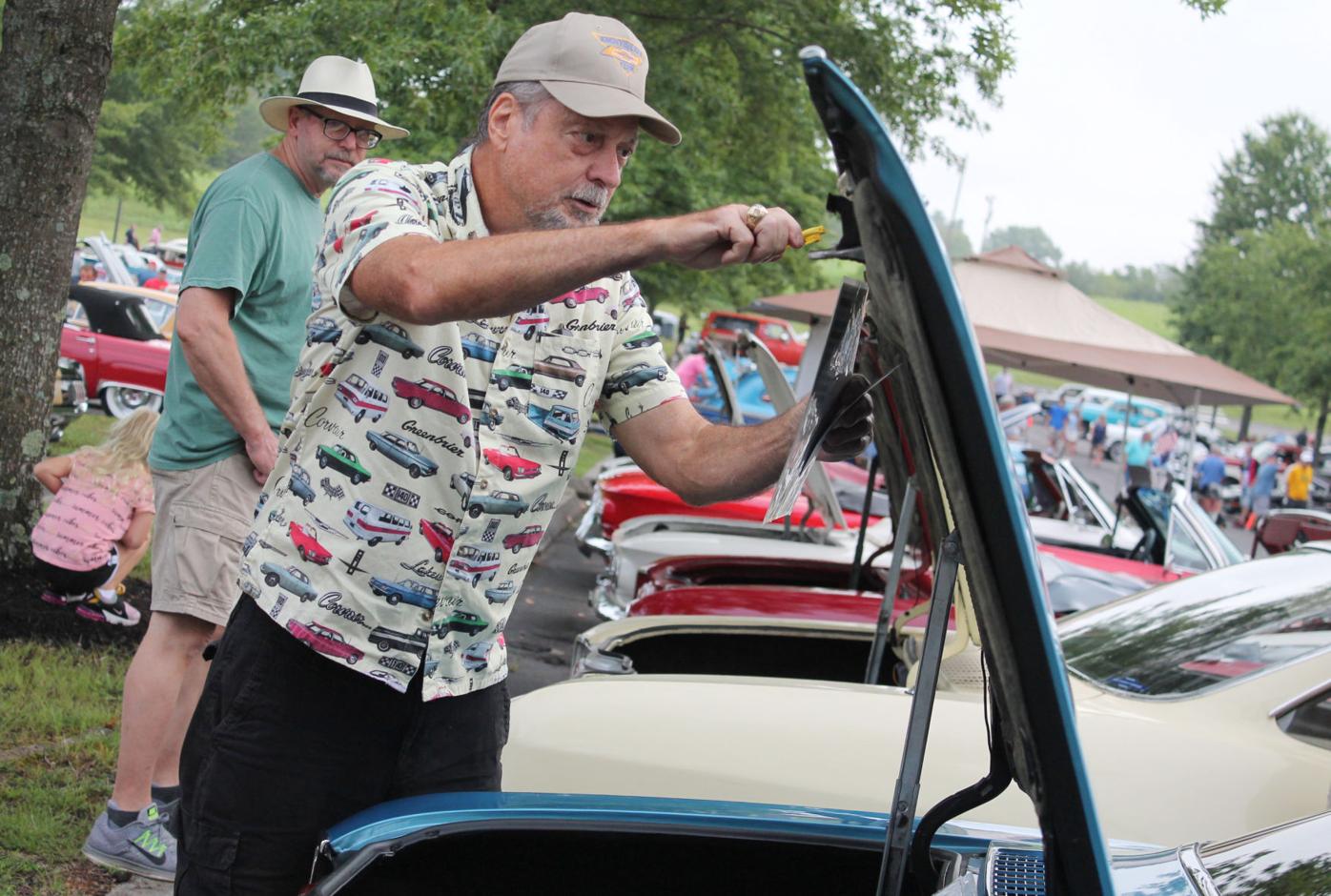 Steve Phillips gets his 1968 Chevrolet Corvair ready for the cruise-in Saturday at First Baptist Church in Lenoir City. 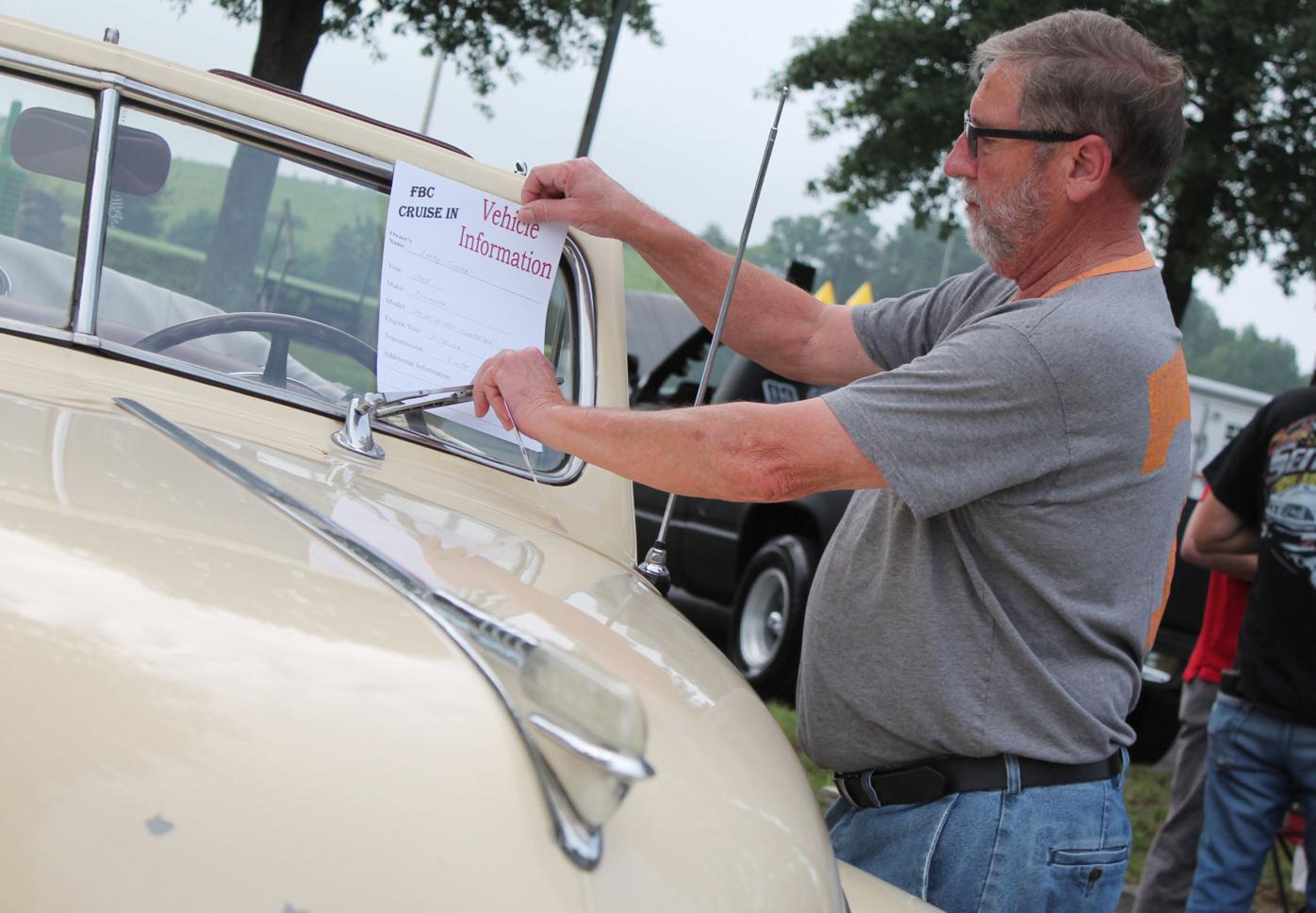 Larry Fowler places vehicle information on the windshield Saturday during the cruise-in at First Baptist Church in Lenoir City.

Steve Phillips gets his 1968 Chevrolet Corvair ready for the cruise-in Saturday at First Baptist Church in Lenoir City.

Larry Fowler places vehicle information on the windshield Saturday during the cruise-in at First Baptist Church in Lenoir City.

The rumble of engines could be heard Saturday as classic vehicles rolled their way into the First Baptist Church in Lenoir City parking lot for the 16th annual Cruise-In.

Visitors walked up and down the parking lot aisles, at times stopping to either take a photo of a car or speak with its owner. The cruise-in, which took place 9 a.m.-1 p.m., included classic cars, trucks, motorcycles and tractors, live music, door prizes and free food.

“I mean there’s a lot of powerful restored cars out there,” the Rev. Dick DeMerchant, senior adult and pastoral care pastor, said. “They come from everywhere, too. We’ve had people from New York, we’ve had people — I mean they don’t come from just around here. It’s unreal the distance some of these people come. I asked one guy that was here a couple years ago, he brought a Cadillac from New York, I said, ‘New York? How’d you find out about this?’ He had a relative that lived here that talked about it, so he came down here and stayed with them and came to the car show and brought his car.”

The event was the culmination of months of work. Typically the cruise-in is held the second Saturday in June, but DeMerchant said “heightened restrictions” from COVID-19 caused the delay.

“People gatherings and all that kind of stuff was very restrictive at that time, and now it’s more relaxed,” he said. “Even though it’s relaxed we’re trying to do our best to adhere to social distancing and also be protective of our people.”

There was discussion of canceling the event this year, but a swell in calls to the church resulted in the show going on.

“All the cars originally were set to be social distanced at 6 feet apart,” DeMerchant said. “The only time they could change that is if they came as a family with two cars, three cars, then they could move a cone and set beside each other.”

Keeping the cruise-in safe was “quite a bit” challenging, he said. Free face masks were available, and pre-made hot dog and hamburger meals were offered to visitors in the gymnasium.

For some, the car show was a continuation of a yearly tradition with family and friends.

“A lot of people just have a general interest in cars,” Mary Jane Klenske, cruise-in volunteer, said. “Whether they have one or not, they love them. They’re quite amazing to see, actually.”

DeMerchant said COVID-19 may have played a role in visitor attendance, but classic car owners showcasing their vehicles still came out strong.

Larry Fowler brought his 1948 Plymouth from Farragut for the second year.

“We’re a different breed. Everybody’s friendly,” he said. “If you’ve got any problems, everybody will help you out.”

While Saturday was a first at FBC for the two, both were no strangers to car shows. Scarlett hoped to get his son interested in cars.

“A love of cars and wanting to work on them, learning how to do stuff on them,” he said.