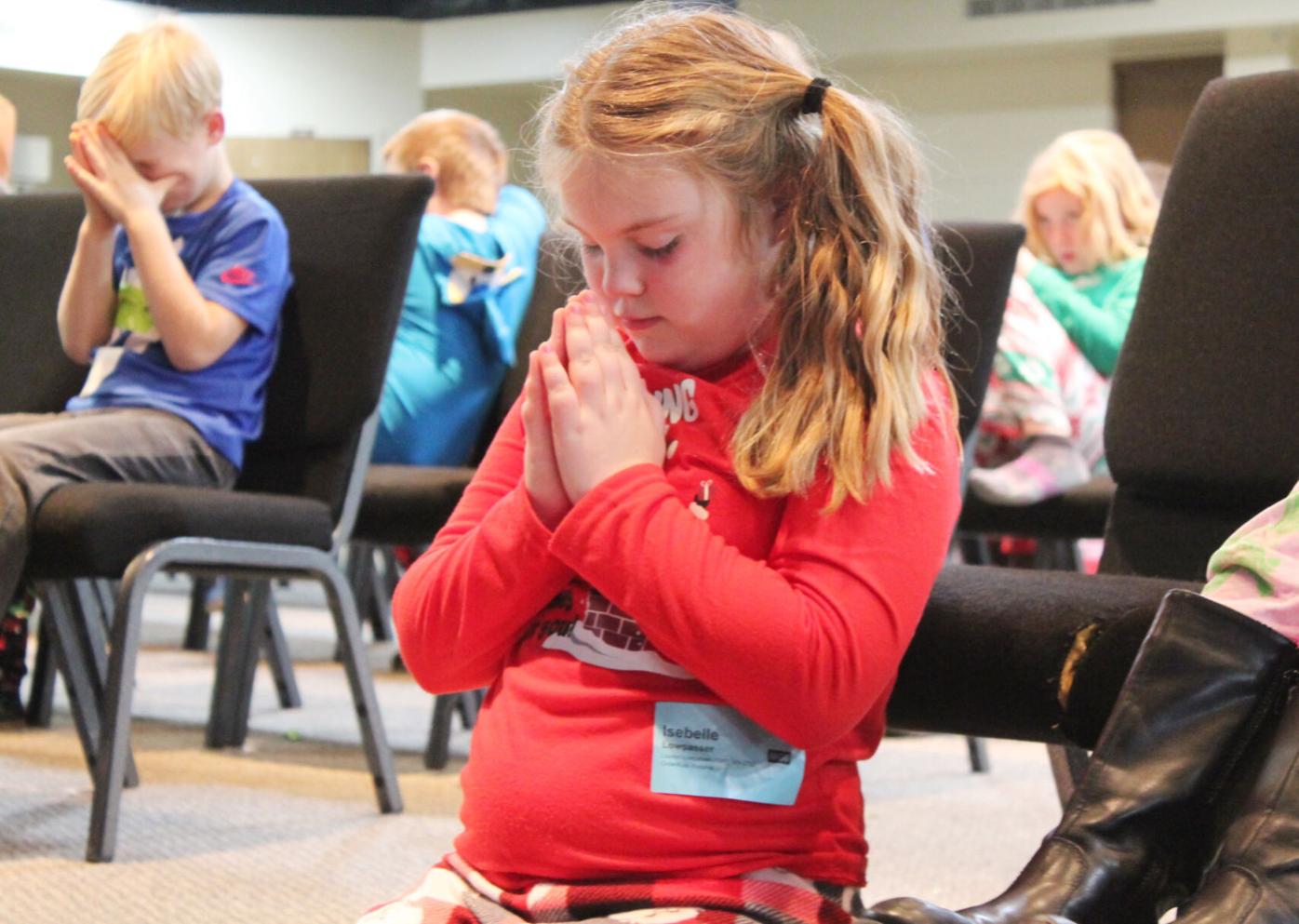 Isebelle Lowpasser prays with others during the Pancakes and Pajamas party at First Baptist Church in Lenoir City. 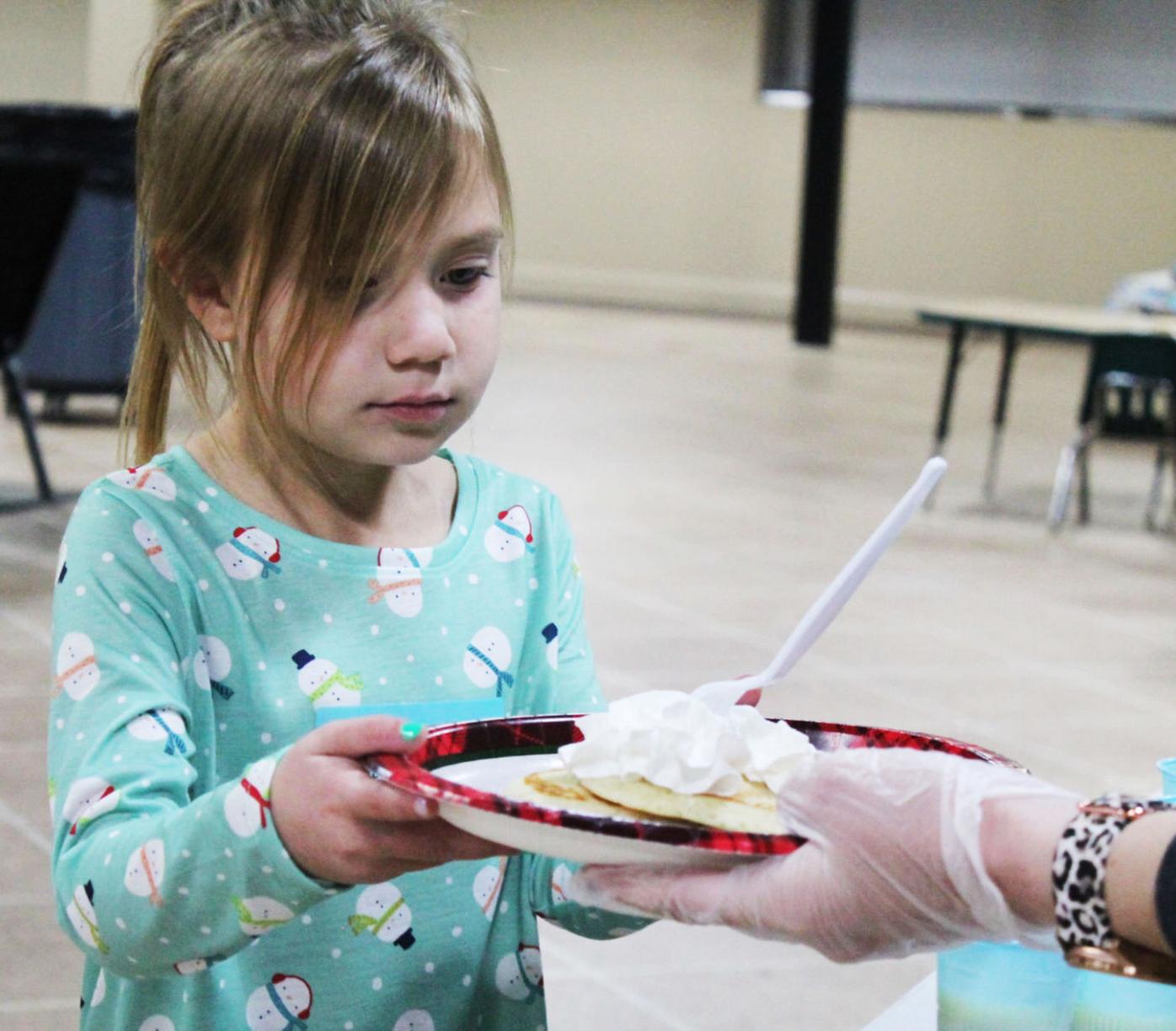 Rylee Abercrombie gets her plate of pancakes at First Baptist Church in Lenoir City.

Isebelle Lowpasser prays with others during the Pancakes and Pajamas party at First Baptist Church in Lenoir City.

Rylee Abercrombie gets her plate of pancakes at First Baptist Church in Lenoir City.

First Baptist Church in Lenoir City encouraged children to come decked out Dec. 15 in their favorite pajamas and learn the true meaning of Christmas.

Children up to fifth grade gathered in the KidStuf Theater for Pancakes and Panjamas.

The Rev. Chris Harding, FBC family pastor, admitted pancakes were chosen because they were easy to make.

“Just a fun Christmas party for our kids in the Christmas season,” Harding said. “... It’s just a fun theme for the kids. They tend to have pajama parties at school or at pre-school or whatever event they’re doing and so we’re just tying in something that they enjoy.”

Harding said about 40-50 children attended and after the meal split into groups based on age.

“It’s just more of a creative night,” Harding said. “There’s a game time in the gym where they’re going to do some activities and get some energy out. They’re making Christmas cookies. I mean we have the cookies ready but they’re going to decorate them with icing and there’s some Christmas crafts that they can do. We have a video but it’s not really the main purpose for tonight. We’ll also have time toward the end where we read the Christmas story together out of Luke chapter 2.”

“That’s always everything we do is to celebrate Jesus, to introduce the kids to who he is and teaching them the Bible and just doing it in an age-appropriate way,” he said. “Of course, we’re celebrating Christmas and just doing fun, engaging things that kids enjoy. We’re using that to communicate the good news.”

Natalie Mashburn, who led the night’s “elf games,” hoped children left with a greater understanding of the true meaning of Christmas.

“I think the whole goal of having something like this is to draw people in and then there is a special time set aside ... to deliver a brief message to the children and I hope that maybe we can try to reiterate that,” Mashburn said. “Even when they come to play the games, I’m going to still try to have a short moment of why we’re really here, what Christmas is really about, that kind of thing.”

Although most of the children present likely attend FBC, Mashburn said anyone was welcome.

“I think that’s what all church programs should be about,” Mashburn said. “The fun is to just try to draw them in.”

Jylian Abercrombie brought her two children, Maddox and Rylee, after a recommendation from Mashburn. Like others, she wanted her children to remember the meaning of the holiday.

“Just make some memories with friends,” Abercrombie said. “We know a lot of people who go to church here.”