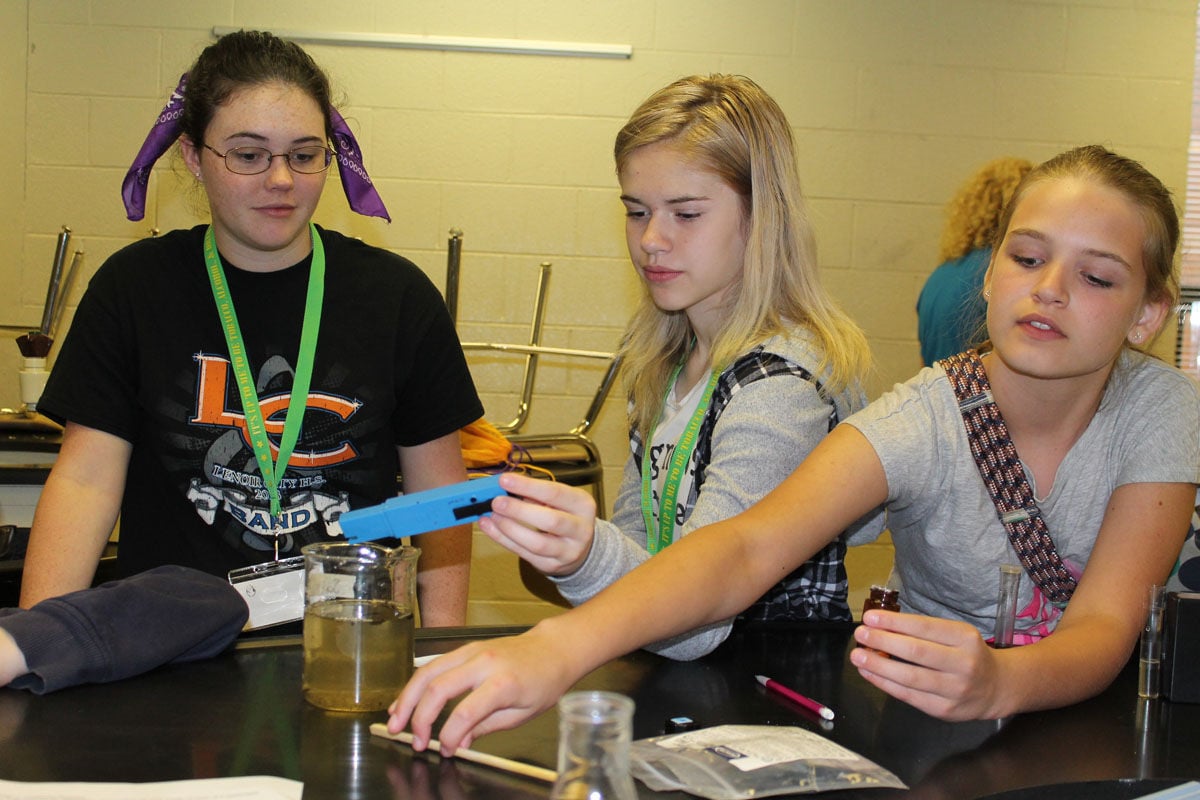 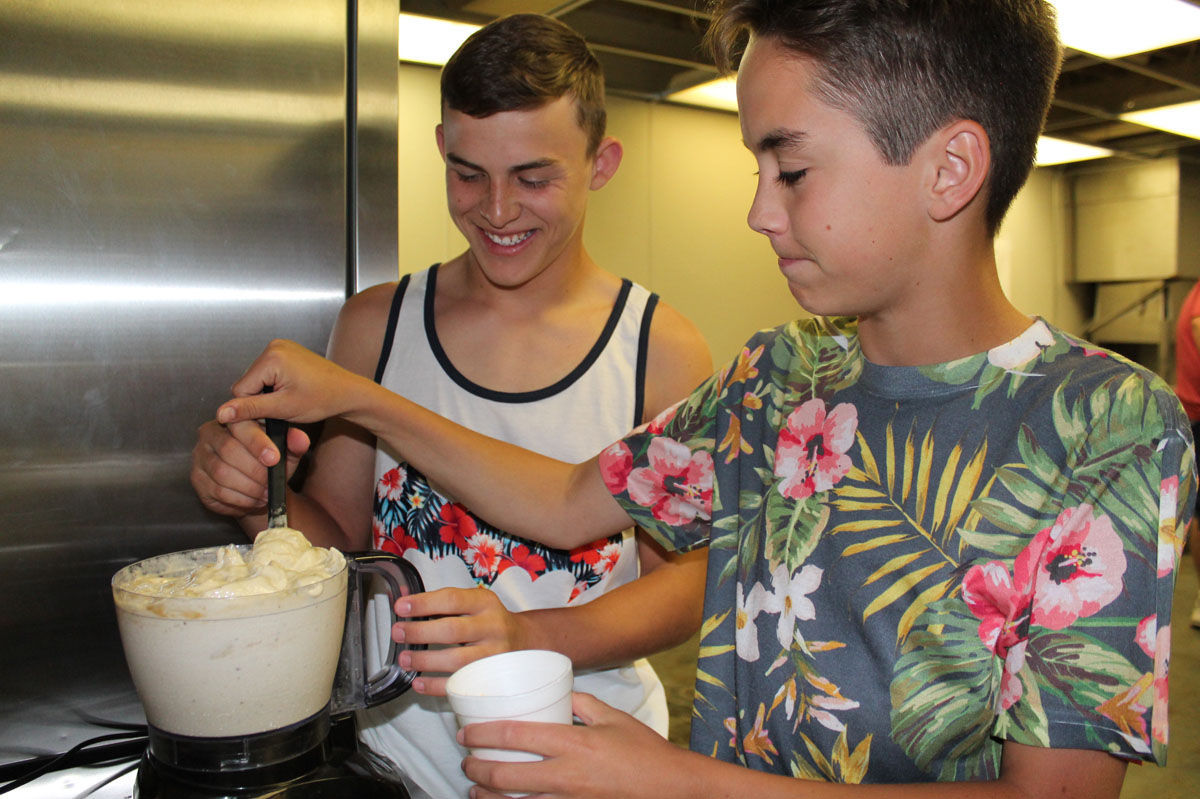 Children could be heard singing along to a skit conducted by counselors Thursday morning inside the Lenoir City Intermediate/Middle School cafeteria as part of the PLAYLoudon’s Energy Quest camp geared toward fourth- through sixth-grade students.

An introductory skit on “Hermie the Frog” was designed to get the students energized through a series of motions and sing-alongs, Heather Carter, science, technology, engineering and math instructor, said.

The middle school camp was one of three in Lenoir City, and other two are taking place at the elementary and high schools. Six Energy Quest camps were held across the county May 23-27.

“One of the things in camp we do is we try to see that there’s lots of different ways to get exercise,” Carter said. “It doesn’t necessarily mean running a mile or doing 50 jumping jacks. There’s nothing wrong with that, but we get our physical activities through — we did some karate, we did golf. We do these energizers. We did some fun games like a sponge relay, wet sponge relay, going swimming, and so just letting them see that exercise can be done in a lot of different ways because we want to encourage them to be outdoors and to play and exercise and also eat right.”

Throughout the week, students were given two lessons per day, with one taking place in the morning and the other in the afternoon. This year students in Carter’s class placed a focus on engineering by participating in activities related to a makeshift story of “Jack and the Beanstalk.” In one activity, children made a tall beanstalk using 25 green pipe cleaners.

“The kids got to see as it got taller it wouldn’t stand. It would fall over, so then they had to make modifications to it and improve it which was all — I kept reinforcing that that’s part of the engineering process,” Carter said. “The word ‘fail’ is not a bad word in this room at all.”

Another activity focused on making a miniature table using only cardboard, construction paper and masking tape. The table was tested by placing textbooks on top before it collapsed. One table held 40 textbooks, she said.

Failing at least once was necessary in the Quest camp in order for students to understand the engineering process, Carter said.

“I want you to make mistakes because that’s how real engineers work,” Carter said. “I want you to see what doesn’t work and then make changes and modifications to your prototype, retest it and then just keep retesting it until you get your best results.”

Children also watched as counselors performed a skit on the effects of tobacco.

At the high school, seventh- to ninth-graders in culinary arts teacher Amanda Parks’ class learned how to make ice cream out of bananas.

By freezing the bananas and then blending them, the consistency was equivalent to that of ice cream, Parks said. Hopes were that students would be able to learn how to make their own food, while also eating healthier and cutting calories, she said.

“They’re going to need to eat for the rest of their lives, so regardless of whether or not they go into the industry these kids always leave my class with at least a skill of being able to take care of themselves,” Parks said.

At another station students were learning how to create a water filter to clean dirty water and then measure the water quality. The activity was part of an outreach program with Kim Carter and others from the University of Tennessee civil and environmental engineering department.

Matzek said this week was the first time UT had participated in the Quest camps at both the Loudon and Lenoir City locations.

“Just to get them more exposure to STEM areas and to that whole process of problem-solving and teamwork, communication, just kind of thinking outside of the box, just really getting them to think to solve problems,” Melanie Harris, STEM Quest coordinator and LCHS assistant principal, said. “Of course, also, another added benefit is they get to see things that are going on at the high school.

“So it helps that transition from middle school to high school, and it helps them know what programs we offer and kind of sparks their interests in things that’s going on in the high school,” she added.

First- to third-graders participated in Adventure Quest activities at the elementary school. It was the second year both locations had three camps.

Attendance for this summer’s camps totaled about 225, which is more than what was initially planned, Quest camp coordinator Mary Harding said.

“We had planned about 110 campers per side of the county,” she said.

Now that another year has gone by, Harding said officials may look into expanding outreach into the Greenback community.

“They’re pretty isolated from the rest of the county, but the transportation is a little bit more difficult,” Harding said. “As long as we can — we’re going to have to increase our funding sources for that to happen because that’ll be a third site, additional staff and that kind of stuff.”

Officials haven’t decided what type of Quest camp would make its way toward the other end of the county, Harding said.

“We’ll take like some of our data because we survey everybody, the parents, the kids, counselors and we’ll get like where our biggest enrollments were,” she said. “Probably our Energy Quest has the largest group of kids. We probably have about 110 kids between those two camps and if that’s where we see the most — like that’s the highest, if we have to turn people away, who do we turn away at what grade level, and that might be where we start at Greenback.”