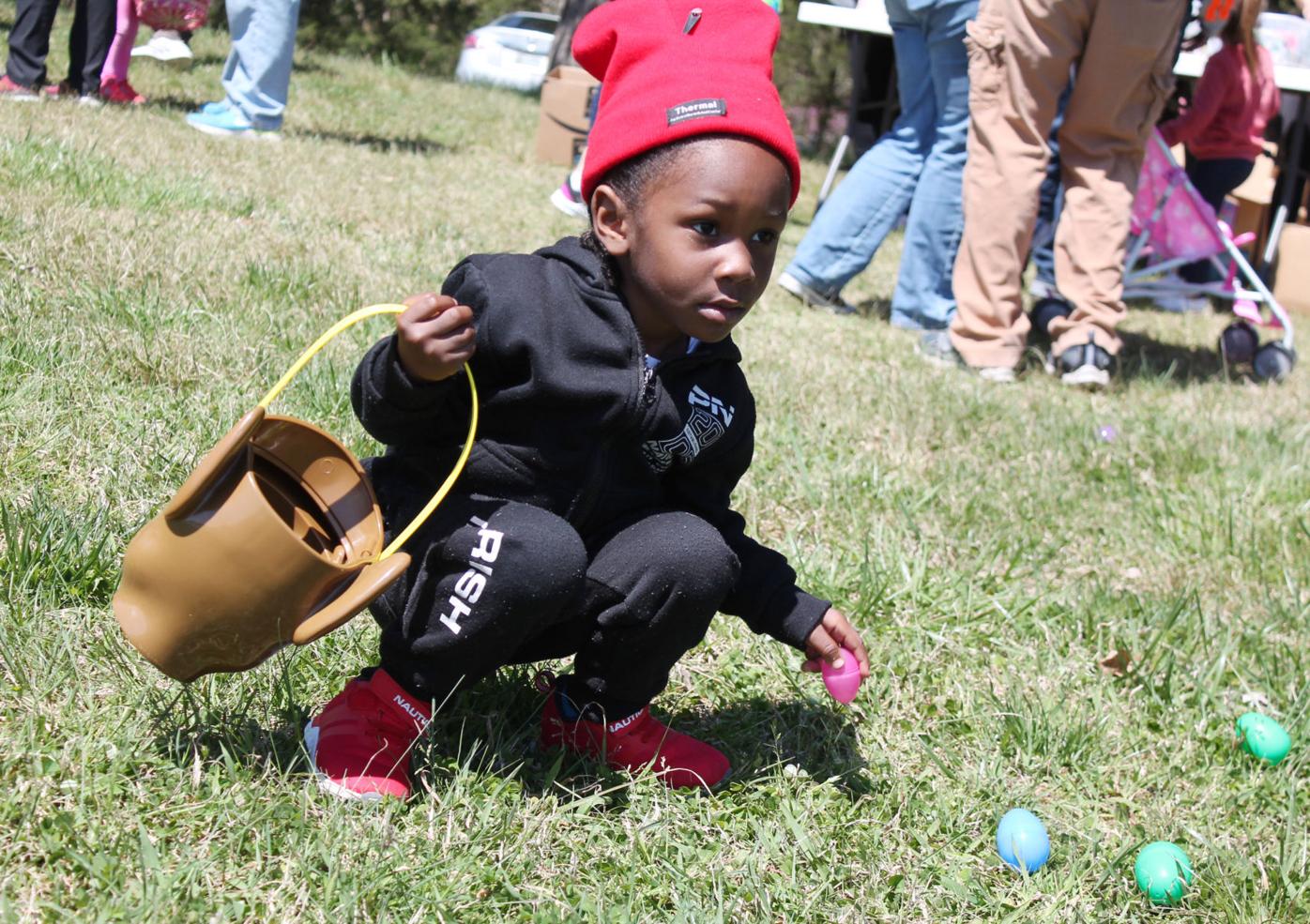 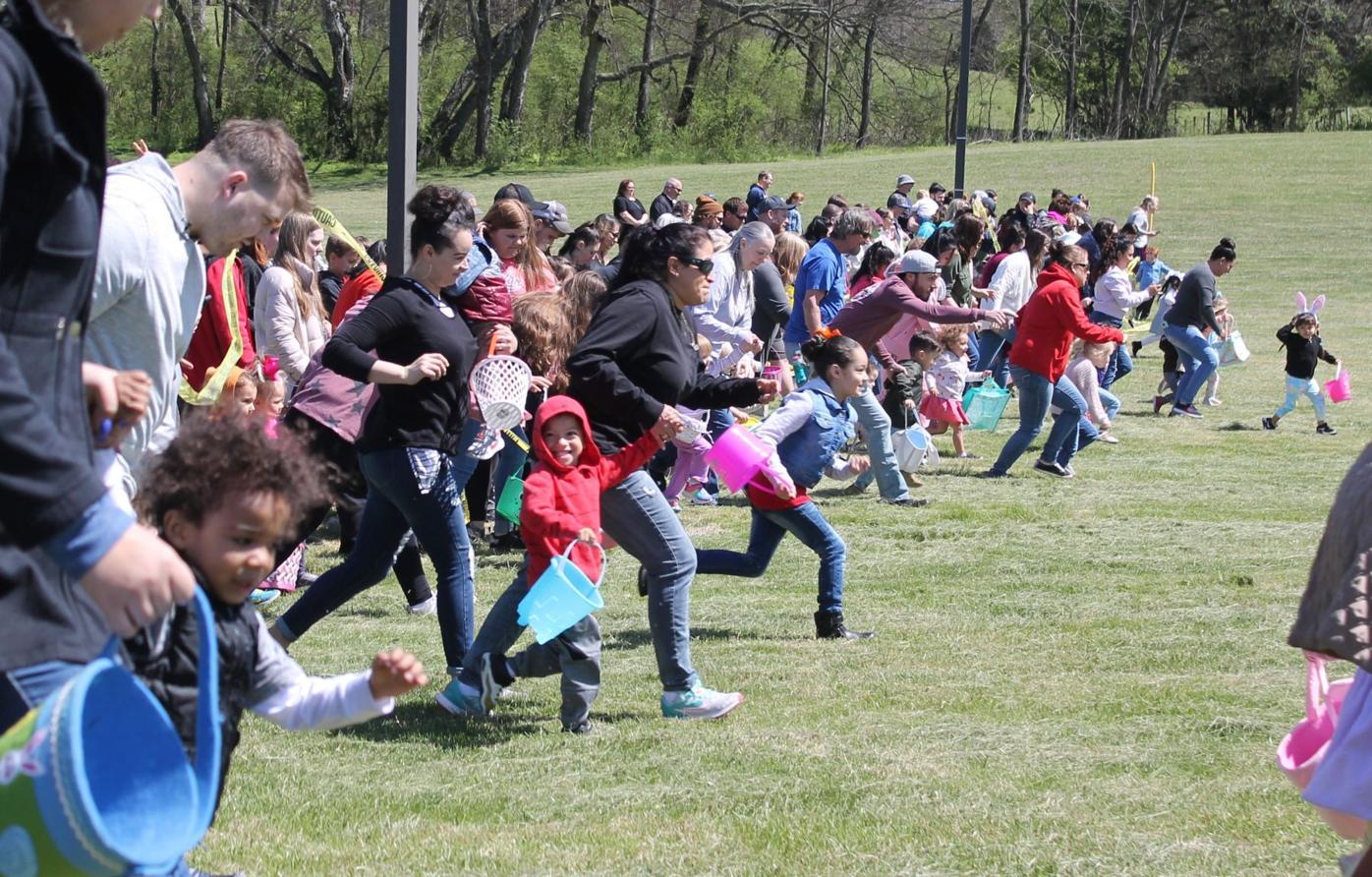 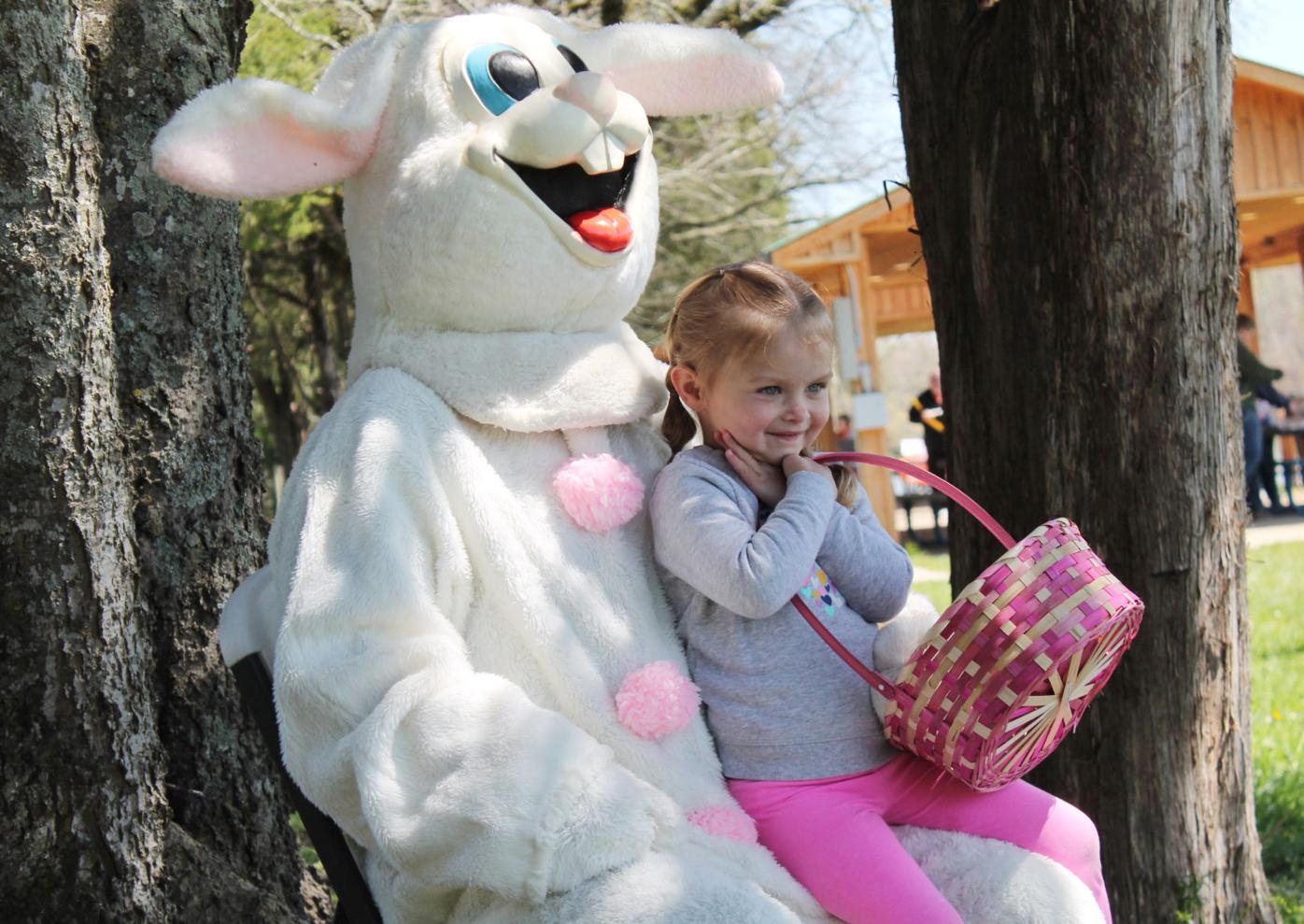 Zayne Land is all smiles Saturday with the Easter bunny at Lenoir City Park. 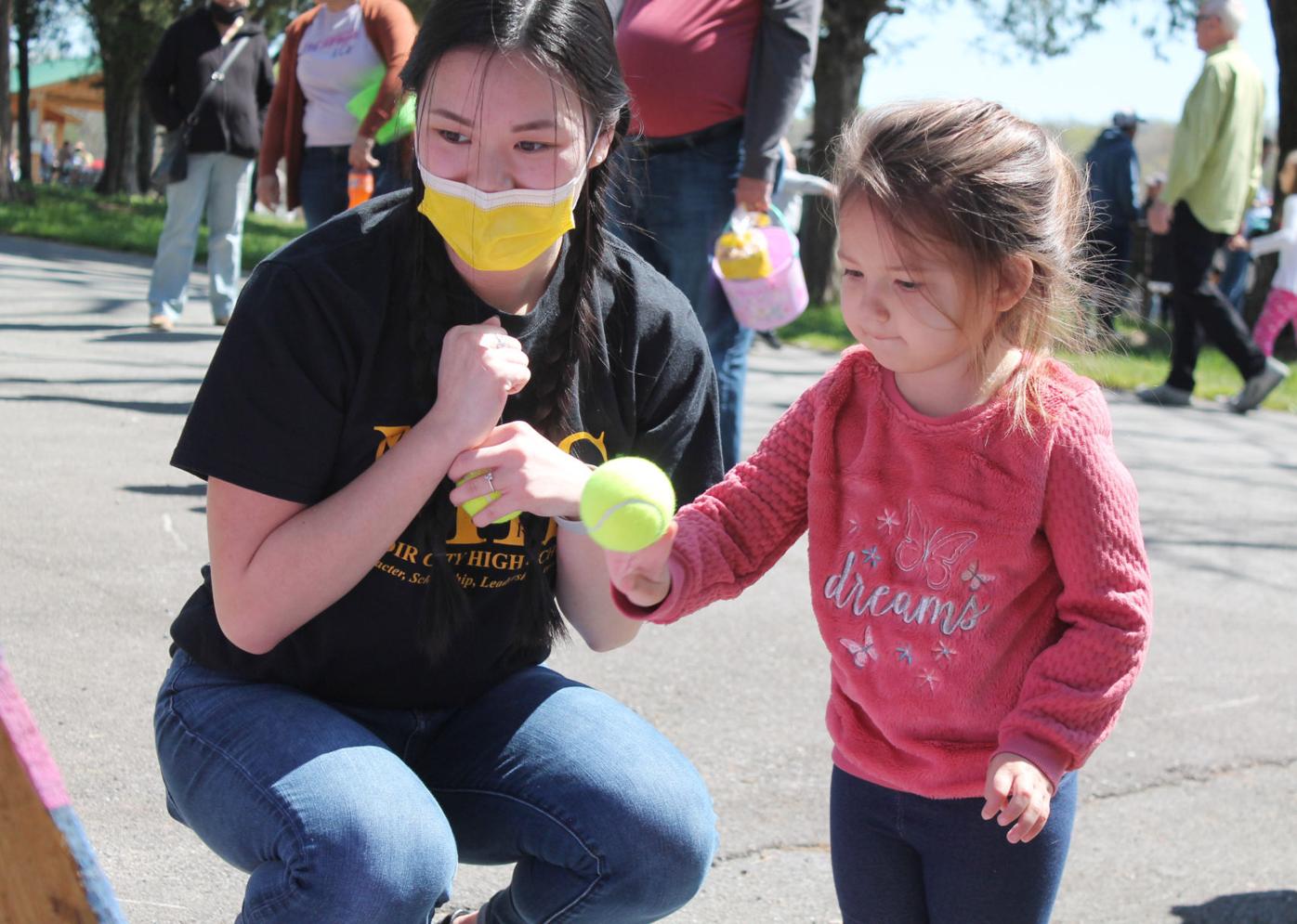 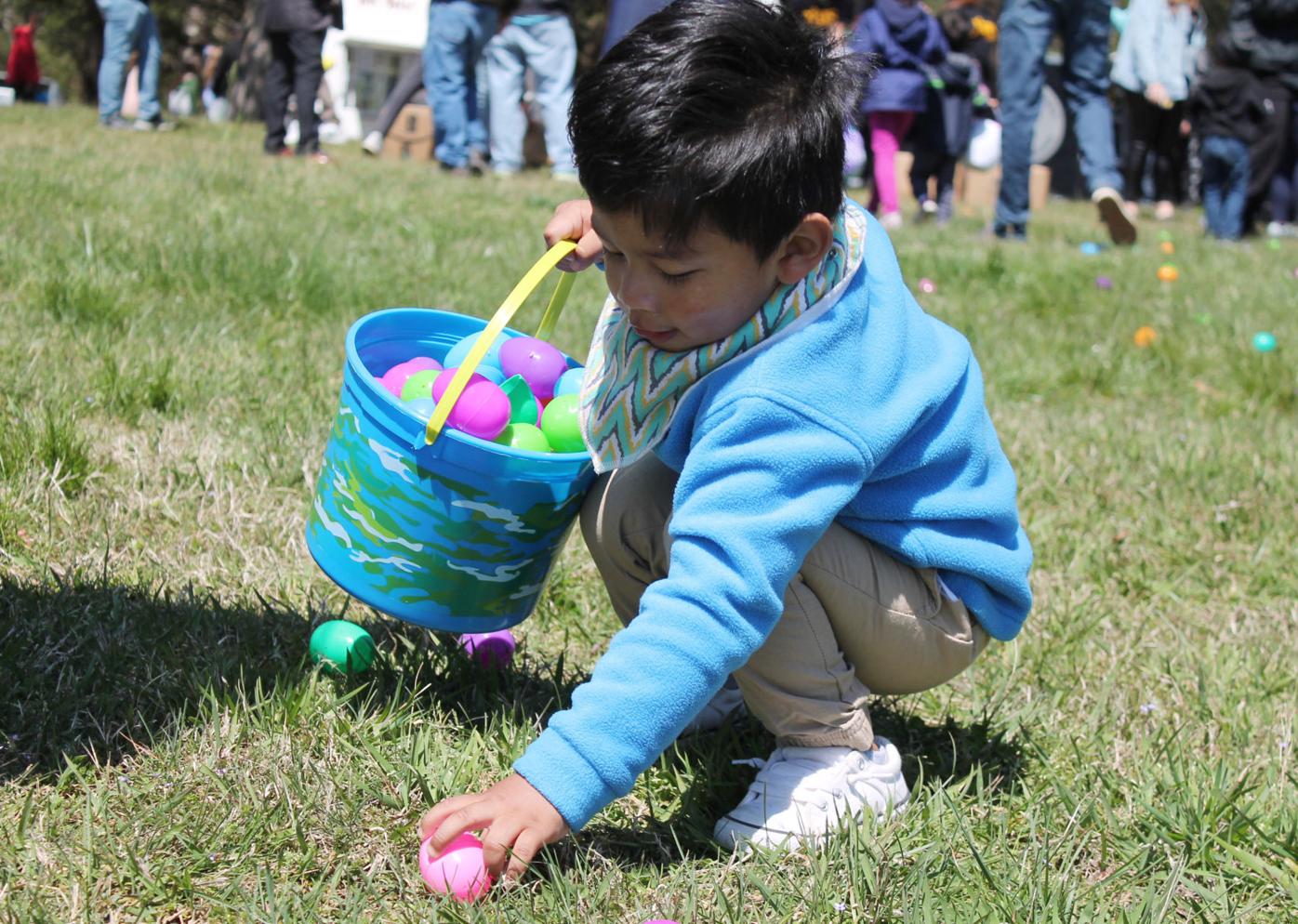 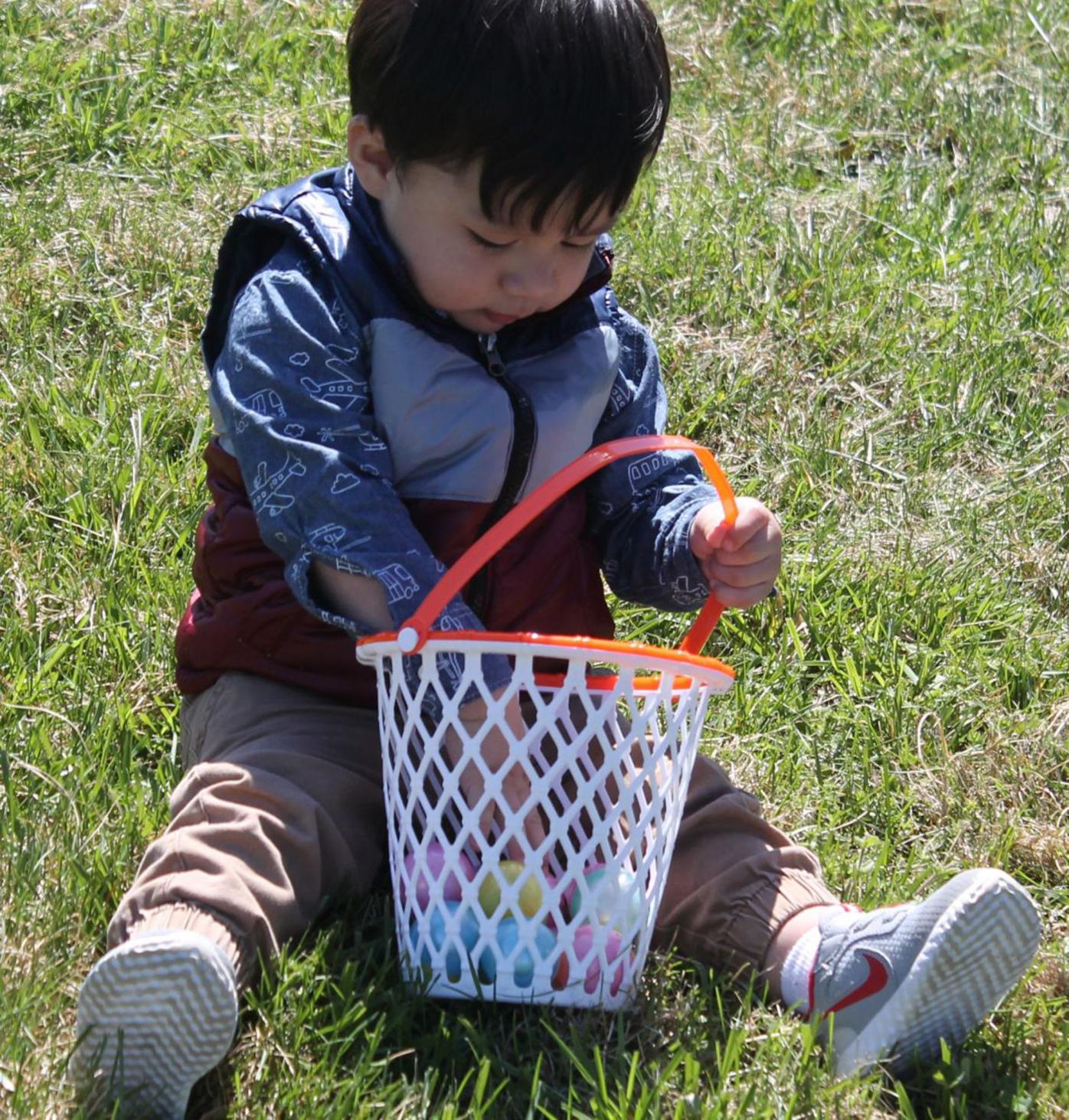 Auriel Lara checks out the eggs he found Saturday in the Loudon Egg Hunt. 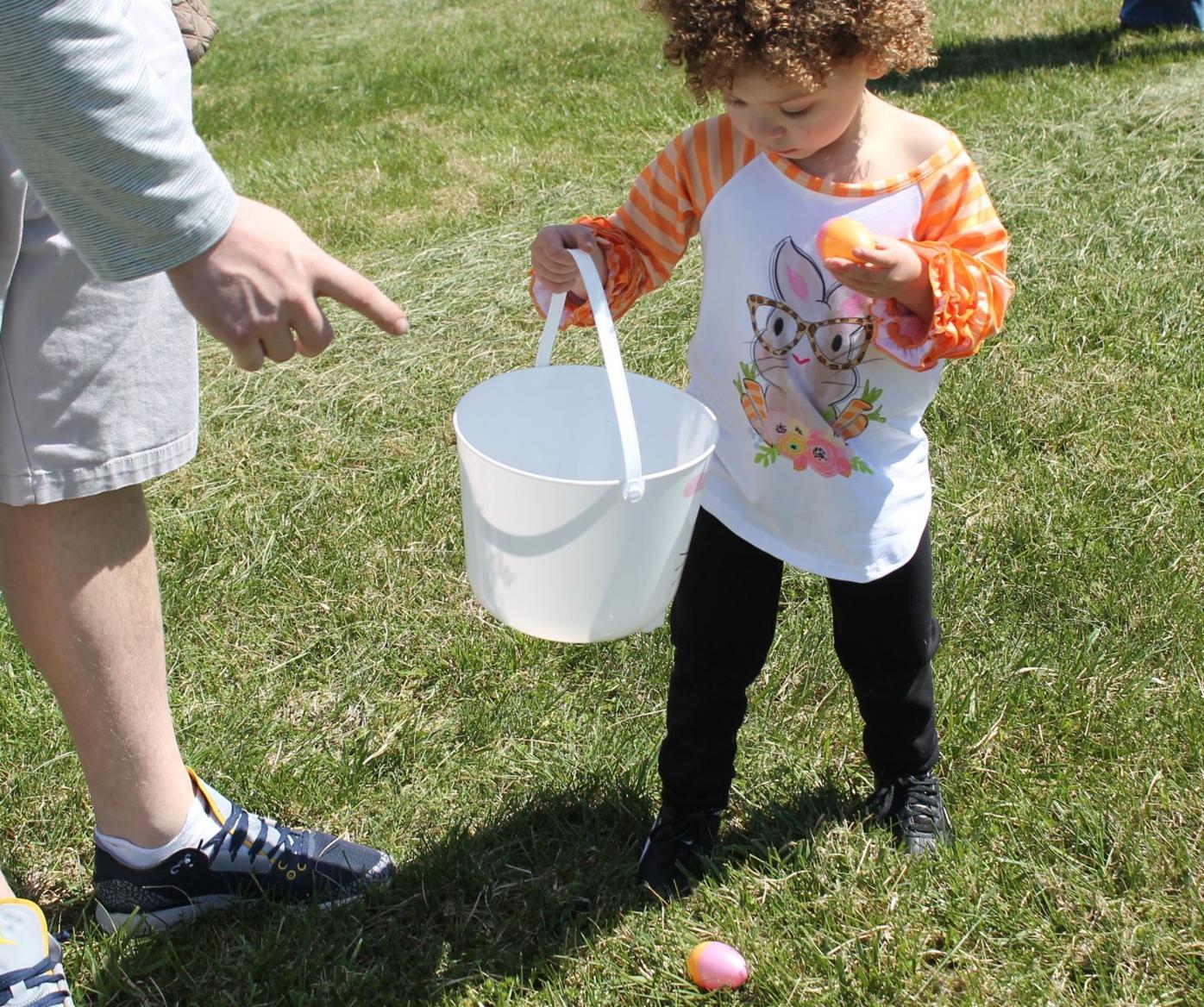 Naveena Simmons places an egg in her basket Saturday at the Loudon Egg Hunt. 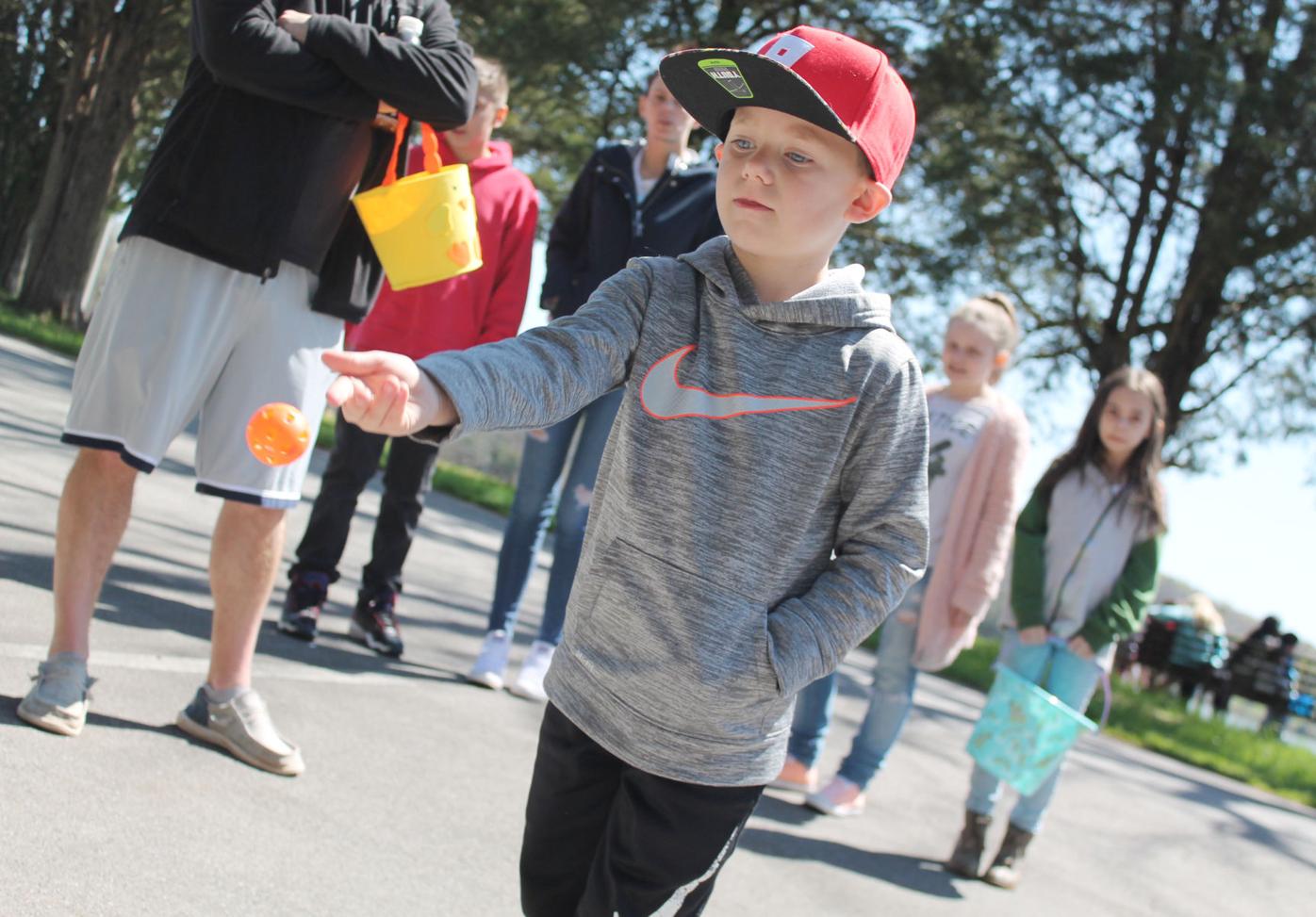 Zayne Land is all smiles Saturday with the Easter bunny at Lenoir City Park.

Auriel Lara checks out the eggs he found Saturday in the Loudon Egg Hunt.

Naveena Simmons places an egg in her basket Saturday at the Loudon Egg Hunt.

“For 0-3, if you have kids or at least through my experience with kids, the 0-3 age group you need a lot of time and a lot of patience and so that’s why we tried to spread their egg hunt over an hour length,” Zack Cusick, Lenoir City program coordinator, said. “That way the kids can run at their leisure, we’re not firing a horn and having them try to run and have them grab the eggs. Years ago when we switched over to the way we do our egg hunt this year for those kids, you would sometimes have parents kind of dragging their 1 year old and kind of scooping their eggs, so we want to get away from that and let the kids truly enjoy it and take their time to be able to have fun.”

Prize eggs were offered for ages 4-7 and 8-12. Younger children could receive an Easter basket, while Walmart gift cards were offered to the older group.

Cusick didn’t know what to expect during the pandemic, but he said Saturday was a success.

“That’s what I kind of want to hopefully provide is now that we’re trying to get closer back to normal, or to the new normal, that we can start this event again,” Cusick said. “This was our first event we had to shut down because of COVID last year. This is our opportunity to kind of get back to normal and get people out and about. We’ve had pretty good weather for this event so that always helps getting the crowds out of the houses.”

Cusick initially was unsure if activities would be available, but he ultimately decided to move forward.

“As we saw the trend of cases going down in Loudon County, we wanted to still be safe but still be able to have the event like we have in the past,” he said. “Once the trend of cases started going down, we felt safe enough that we could continue as normal with people can still kind of go about the Easter egg hunt as best as they can. If they’re comfortable with it, they can jump in full throttle. If they’re a little hesitant, they can kind of take their own precautions while they’re going through the hunt.”

Angela and Michael Garces and their children, Isa and Imani, recently moved to Lenoir City from Maryville. Angela learned of the hunt through social media.

“It’s community unity for what today stands for as well,” she said. “They just get to come out here and have fun. They enjoy finding the eggs and the prizes and running around.”

Laura Goodman brought her two grandchildren, Giovanni and Emily Vega. She wanted the little ones to “get some sunshine and interact with other kids,” something she said was difficult during the pandemic.

“I think it’s very good for the community,” Goodman said. “It gets people out and visiting and see what the city can do, we do care about the kids. I substitute teach at the elementary school now, but I think it’s a good idea for the kids to get out and see what the city has, because a lot of people don’t think about the park. They don’t even know the park’s here unless they’re from here.”

The Loudon hunt was split into three age categories with ages 0-3 at 12:30 p.m., 4-7 at 2 p.m. and 8-12 at 3:30 p.m. Children could get pictures with the Easter bunny and check out a Loudon Fire Department fire truck. Tennessee Highway Patrol also made an appearance in a helicopter, which children could visit after the hunt.

The hunt was originally scheduled for March 27.

“We decided to split it up because there’s still COVID concerns, and we wanted to make sure we’re as safe as we can be,” Ramey Lyle, Loudon Parks and Recreation program coordinator, said. “... If we did it all at once like we normally do, there would be four times the number that’s here. We just wanted to go ahead and break it up in different times that way it separates the amount of people being all together at once.”

Lyle said canceling the hunt was discussed at the beginning of the year.

“We were kind of hesitant at first, but we’ve had so many people comment saying they’d love to have it,” he said. “And I think with the vaccinations and everything, schools are going full-fledged and youth programs and football programs, baseball programs, soccer. They all seem to be going fine, so we decided to go ahead and do it because people really love it and look forward to it every year.”

Some eggs contained tickets for special prizes children could collect at the end of the hunt. Walmart donated $75, which the department matched, Lyle said. Knoxville TVA Employees Credit Union also donated toys and other gifts. Children could choose from items such as basketballs, footballs and pool floats.

Vickie Harness attended with a child in each age group. She was thrilled to be back at the hunt after last year was canceled. The sense of normalcy is important for kids in the community, she said.

“It’s amazing,” Harness said. “We need to get back to this for sure. I’m ready to getw life back to some sort of normalcy, so it’s awesome. And it’s a free event, and it’s amazing every year.”

Telisha Odell agreed. She appreciated how the age groups were split.

“We’re just really glad to be able to have something for the kids to do,” Odell said. “We tried to do something like this at home last year but in a smaller scale. It’s just not as fun. We’re glad that they’re doing it. We noticed that they split the age groups up so not everybody’s here at the same time, so that makes us feel a lot safer, too.”