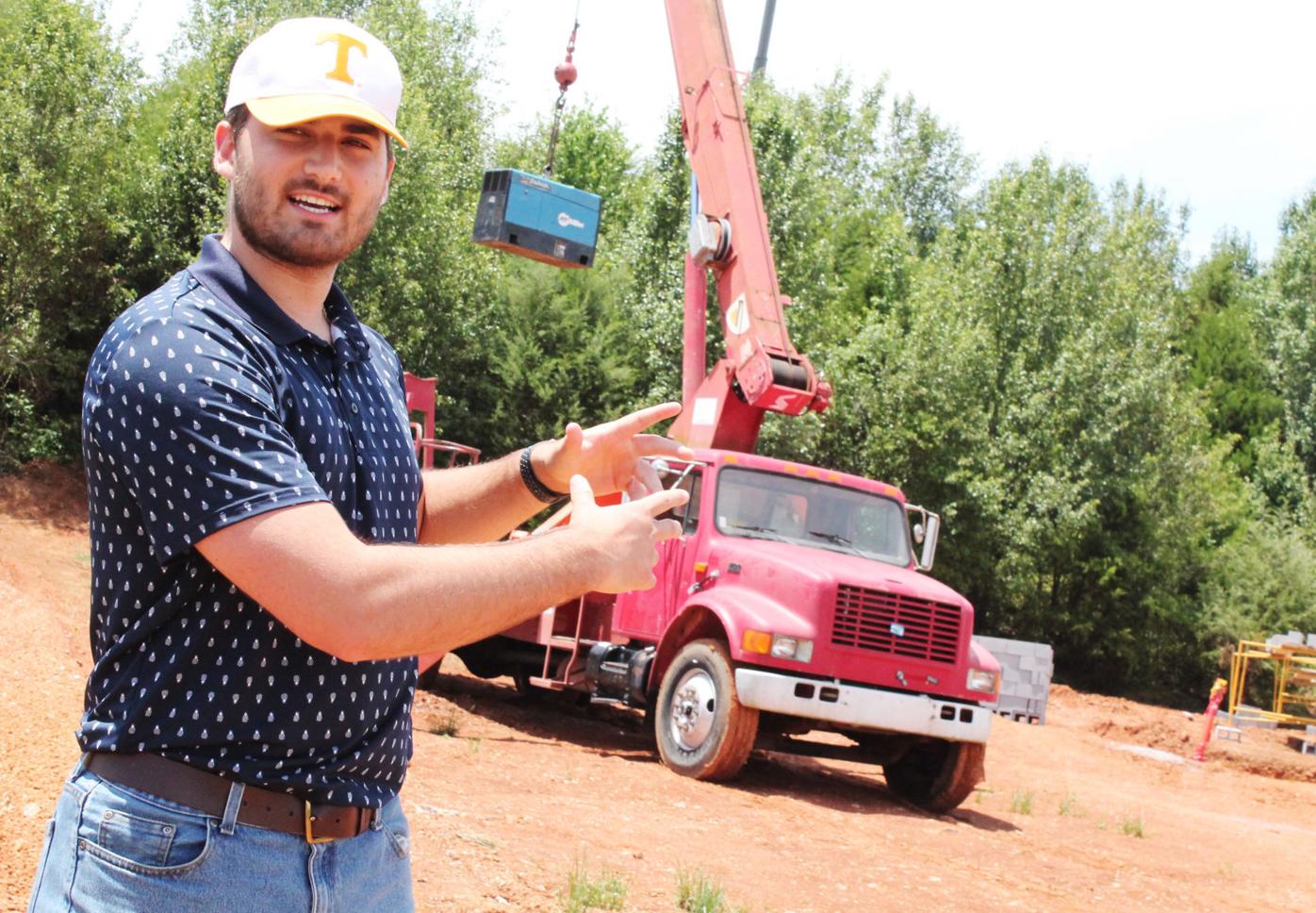 Jacob Nelson, LoCo Drive-In operator, explains where the movie theater’s screen will be placed on the Centre 75 Business Park property off Highway 72 in Loudon. 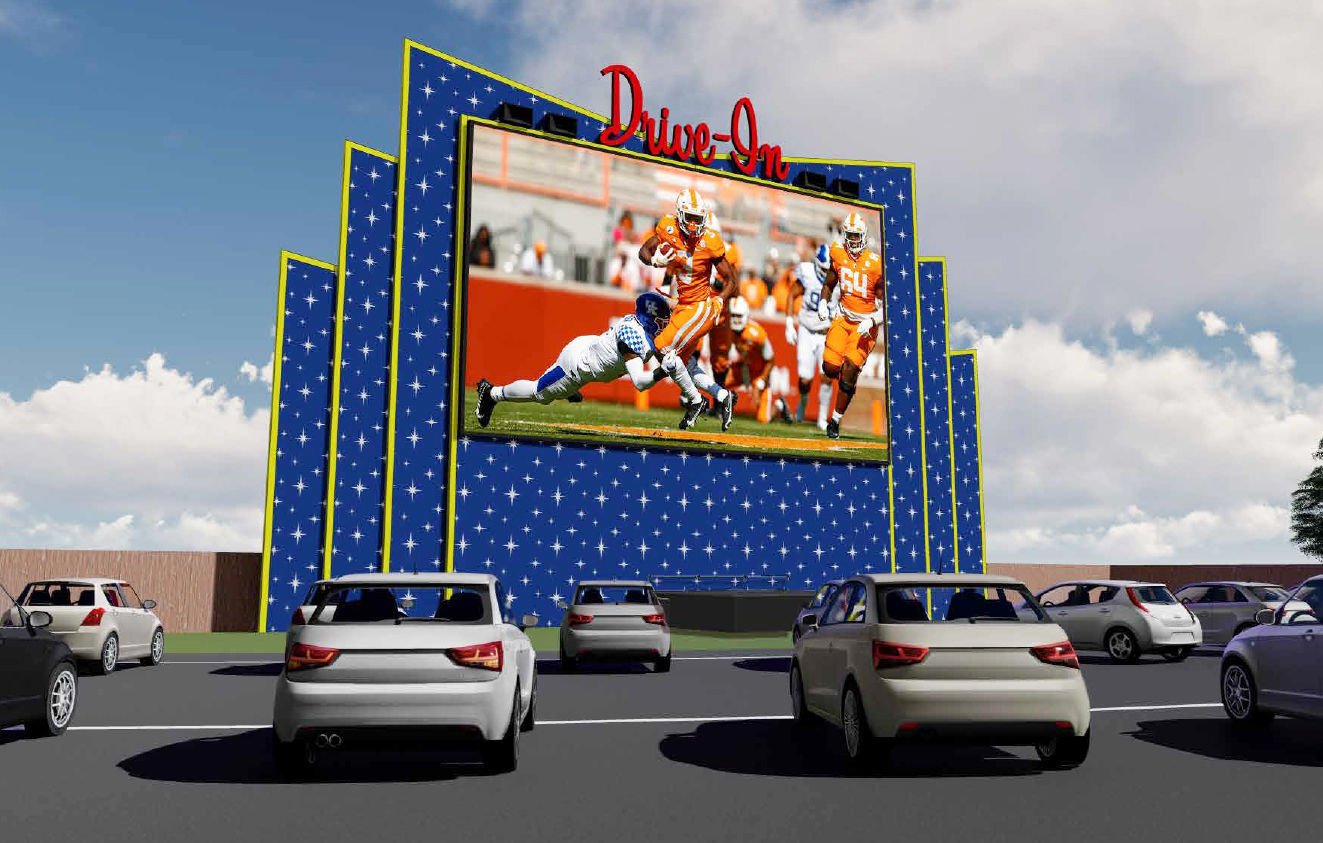 A rendering provided by LoCo Drive-In operator Jacob Nelson showing what the LoCo Tron should look like.

Jacob Nelson, LoCo Drive-In operator, explains where the movie theater’s screen will be placed on the Centre 75 Business Park property off Highway 72 in Loudon.

A rendering provided by LoCo Drive-In operator Jacob Nelson showing what the LoCo Tron should look like.

Plans for the theater started in November with Gordon and Susie Whitener of The Whitener Company. Now, through Loudon Entertainment LLC, the project is set to open July 4 weekend if no complications arise.

“Honestly, the only thing left done is for the video board to be finished,” Gordon said. “The foundation and everything’s already in. It’s just putting up the steel, putting up the screen and finishing a little bit of groundwork and putting a fence around it.”

Crews have been working on the property since Loudon County Commission and Loudon City Council approved a lease agreement earlier this year, which was for five years at $200 per month for the 10.31 acres behind Goodfellas Wine and Spirits off Highway 72.

Loudon Entertainment has an option to purchase the property for $40,000 per acre. The lease automatically renews after five years unless terminated, and the developer has first right of refusal.

Gordon said while the property will be used for movies old and new, he hopes bigger events can be planned for the property that can hold up to 400 vehicles.

“Obviously, it’s going to be a Thursday through Sunday drive-in, but we plan on kind of special events there, including concerts,” he said. “We plan on showing football in the fall there.”

According to the LoCo Drive-In website, plans include presenting movies, sporting events and concerts. The idea is to appeal to all ages and demographics.

The 35-foot by 63-foot Samsung LED video board — called LoCo Tron — can be used any time of the day, which Gordon believes could set it apart from other drive-in theaters.

“We found so far that it’s pretty unique anywhere,” he said. “There aren’t many or any that we know of full video boards that are used for a full-time, year-round drive-in.”

The drive-in will have concessions, restrooms and a space for local food trucks, which LoCo Drive-In operator Jacob Nelson said will be rotated nightly. There will even be a playground for children.

Nelson said the goal is for the property to have a family friendly environment.

“If we’re having a Sunday matinee where we’re showing an animated or a kids movie, we want to really encourage families to come out and be able to — if the kid doesn’t want to stay in the car, maybe they want to watch a movie and they don’t want to be in a crowded movie theater and be quiet, sit here like this, just let them go have fun and play on the playground,” Nelson said. “It’ll be really nice and new and state of the art.”

A drive-in movie theater has been Gordon’s dream for years. Timing was critical.

“For me it’s more of a nostalgia-type project that I’ve had on my mind for 25 years or so, but I certainly was motivated by COVID ... and the fact that we have video board technology in our company’s history back in the 2005 through 2008 years,” Gordon said. “All of it just kind of came together and it felt like the right time to do it. ... I think the location is great with the I-40 (and) I-75 intersection and the fact that we can kind of draw anywhere from Chattanooga up to north of Knoxville and of course east and west of there as well.”