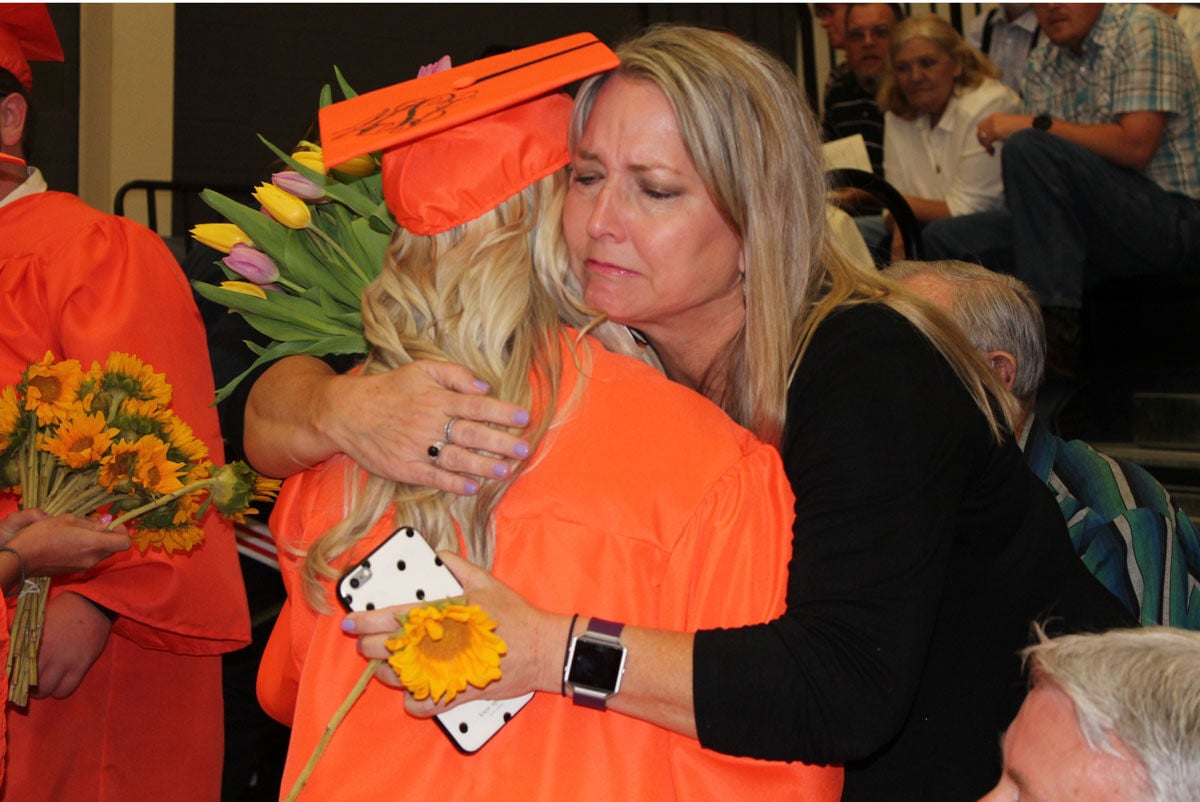 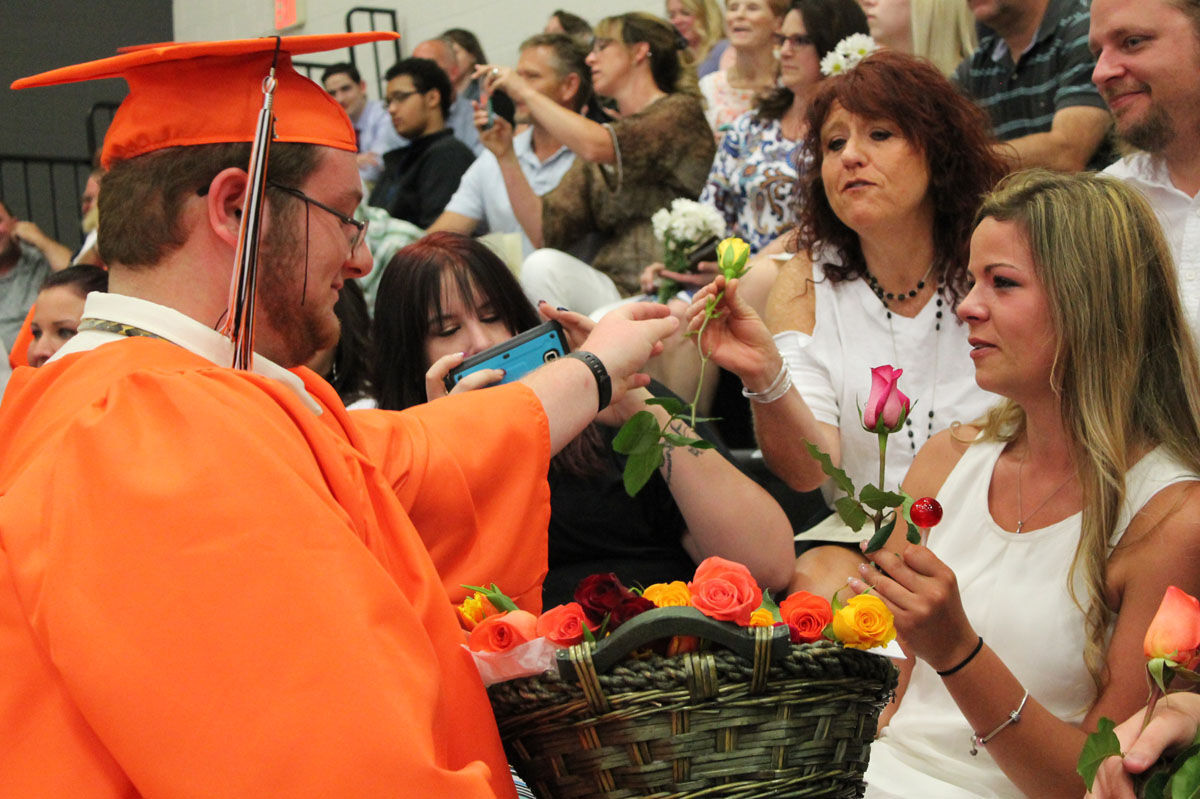 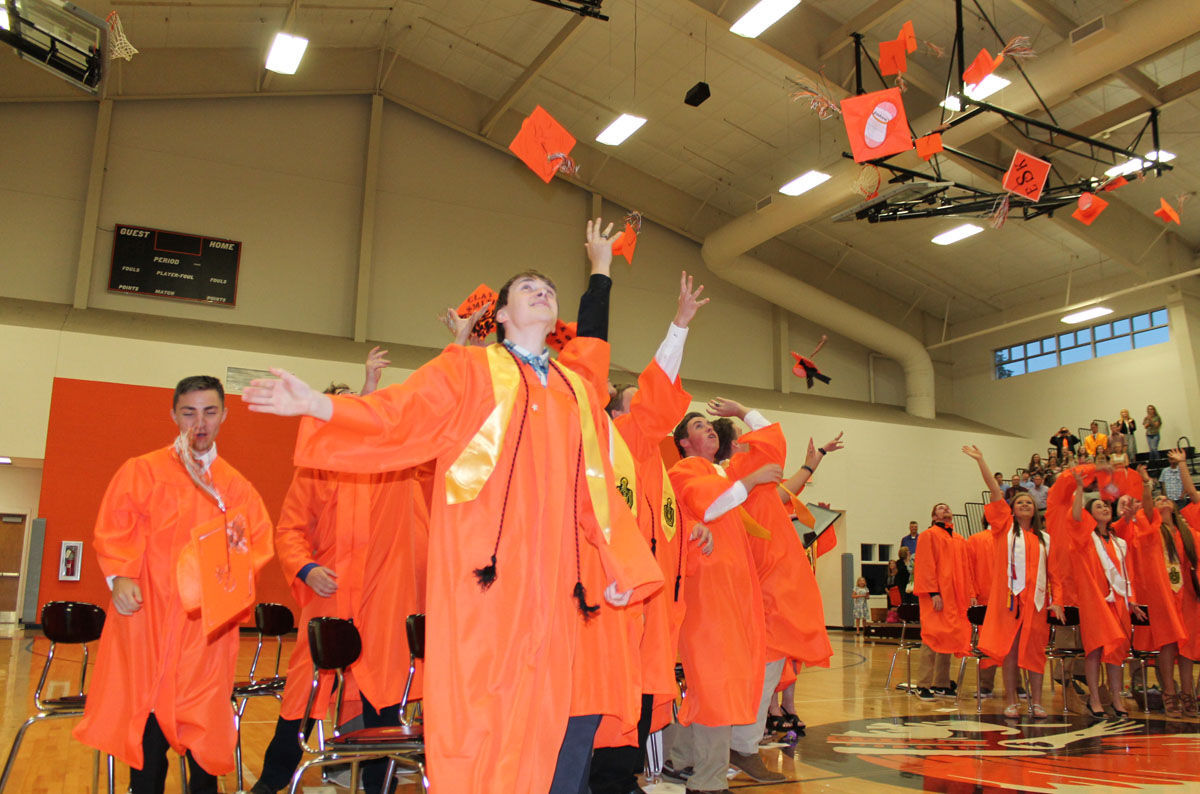 Students toss their hats in celebration of graduating Friday at Greenback School. 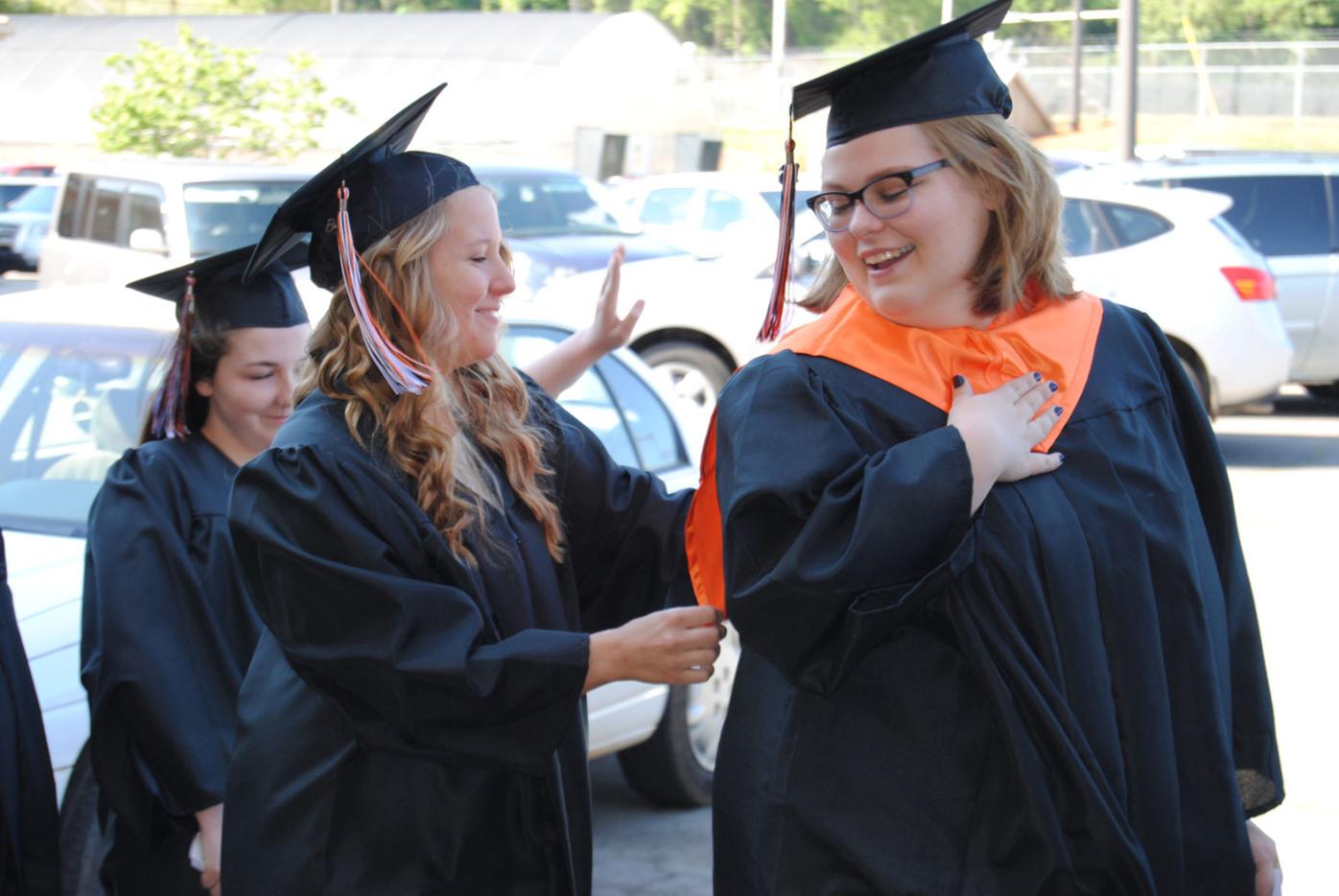 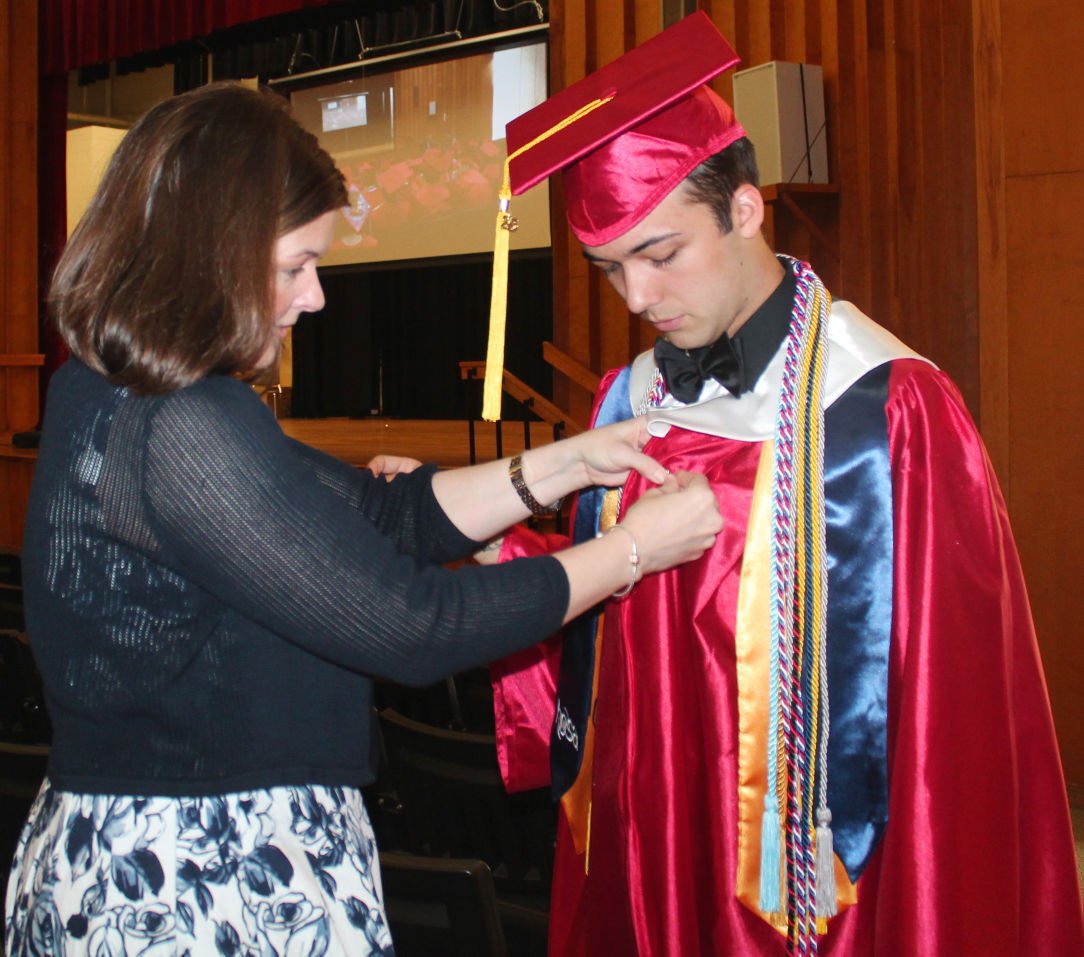 Students toss their hats in celebration of graduating Friday at Greenback School.

The journey to receive their diplomas was no doubt a long and arduous road, but graduates who took part in ceremonies last weekend at Lenoir City, Loudon and Greenback high schools say being recognized for their efforts was worth the wait.

A touch of anxiety was in the air Saturday at Lenoir City High School as seniors prepared for their final march into the gymnasium to begin the 2016 graduation ceremony.

“I think we’ve looked forward to it for so long that we’re not really nervous, but we are very excited,” Madison Moats said.

Students laughed and conversed as they waited for the ceremony to begin.

Moats said she was pleased to share this time with her classmates and looked forward to graduating in front of her family members who were waiting inside.

When they entered the doors of the gym the gravity of the moment might hit her, she said.

“I don’t think any of us have necessarily realized the full spectrum of emotions, and I don’t think it will hit us until we go through the doors, but I’m very excited,” Moats said. “I know we’ve looked forward to it for so long.”

The day was exciting and bittersweet, Reed said.

“Yesterday we had a practice, and when I was sitting there looking around it was hard to believe it was one of the last times we were all going to be in the same room at the same time,” she said.

Graduation has been a long time coming, Moats said. Her senior year at LCHS felt more like preparation for the future than the other years of high school.

“I think it’s just going to be exciting,” Reed said about the conclusion of her high school career. “We’ve been waiting so long for this to happen. It seems like it has gone so slow, but at the same time it’s hard to believe we’re already graduating.

“... We’ve all worked very hard, and I know I’ve worked really hard to get to where we are,” Reed added. “It’s good to be recognized for that.”

Graduates from Loudon High School gathered one last time in the auditorium Saturday before accepting their diplomas.

“Adulthood is kicking in,” Hollie Kizziah said. “We’ll be moving out and being separated from our parents.”

Hannah Ingram said she and her classmates are taking their next step by “walking into the real world.”

“It’s just another step for me,” Jacob Collier said Saturday. “It opens a lot of possibilities and doors for me.”

Emily Grimes said she will be attending Pellissippi State Community College in the fall thanks to a Tennessee Promise scholarship. She said she was still considering a major.

“It’s a new chapter,” Amy Hernandez said. “This is not the ending; this is the beginning.”

Jennifer Brewster, who teaches government and economics, assisted graduates with their caps and gowns before the ceremony.

“I feel like I’ve had all of these students,” Brewster said. “I feel like I’m not graduating one I’ve given birth to, but I’m graduating 160 of them. That’s hard. The parents are more nervous than the kids, for sure.”

Brewster experienced this year’s ceremony both as a teacher and a mother.

“Jacob is my baby,” Brewster said. “It’s hard. He’s my first. I have a daughter who’s a freshman in high school. It’s not easy, but it’s worth it. The joy outweighs the sorrows 70-fold to 100-fold. These are such good kids. They are so ready for the next step.”

‘About to take off’

With Bananarama’s “Na Na Hey Hey Kiss Him Goodbye” playing over the speakers in the Greenback School gymnasium Friday night, graduates tossed their hats into the air and began congregating in the cafeteria, where they were met with scores of family members and other loved ones.

Greenback resident Karen Smith, whose daughters Makenzie and Madison Smith both received their diplomas, tried to hold back the tears. Her daughters were set to take the next chapter in their lives, both with intentions to seek post-secondary education.

“(I’m) very proud of them,” Karen said. “Excited that they graduated, and I can’t wait for the next chapter of their lives.”

Makenzie and Madison described the night as “overwhelming,” but they were eager to move on to bigger and better challenges.

“(It’s) overwhelming, but I’m very, very excited to see everybody that I’ve grown up with” graduate, Madison said.

Both graduates plan to attend Pellissippi State Community College, where Makenzie hopes to seek a career in nursing. Madison plans to work as a mammography technician.

“It’s a once in a lifetime type thing,” Makenzie said.

Graduate Kevin Ogle took a moment to talk to family, thanking them for coming to see him receive his diploma.

“This is it; this is the real world,” Ogle said. “We’re about to take off. ... I’ve been real pleased with it, and I’m thankful for all my teachers and administration and everybody just supporting my along the way.”

Ogle said he plans to join the U.S. Army.

Brian Russell has something else in mind now that he has finished high school. He said he plans to get involved in “religious work.” Russell described his education as “excellent” from Greenback School.

“It’s different than other schools because it’s a lot smaller, but that just means that we got a lot more hands-on work,” Russell said.