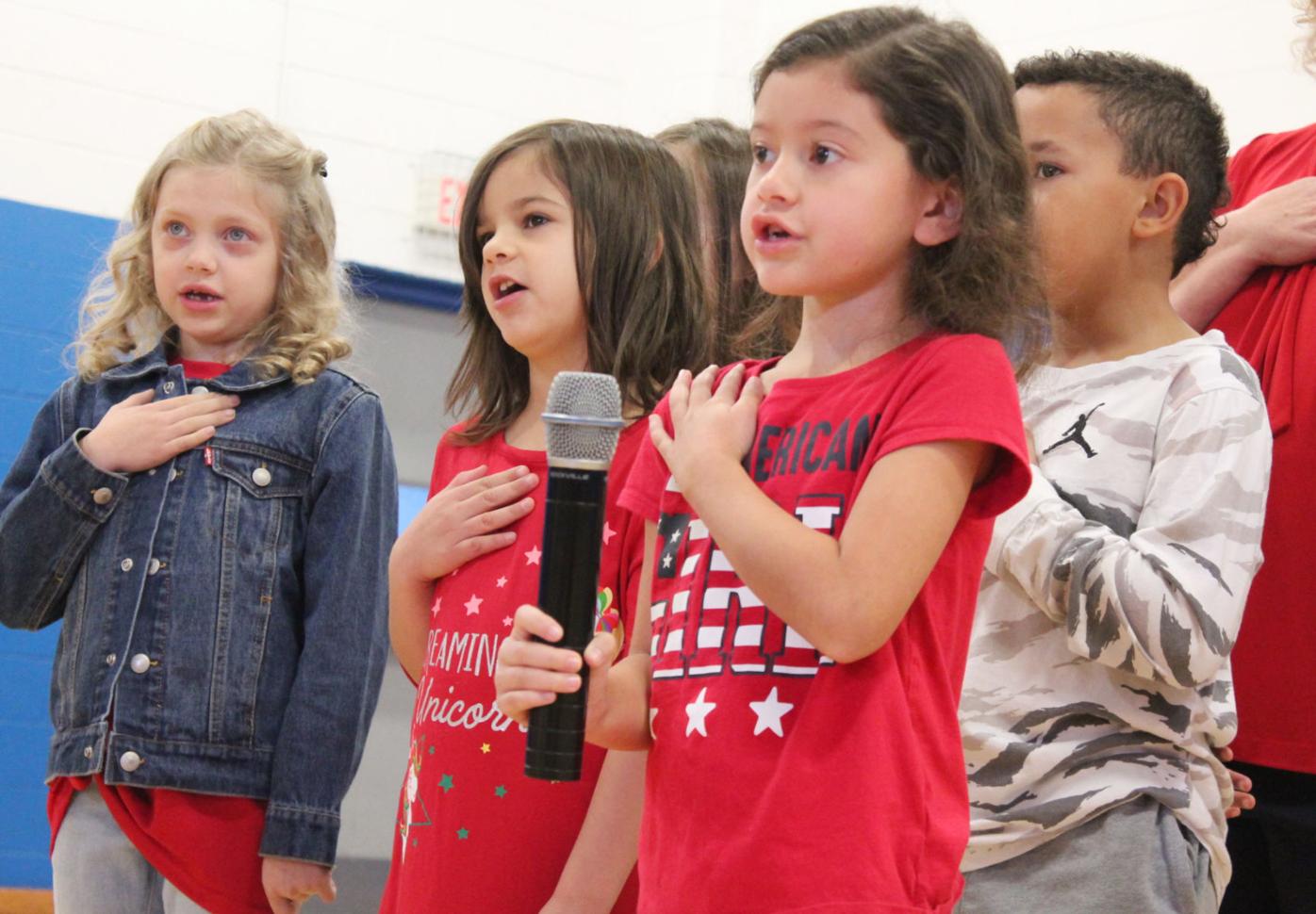 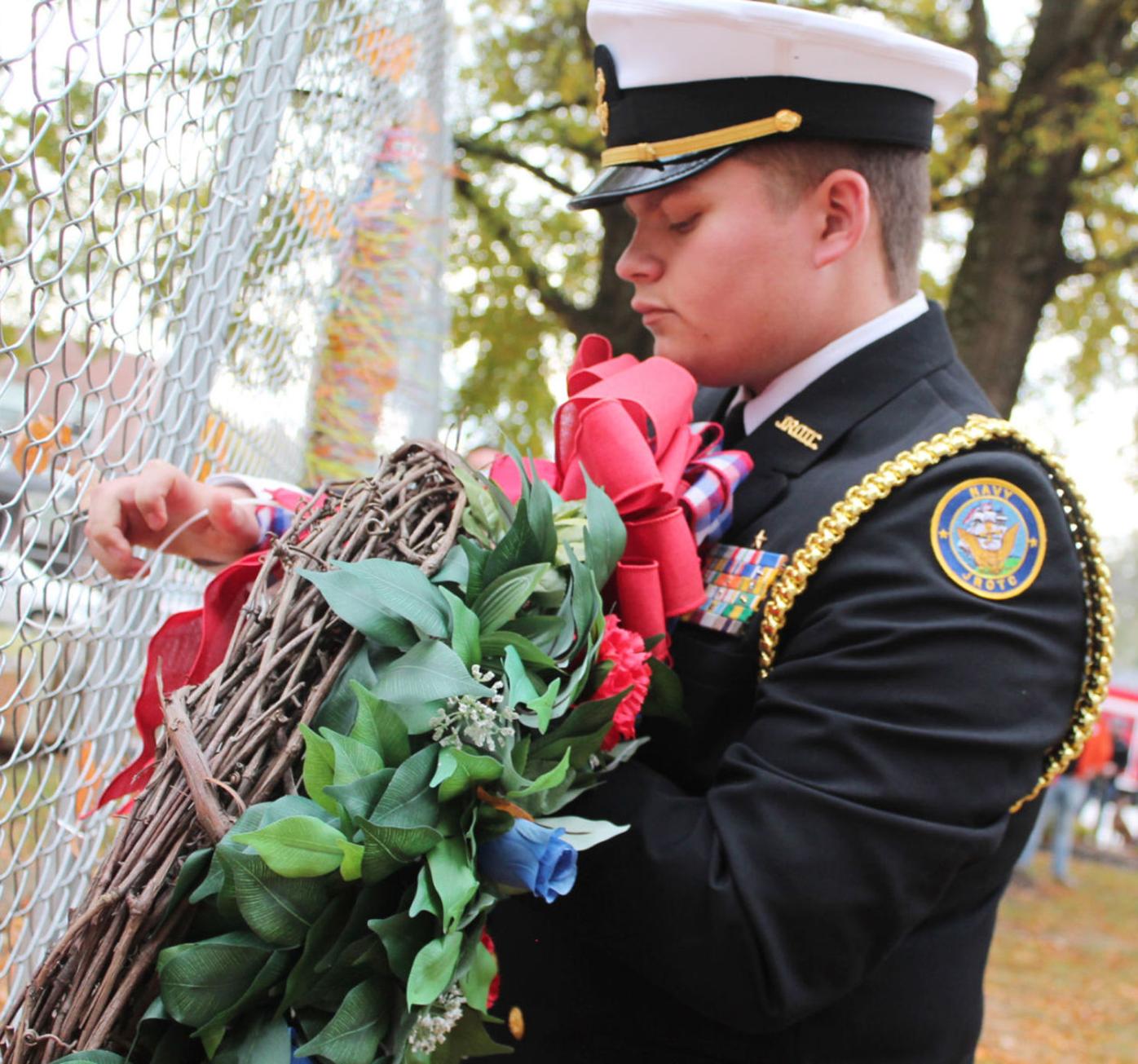 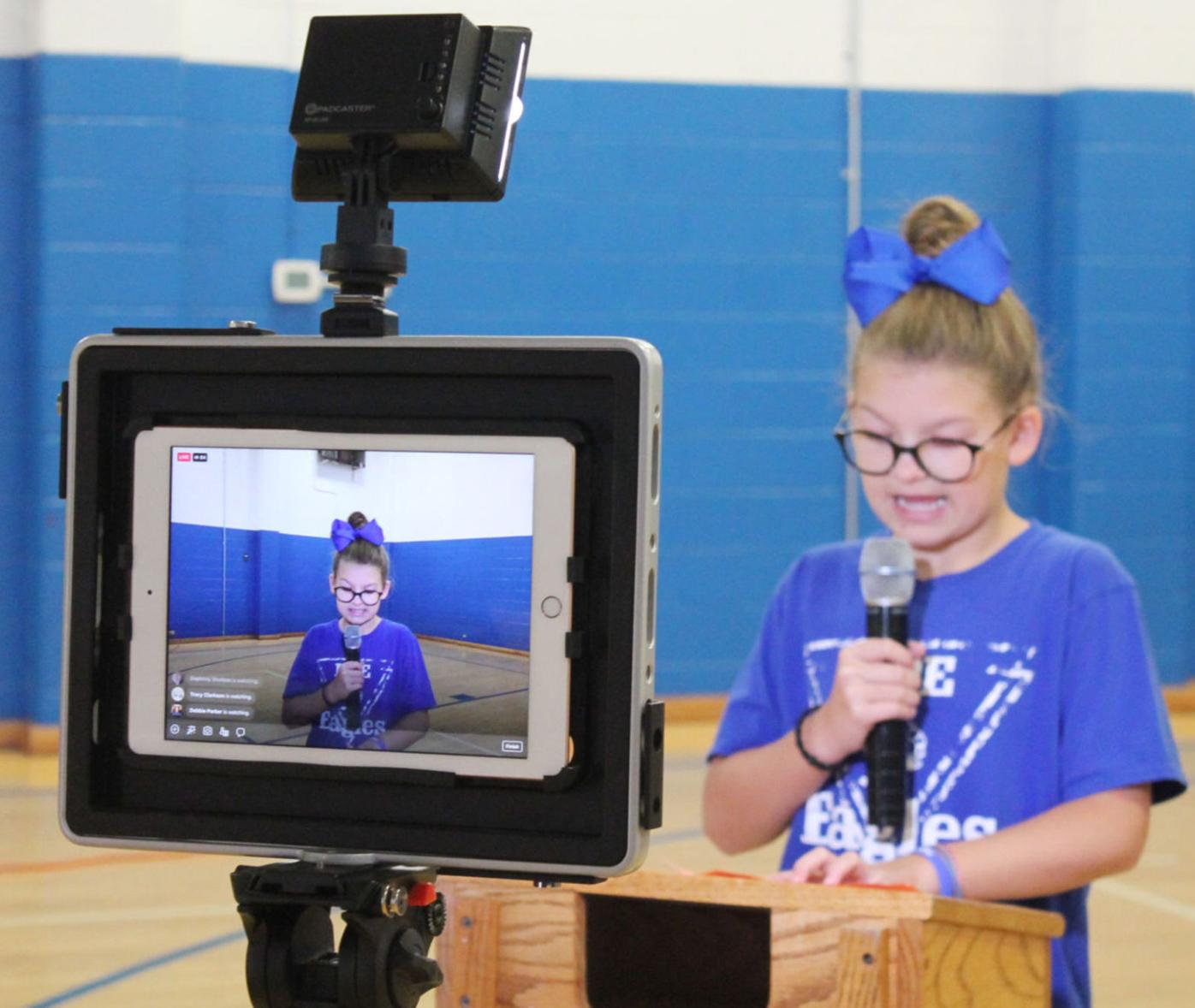 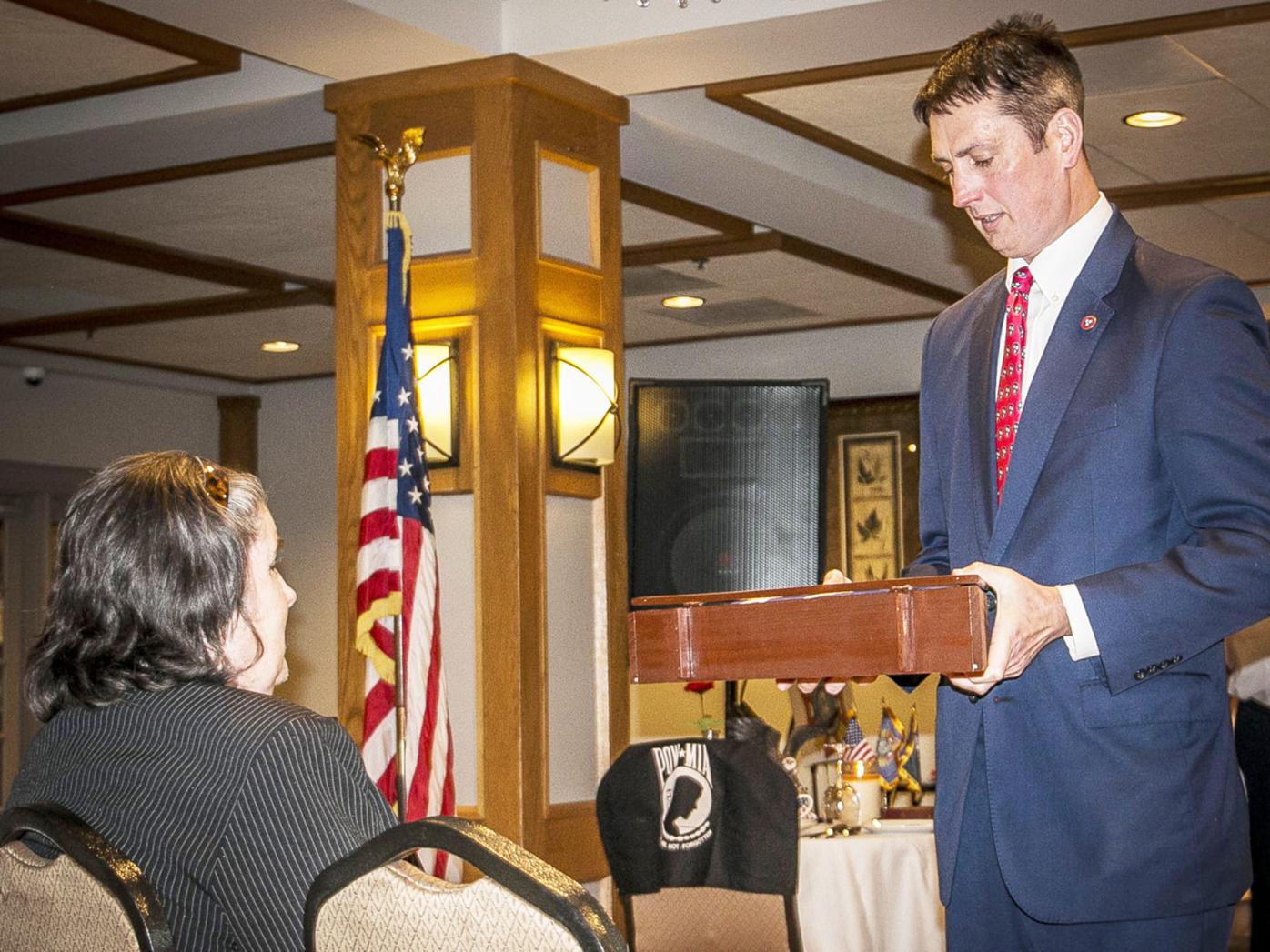 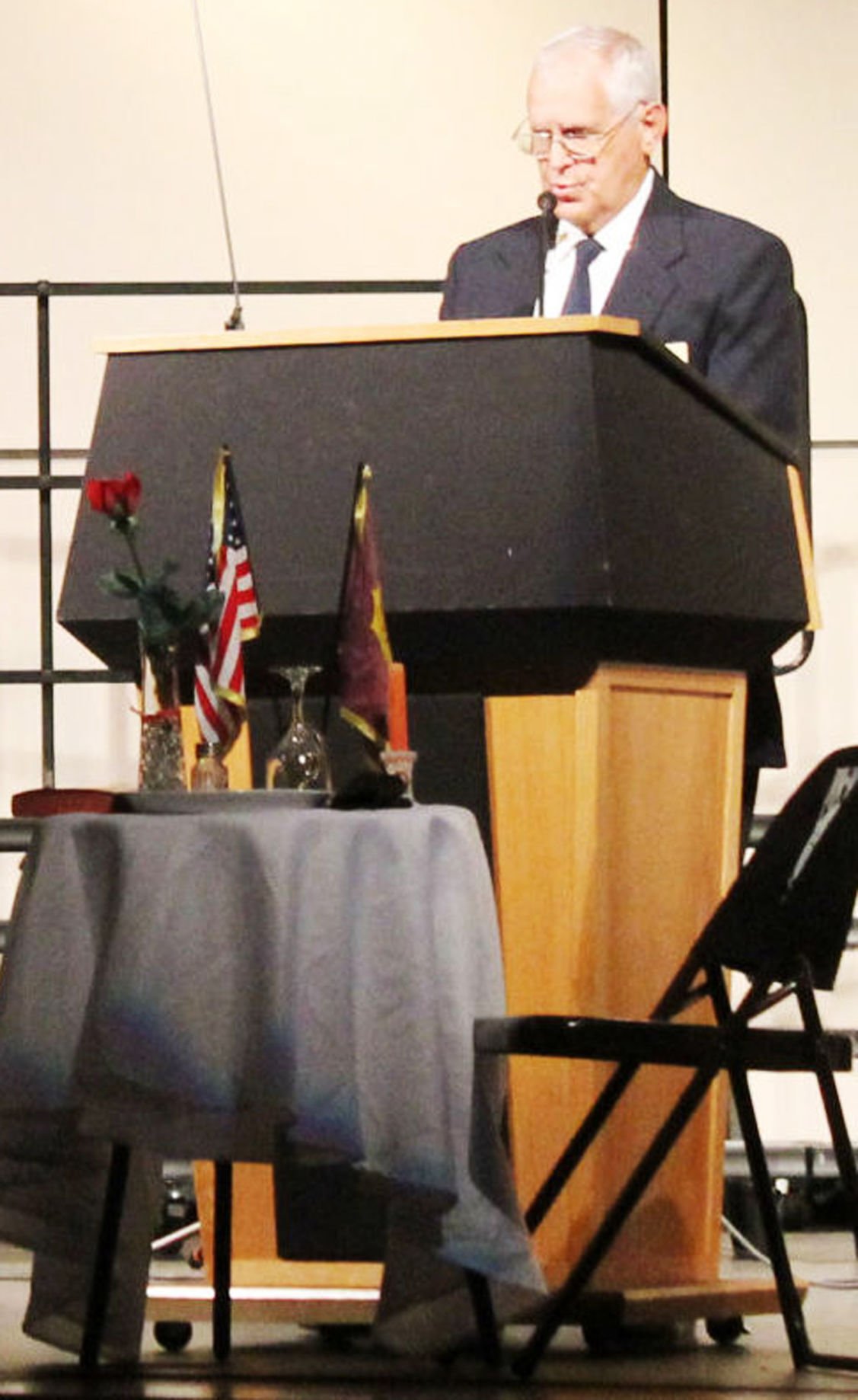 Jerry Scott describes the meaning of the empty chair in the Lenoir City High School auditorium.

Jerry Scott describes the meaning of the empty chair in the Lenoir City High School auditorium.

Residents gathered across Loudon County on Thursday for Veterans Day to pay tribute to men and women who have served their country.

Although conditions were windy and there was a chance of rain, several gathered in front of the Loudon County Courthouse. Members of American Legion Post 120 were present, along with local and state officials.

“Today we come together on this Veterans Day to express our profound gratitude to the sacrifices and the contributions you and your families made when duty calls,” state Rep. Lowell Russell, R-Vonore, said. “On this day, Nov. 11, we come together to honor and recognize America’s service members past and present.”

Russell said Veterans Day was an opportunity to celebrate all American veterans for their willingness to “serve and sacrifice for the cause of freedom.”

“Whether you wear the uniform today or wore it decades ago, the true strength of all our armed forces is the men and women who have worn and now wear the uniform of our nation’s military,” Russell said. “Your courage and skill made our nation a powerful symbol of strength and hope for the world. Every one of you deserves the gratitude of our entire nation for your willingness to lay down your lives.”

“Think about how many people have served or are serving right now, that many people care,” Hagen said. “That many people have sacrificed their lives for us, so thank you veterans for caring and thank you for your sacrifice. To the citizens of Loudon, do not take for granted the opportunities that have been given to us by the generations of those who served to protect our freedom and put their lives on hold to raise us and give us all we need. It is our responsibility to work hard and make the best of ourselves now because one day you’ll be the ones others depend on.”

Of Feezell’s three children, two were adopted from Asia and Africa. He highlighted each child and talked about their aspirations.

“I love all our veterans, but I wanted to say a special thanks to our Vietnam veterans,” Feezell said. “My daughter, she was born in Can Tho City just south of Saigon in a place where many of you served to protect, away from your family, halfway across the world, in the most difficult of times. I don’t know her birth family’s history, but I know she’s mine today and I can’t help but think your service in that area is part of why she’s able to be here. So that’s my family. Five proud, hard-working American citizens from all corners of the globe. ... I want to thank you veterans because five American citizens who live just across that river from three different continents, my children ... one was born into Uncle Sam’s family, and because of what you did, two more were adopted in thanks to your sacrifice.”

Tellico Village held a commemoration at the Yacht Club. The event, organized by Tellico Village VFW Post 12135, included the recognition of a fallen soldier, a keynote speaker and an award presentation.

“The quote that was in the program is ‘You have never lived till you’ve almost died. For those who fight for it, life has a flavor the protected will never know.’ And that’s what Veterans Day is for all the people who for 200-250 years have stepped up when their nation needed them,” Tallant said. “It’s the day not just the country honors the veterans, it’s the veterans themselves, it’s their day to stand back and say, ‘Yes, we stepped up when the country needed it.’ But at the same time, it’s the day to talk about those who are currently serving.”

Tallant is a retired Navy captain who served from 1978-2005. He said events honoring veterans show younger generations that the idea of serving means something.

A veteran of the Vietnam War, guest speaker retired Gen. Doug Brown became a special forces commander and participated in Operation Desert Storm. He spoke of how the perception of the military has changed since he first enlisted in 1967.

Brown’s speech was followed by the presentation of the legion of merit to 1st Sgt. Kevin Meyer. A Tellico Village resident, Meyer had never officially been presented his award, a wrong the VFW post sought to right.

“We presented it to the state representative who was in attendance, (state Rep) Russell Lowell, and he turned around and handed it to her,” Tallant said. “The message there was that the people of the Tellico Village community will always keep the memory of her son, Lance Cpl. Frankie Watson, alive in our memory.”

Whether in person or virtual, schools throughout the county provided unique ways to honor those who served.

Although last year’s was more subtle and in the library, HPES Principal Kathy Winsor said this time was in the gymnasium and included a mixture of live and recorded performances. Classes in kindergarten through fourth grade were given the opportunity to decide how they wished to contribute to this year’s ceremony.

Some students walked up in front of a tablet, which was used to livestream on the school Facebook page, to read poetry or say what they appreciated about veterans. Others sang patriotic tunes or recited the Pledge of Allegiance.

“We have a lot of folks who come in so we just weren’t sure what it was going to look like with COVID,” Winsor said. “And we don’t have a big space to put people, we just have the gym. That’s the biggest reason. We’re hoping to get back to live next year because we have a lot of folks who like to come and join us. We recorded part of it and we did live part of it just so we’d have a mix of it and it’d be a little easier with transitions.”

Winsor hoped Thursday reminded students the importance of those who came before them.

“We always want our children to be aware of Veterans Day and what that means, so we felt like letting each grade level be involved in their own way it gives teachers a chance to talk about at each grade level on children’s own terms,” she said. “I don’t want them to ever forget because a lot of kids it’s their grandparents or their older folks that they’re familiar with in the military, so we want to make sure that they’re aware of the sacrifices that people paid so that we do have our freedoms today.”

“I’ve just always been so patriotic,” Myers said. “I love our country and I think we owe so much to them people, the men that preceded us and fought in World War I and II and Korea and Vietnam and Desert Shield and Desert Storm. Through the Ruritan (Club) I work a lot of in the flag service, been doing it 57 years, and I just love that flag. I like to see it because I know what it stands for. It’s remember those people that gave so we’d have the right to be where we’re at today.”

{p class=”p1”}Houser, a retired Navy commander, served four tours in the Middle East, one in Africa and one in Europe beginning in 1984.

{p class=”p1”}“It means a lot,” Houser said. “When we’re serving in the military, we’re overseas. We’re separated from families and friends. Something like this brings everyone together and you get to hear about the Air Force, the Army, the Marines, the Navy. We get to hear the stories. It reminds us why we went over in the first place.”

{p class=”p1”}Houser made way for the school choral, which sang the songs for all five branches of the military, with veterans from each invited to stand when hearing their tune.

{p class=”p1”}After the choral left the stage, American Legion member Jerry Scott explained how an empty chair at a small table paid tribute to those missing in action or who were prisoners of war.

{p class=”p1”}Col. Rafael Pubillones, the main speaker, retired in 2003 after 27 years of active duty in the U.S. Air Force. He spoke of the importance of the day, the suicide epidemic among veterans and ended on a call to action for young adults to get involved.

{p class=”p1”}“It was really important to us because we were able to have our teachers come down, and also kids really see some military veterans talk about that and tell them what it means,” Brandee Hoglund, LCHS principal, said.