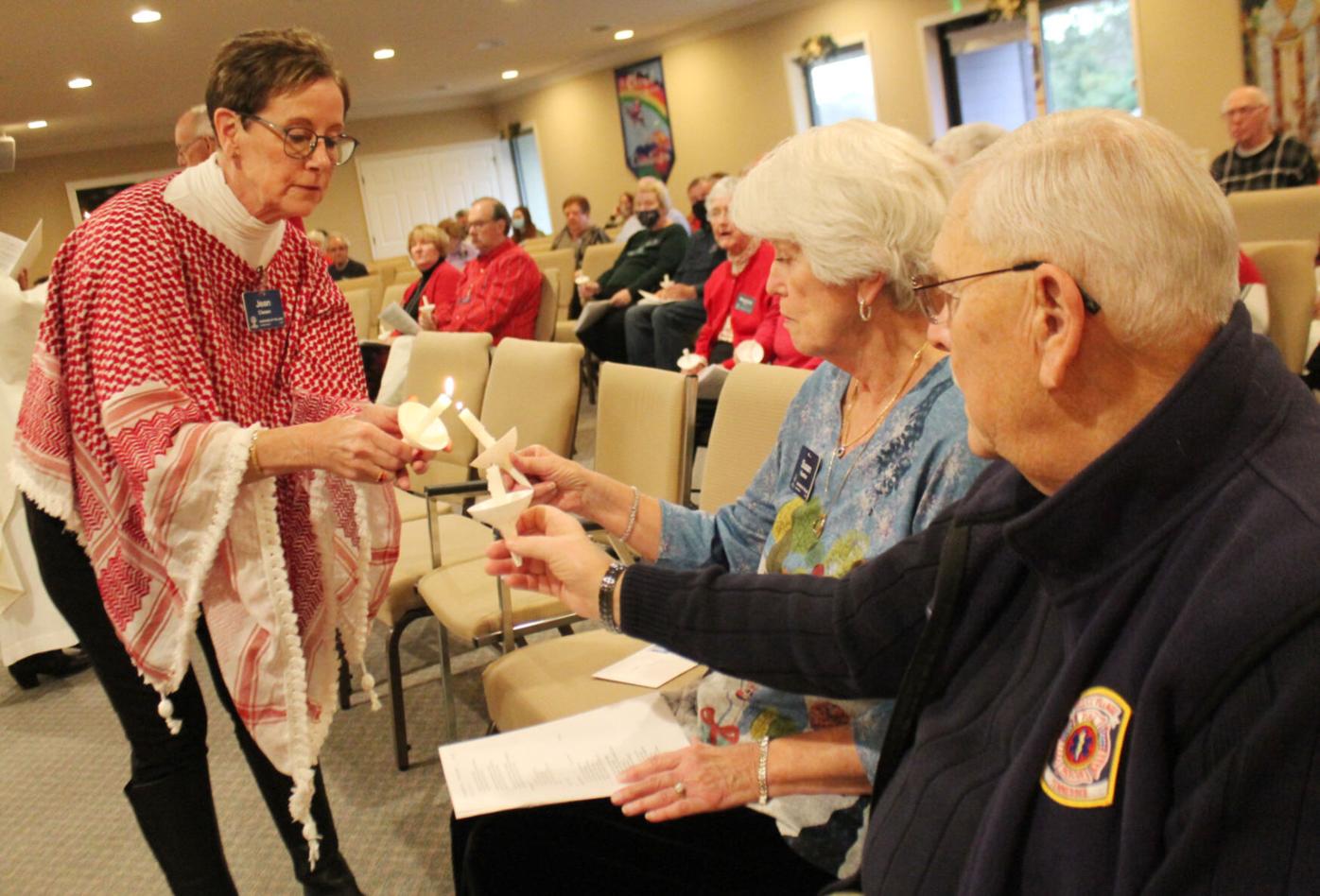 Jean Clesen, from left, lights candles for Susan and Howard Kastner during a Christmas Eve service at Shepherd of the Lake Lutheran Church. 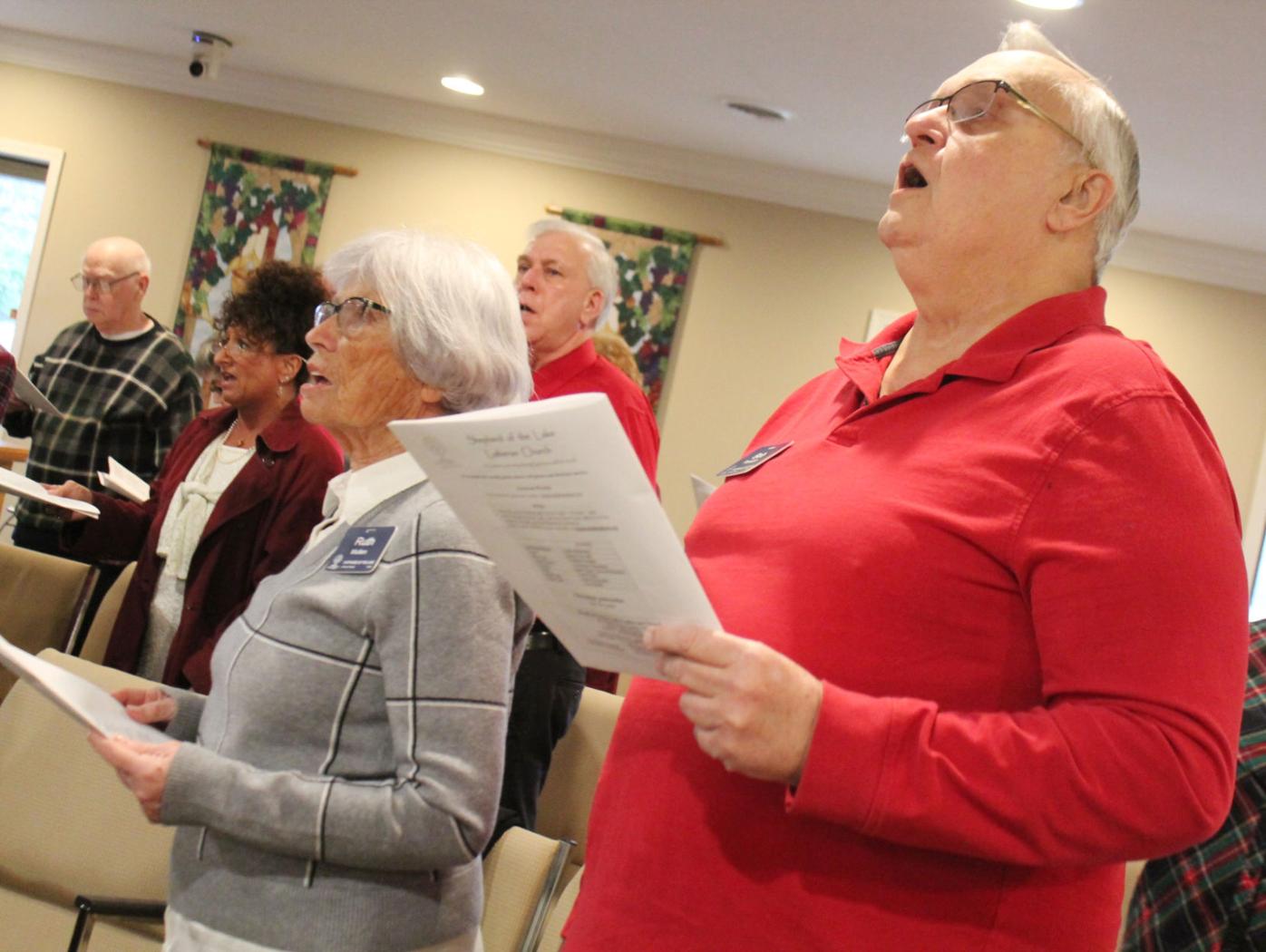 Ruth Mullen, left, Bob Panozo and others sing during a Christmas Eve service at Shepherd of the Lake Lutheran Church.

Jean Clesen, from left, lights candles for Susan and Howard Kastner during a Christmas Eve service at Shepherd of the Lake Lutheran Church.

Ruth Mullen, left, Bob Panozo and others sing during a Christmas Eve service at Shepherd of the Lake Lutheran Church.

Churches across Loudon County celebrated the arrival of the Christ child with candlelight services Christmas Eve.

Many congregations saw a return to in-person services after a year of COVID-19 concerns, which was a welcome change.

“Of course, we’ll have family members visiting, and this year we can welcome them to worship,” the Rev. Ingrid Schalk, Shepherd of the Lake Lutheran Church pastor, said. “I was remembering last year how I was preaching to a tiny little camera on a tripod in front of me. We couldn’t gather last year. I also remember the snow that evening. ... It gave me hope. It was just this overwhelming feeling of a sign that all is well and all will be well. That’s my jumping off point for (this) evening.

“That’s where we were last year,” she added. “And we still lit our candles, we had people who lit them last year but we had people light them at home. It was a bit of a challenge but it made sense we could still all do that together.”

Even with a virtual format in 2020, Schalk said she knew the service needed to happen because it was such an important tradition for many. She suspected gathering made this year’s service more special.

“Obviously, it’s very traditional but the real significance quite special for our folks really is gathering to worship and welcoming the light that is coming into the world once again,” Schalk said. “Our candlelight service, that’s how we end is with the candle lighting and the singing of ‘Silent Night’ and that’s the image that I’m really working with my sermon, too.

“It’s a sign of hope, this light coming into the world again when we’ve had so many difficult challenges over the past couple of years and presently there doesn’t seem there’s going to be an end to it, but the light that’s coming is something that will illuminate our path and that’s the way that God is showing us,” she added. “We don’t have an answer right now, we don’t know what the resolution will be, but we know that God’s going to be with us as we walk and live into the future.”

Schalk emphasized Tellico Village’s annual Christmas tree lighting, which brought out hundreds this year, as a sign that people are ready to gather. She hoped the same for Christmas Eve services.

“Let that light shine even brighter,” she said.

Friday also marked the final time Schalk would lead the service. After December, her call with the church will be finished.

A crowd gathered at Central United Methodist Church in Lenoir City, candles in hand, and sang “Silent Night” and “Joy to the World” during an hour-long service.

Central was also forced to hold a virtual service last year. The Rev. Scott Layer, church pastor, said he felt the congregation was excited to be in person.

“I think the people are going to look forward to it,” Layer said. “I think it’ll be special to actually be together even though that it seems like it’s getting worse than it was, but we’re looking forward to lighting candles and being in the same room. Last year it wasn’t the same because it snowed and then we had to do everything virtually. I think it’ll be a good way to end out the year and remember what Christmas is all about.”

Layer said he believes the service helps everyone present remember the true meaning of the holiday.

“Everybody comes to Christmas Eve, they want to hear the carols and be reminded of the simplicity and in the midst of kind of running from place to place and being busy, it’s a chance to stop and breathe and remember the Christmas story,” he said.