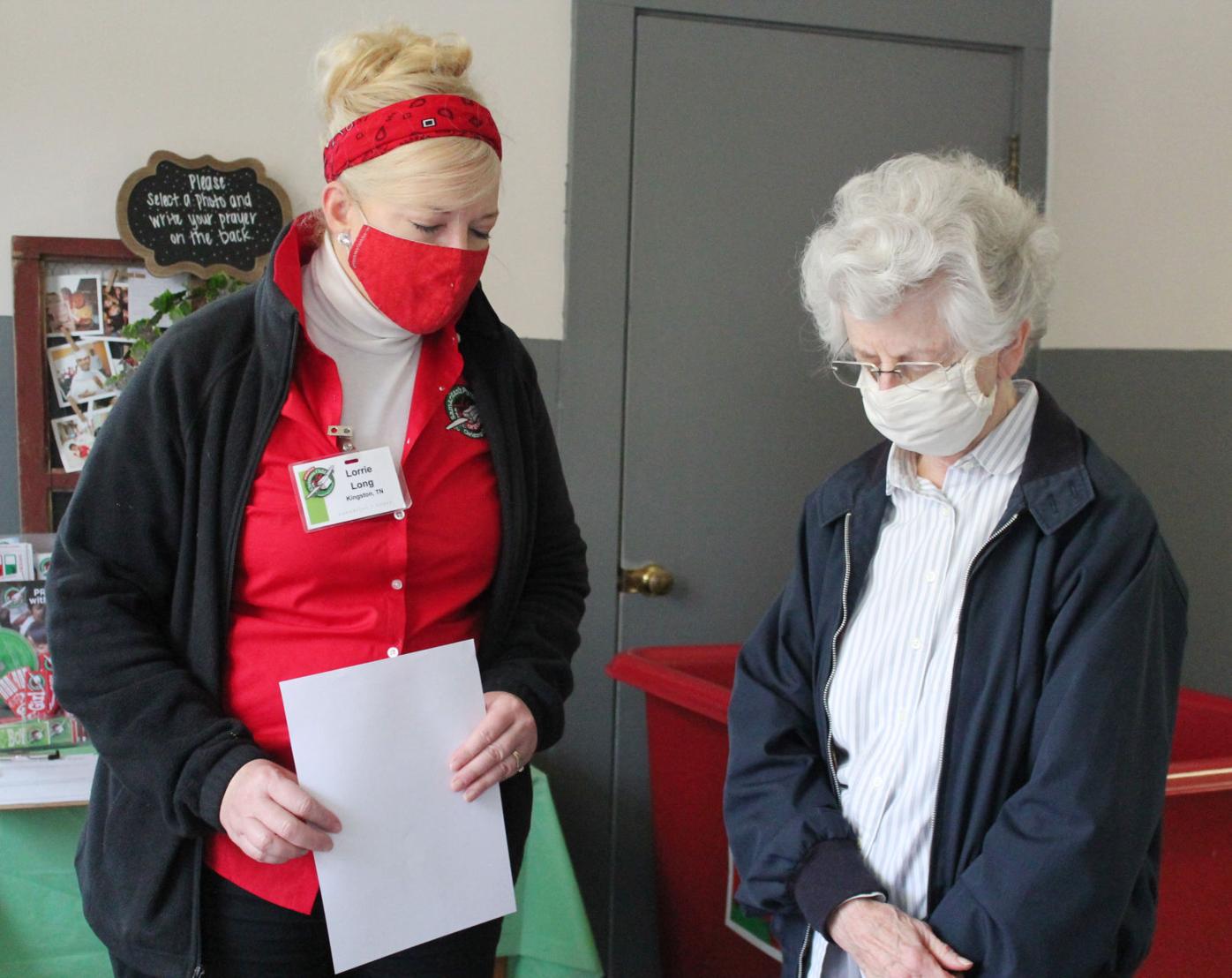 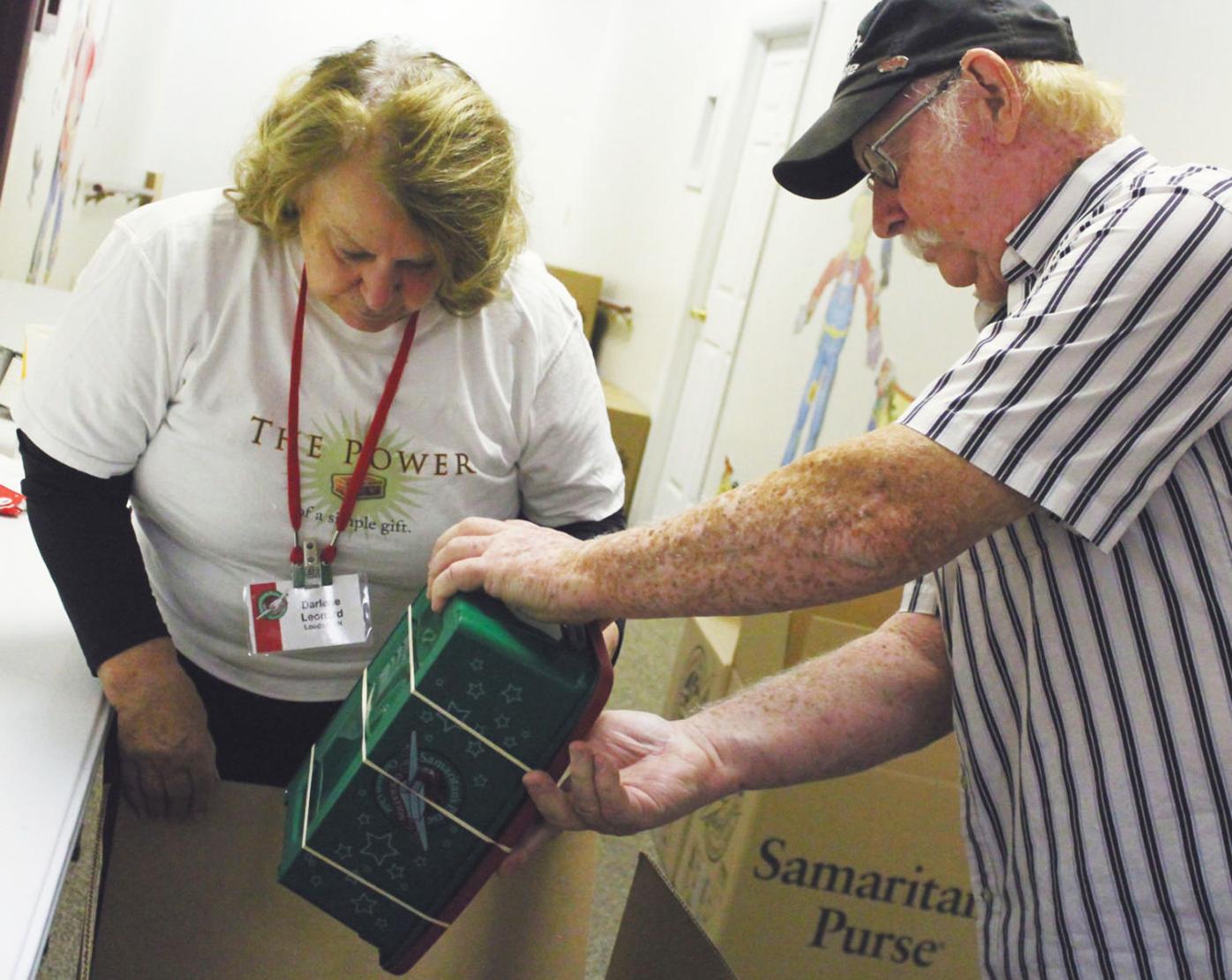 Thousands of shoeboxes packed with various gifts were loaded on a truck Monday at Calvary Baptist Church to be taken to Maryville and beyond.

The Lenoir City church for 17 years has served as a drop-off location for the Samaritan’s Purse Operation Christmas Child.

Darlene Leonard, church project leader, said from Maryville the boxes are then transported to Boone, N.C., Charlotte, N.C., or Atlanta, Ga., with a final destination on the other side of the globe.

The program serves as a way to “demonstrate God’s love in a tangible way to children in need around the world,” according to Samaritan’s Purse. The nonprofit partners with local churches worldwide to share Christ and “make disciples of the nations.”

“I mean that encourages us that we’re reaching out to all the children,” she added. “The children can do things that adults can’t. We have missionaries over there but they won’t talk to them or won’t let them talk to them, but when their child comes in, they’ll listen.”

Each box is filled with a variety of items, including toys, hygiene products and school supplies.

“They give us a list for each age group of boys and girls all the way up to 14,” Leonard said.

But what’s in the box isn’t as important as the message, Jerry Leonard, Darlene’s husband, said.

Each box was prayed over when delivered.

That number was down from before the COVID-19 pandemic when more than 3,000 boxes were donated, Jerry said. He credited community support for the outpouring.

A final amount collected this year could not be determined by News-Herald presstime.

“They just love to take care of the kids. They want these kids to be saved,” Darlene said. “They said through the organization that maybe two kids out of five boxes are saved. ... When they do this and they go into places in countries that’s not been reached, that missionaries don’t have a foothold in, then when they leave they welcome the missionaries in and start a church. There’s a lot of churches that have been started out of this. We’re trying to reach the world for Christ.”

“I think the speaks volumes that they’re willing to go wherever and do whatever and go outside of our area,” the Rev. Gary Smith, NPBC associate pastor, said.

Two years ago, the church started a new ministry called Encore, which targets the needs of retirees or near-retirees.

“Kingdom-related service is a main focus of this Encore ministry,” Robertson said in an email correspondence. “This year, we decided that we’d start making items that would ultimately go into OCC shoeboxes, whose purpose is international evangelism. Each month, we meet for a couple hours to make jump ropes, friendship bracelets, wooden cars and trucks, stuffed animals, washcloth bunnies, spinning tops, popsicle stick airplanes, survival bracelets, etc., while enjoying conversation between folks in the same season of life.”

This month the church shifted focus from hand-making items to packing individual shoeboxes. Encore members used what they had made to start filling the boxes, then completed them with purchased items like crayons, pencils, note pads, hygiene products and other toys, Robertson said.