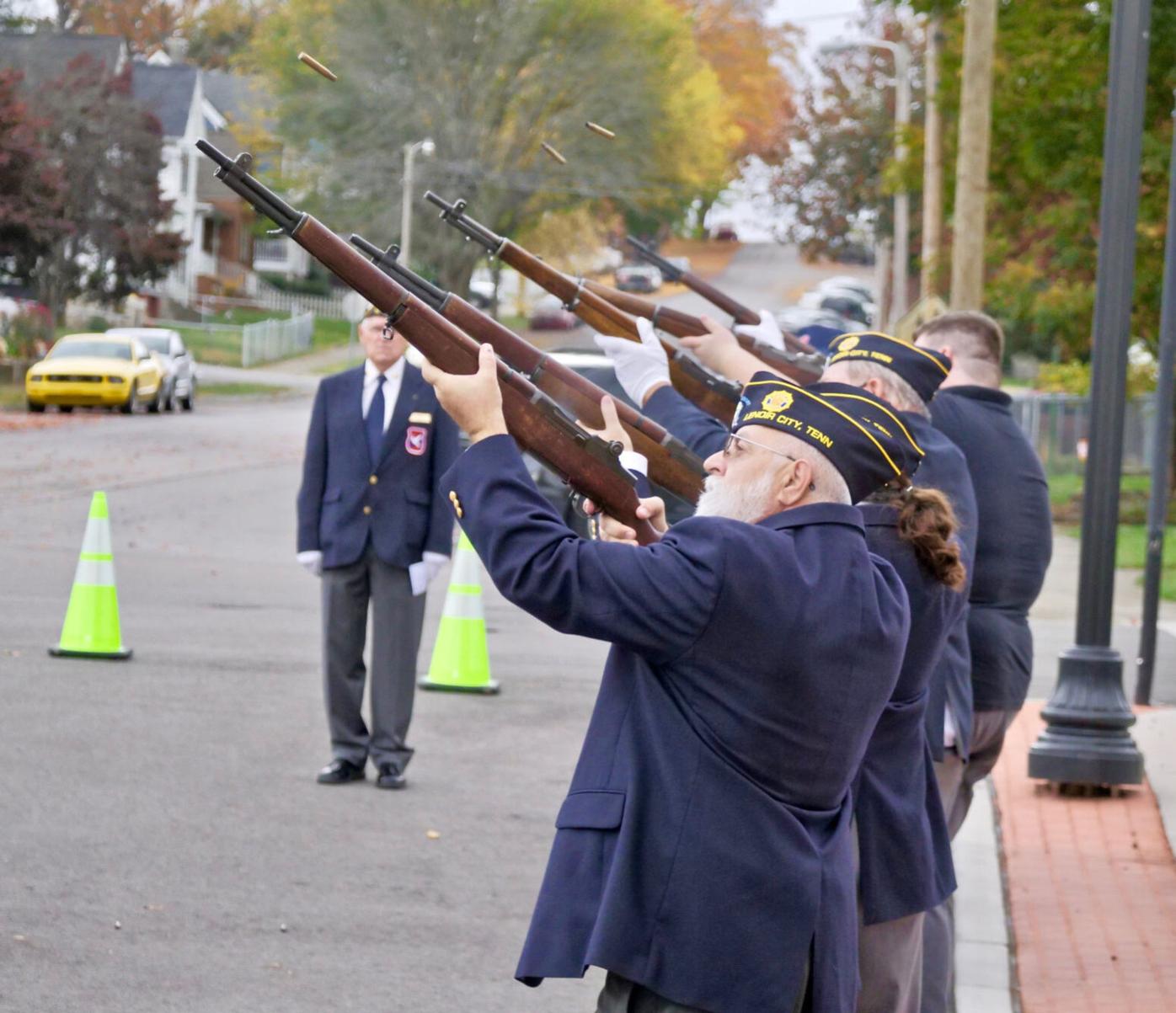 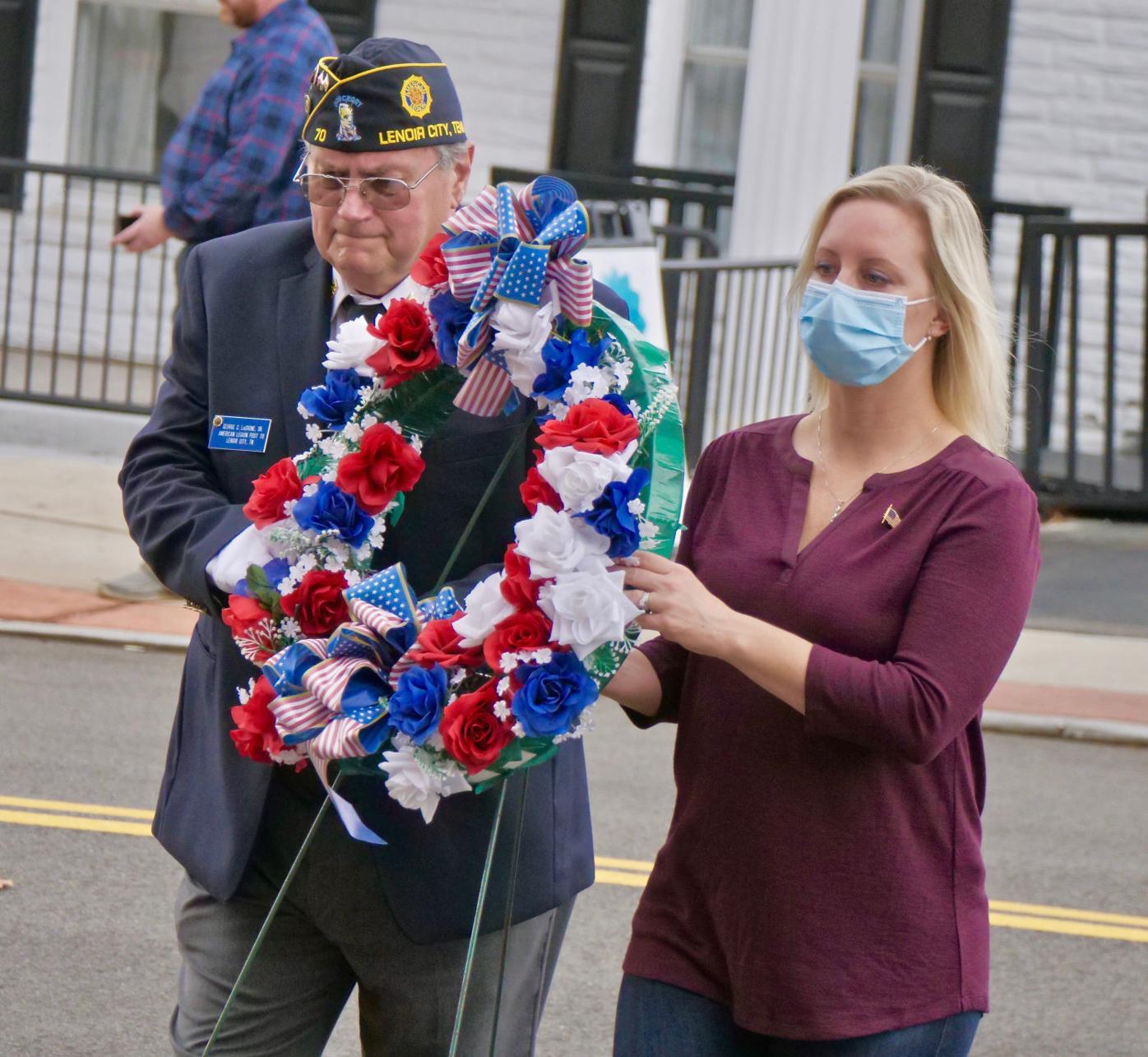 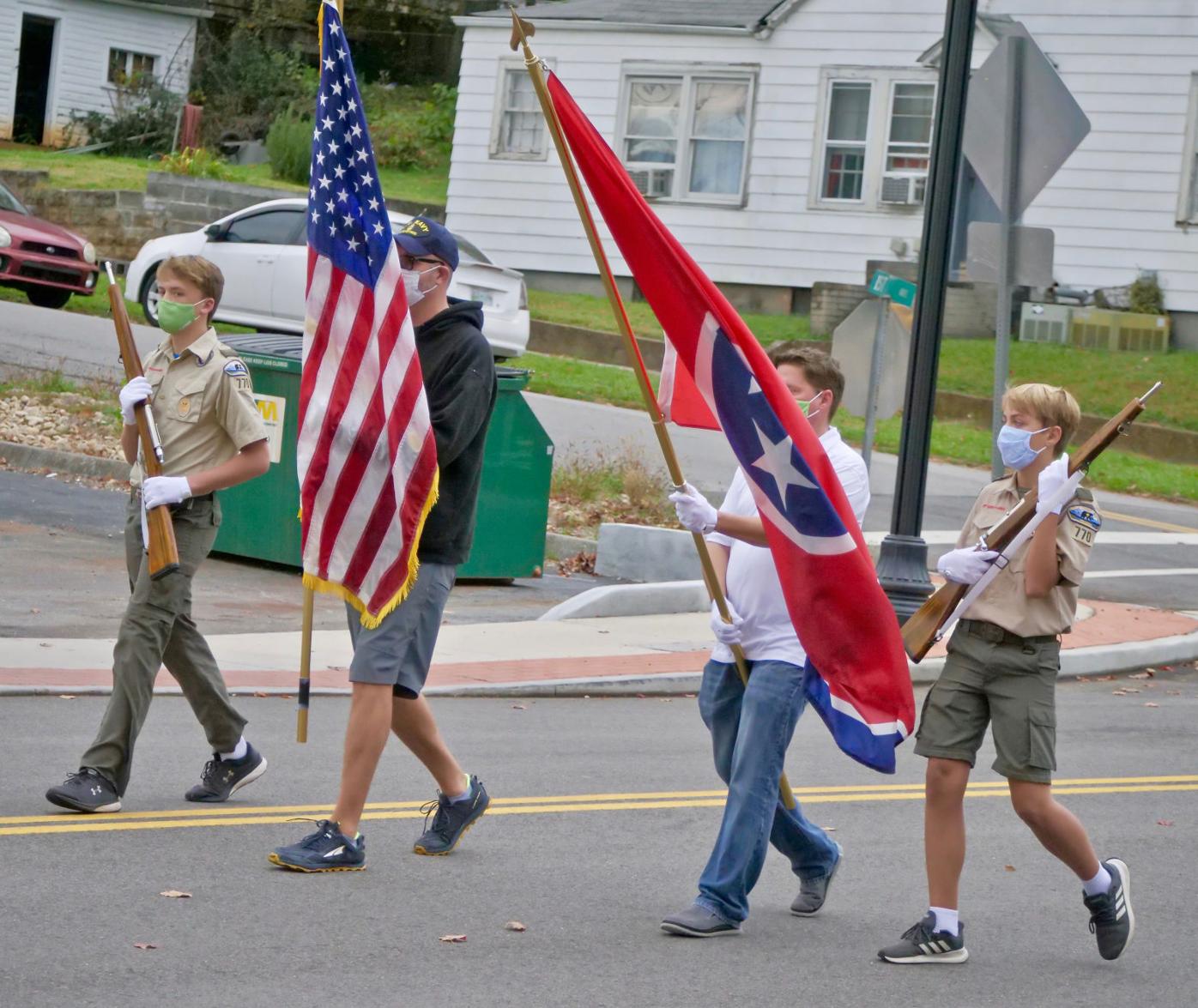 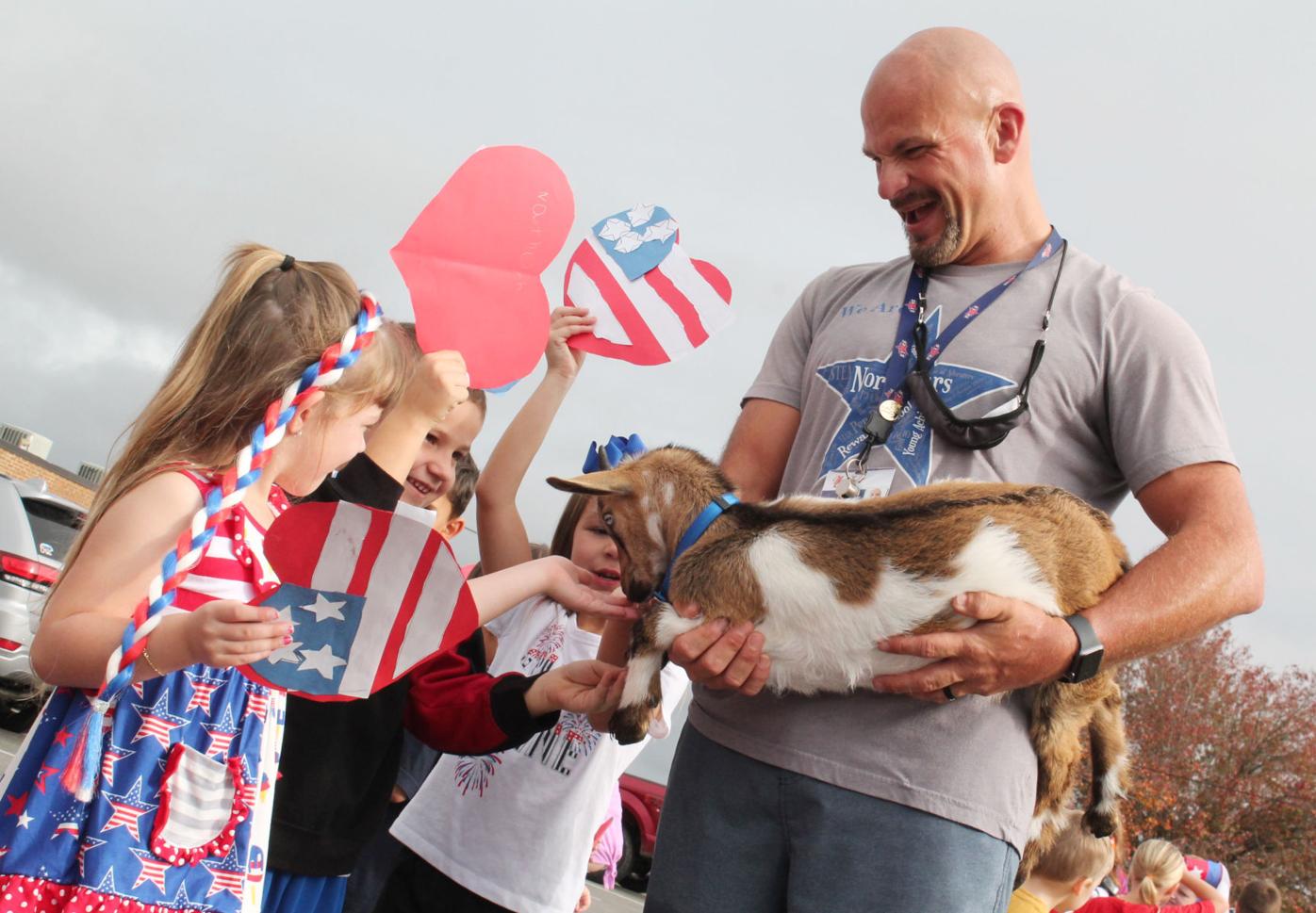 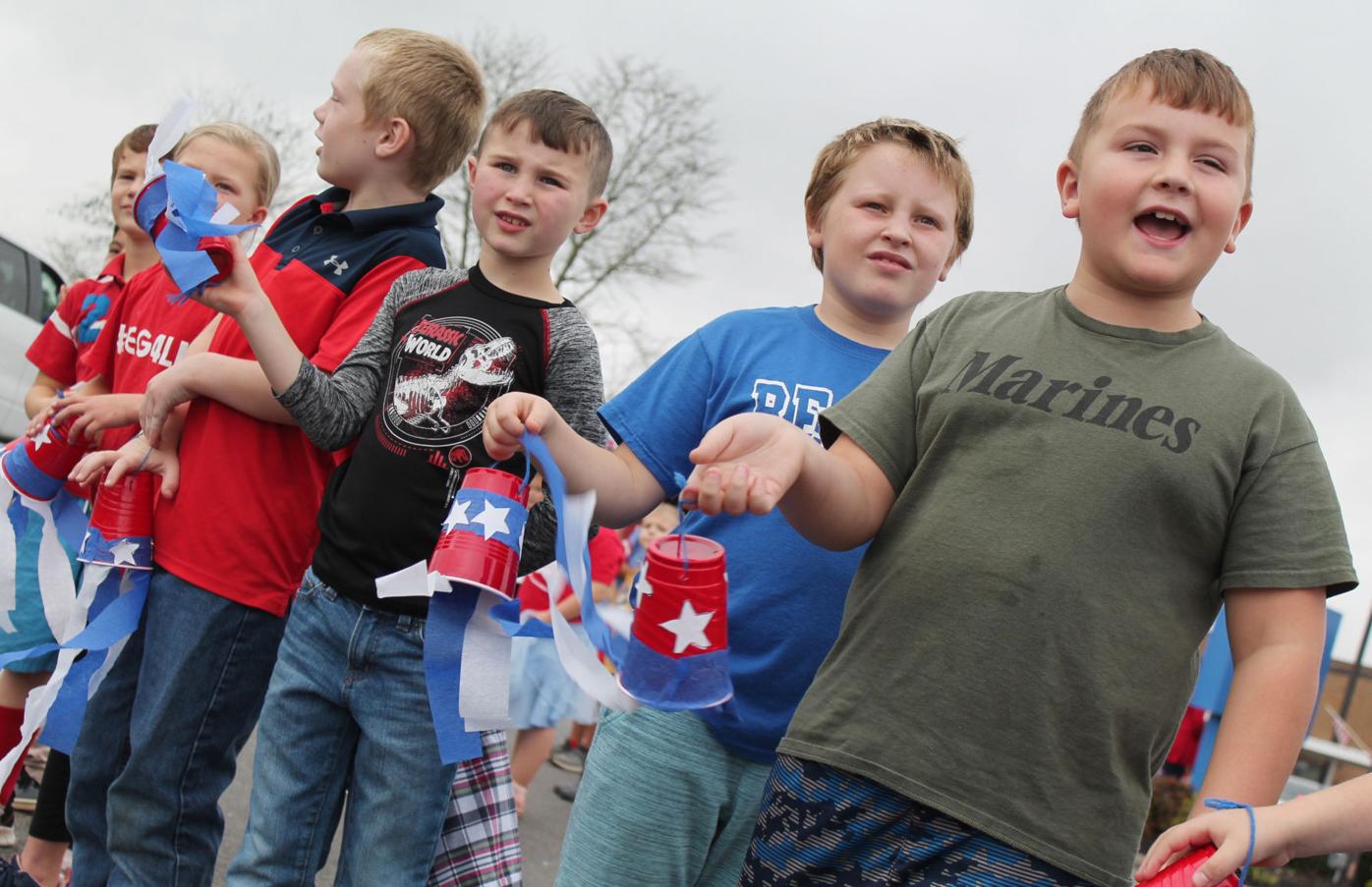 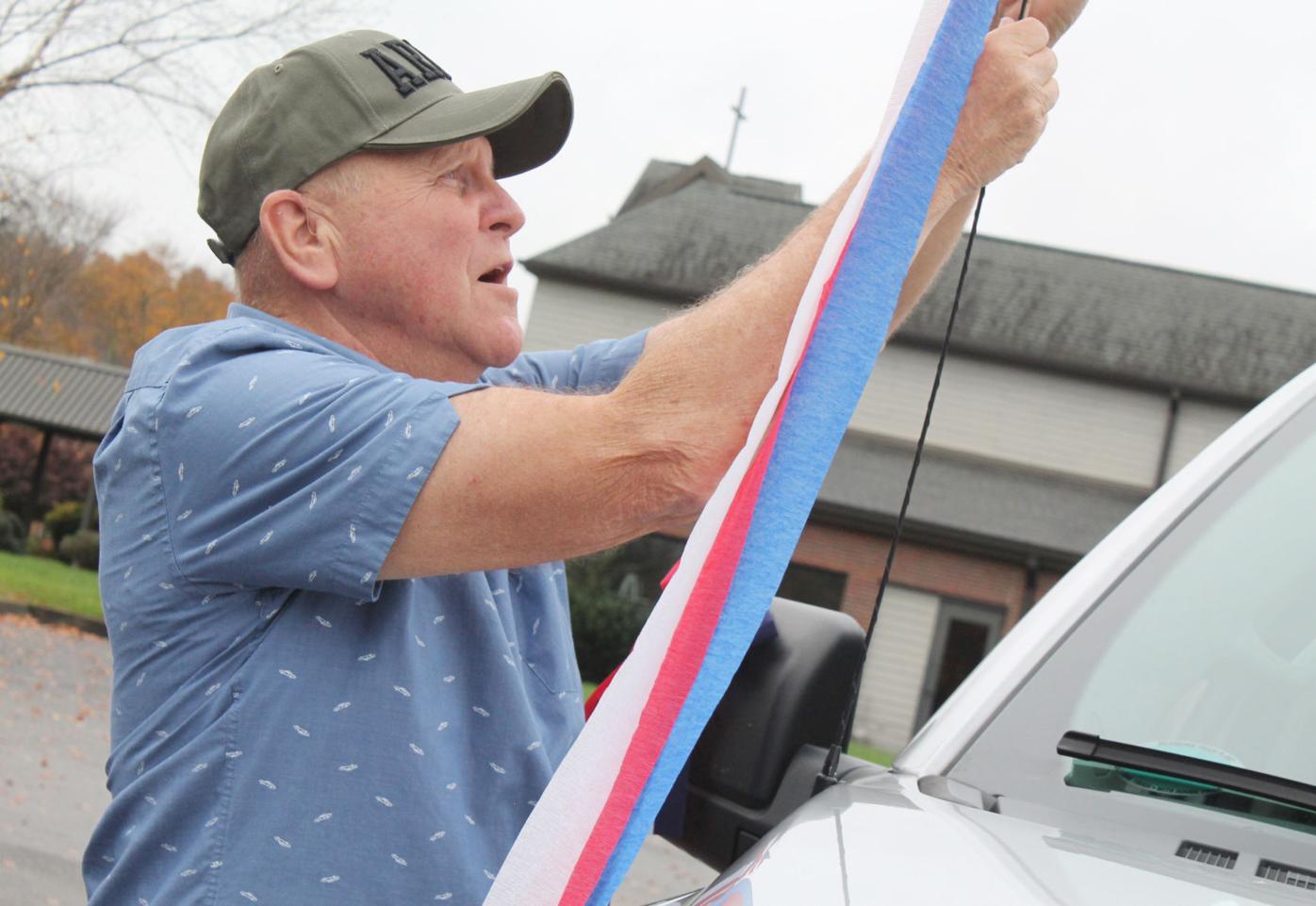 George Pope gets his truck ready for the Veterans Day drive-through parade at Eaton Elementary and North Middle schools. 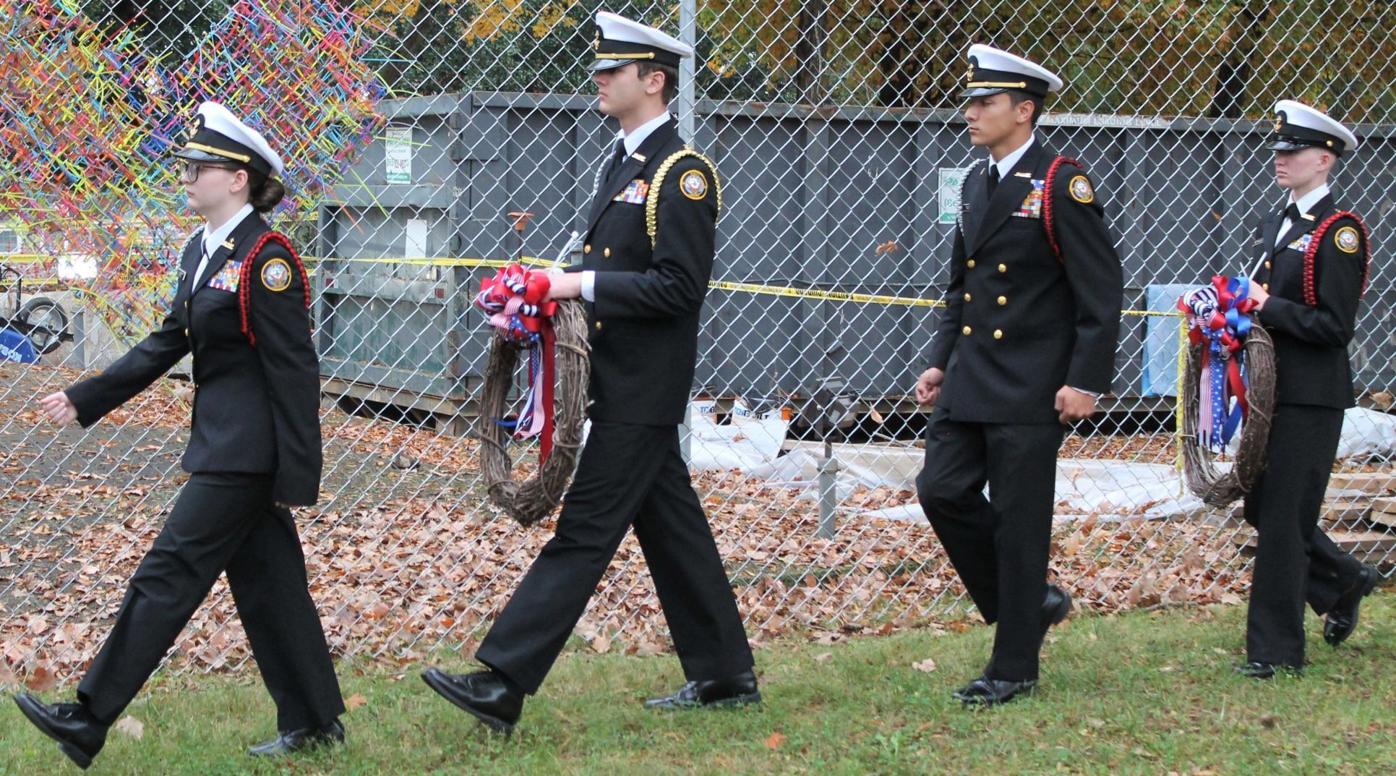 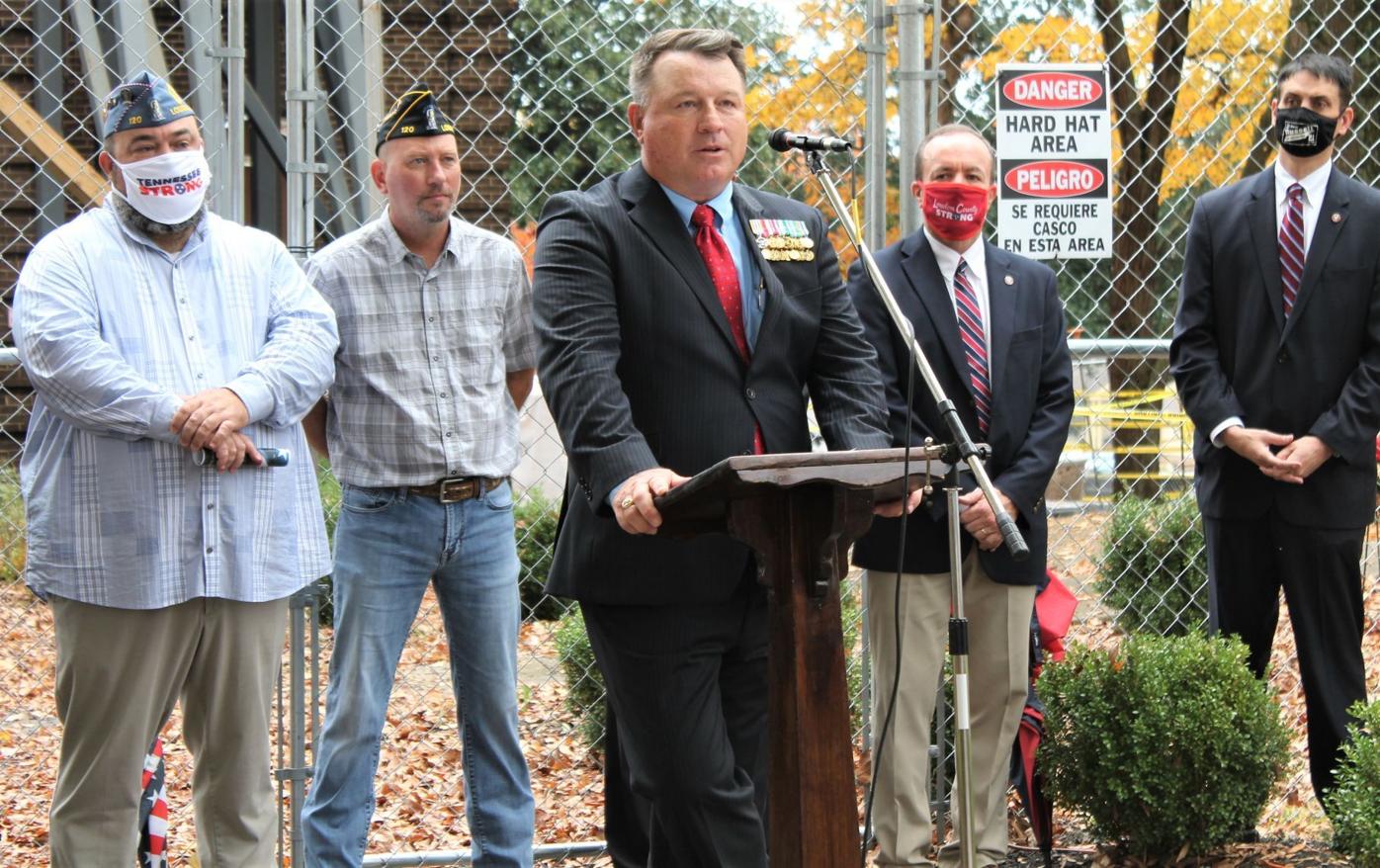 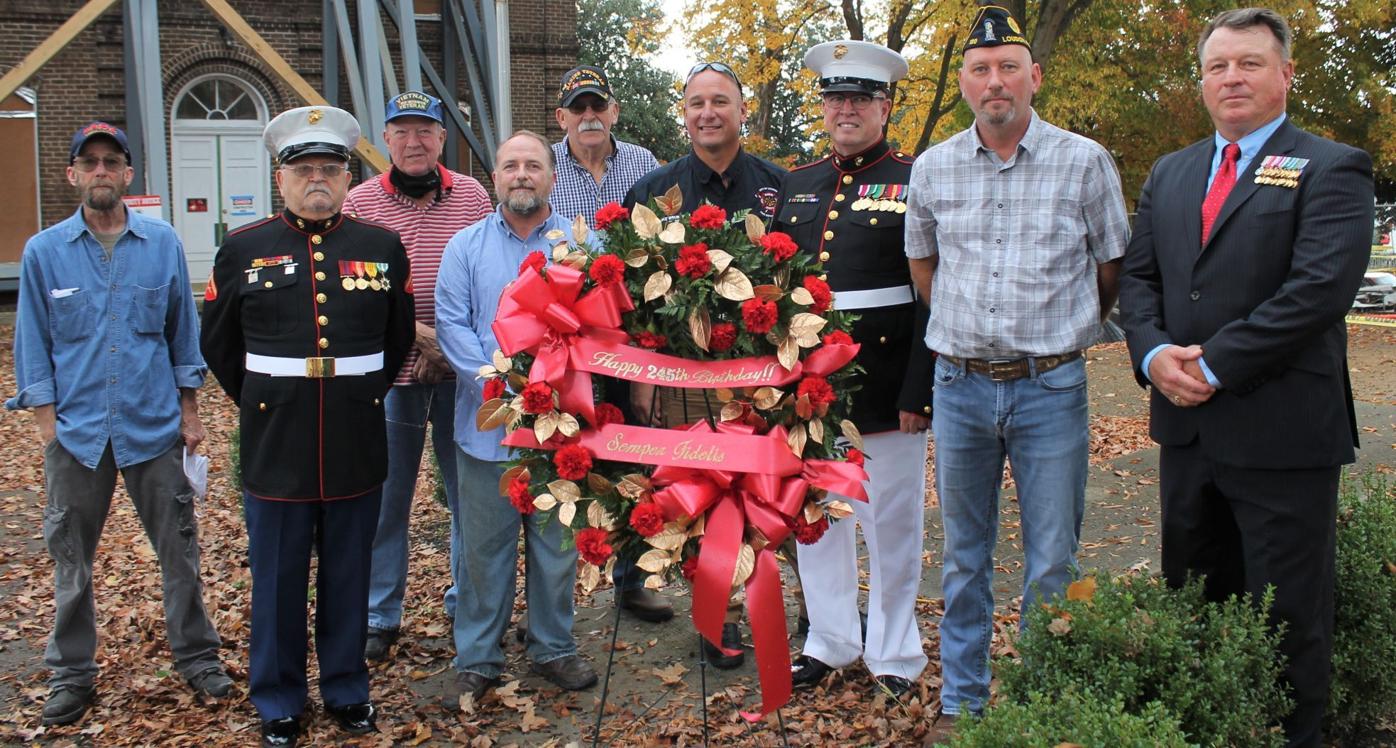 George Pope gets his truck ready for the Veterans Day drive-through parade at Eaton Elementary and North Middle schools.

Loudon County residents found ways to honor those who served their country Nov. 11 for Veterans Day despite rainy conditions and the COVID-19 pandemic.

Members of American Legion Post 70 and passersby gathered in the morning in front of the War Memorial Building in downtown Lenoir City to honor all men and women service members in a brief ceremony.

The event began with a presentation of colors by members of Boy Scouts Troop 770, followed by the national anthem, the Pledge of Allegiance and the placing of an honorary wreath to commemorate veterans around the world.

The ceremony concluded with a 21-gun salute and the playing of “Taps.”

Post 70 typically leads the ceremony at Lenoir City High School each year, but the event was shortened and moved outside.

“There have been 800-1,000 people, and last year we had the lieutenant governor, we’ve had congressmen,” Houser said. “Because of COVID and the threat of rain, I think it also adds to that so we had a lot fewer people coming out. At the high school, we had the choir behind us, we had the band and it was extremely well done. Because of COVID, we decided to have it outdoors. We do this every Veterans Day. It’s important to us that this is remembered, especially for the kids that are still over there.”

Pride and celebrations often accompany Veterans Day, but it can also be a difficult reminder for many who served their country.

“Unfortunately, more than 20 veterans a day take their own lives,” Houser said. “The U.S. Army recently reported a 30% increase in suicides among active duty troops in 2020. They serve to make our lives better than others, they serve to preserve our freedom. If you’re an employer, give some extra weight to the experience and skills of a sailor now turned job applicant. We’re their friends, coworkers and neighbors so let’s try to be there for them like they were there for us.”

Harry Rucker, Post 70 public affairs officer, was proud to take part in the ceremony after serving 30 years in the U.S. Navy.

He believes it’s important for younger generations to better understand the sacrifices millions of men and women who stood in the gap.

After an invocation led by the Rev. Brian Courtney, pastor of First Baptist Church in Philadelphia, the national anthem was sung by Beth Brakebill. A wreath dedication was presented by members of Loudon High School’s NJROTC.

Burchett told a story about his father’s time as a Marine in Okinawa, Japan, during Pearl Harbor.

“As a Christian, I owe the men and women who wore our country’s uniform everything I have in my life but my salvation,” he said.

“This is where all of us that haven’t served, that didn’t serve, this is our Thanksgiving,” Bradshaw said. “We live in the greatest country in the history of this rock. … Every day should be Veterans Day.”

“Today, we salute all the service of all veterans and keep in our thoughts and prayers the fallen, the missing and those who right now are serving in harm’s way,” Franklin said. “We also remember that honoring those who serve isn’t just about what we say here today. It’s about how we honor our veterans every day of the year.”

Some students waved and yelled, “Thank you for your service,” while others held signs showing appreciation.

“Our students and our teachers were so excited to take part in the parade today,” Jodi Lowery, NMS principal, said. “It brought them a chance to taste a little bit of normal everyday school life in this really strange year, and Veterans Day is a huge event here. They love to thank their veterans. A lot of their parents and grandparents are veterans and always take part.

“It’s really important that they got to take part in a ceremony and this was a great way to do it where the veterans could distance and remain safe and the students were still able to participate so they were all excited,” she added.

EES students crafted items in the three weeks leading up to the parade.

“Each grade level had a different thing,” Ashley Baessler, EES principal, said. “If it was just signs that they’ve made and painted, if it’s like a wind sock that they’ve made that’s red, white and blue and it had a lesson prior to today why they’re making this so that they could have it out there on Veterans Day.”

Baessler hoped the parade was something positive in a world that’s recently been largely negative.

Such appreciation was obvious for Dennis Greenawald, who for five years has participated in the school ceremony. Greenawald’s daughter, Shannon Smith, teaches fourth grade at EES.

“I think it’s just a way to show appreciation for us to show the kids that we actually care and that we love them and we served for a purpose so they would have the freedoms that they know today,” he said.

“It’s amazing based on what we received when we came back from Vietnam,” he said. “Just it’s like a difference from night and day, just the way the general public appreciates the military people now.”

George Pope, who served 1970-72 in the U.S. Army and came for grandson Richard Pope, wants youth to have respect for their country.

“Be proud for everything people have done for their country,” Pope said.

Schools around the county held virtual assemblies, with some of them having drive-by parades. Loudon-area school ceremonies were held Friday due to the weather forecast.