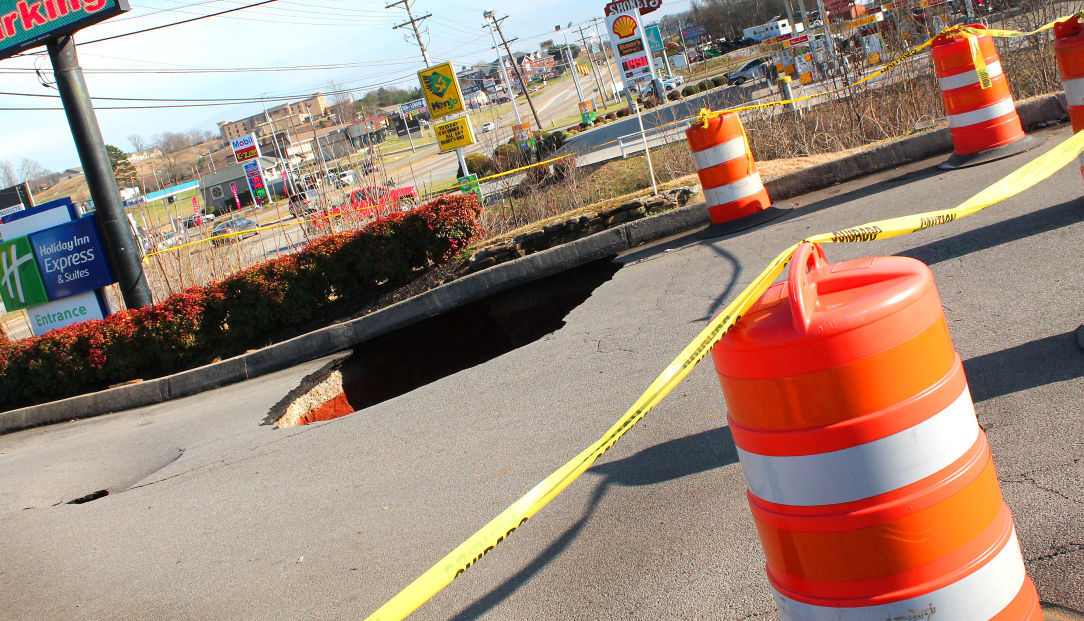 A hole developed over the course of a month in front of the Days Inn and Cinco Amigos Mexican restaurant near Interstate 75 in Lenoir City.

BEFORE AND AFTER: At left, a relatively small hole in the pavement begins to take shape in late December in front of Days Inn and Cinco Amigos Mexican restaurant. At right, the hole expands to block much of the south entranceway leading into the restaurant and hotel parking lot.

A hole developed over the course of a month in front of the Days Inn and Cinco Amigos Mexican restaurant near Interstate 75 in Lenoir City.

BEFORE AND AFTER: At left, a relatively small hole in the pavement begins to take shape in late December in front of Days Inn and Cinco Amigos Mexican restaurant. At right, the hole expands to block much of the south entranceway leading into the restaurant and hotel parking lot.

Loudon County residents or visitors to the area looking to dine or lodge before heading onto Interstate 75 may have gotten a little turned around. Literally.

A sizable crack in the pavement developed over the last several weeks and eventually led to an entranceway blockage in front of Days Inn, Cinco Amigos and other businesses in Lenoir City.

Susan McNutt, secretary and treasurer with McNutt Oil Company, said the crack was not a sinkhole, as business owners in the area first thought, but a depression caused by water erosion at the site that has progressed in the last 40-50 years.

“We’ve had a geologist there today,” McNutt said Friday afternoon. “We’ve looked at several consultants because we wanted to fix it correctly. ... It is technically not a sinkhole, we’ve been told.”

Dora Salgado, co-owner of Cinco Amigos Mexican restaurant, said the hole in the south entranceway leading to her store, Days Inn and Holiday Inn, began forming in late December and continued to grow, causing a closure of that part of the driveway.

The problem has impacted business.

“We’re kind of suffering a little bit because people don’t want to go around,” Salgado said. “There is a driveway — you have to cross the bridge in order to come back and get in.”

Lenoir City Police Chief Don White said city officials were initially not sure if the state or a private company were responsible for repairing the hole.

“After getting with our codes department and the state we determined that it was a culvert that has been added when they filled that area in back years ago,” White said, noting that since officials have added safety cones around the depression, the area was secure.

“We felt like that ground is stable from the area that we put the barrier around,” he said. “We felt like it was safe back well beyond the point and now that entrance is blocked.”

Mark Nagi, spokesman with the Tennessee Department of Transportation, said officials with TDOT have spoken with McNutt Oil Company, but since the depression was on private property, the state will not help repair the crack.

McNutt said the company has hired a contractor to correct the problem, and the site should be fixed by the middle of next week. She said although business owners in the area did not want the entrance to the property shut down, officials had to put up cones.

“We’ve been in touch with them, and they did not want that curb cut closed, but I went down there one day, and it was clearly an emergency,” she said, noting that the company learned about the crack earlier this month.

“We were told by the people we talked to that the hole was stable, but clearly it wasn’t,” McNutt said, noting that when McNutt Oil Company purchased the property, the problematic pipe was already in place.

“Fortunately, this has never happened before at any of our other business locations,” she said.

Salgado said she just wanted to convey one message during the repair process: Her doors are open.

“I just want people to know that we’re open back here, and there is another way to get in,” Salgado said. “... If your coming from downtown, you’ve just got to cross the bridge and make a U-turn where it’s legal, and lot of them (customers) are learning to do that.”