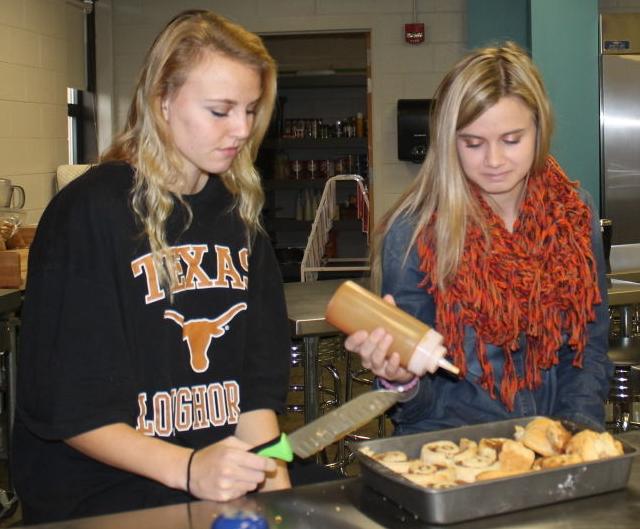 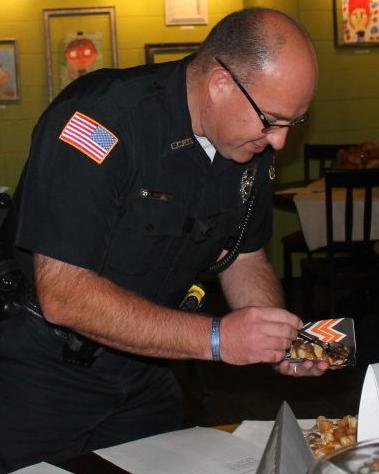 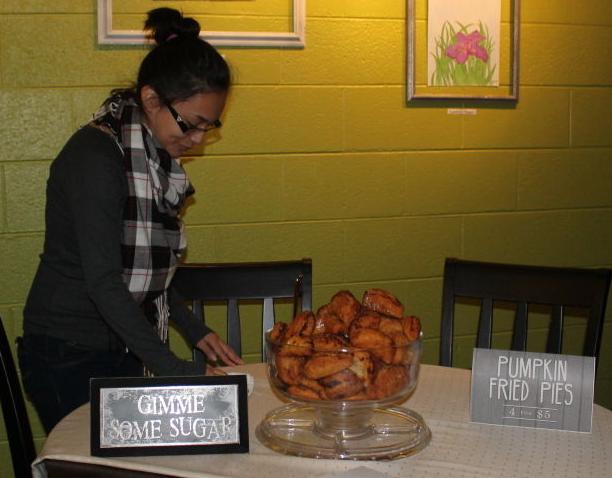 Lupita Castillo wipes off a table during the culinary arts tasting event. 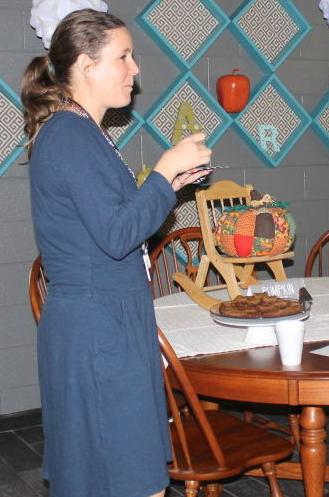 Lupita Castillo wipes off a table during the culinary arts tasting event.

“This is the first official event of the culinary program,” Melanie Harris, assistant principal and career and technical education director, said. “We started the program in spring of last year and finished the lab part around the first of September. This used to be a family and consumer sciences room, formerly known as home (economics).”

The school received a $125,000 grant for the program, with a total of $200,000 going toward the complete project, which includes the installation of a commercial kitchen.

Students in carpentry classes at the school did most of the work on the kitchen and dining area. The project began in August 2014, Harris said.

“They’re learning the skills they need,” Harris said about the culinary arts program. “We absolutely wanted to simulate a professional environment. Eventually, the students hope to start serving faculty and student meals by reservation with students helping design the menus.”

Pieces from Susanne Tyler’s art class were displayed in the dining area during the tasting.

“Part of the grant I wrote focused on collaboration, so we are trying to include other students,” Harris said. “The carpentry students helped with the room. Agriculture students provided fresh produce from the greenhouse and from the two gardens at the elementary and the middle school. Digital arts students were also involved. A journalism student helped create the flier. We are trying to do something that a lot of people can be involved in.”

Future plans for the program include bringing in chefs and other culinary arts professionals as guest speakers.

“We’re preparing kids for the next step,” Harris said.

The CTE program requires administrators to track students upon graduation. Harris said school officials have seen 100 percent placement in the military and in post-secondary education. Statistics show that 50 percent of all graduating seniors from LCHS will go on to college, Harris said.

Culinary arts student Lupita Castillo, who works as a hostess at the Yacht Club in Tellico Village, helped make dough for pumpkin fried pies at the tasting. Castillo wants to work as a full-time chef after seeing her father work in the industry.

“My dad is going to be the manager at Cinco Amigos with the new location in Loudon,” Castillo said.

Ashlyn Zeller, a senior at LCHS, said she enjoys cooking because it’s fun.

Culinary arts teacher Amanda Parks graduated from Walter State Community College in 2005 after completing an internship at Walt Disney World. After moving back home, she became the head baker at Gigi’s Cupcakes in Turkey Creek and then worked at Chili’s for eight years before joining the faculty at LCHS.

“This has ultimately been my goal,” Parks said about teaching. “Not necessarily to students, but I’ve been involved in training my whole professional life. This was a pleasant surprise.”

“Most people don’t consider this to be a big school, but it’s a pretty big school when you think that there’s certain people we don’t get to see every day,” Parks added. “Teachers don’t appreciate (the culinary arts program’s) existence. We wanted to introduce them to what we do. We can bring them in and show them we can make it happen. We can make it fresh and deliver it to them.”