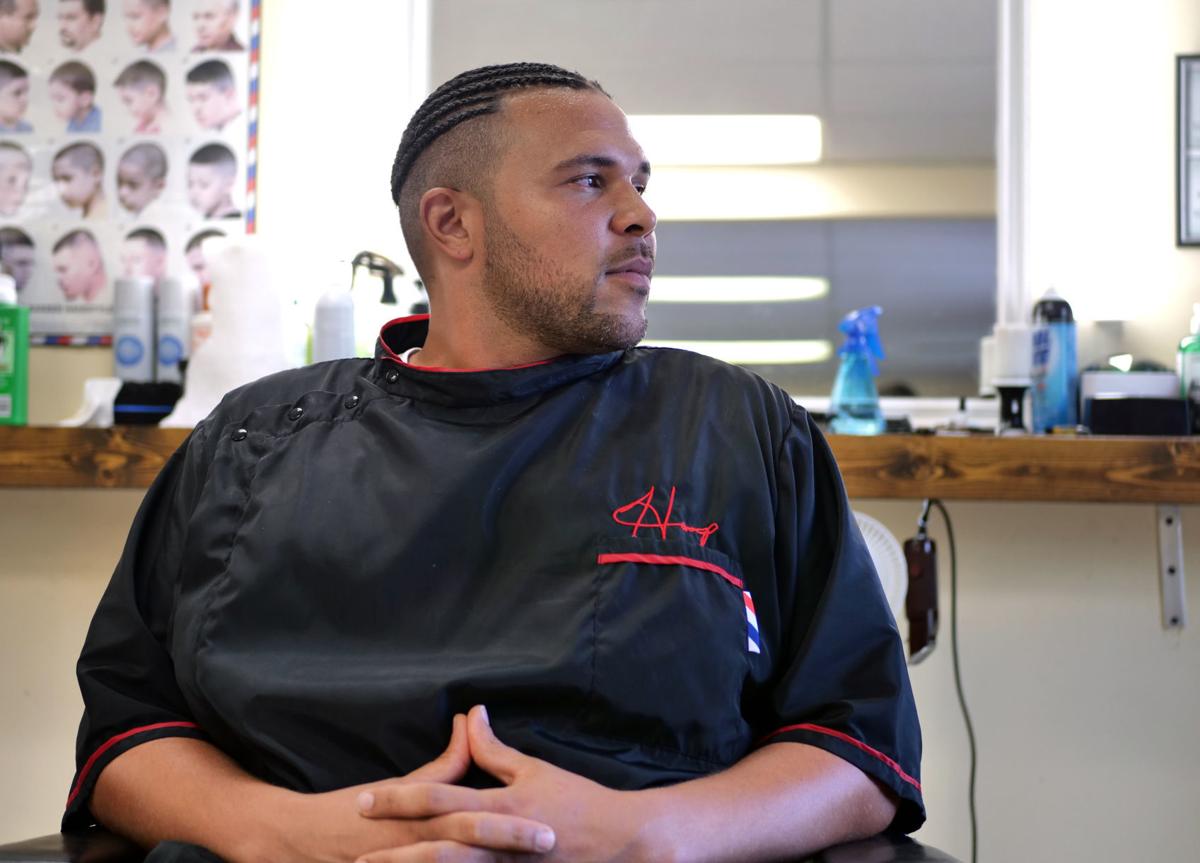 Daniel Hampton’s life was changed nine years ago after spending six months in jail. He is now married, has three children and owns Hamp’s True Definition Barbershop in downtown Loudon. 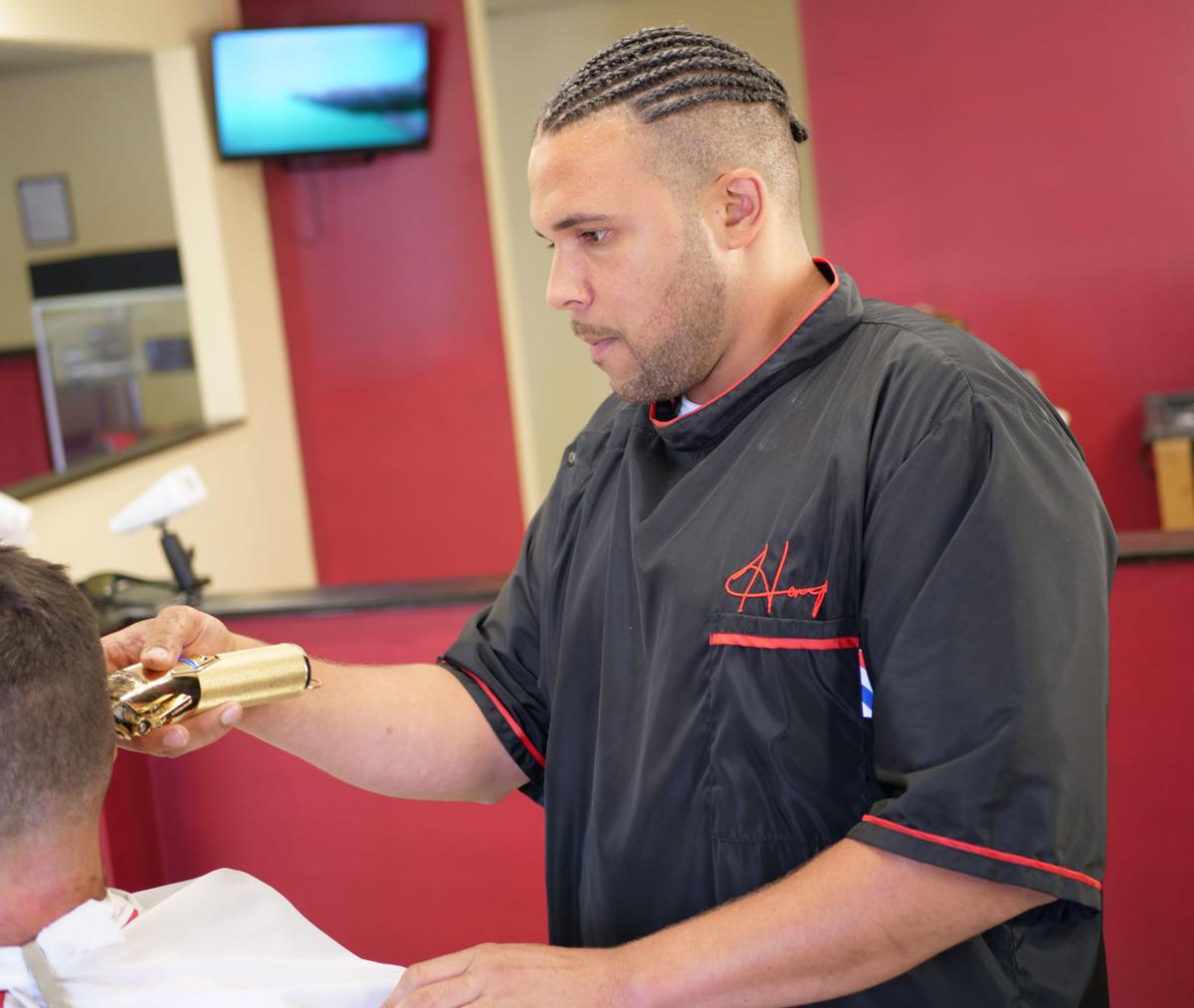 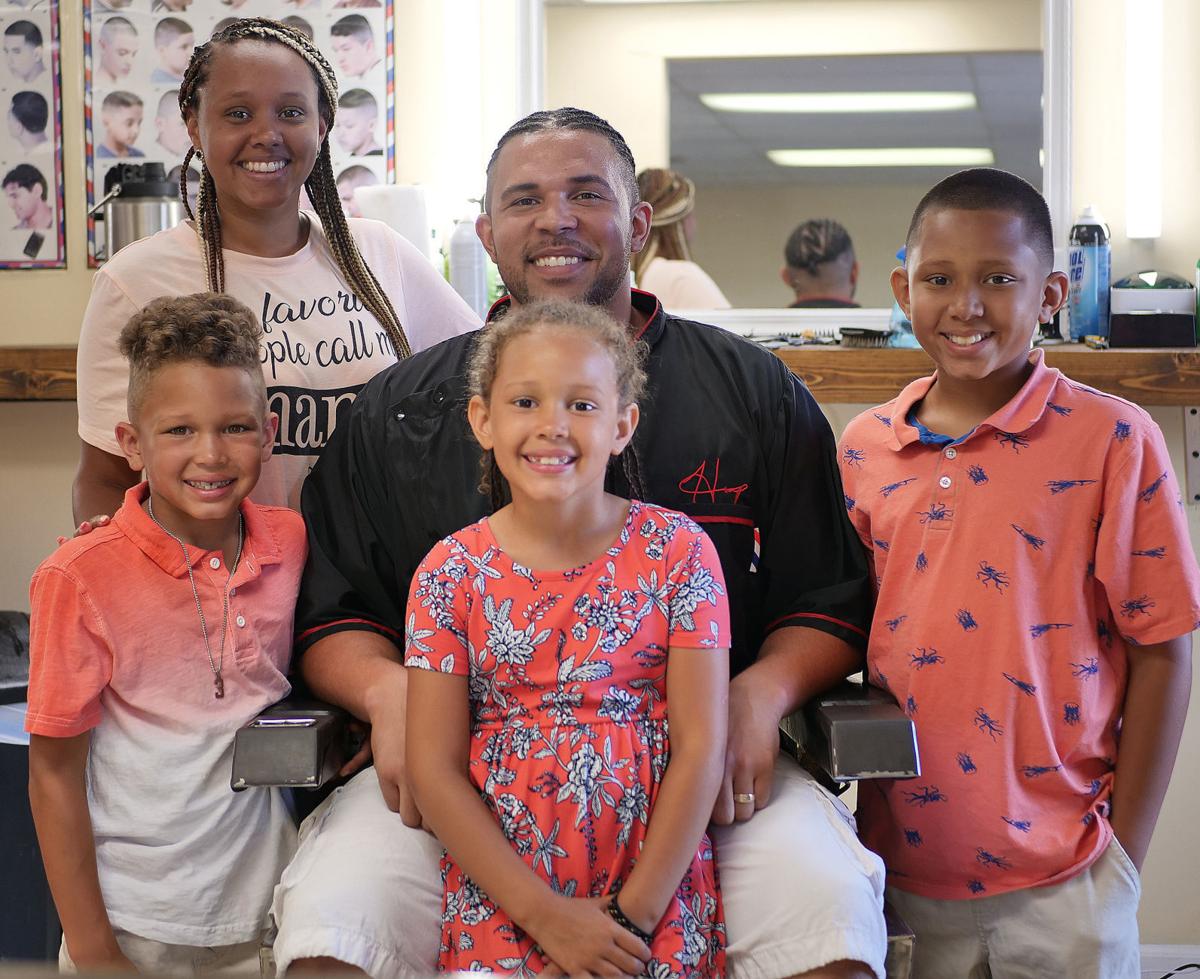 Daniel Hampton is happily married to Temeka and has three children, from left, Daylen, Kyla and Danarius.

Daniel Hampton’s life was changed nine years ago after spending six months in jail. He is now married, has three children and owns Hamp’s True Definition Barbershop in downtown Loudon.

Daniel Hampton is happily married to Temeka and has three children, from left, Daylen, Kyla and Danarius.

Daniel Hampton found himself alone behind bars, sitting on a cold, ragged cot in the Blount County Justice Center and wondering where he had gone wrong in his life.

Hampton, a 2007 Loudon High School graduate, was accused in 2010 of dealing cocaine at a residence in Loudon. He was put on probation but eventually broke the deal halfway through his sentence due to another encounter with illegal drugs.

He was sentenced to 180 days in jail — an experience he now looks back on as a “life saver.”

“I got twisted up and thought I could sell drugs or whatever, and they caught me. It kind of makes you backpedal,” he said. “After that point, luckily after I had got in trouble, you reap what you sow. I had to do six months in jail, and my little boy is what changed me. He had just been born, and I had seen him walk through the visitation glass. I told my wife, ‘I’m not going to change,’ but the way God works, I got out.”

Hampton grew up in Loudon under the care of good grandparents who shared a solid faith in the Lord.

“I live right here and was down here every day, and there’s no place like home. I love the small-town aspect,” he said. “My daddy wasn’t really there, my grandparents raised me, my mom was in and out. It wasn’t rough as far as when I was going through it, but now I’m like, ‘Dang, that was rough.’ I remember a lot of things that weren’t right, and I feel like I become a product of my environment.”

He gradually began to go down the wrong path as he got older.

“It didn’t have anything to do with my grandparents raising me because I have the best grandparents in the world,” he said. “It was rough on them because I’m the first biracial kid in their family, and all of this kind plays into effect because they kind of get shunned from their family. It was me and my brother, we stayed with grandmom — she’s divorced, living by herself, single. She did everything for us, and they taught us right from wrong. But still, it’s the people you hang out with. I feel like the picture that was painted for me and what I believed, I mean there was no question I wasn’t going to college. Whatever was going on in my mind was the fact that I was pretty much ruined.”

ing into troubleHampton eventually got involved in local drug deals and began to question everything in his life.

“I was constantly doing wrong, but I still looked good on this side. I’d go make my little money or whatever, and there’s no excuse for why I did it — I was surrounded by it,” he said. “Come to find out, people that you hold to a higher standard that’s in the church. I was seeing people from the church get drugs from my cousins and them. I was the good kid. I was like the last one in my family to get involved in it, and I just felt like I had it figured out at that point. It got to the point where I quit going to church because it was like, ‘Man, these aren’t no members, these are people that’s doing programs and stuff.’ It just really made me stray away from my faith, and I clung to another type of faith.”

“Barbering was going to be my cousin’s thing, but then he got locked up. Really, I was just sitting and trying to think, ‘Why did I do this?’” he said. “You had to have 1,500 hours, and I was just going to buy time. Whether I really thought if I was going to finish barber school on time, I don’t know. I was going at 2 p.m., coming back in the neighborhood and doing my thing or whatever. It took me from 2007 to December of 2009 to graduate from barber school, and it shouldn’t happen like that. I got kicked out a few times, and I had to beg to get back in.”

In 2010, Hampton received a sealed indictment for selling cocaine and was sentenced to probation.

Halfway through his sentence, Hampton was allowed to travel outside the county for a weeklong vacation. However, he failed a drug test upon returning and was sentenced to six months in jail in November 2010.

“I go back to Loudon and I had to sit in the county for three months, and I kind of talked a little crazy to a couple of officers and they kind of blackballed me, and so I did my next 90 days in Blount County,” Hampton said. “We get over there, and it’s kind of rough over there. There ain’t no relaxing. You’ve got to come out of your cell three or four times a day. There ain’t no sleeping.”

While incarcerated in Blount County, reality hit hard when he noticed the man in the adjacent cell was someone he knew.

“Believe it or not the man that we used to dirt with, I wake up and this is the man that I’ve been doing any kind of my wrong business with,” Hampton said. “I was like, ‘Wow, this is the guy doing 20 to life.’ At that point, I think that’s when my life really changed all the way. I wanted to be like him. That’s how God works. There’s so many pods and so many cells, and they put me next door to this man that I wanted to be like. I was like, ‘You can’t win’.”

cond chanceWhile Hampton served time, he began to turn his life around and recognize what was important, including as his wife Temeka and oldest son Danarius.

“I done told her to leave, but the officers would come tell me, ‘Look, you need to call that girl. She loves you,’ but I was like, ‘I’m not changing’,” Hampton said. “But man, she never missed a visit. She missed one visit because she was at work. Even when I went over to Blount County, she never missed a visit and put money on the phone. I had a baby out there and she’s juggling the baby and still going to work, and man, I couldn’t ask for a better wife.”

Serving time was difficult on the family.

“I grew up in a family where my dad was into drugs, and I had told him that I never wanted to bring our kid up into it, but it was fast and easy money for him so he continued to do it,” Temeka said. “Danarius was probably 6 or 7 months old when we went to jail, and it was the hardest time I’ve ever been through.”

Hampton remembers nothing but excitement when he was released in May 2011. He also began to pursue his relationship with God again.

“When I got out, just to be out and knowing what I really could’ve faced, there ain’t no telling what they gave those guys,” he said. “As a human, I guess everyone feels like, ‘Poor ole me.’ You’ve got to look at the brighter side of things. I was really in the church at that point, and you’ve got people to lean on. It’s the same people that knew what I was doing when I was doing wrong.”

Loudon Police Sgt. Scott Newman served as Hampton’s school resource officer at LHS and has known him most of his life.

“He had a little rough road starting out, and he’s like a lot of young men that make some bad decisions, but he saw the errors of his ways and he changed,” Newman said.

Hampton returned to Loudon and started Hamp’s True Definition Barbershop in 2012 on Grove Street before relocating to Mulberry Street.

“I used to mess my own hair up and got tired of going to the barbershop around here,” he said. “There’s no barbershop to get like shaved or fades. I never really practiced on anybody ... but I’m artistic. My granddaddy was like, ‘What are you going to do?’ So I just jumped.”

Newman, Loudon County Mayor Rollen “Buddy” Bradshaw and others are now regular customers and enjoy stopping by any chance they get.

“His barbershop represents a lot of the younger youth that come in there and will hang out and tell stories of old football days and stuff like that,” Newman said. “It’s a good, family based barbershop. He’s a great family man, a good business man here in town. You’re always welcome there no matter who you are.”

Hamp’s is also a place for discussion between all walks of life.

“He cuts several of the police officers’ hair, and you’ll see anybody from an 80-year-old black man to an 80-year-old white man in there getting a haircut,” Newman said. “Everybody’s welcome, and we all have good conversations. Really, I’d say if you had Daniel’s barbershop open and the people out here that are making decisions in life were able to come in and discuss those decisions, they’d probably come out with a lot better answers. I think he does a good job of doing that.”

Hampton’s main desire is to be a light in the community.

“What’s so special in here, I can get a white cop from the country to sit in here amongst, you know, this guy might be a gangster, this guy might be Hispanic and there’s different walks of life in here,” Hampton said. “That’s what we do. I’ve done a lot as far as relations between races just even right here. All of that stuff starts in a small little place, little conversations — that’s how you hit racial relations.”

Hampton has come far in the past decade. He is now happily married, has three children, operates a barbershop and never takes a moment for granted.

“We’re blessed, not rich, but we’re blessed,” he said. “Really, that’s just the gist of it. I turned something out of nothing when I had the opportunity to, and I jumped.”