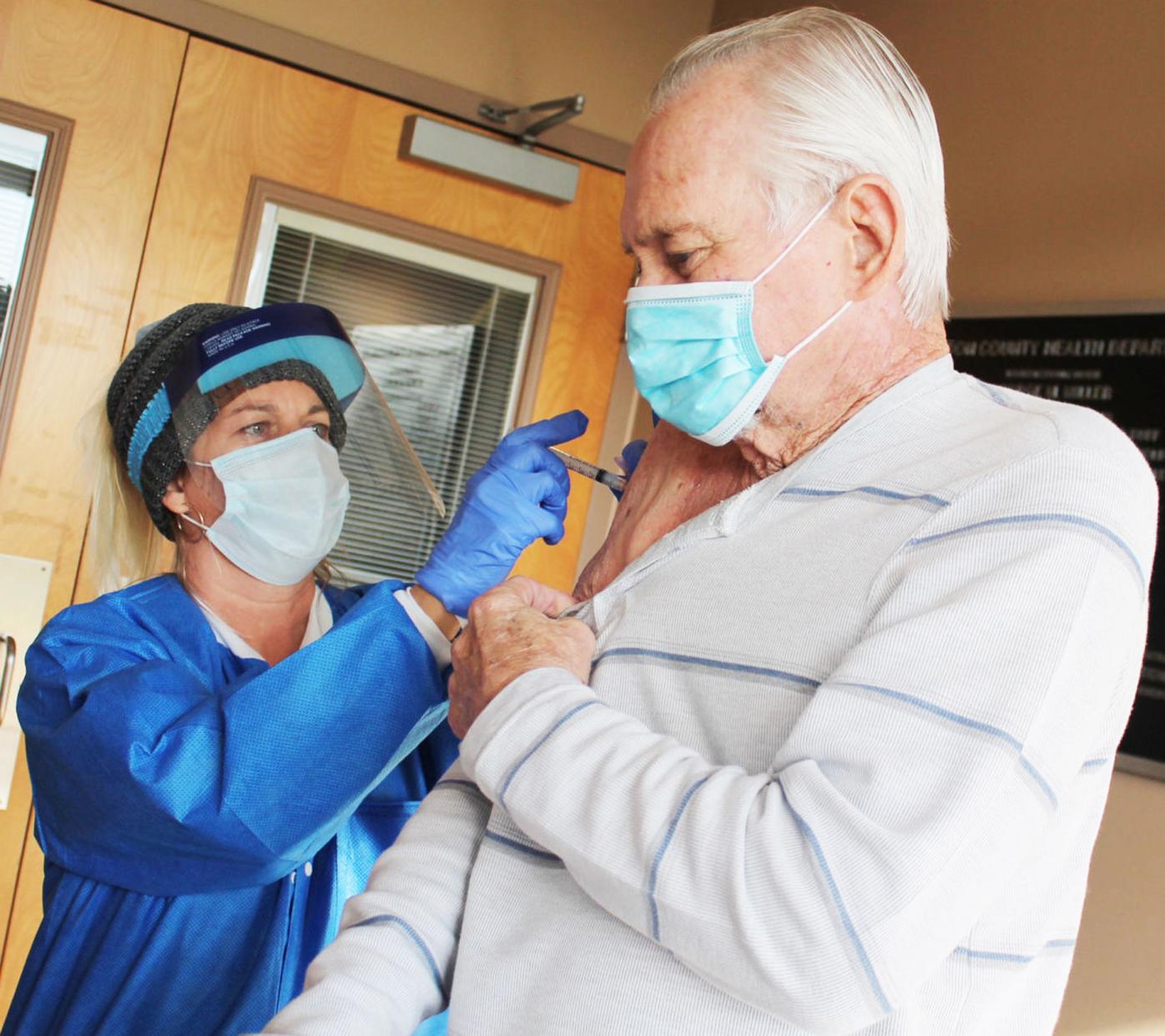 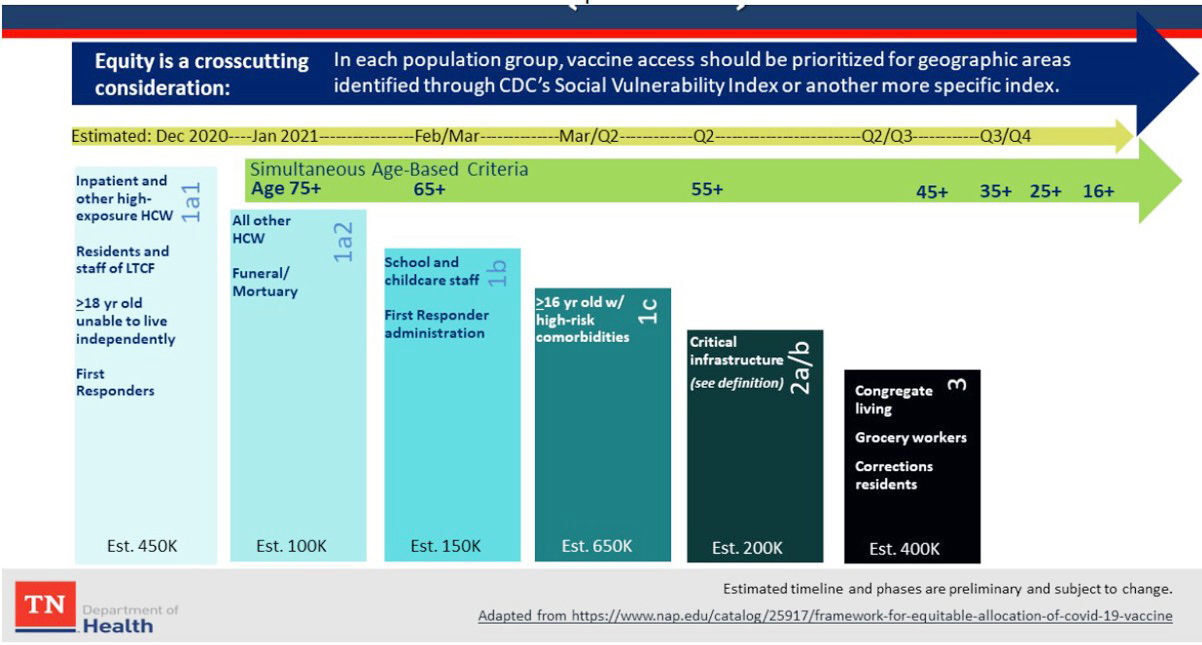 The vaccination plan from the Tennessee Department of Health.

The vaccination plan from the Tennessee Department of Health.

Loudon County Health Department is asking for patience as representatives work through a vaccine distribution plan projected to last through the year.

According to a Vaccine Allocation Phase chart from the Tennessee Department of Health, vaccinations will go through the fourth quarter.

Phases 1a1 and 1a2 include first responders, residents and staff at long-term care facilities, 18-year-olds who cannot live independently, funeral/mortuary workers and people over age 75. Estimated timeline and phases are subject to change, according to the state

“Right now we are doing 1a2, outpatient health care workers, mortuary (workers) we’ve done them and now we’re in part of 1a2 is 75 and older, so we’re in 1a2,” Teresa Harrill, county health department director, said Jan. 6. “We have been told we need to do as many as we can — everybody 75 and older that wants a vaccine we need to vaccinate them. Now the problem is the process of getting, and I know people have been complaining, people have been calling — we’re doing the best we can.

A new SignUpGenius program should now be in use, replacing Eventbrite.

Appointments can be made at https://www.signupgenius.com/go/loudon-priority-list. A notification will be sent to the person on the waiting list when they can be vaccinated. Harrill said they will then need to come back in 28 days for the second shot.

The health department received the first shipment of 600 Moderna vaccine vials Dec. 21. Harrill said those have been used to vaccinate 1,181 people.

“From what we understand, Tennessee hasn’t got as many doses as they thought they would,” Harrill said. “A lot of the doses that probably would be coming to us more in more quantity is probably going to the nursing homes, which that’s a good thing. We’re just kind of wait and see whenever we get another shipment in.”

Jan. 2 was the department’s first big community push when 448 people were vaccinated.

“The big thing Saturday was our first big community (push), and that was for 75 and older, health care and 75 and older,” Harrill said. “The problem with that when people show up and they don’t have an appointment, if we know we’ve got — like yesterday, Judy said we have 260 doses and there was 260 people on the list. If somebody had another person in their car that went, ‘Well, I brought them along,’ you’re not getting it because you weren’t on the list.”

Hopes are to give vaccines off site in the future due to high traffic, but a location has not been announced.

“We’re going to take it off site so that we don’t have people parked (down the road),” Hurst said. “I’m sure that we did disrupt a lot of traffic flow, and I know that we disrupt a lot of stuff when we’re here but, one, we know what works now. The paperwork takes the most time. We need to get more people out to do paperwork, that’s it, and advise people. ... For the second one it shouldn’t be so hard because, again, all we have to do is make sure everything’s the same and just get the shot.”

The plan is for vaccinations Monday, Wednesday and Friday, while Tuesday and Thursday will be for testing at 1:30 p.m., Harrill said.

“I promise them that as soon as they give us vaccine, I promise that it’ll be available to them,” Hurst said. “That has been throughout. The first day that we got it, we had long enough to process it, to catalog it, get it into the system so that we could start dispersing it and it went into arms. That’s what the governor has wanted and that’s what — everybody wants them to get into arms, and it’s patience. I really want us to get the vaccine, and we will get it in arms as soon as we possibly can.”

“I’ve been detected for the COVID once,” he said.

“But he didn’t have symptoms,” Jane McNabb, Harold’s wife, added. “He’s fighting cancer so he needs everything he can to help.”