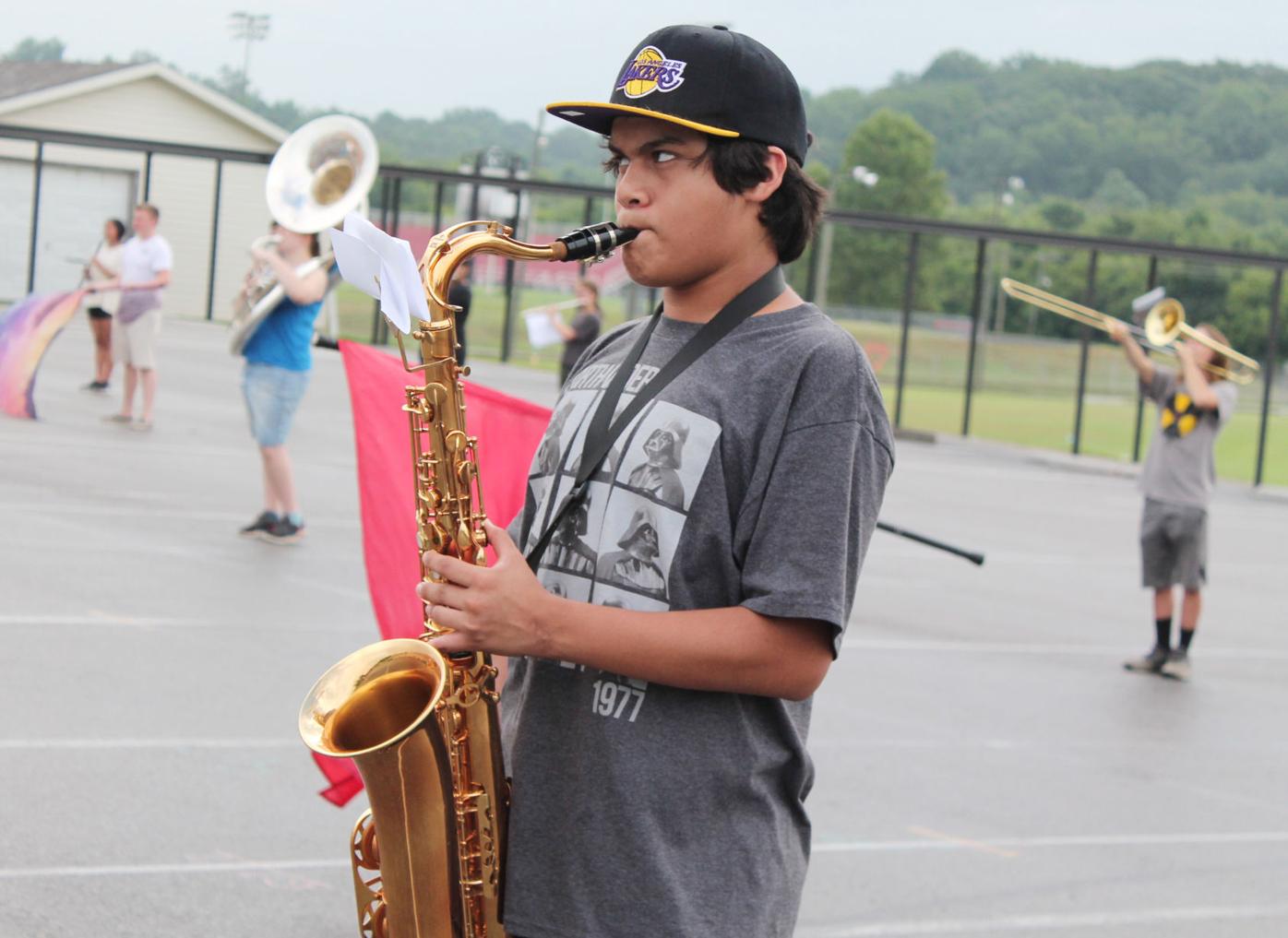 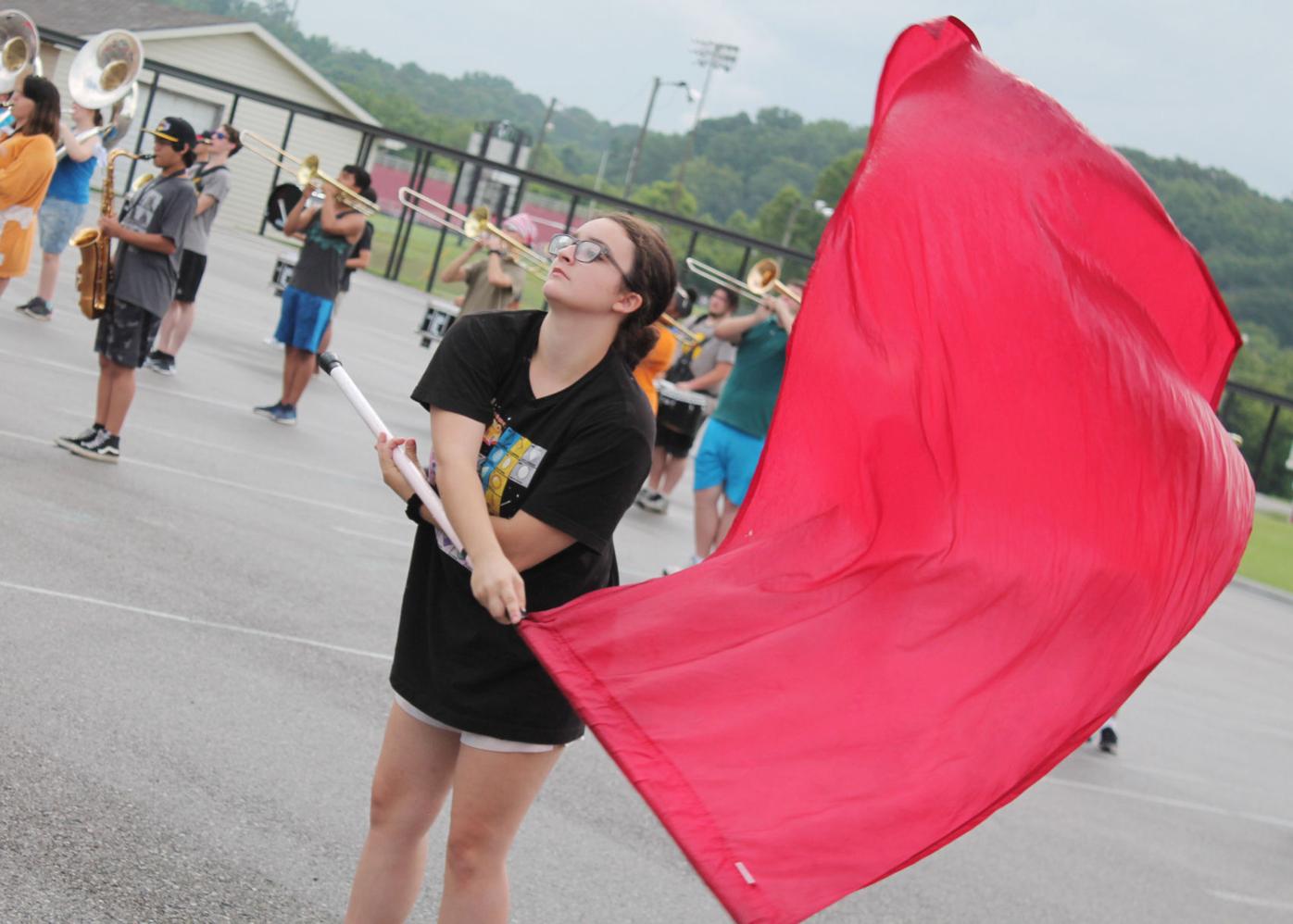 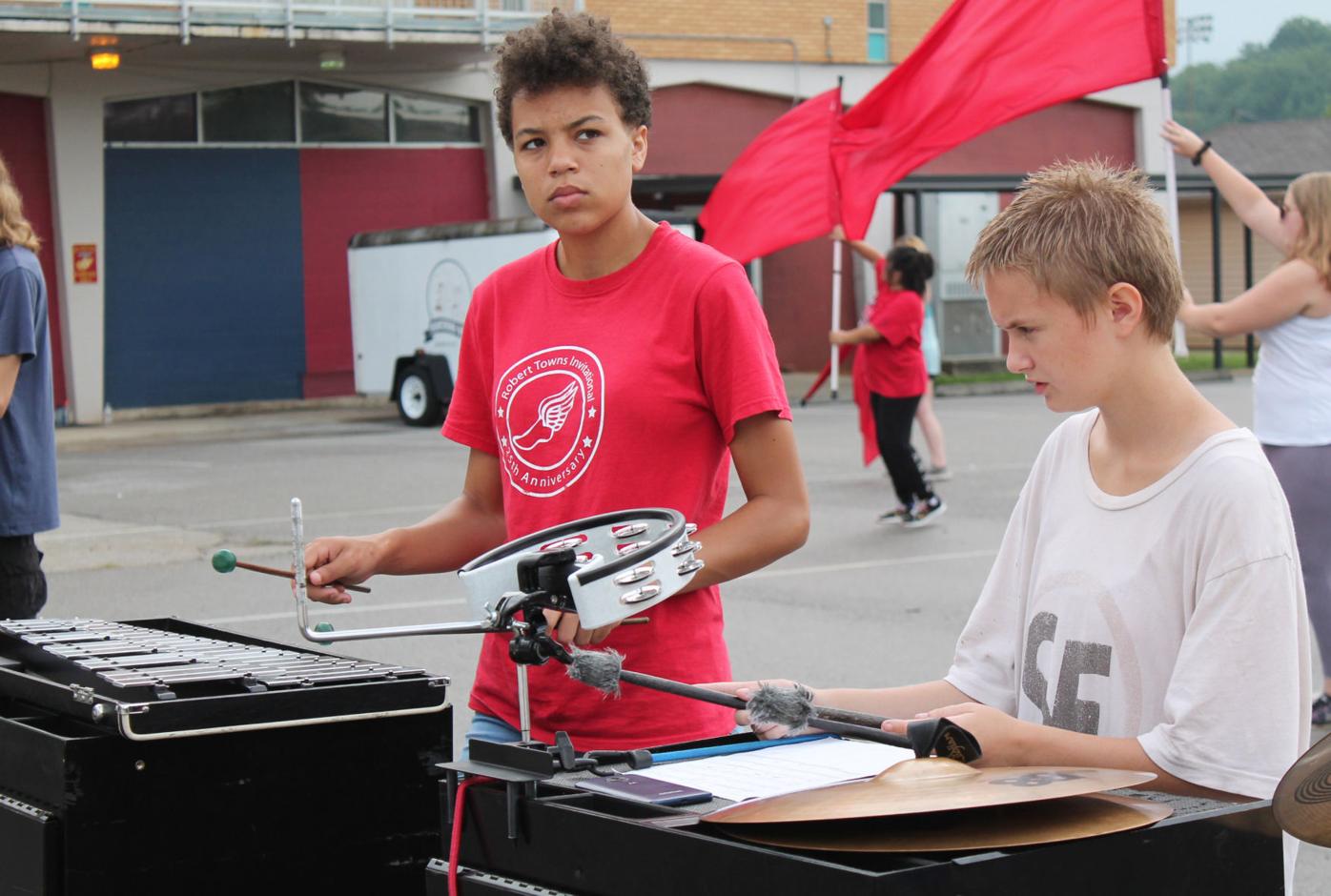 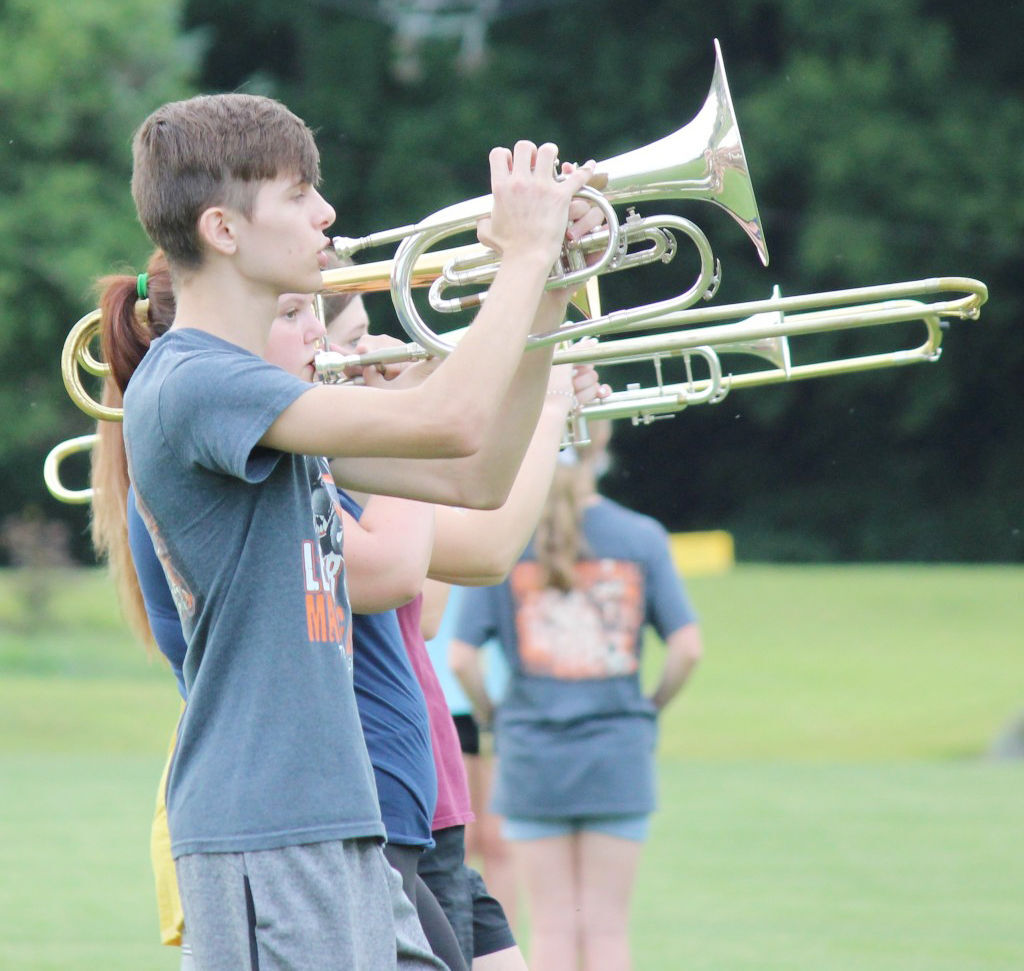 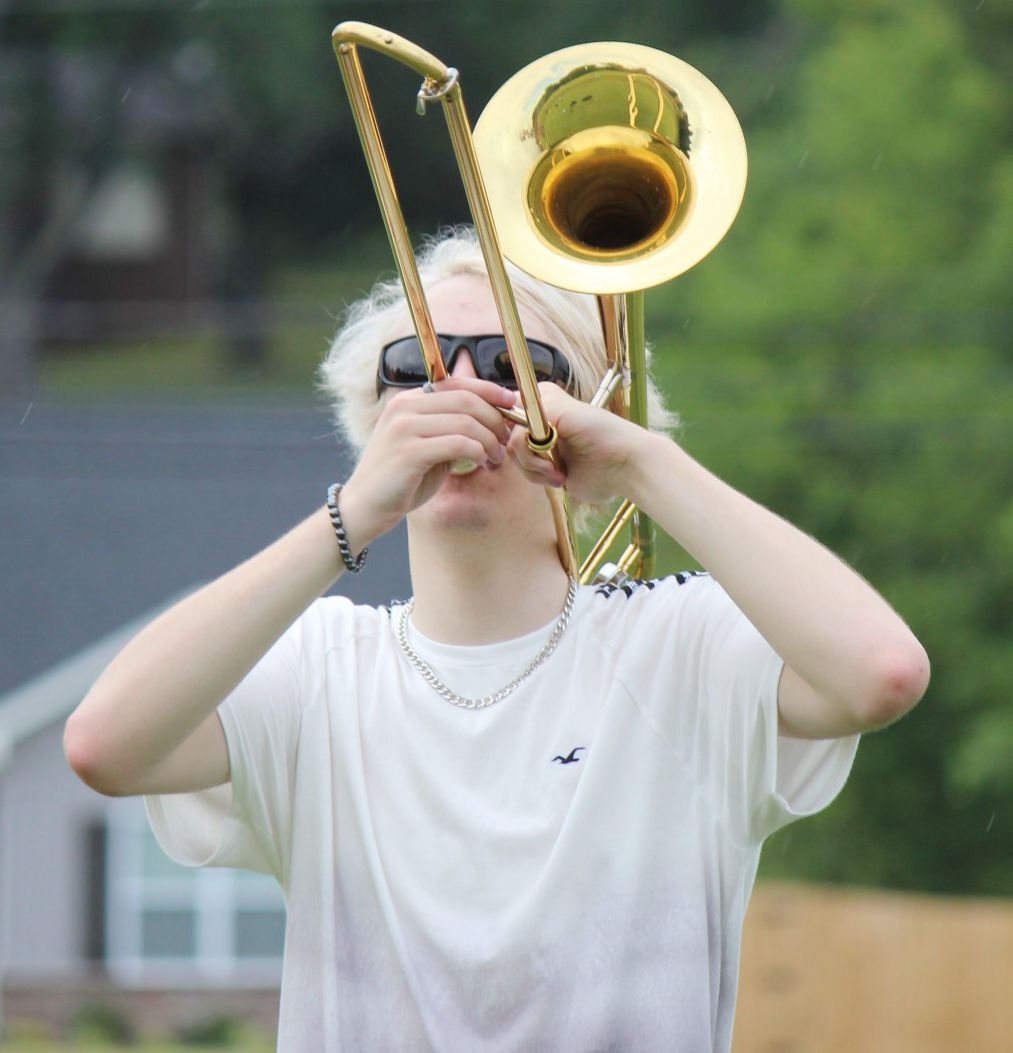 Loudon High School band students battled the heat and kept at a distance to prepare for the coming year.

“... We keep social distancing on the breaks and then the recommendation is a four step in marching band language,” she added. “That’s over 6 feet in metrics.”

With COVID-19 prevalent, Conway wanted to break the performances into three segments. Hopes are for each segment to sound well alone and when combined.

“If we had a game at any point now we could play this segment and we would have a show of some fashion,” Conway said. “As the season progresses, if we are able to, we will keep adding segments. So I really compartmentalized how we’re going to do it and I can start and stop the show at any point so if we get called out of school for sickness, I don’t have to worry about, ‘I won’t get the rest on.’ I can play the segments that we have.”

Other segments include a small-town segment with “Small Town” and “Jack and Diane” by John Mellencamp and a final segment “Home” by Phillip Phillips.

The idea is for all three to be based around their hometown, Conway said.

“With everything that’s happened in our community with the coronavirus, I decided instead of doing a typical competitive band show, I decided to do a hometown show,” Conway said. “Each week we are going to honor specific groups of hometown heroes, and I’ve written it into the show where whichever groups we decide, which I’m not telling right now, are going to be able to run through to the fight song just like the football team runs out at the beginning of the game.

“Just to kind of give a little respect to all of the extra work that people did over the span of the quarantine and just to kind of bring a little more spirit to our town, because it’s been such a hard time for everybody,” she added.

She hopes to focus first on cafeteria workers, bus drivers and volunteers responsible for delivering food to children over the break.

“Our band director, Jennifer Conway, along with assistant director of bands, Lisa Michaels, have worked so hard to get the students ready while demanding appropriate safety measures were in place for camp,” Scott MacKintosh, LHS principal, said in an email correspondence. “I can’t express how proud I am of those ladies and all who work with the band. ... Our band and its directors remain very flexible and that is what is important to show students. The ability to try and foresee several scenarios and have a plan ready to deploy when things change.”

Band camp serves multiple roles and helps lay the foundation for the year.

“They haven’t seen each other in a long time, so it’s been at least starting to make it feel more normal again,” Conway said. “I think that will be good for them as we start the school year. They’ll have already been here and have had some of the protocols so that the starting of the school in a pandemic won’t feel so daunting for them.”

For senior drum majors Jacob May and Adele Lee, camp made a difference.

“It’s really important for me to be able to do it, especially during this time because it kind of gives us a sense of normalcy,” May said. “It kind of gives us a feeling that even though we are faced with regulations, this band is still family and we can still function like a family.”

“We just make it a flexible show that we play it when we are able to and when we can practice,” Lee added. “It’s not that difficult. It’s not that challenging to be able to change.”

Both said the camp was a good way to bond with peers.

“It’s given us new ways to meet everyone and get to know everyone,” May said. “Like instead of getting in a group and playing a game, we can be 6 feet apart and just talk.”

“Because of COVID, this year has been quite different,” Huff said in an email correspondence. “We decided to shorten the overall time spent in camp this year as compared to previous years. In previous years we would rehearse about 70 hours in a two-week time period. This year we will spend less than 30 hours together rehearsing during camp. We are also taking temperatures every day when students and staff enter the building and social distancing whenever possible. When we cannot social distance we are requiring students and staff to wear masks.”

Huff said students and staff adapted to have fun during camp.

“With all the uncertainty over the football season and what the fall semester will look like we have decided to do a fun halftime show and really work on the fundamentals of music this year,” Huff said. “We’ve entitled our show ‘Reboot’ and it includes music from Pentatonix, Journey and Elton John. We plan to play all three songs together as a halftime show performance, but depending on how the fall semester progresses we realize that could change at any time.”

“This band camp has been so different because we have had to change many things from previous years, but everyone has adapted well and we are looking forward to performing this year,” Moss said.