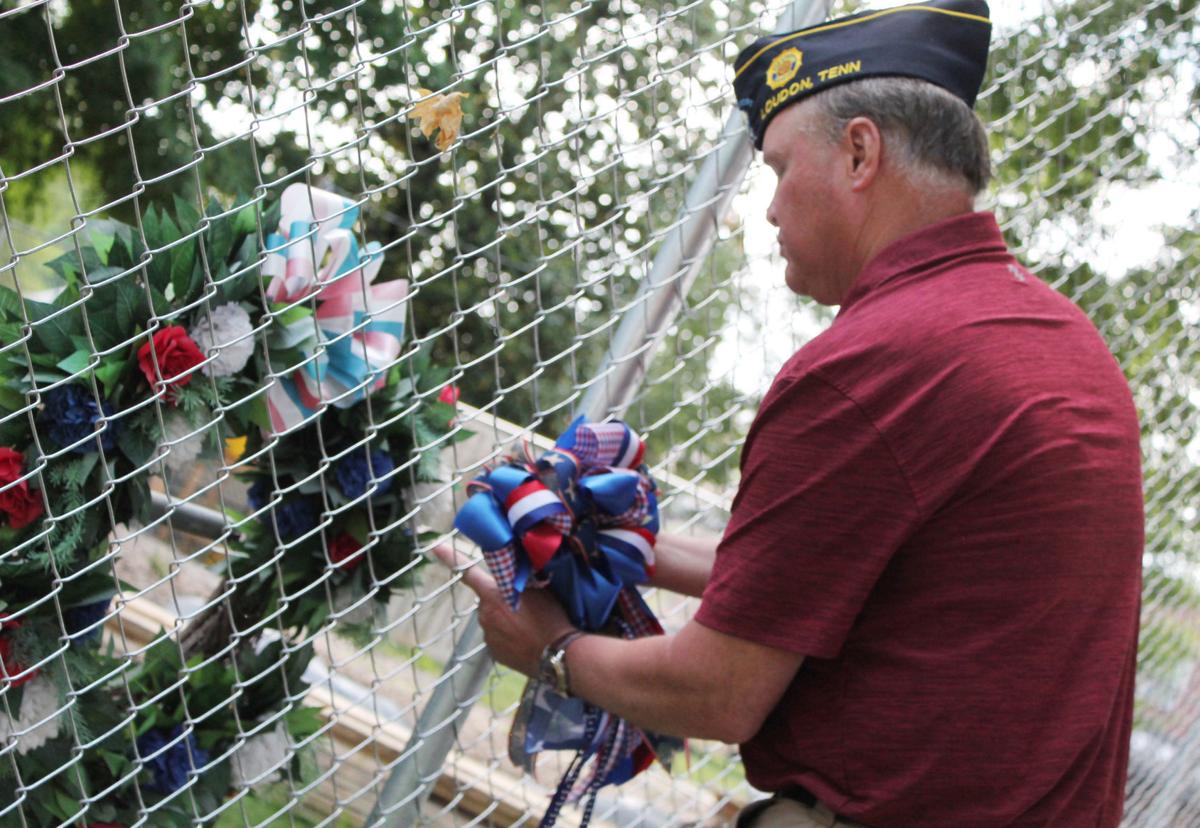 Loudon County Veterans Service Officer Alvin Wagner, who is a member of American Legion Post 120, places a ribbon on the fence in front of the Loudon County Courthouse. 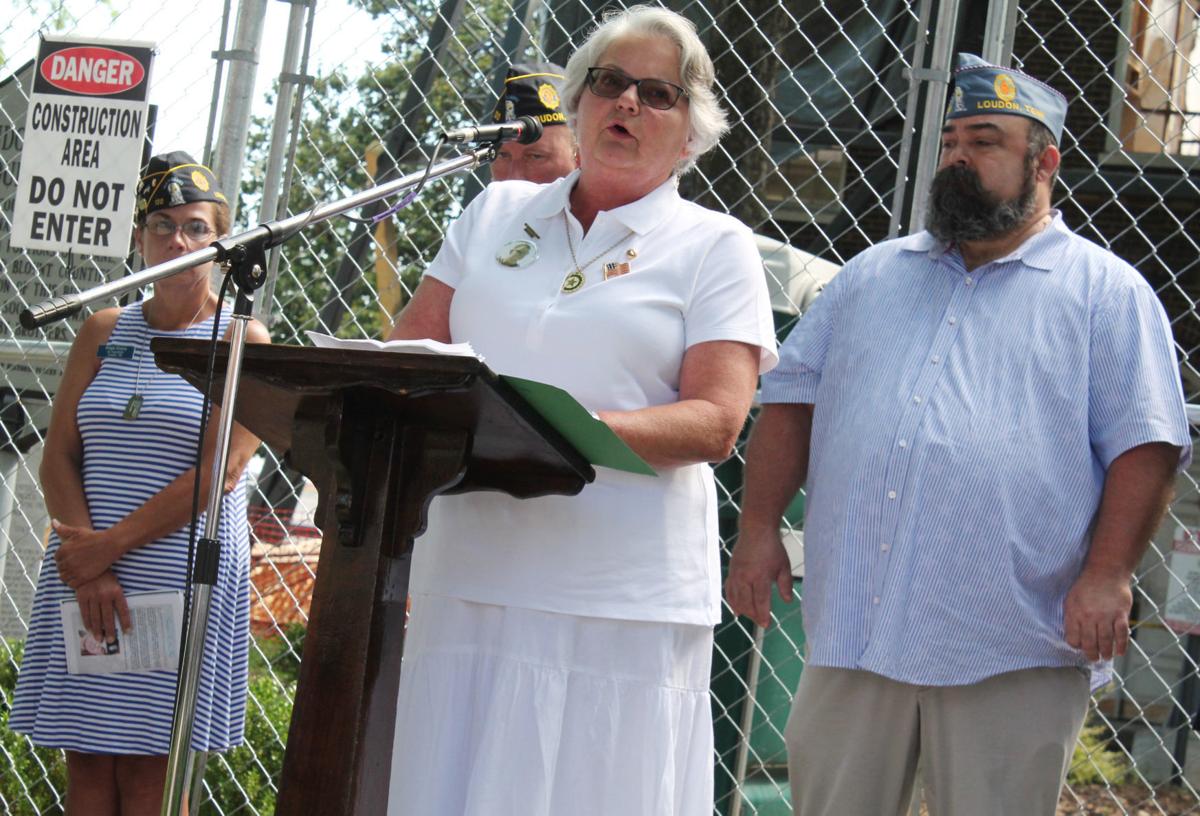 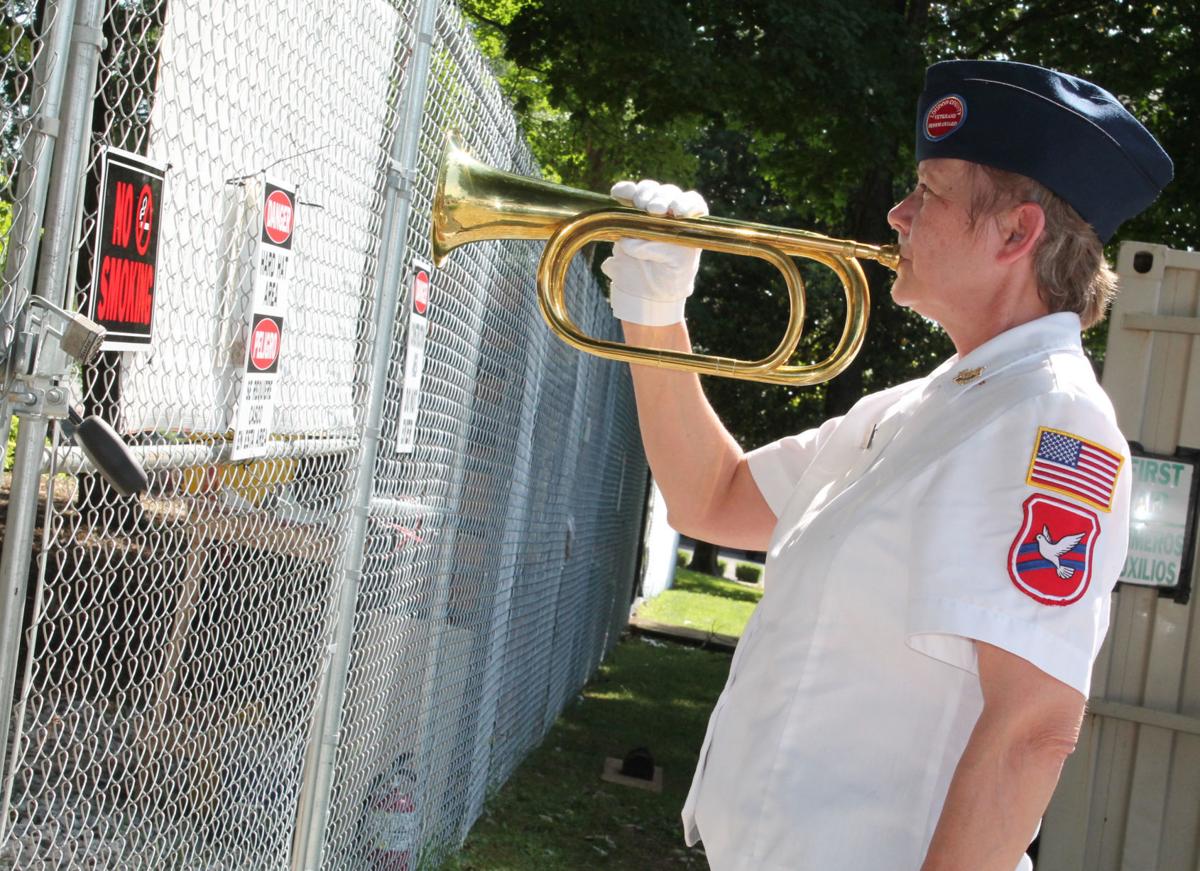 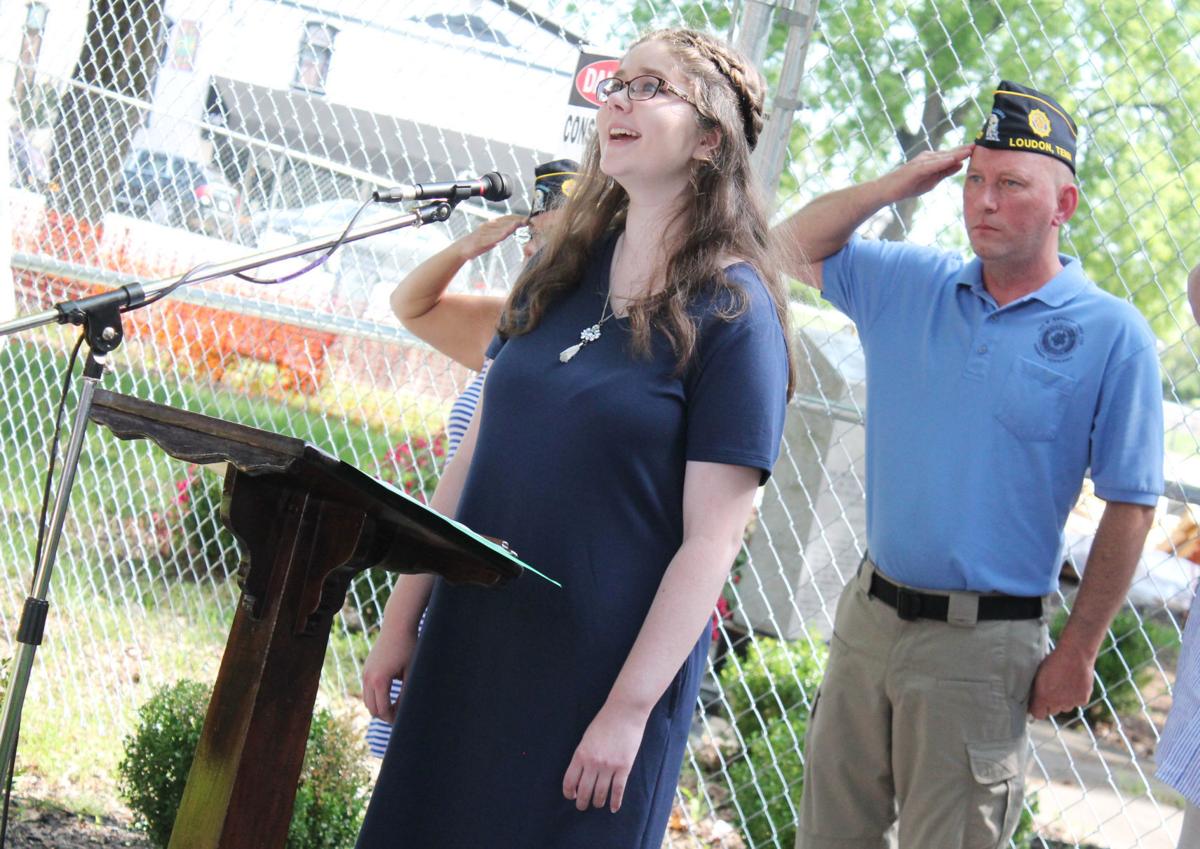 Loudon County Veterans Service Officer Alvin Wagner, who is a member of American Legion Post 120, places a ribbon on the fence in front of the Loudon County Courthouse.

Standing in front of a Loudon County Courthouse still under repair from last year’s fire, American Legion Post 120 members and others from the community Monday honored those who lost their lives in service to their country.

The 10 a.m. Memorial Day service was slightly different than years past due to the COVID-19 pandemic. There was no Loudon County Honor Guard firing squad, Loudon High School band or LHS Junior Reserve Officers’ Training Corps, who normally place wreathes in front of the courthouse.

The changes didn’t stop a crowd of about 60 from paying their respects.

“I got here and I read every one of these names,” Alvin Wagner, Loudon County veterans service officer, said of the banners showing fallen soldiers. “I’m only here because of what these people sacrificed. We need to make sure everybody understands that, that personal sacrifice. ... We’re trying to what’s important in our lives right now and that’s really what COVID has defined — family, friends, patriotism — we’re always going to have that. The damned disease isn’t going to take it away from us.

“That’s what we really have to understand regardless of what this thing is doing, and that’s what great about this area, people still come together,” he added. “We talked about this. This was a decision the American Legion made as a group.”

Bobby Watts, American Legion Post 120 commander, said he wanted to pay tribute to fallen veterans despite changes to the service.

“The meaning is still here though,” Watts said. “We still have the meaning that we’re going to have this. It’s true as it ever was. ... We have a choice to be here today. All those veterans that have died, they didn’t have a choice.”

“Ladies and gentlemen, this year in 2020 we’ve already lost four servicemen in the performance of their military duties and gained four Gold Star families,” Russell said. “Today as we observe Memorial Day and remember the brave men and women that lost their lives so we could enjoy the freedoms that we do, I think it’s equally important to reach out to Gold Star families and let them know that we remember them every day of the year because that’s (what) Memorial Day is for them. When they wake up each and every day and that loved one is not there and they’re at the dinner table for birthdays or holidays, it’s Memorial Day for them each and every day of the year.”

Guest speaker was county resident and Gold Star mother Marsha Hunt. On Aug. 22, 2005, just months before his tour was over, Joseph “Joey” Daniel Hunt died at 27 years old after an improvised explosive device detonated near his Humvee during patrol operations in Samarra, Iraq.

Hunt emphasized never forgetting those who lost their lives serving their country.

“That has been the goal of every Gold Star mother I have met in the last 14 years,” Hunt said. “American Gold Star Mothers is a nationally recognized organization of mothers of fallen soldiers, sons and daughters who died in the war. We grieve together and we remember them together and we support each other during the difficult times. The first mothers I ever met were from the Vietnam War era who lost their sons, Ms. Iris Walden and Ms. Sarah Crabtree. ... The one thing they taught me that has stuck with me the most is being told, ‘Losing your child is something you will never get over, but it is something you will learn to live with’.”

Hunt said Joey was “a good kid, a rowdy brother, good father” who loved his family and country.

“To lose your child to war so far from home and family is a hard thing to learn to live with and I hope you don’t ever have to experience it,” Hunt said. “Today I hope you enjoy your time off from work and I hope you celebrate with a cookout because that is most definitely the most favorite thing that Joey ever loved to do was gather with family and have cookouts. I want you to take some time today to remember the men and women who died. They gave their tomorrows for your todays. Say their name, say it loud and proud, and don’t ever forget that’s the least we can do.”