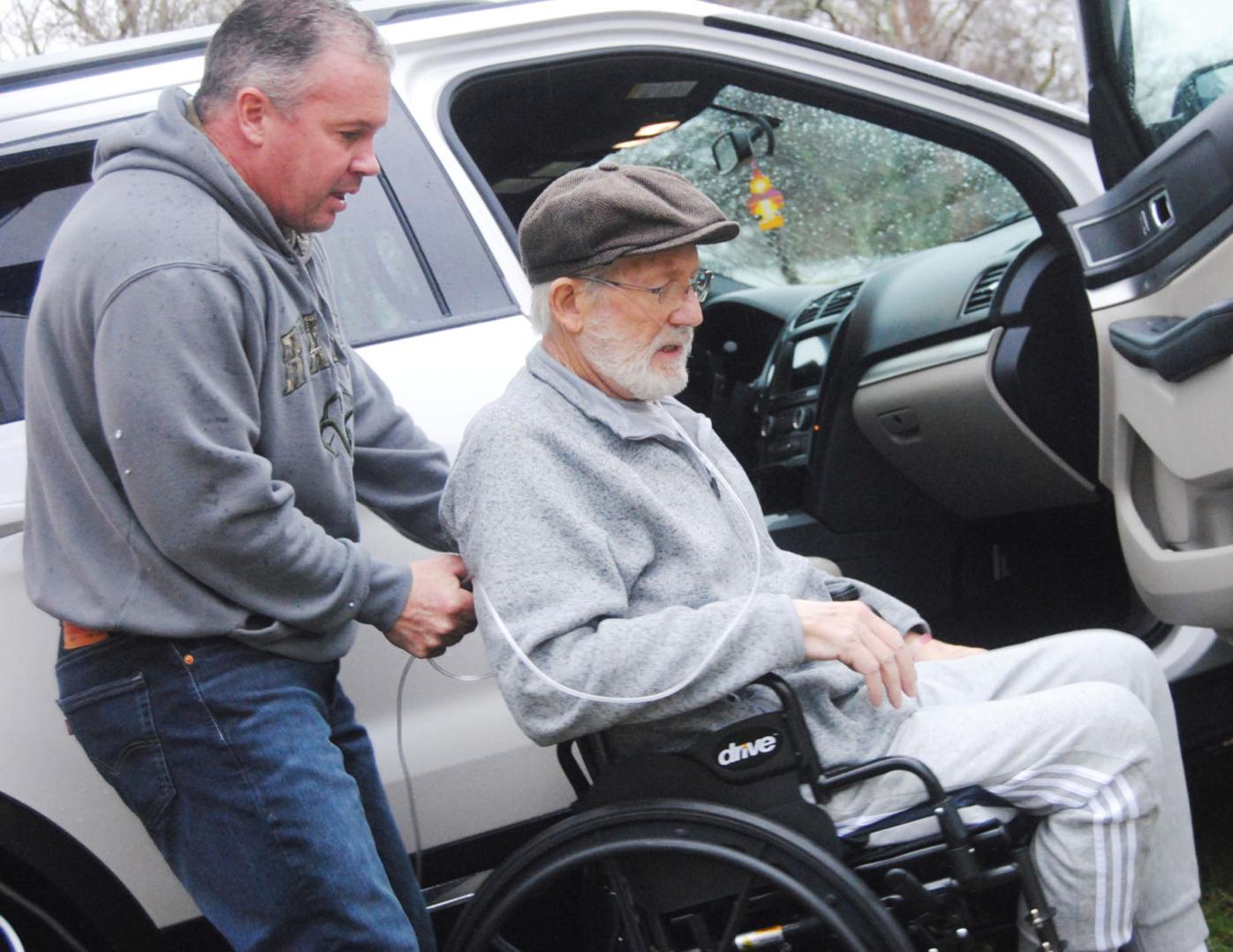 Travis McGinnis, left, helps Danny Hickman, his stepfather, get out of the vehicle Christmas Eve after coming home from the hospital. 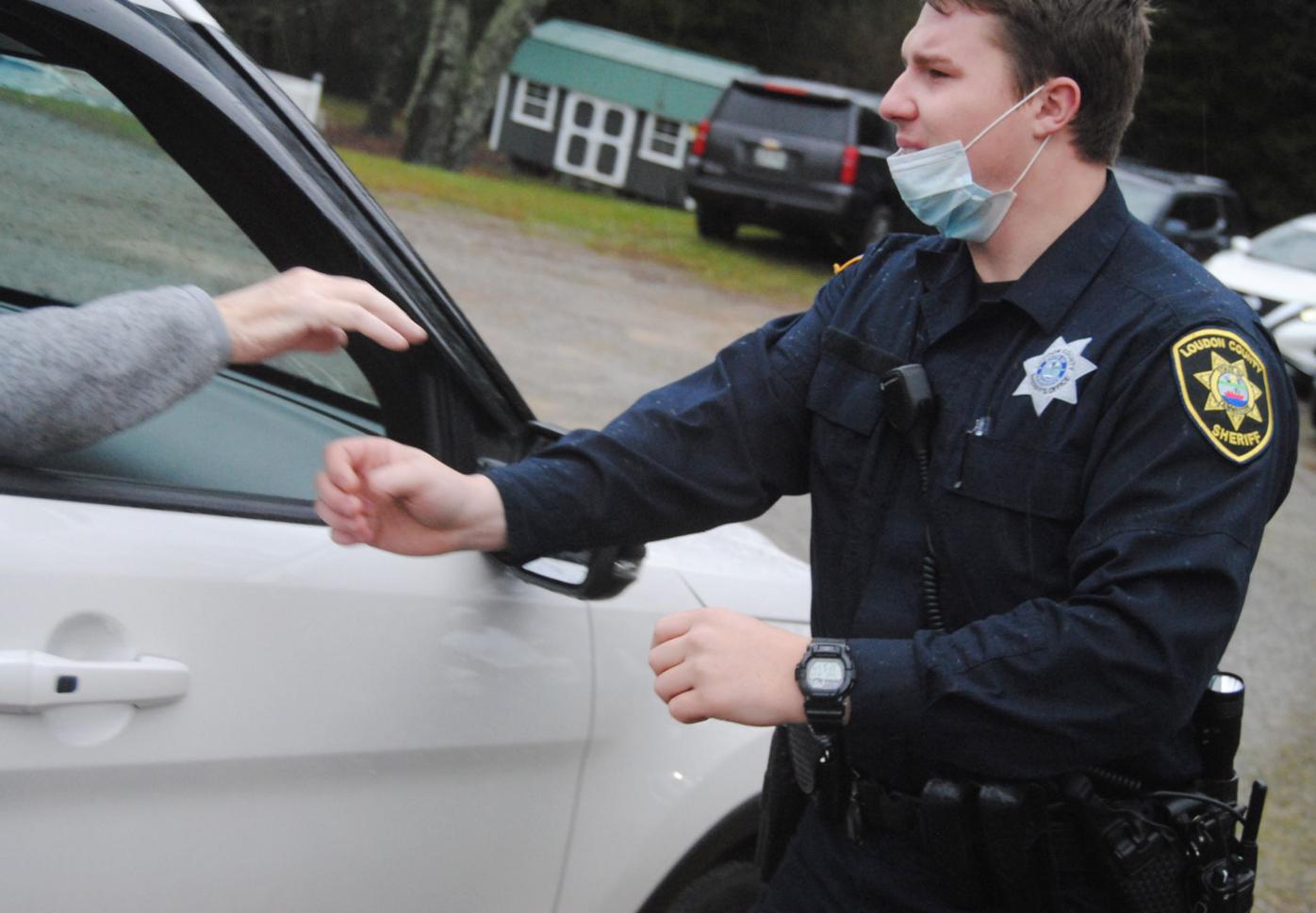 Skyler McGinnis, with tears in his eyes, rushes to give a hug to his grandfather, Danny Hickman, who spent three months in the hospital recovering from COVID-19.

Travis McGinnis, left, helps Danny Hickman, his stepfather, get out of the vehicle Christmas Eve after coming home from the hospital.

Skyler McGinnis, with tears in his eyes, rushes to give a hug to his grandfather, Danny Hickman, who spent three months in the hospital recovering from COVID-19.

A Loudon County family directly affected by COVID-19 got a joyous Christmas gift.

Danny Hickman, 65, was welcomed home by jubilant family Christmas Eve after a three-month battle in the hospital.

His journey started in late September after testing positive for the virus.

“I was just coughing and had symptoms of a headache and chilling and thought, ‘Well, I ought to get it checked out’,” Hickman said. “I wasn’t really feeling real terrible but just bad enough to maybe get it looked at. When we went down (to the hospital), almost immediately just had trouble breathing and stuff.”

“There were lots of times when I guess when I was having trouble breathing that it was to the end of life,” Hickman said. “The difficulty in breathing was just unbearable, and didn’t think that I was going to make it through several times. Of course, when you did get a little bit of relief in breathing you were in quarantine for — I was for 30 days and the time there that you had a lot of time to think. It wasn’t the big light that you see at the end of the tunnel or anything like that. I mean you do have a flash of the people that you love that passes in front of you that you’re never going to get to be with again.

“… It’s just a struggle. It’s just unreal,” he added. “You come to a point where you might even ask to go ahead and die instead of the struggling, but it’s a terrible stress. I don’t know, it’s just really scary.”

“I would hate to wish it on anyone. ... It’s the most terrible thing you can go through, and it is out there, and no one knows that you have it,” Debbie Hickman, Danny’s wife, said. “He almost passed twice, and he was a very healthy man when he went into the hospital and he lost about 75 pounds. He was at 225 starting out.”

About 60 days of his hospital stay were in intensive care.

“Him being up there in ICU and when you can’t see your loved one or really know what’s going on or anything, yeah ... it’s really hard,” Debbie said. “... From the time he got moved out of ICU, I guess they let me visit him about two weeks and then they stopped when COVID got worse. When they moved him to Patricia Neal (Rehabilitation Center), I would go in maybe once every two weeks to see what therapy they were doing on him to where they could show me.”

Being confined to a bed left Danny needing physical therapy. He returns Tuesday to FLMC to continue rehabilitation. He uses a cane to walk as he builds strength.

Just two doors down from Danny at Parkwest was his niece, Callie Davis, who also tested positive in October.

“There’s really no describing the feeling that you have when you’re in there all alone in the dark, sick, not knowing if you’re going to live or die,” Davis said.

She said having Danny home could be the best way for him to fully recover.

The homecoming was an incredible Christmas present, especially for grandson Skyler McGinnis. As the vehicle bringing Danny home stopped in the driveway, McGinnis rushed forward with tears in his eyes to give his grandfather a hug.

“I haven’t saw my papaw in three months,” McGinnis said. “I’ve got to talk to him for the past month over the phone, but I haven’t got to see him at all. He’s been my hero since I was first born. A lot emotions, a lot of anxiety, but mostly I’m just happy he’s home.”

“We’re so thankful,” Carla Wiggins, Danny’s sister-in-law, said. “I mean we were told more than once that he was declining and we weren’t sure if we were ever going to see him again. It’s a miracle to us. It’s miraculous, and we all just love him. He’s just a precious man.”

Shelley Pace agreed getting him back was a blessing.

“I don’t think there’s any words for it,” Pace said. “All those that know him know how good of a man he is. We’ve been praying very hard, the whole family. It’s not usual to see papaw knocked down, so that’s the hard part.”

“I just want everybody to realize that this is real and everybody to try to do what they can,” he said. “If you do love each other, show it. Don’t be afraid to show love, because we don’t ever know from one day to the next. We’ve always read this in our Bible, we’re just a vapor. We could be here just and gone the next minute, but it’s real. That part’s real.”

As of Monday in Loudon County, there were 779 active COVID-19 cases, 3,232 recoveries and 35 deaths, according to the Tennessee Department of Health.