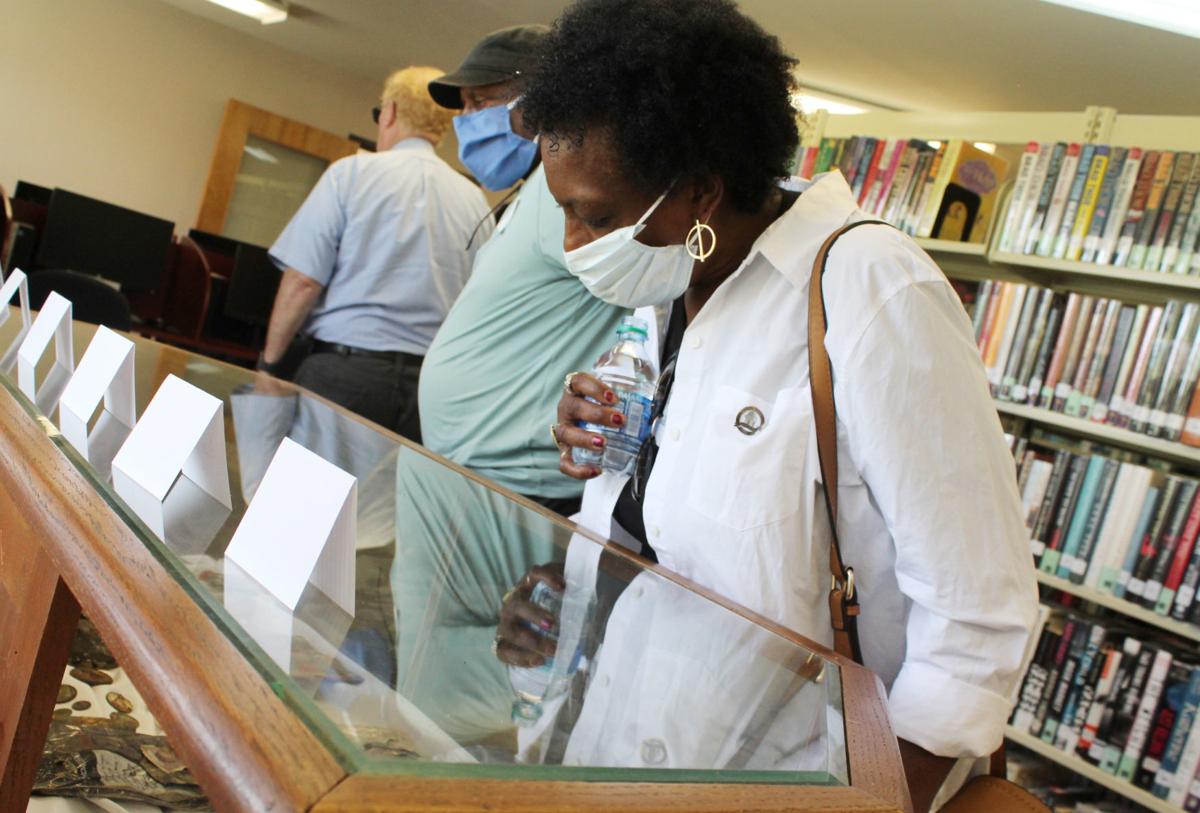 Cynthia Ferguson looks at items exhumed from the 1970 time capsule. 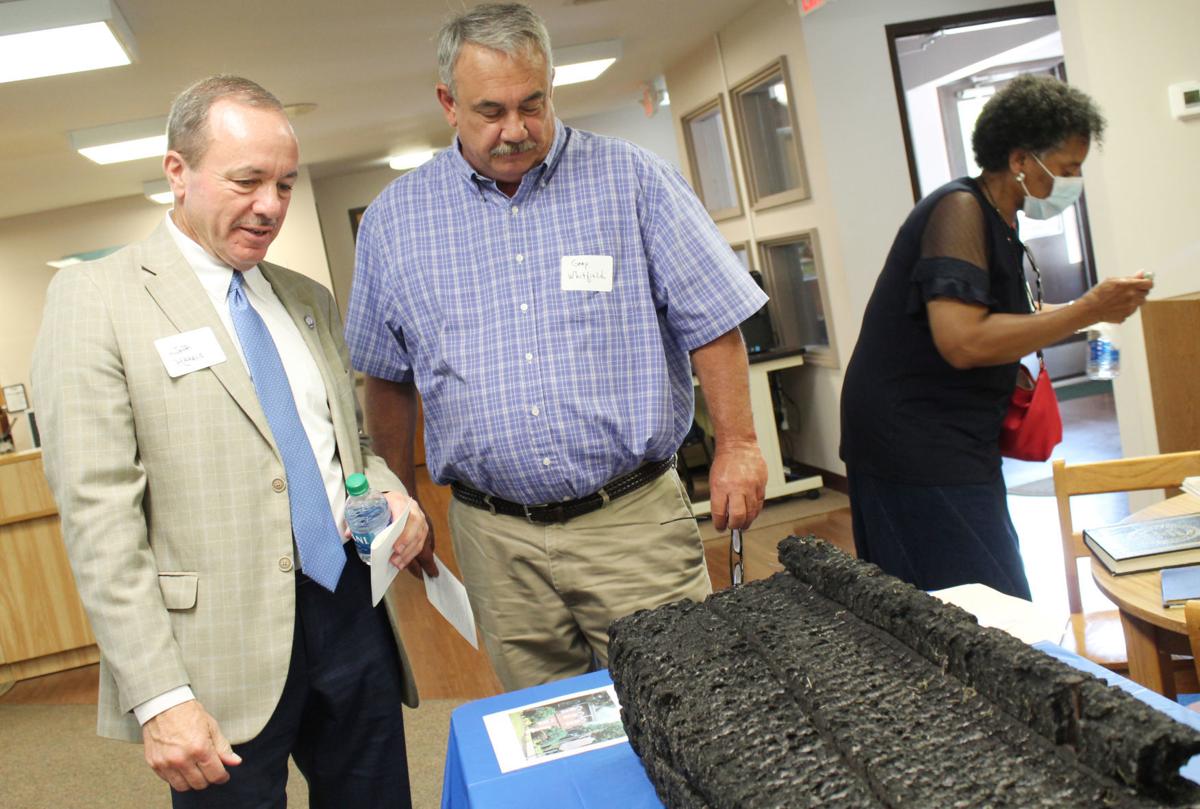 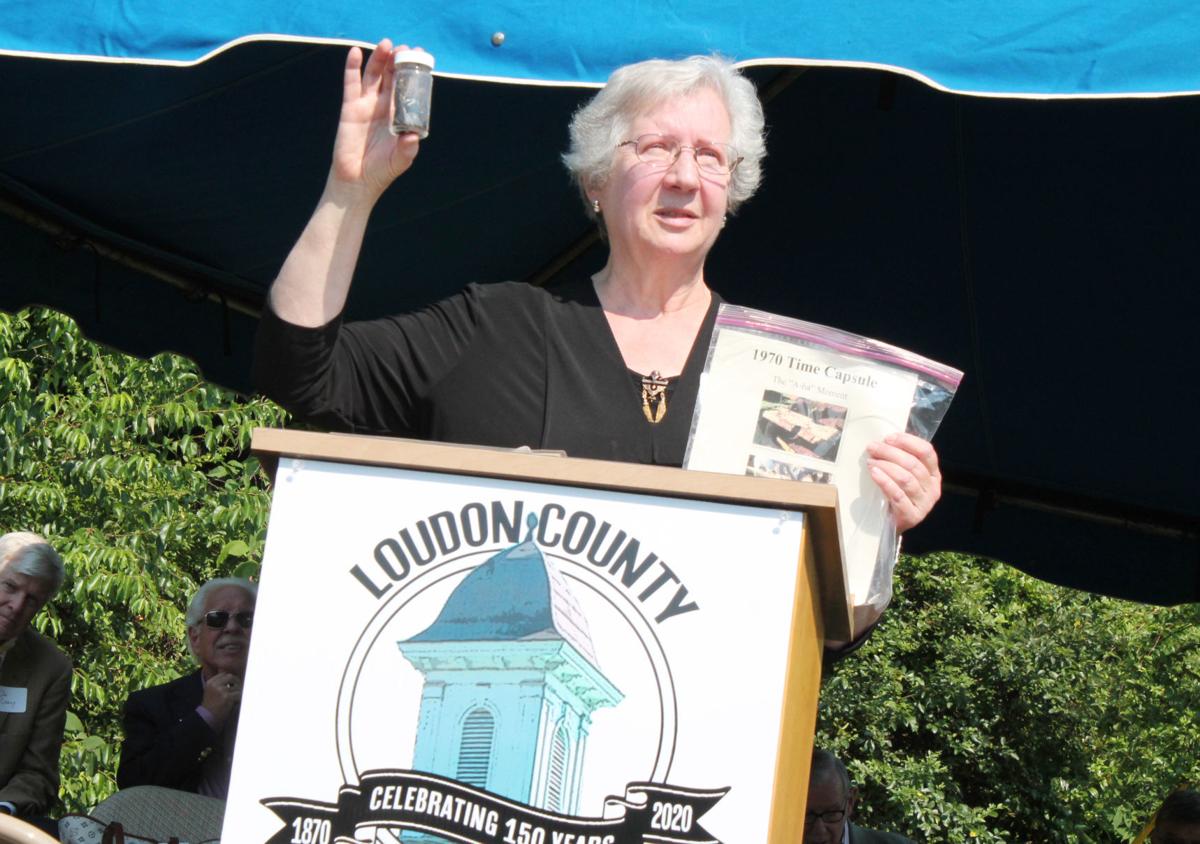 Ruth McQueen, Loudon County Sesquicentennial Committee member, shows some of what was left in the time capsule from 1970. 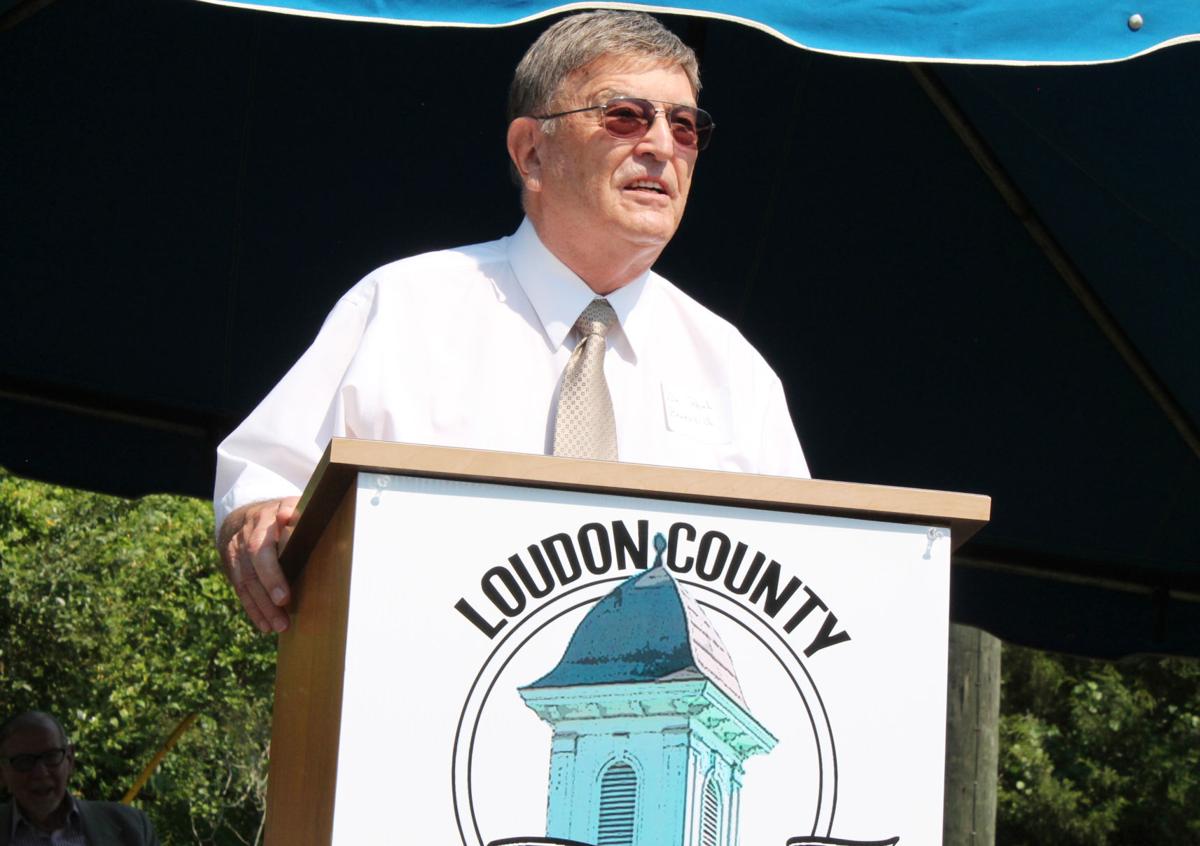 Dr. Paul Brakebill discusses what he remembers from 1970 when the first time capsule was placed in the ground. 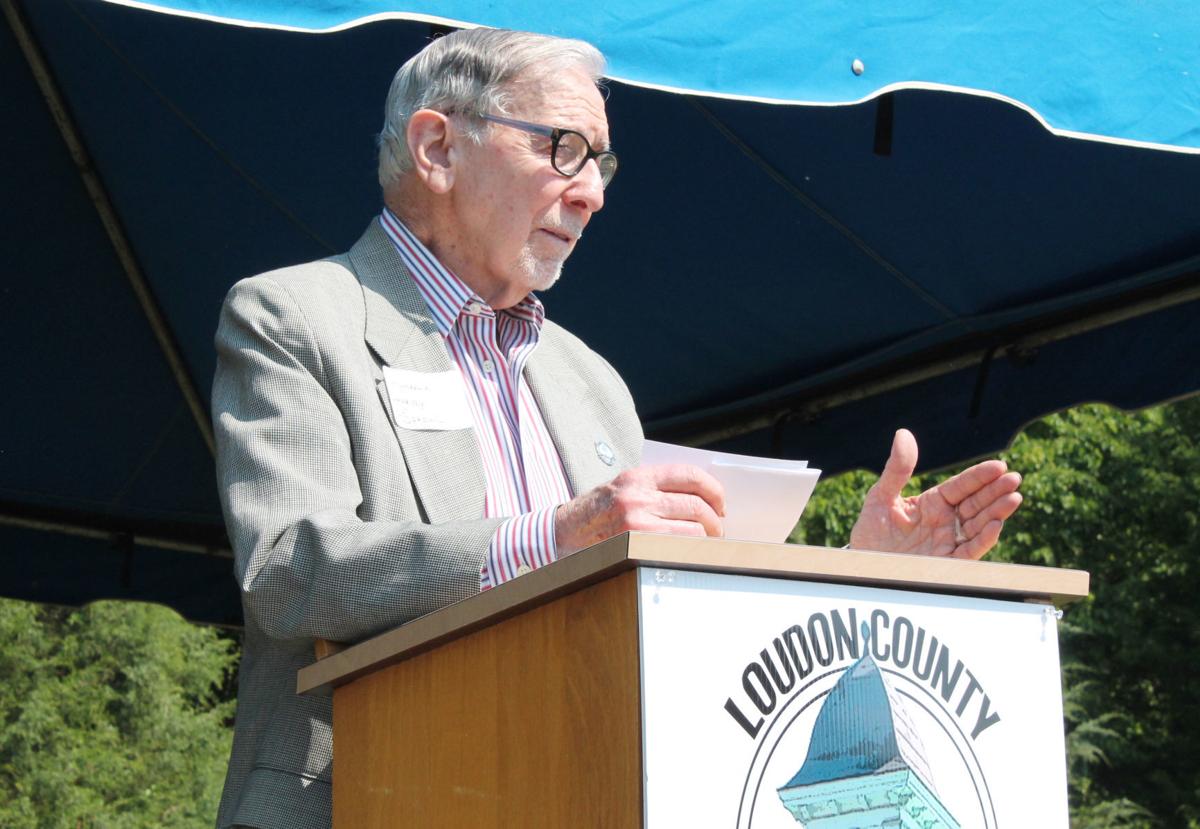 Cynthia Ferguson looks at items exhumed from the 1970 time capsule.

Ruth McQueen, Loudon County Sesquicentennial Committee member, shows some of what was left in the time capsule from 1970.

Dr. Paul Brakebill discusses what he remembers from 1970 when the first time capsule was placed in the ground.

A ceremony at 10 a.m. outside the Loudon Public Library was streamed online and recorded for future viewing. At least one representative from each part of the county was present, including mayors, county commissioners, Loudon County Sesquicentennial Committee members and those involved in the 1970 time capsule burial.

“We’re looking forward to the future,” Carey said. “Our plans with this committee are to focus on what’s ahead in the last second half of this year for our celebration.”

Although a smaller ceremony was held Saturday, a public event is scheduled Nov. 14 with hopes of it being at the courthouse. Carey hoped to use Saturday as a kickoff celebration for the remainder of the year.

The ceremony included the showing of items exhumed from the 1970 capsule in March, which were displayed in the library along with a charred courthouse beam.

“You may chuckle a little but if you put your thinking caps on and think about who or whom might be sitting in these chairs 50 years from now and what they will be saying about the history of Loudon County and those who were here 200, 100, 150 and then those who came and started all this many, many years ago,” she said.

McQueen and others dried damaged materials from the old capsule. Committee members agreed to exhume the capsule in hopes of preventing an “uh oh” moment.

“The vault was not waterproof,” McQueen said. “Fifty years is a long time, and we had two of the wettest springs we have ever had in the history of mankind in Loudon County. The casket was not a casket, it was a pine box that had rotted and the top had fallen in on all the material.”

Items were displayed in the library labeled Faith, Service, Hobbies and Family.

“There are things that mean something to people,” McQueen said. “The second would be Service. Out of all these things that came out of the time capsule, we have two military dog tags. One belongs to Raymond McJunkins, who is still alive and I believe has had his 90th birthday. The other one belongs to Winston Reagan, who I believe most people here in town knew better as Doyle, and obviously service military men and women have been a big part of this community. ... So in some ways we have already had a grand celebration of the time capsule for the things that are important. There’s things in the capsule that you will see that remind us work and play. People put in more things about their hobbies and their interests and what they did in their spare time than their work.”

Although most was lost from the capsule, McQueen felt it possibly best all the stories weren’t told.

“Maybe the things that are not seen are the most important part of the legacy that our forbearers left for us in this time capsule,” she said.

Items will be displayed for a few weeks in county libraries during the rest of the year.

With the help from the Tellico Village Woodworker’s Club, a new capsule will be ready for the public later this year.

Kate Clabough, committee member, said the public will be able to contribute to a new capsule.

“Our intent is to not bury this one, and it’s surely not to bury the old relics from the 1970 time capsule,” Carey said. “Our intent is to display in public, in a county building. We hope to do it in the courthouse, but the future of the courthouse as the commissioners here will tell you is uncertain right now and especially the space that might be available.”

Carey thanked Loudon County Mayor Rollen “Buddy” Bradshaw and Loudon County Commission for their assistance in acquiring old beams and metal rods salvaged from the burned courthouse. Material will be used for the new capsule and a cabinet to display the old capsule, he said.

“I mean just the incredible foresight to have this 50 years ago,” Bradshaw said. “I remember the first time I saw the mark in the ground I was a young man, maybe borderline child I guess, I don’t remember exactly, but I thought, ‘Wow, that’s going to be forever getting here.’ I hope I’m there when it happens. Time has that way of just rolling along. Just it’s great to be a part of it.”

Bradshaw plans to place inside the capsule personal items and a letter to the 2070 mayor. He doesn’t want to share what it will say.

“I’m going to tell a little bit about my story and how I got here, and I’m going to talk about commission, members of commission and what a great group they are to work with,” he said. “Going to talk about everything that’s went on in the last year between a courthouse fire, a pandemic, a nation desperately searching for unity. But I’m going to tell them how Loudon County is a little bit better than that. That we have our unity. We have our opinions, no doubt, but at Loudon County we do things a little bit better and we hold ourselves together.”

Carey said education will be a focus through the remainder of the year, beginning with a county historical coloring book found at the libraries.

“Obviously, we’re going to challenge every kid in every school to put something in the new time capsule because they will hopefully be around to see it,” Carey said. “We’re going to do essay contests. We’re going to work with the Loudon County Education Foundation, the Greenback School. Wiley Brakebill is going to be helping us with some ideas there on essay contests. ... Our education initiative will involve the kids at all ages, so we want them to do essays, we want them to maybe help us with a pageant. We’ll be doing a lot of things, especially depending on when school is up and running properly, challenging our teachers, but our first foray into that is our coloring book, which I’m going to ask — and it’s there for the younger kids and it’s been a great project, a lot of work’s gone into it.”

Beverly Sweeney, committee member, said this year’s book is dedicated to former county historian Joe Spence, who played a role with Nancy Majors in creating the 1978-79 book when they were Lenoir City High School teachers. She thanked Loudon High School teacher Kris Peterson for help with the book.

Saturday was used to honor the original request to hold a ceremony June 20, and two of those people were present to say what they remembered in 1970.

Harvey Sproul served as county judge, which is now county mayor. He pushed for the capsule to be exhumed after 50 years instead of 100 in hopes some would be alive.

“It was raining that day and we stood around and stood around, tried to figure what to do, about whether to go ahead and have it or postpone it, and finally decided that we would go ahead and have it,” Sproul said. “So we all went out in the rain and did the dues about sealing it up or starting to cover it up. I think it’s a wise idea to plan on not burying it anymore.”

Sproul spoke about serving as county judge, the challenges and what he remembered from the time.

“The first thing I remember was thinking how old I would be 50 years later,” Dr. Paul Brakebill said. “I was 35 then so you can do the math. I do remember that we had street festivals, we had dances, we had one I believe was in the old Bacon Hosiery mill parking lot, and we had one in Lenoir City and I’m sure we had others but that’s the only two that I do remember.”

A highlight was when the committee visited the White House and met President Richard Nixon.