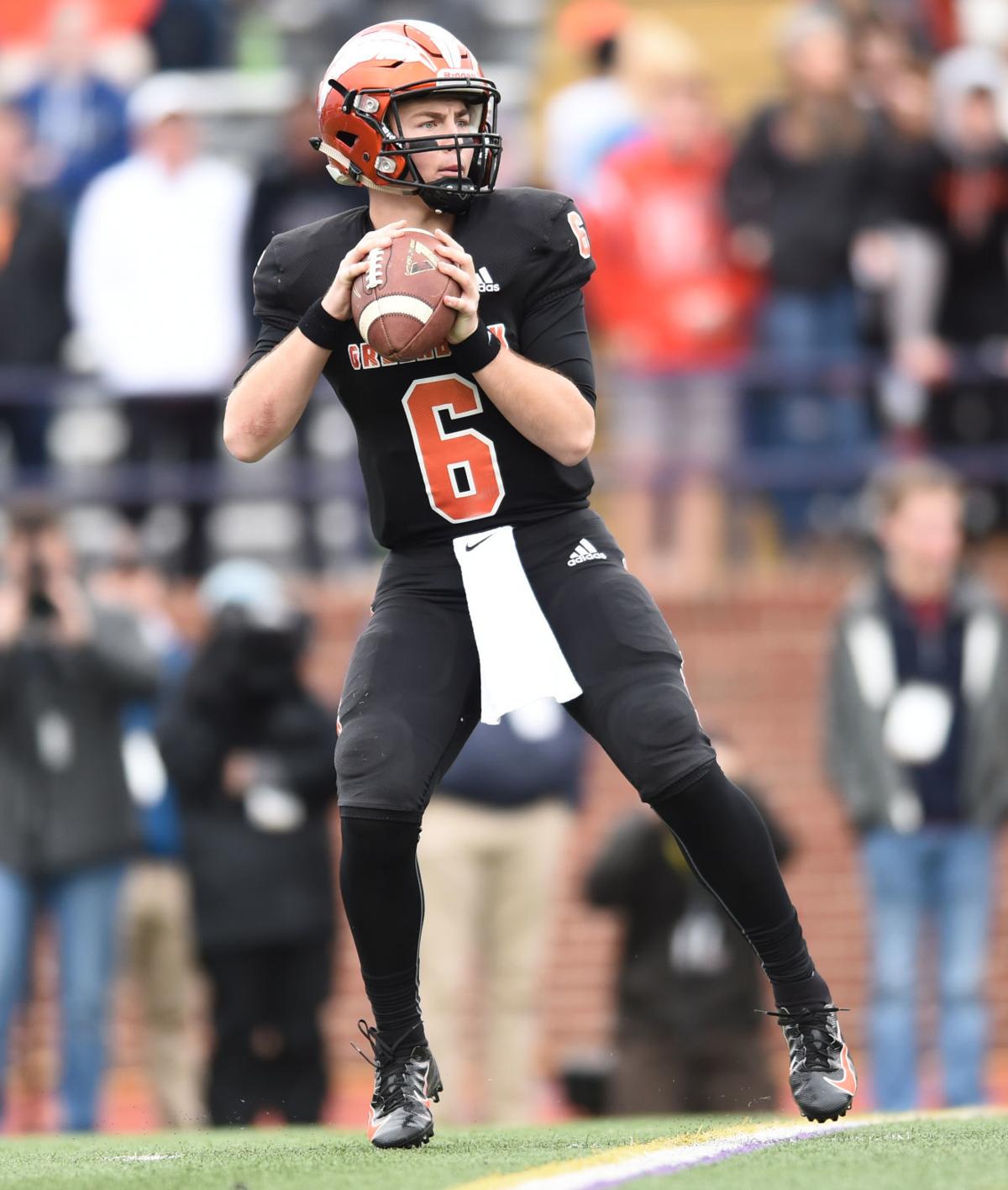 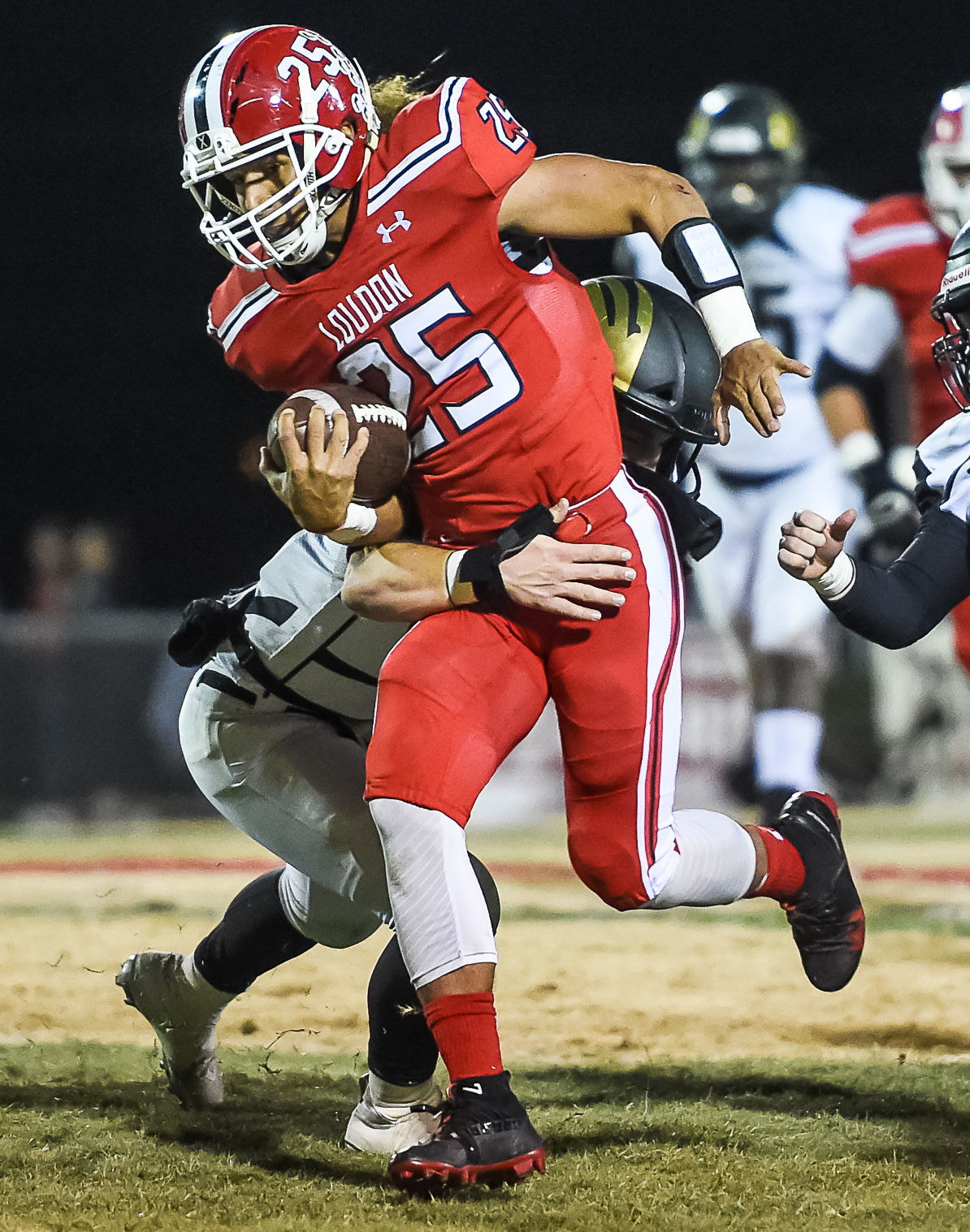 Loudon High School’s Drew Jackson sheds a defender in the Redskins’ 41-7 win over the Smith County High School Owls in the second round of the Class 3A playoffs. 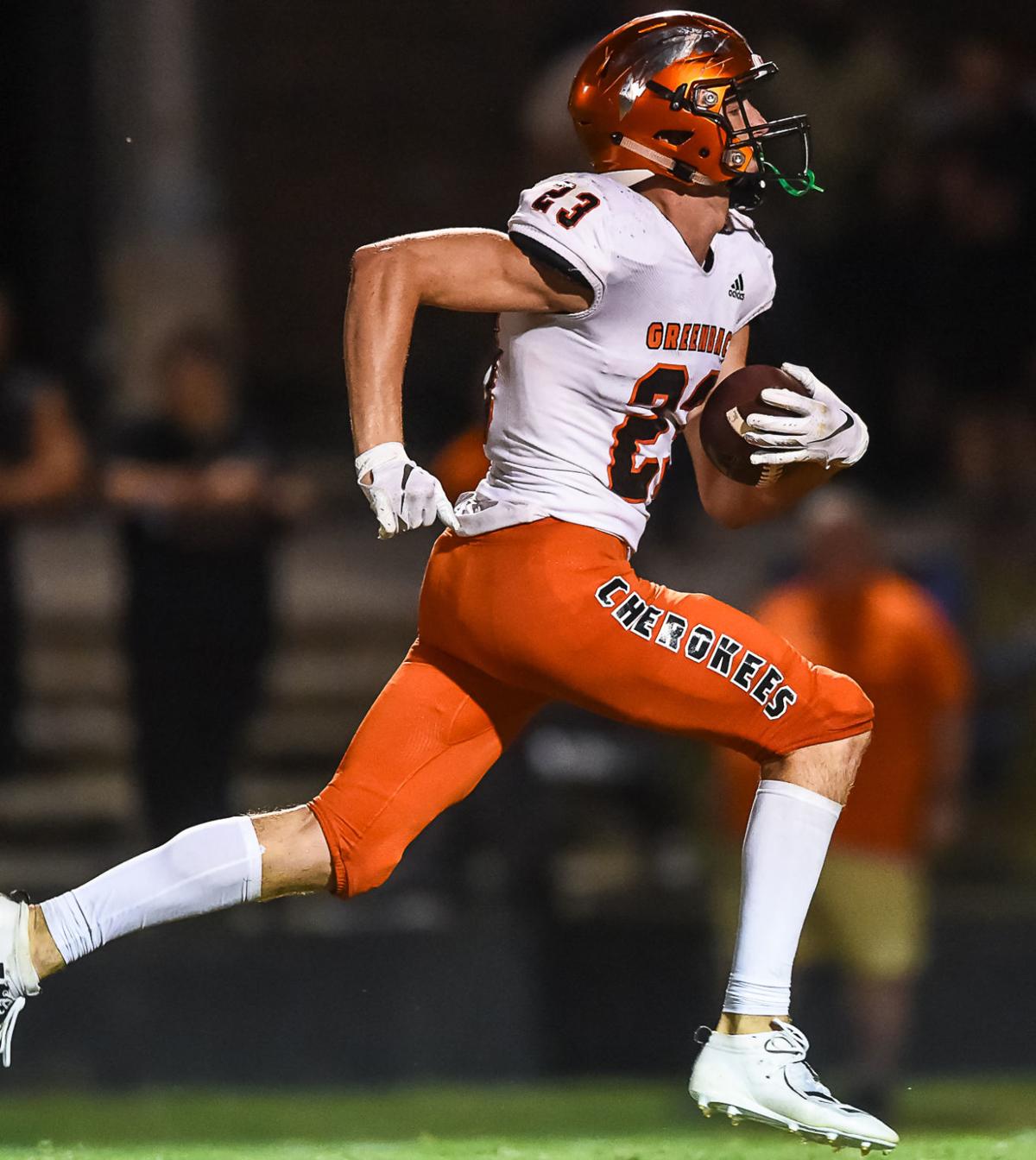 Greenback School’s Holden Willis sprints into the end zone in the Cherokees’ 45-20 win over the Coalfield School Yellow Jackets. 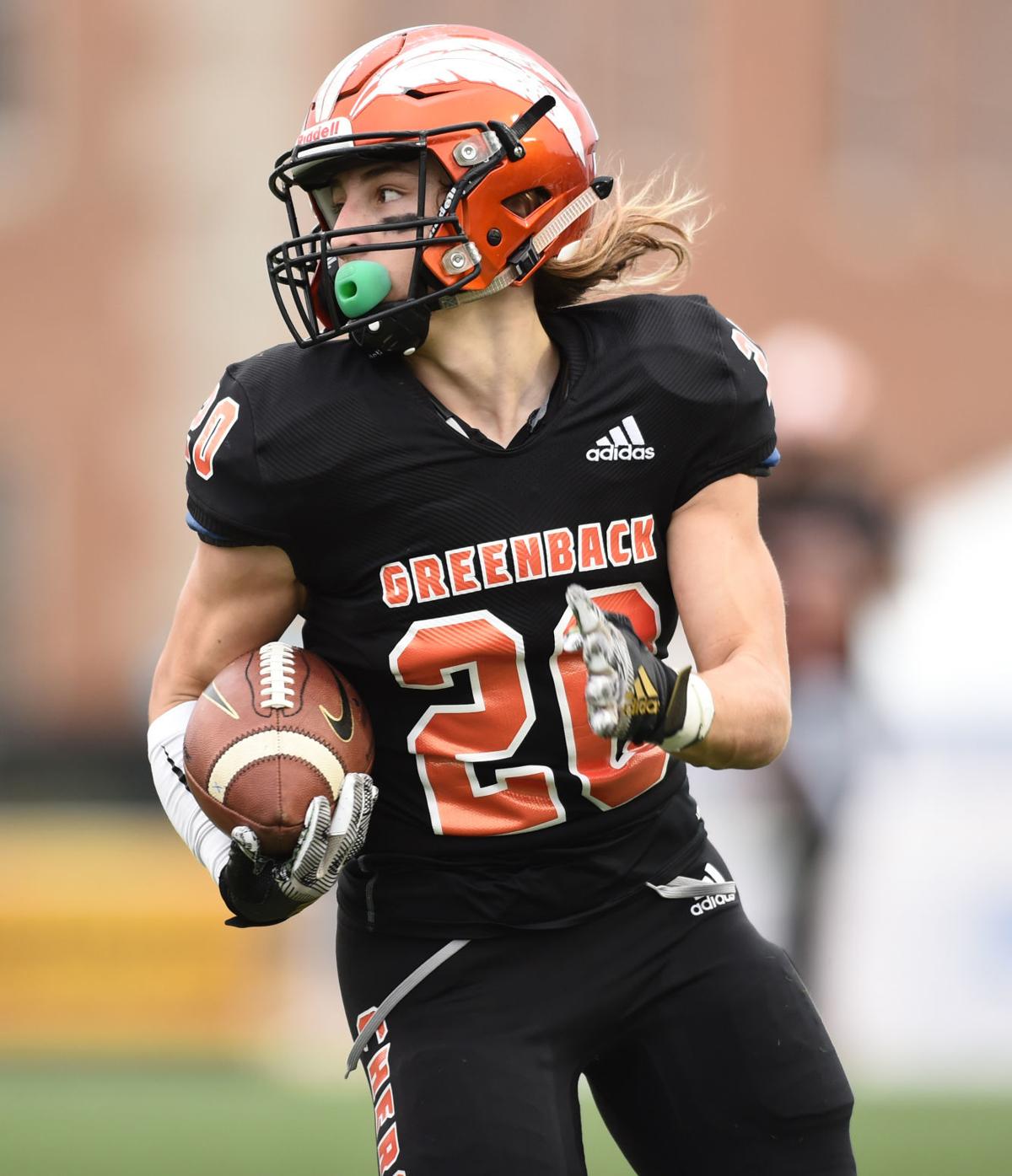 Greenback School’s Duke Stinnett races down the field Dec. 6 during the Class 1A BlueCross Bowl. 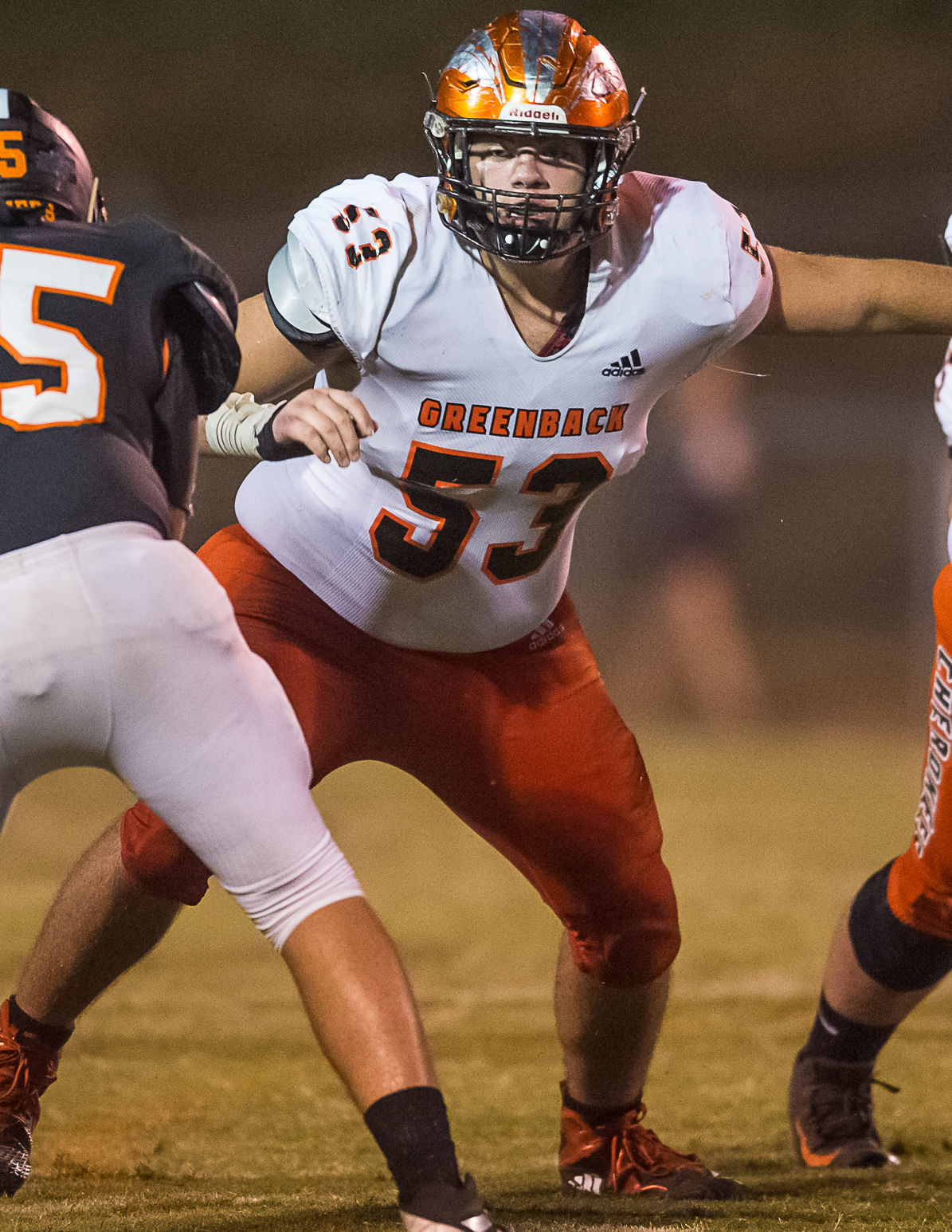 Greenback School’s Tyler Jeffries fires off the line in the Cherokees’ 51-7 win over the Lenoir City High School Panthers. 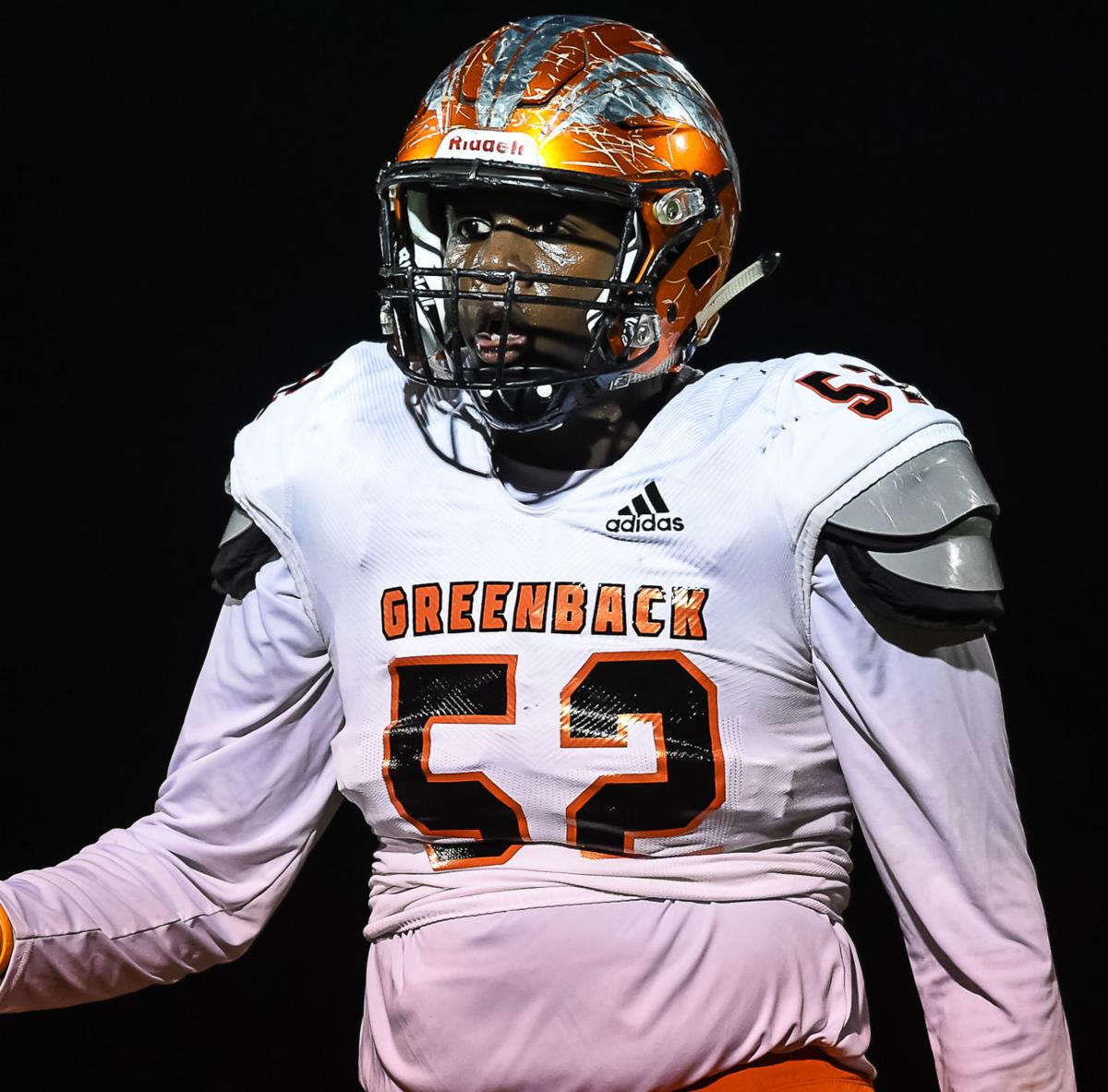 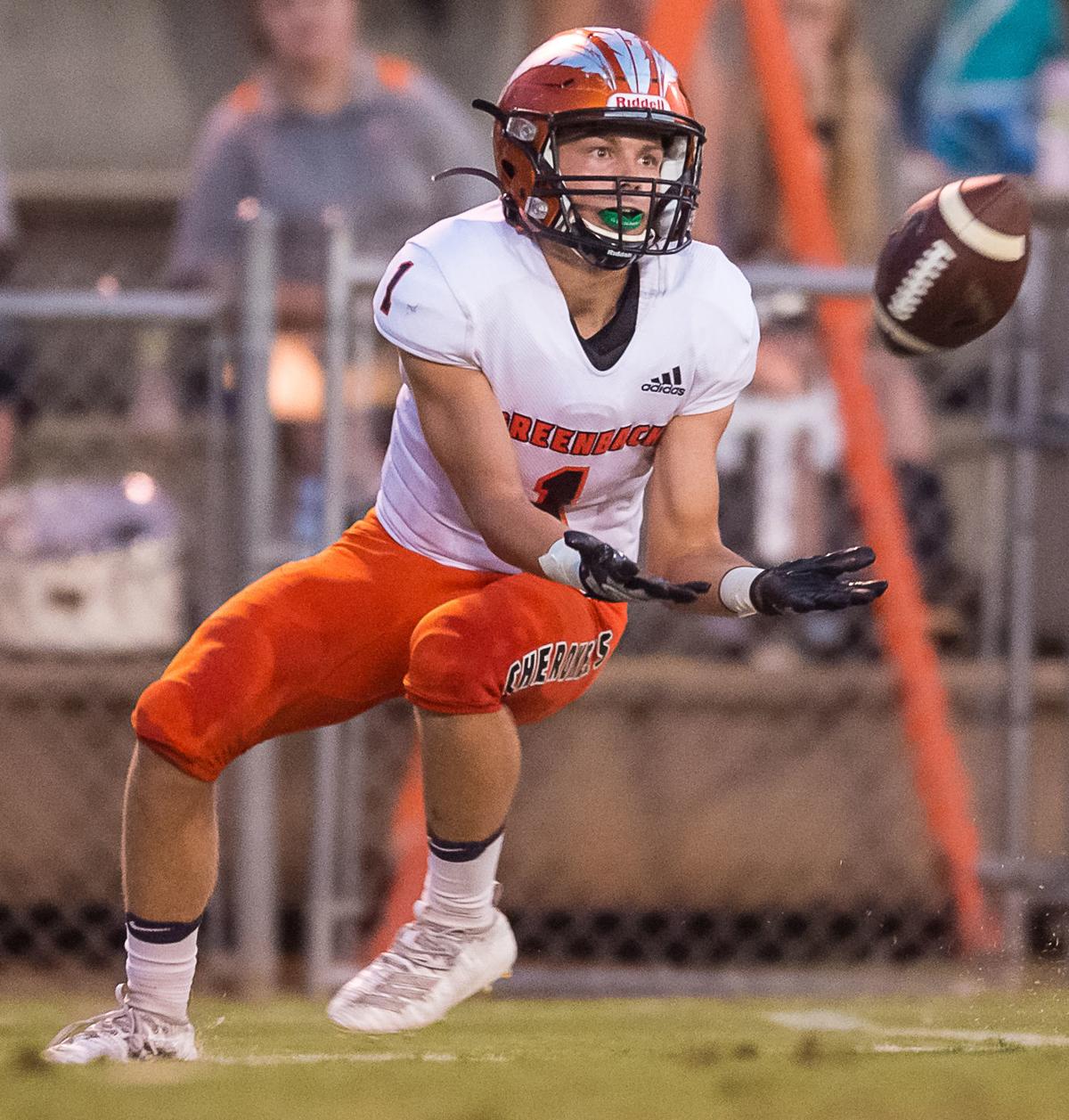 Loudon High School’s Drew Jackson sheds a defender in the Redskins’ 41-7 win over the Smith County High School Owls in the second round of the Class 3A playoffs.

Greenback School’s Holden Willis sprints into the end zone in the Cherokees’ 45-20 win over the Coalfield School Yellow Jackets.

Greenback School’s Duke Stinnett races down the field Dec. 6 during the Class 1A BlueCross Bowl.

Greenback School’s Tyler Jeffries fires off the line in the Cherokees’ 51-7 win over the Lenoir City High School Panthers.

Six players from Greenback School and one from Loudon High School were selected to the Class 1A and 3A teams, respectively, through a series of statistics, personal observation and coaching suggestions.

The senior transfer from Maryville High School made an immediate impact for the Cherokees this season after the departure of two-time starter and All-County Player of the Year Bryce Hanley.

Carnes was selected to the TSWA Class 1A All-State Team as a quarterback after completing 196 passes for 4,141 yards, 52 touchdowns and nine interceptions. He also set several school and Tennessee Secondary School Athletic Association records in his one year as a Cherokee, becoming only the second quarterback in TSSAA history to throw for more than 50 touchdowns in a season.

Carnes led the Cherokees to their fourth BlueCross Bowl in the last five years and will go down as one of the best offensive players in school history after just one season. He was also named to the Tennessee Football Coaches Association Class 1A All-State Team.

Drew Jackson was an exceptional starting quarterback for the Redskins in 2017, but a high ankle injury sidelined him for the majority of the 2018 season and led to his permanent switch to running back in 2019.

Preseason questions surrounded Jackson’s ability to carry the ball, but he proved one of the best running backs and overall athletes in the state after carrying the ball 167 times for 1,415 yards and 21 touchdowns, while also adding four more scores as a receiver.

He was also an impact player on defense as a cornerback and came away with two crucial interceptions in the 33-14 win over the Red Bank High School Lions in the Class 3A quarterfinals.

Jackson was named the Region 3-3A Most Valuable Player and started for the East team in the Tennessee East-West All-Star Classic in December, where he rushed 10 times for 50 yards and a score. In addition, he was named to the TnFCA Class 3A All-State Team.

After suffering a collarbone injury during the playoffs last season, Holden Willis bounced back en route to becoming the best receiver in Greenback history.

Willis capped off the year with 73 receptions for 1,729 yards and a TSSAA record 28 touchdowns. He also started at safety for the Cherokees, finishing with 45 tackles, 34 assists, five tackles for loss and an interception.

In addition, Willis became the school’s third Tennessee Titans Mr. Football Award winner in the last four years and was named to the MaxPreps Small Schools All-American and TnFCA Class 1A All-State teams.

Willis has several Division 1 offers, including a preferred walk-on offer with the University of Tennessee. He is set to make his collegiate decision Feb. 5 on National Signing Day.

Duke Stinnett complimented Willis on the outside with his speed and served as one of the Cherokees’ most potent offensive weapons.

Stinnett was named to the TSWA and TnFCA All-State teams as a receiver after completing 50 catches for 1,182 yards and 12 touchdowns. One of his best performances came Dec. 6 in the Class 1A state championship game when he hauled in four catches for 116 yards against Lake County High School.

Stinnett was also a starting defensive back and totaled 41 tackles, 26 assists and 3.5 tackles for loss.

Standing at 6-foot-6 and nearly 300 pounds, Greenback freshman Tyler Jeffries was a force along the offensive and defensive lines.

Derrell Bailey Jr. made a big impact along the defensive line the last three years at Greenback and was a key part in helping the Cherokees build one of the best defenses in Class 1A.

The senior defensive lineman finished the year with 40 tackles, 46 assists, 11.5 tackles for loss and an interception. He graduated in December and is an early enrollee at Virginia Polytechnic Institute and State University, where he is expected to contribute immediately at defensive end for Hokies head coach Justin Fuente.

Bailey Jr. was also named to the TnFCA Class 1A All-State Team.

When Wyatt Rutgerson transferred to Greenback from William Blount last spring, the coaching staff knew they had a special talent and how to fit him in the offensive game plan.

Rutgerson made an immediate impact for the Cherokees with his quickness, speed and playmaking ability that led to him rushing for 873 rushing yards and 13 touchdowns. He was also a dynamic receiver out of the backfield with 33 receptions for 559 yards and four touchdowns.

Rutgerson also started as a defensive back and finished the year with 45 tackles, 28 assists, five tackles for loss and five interceptions and capped off his senior year as the Region 2-1A Defensive Back of the Year and a selection to the TnFCA Class 1A All-State Team.