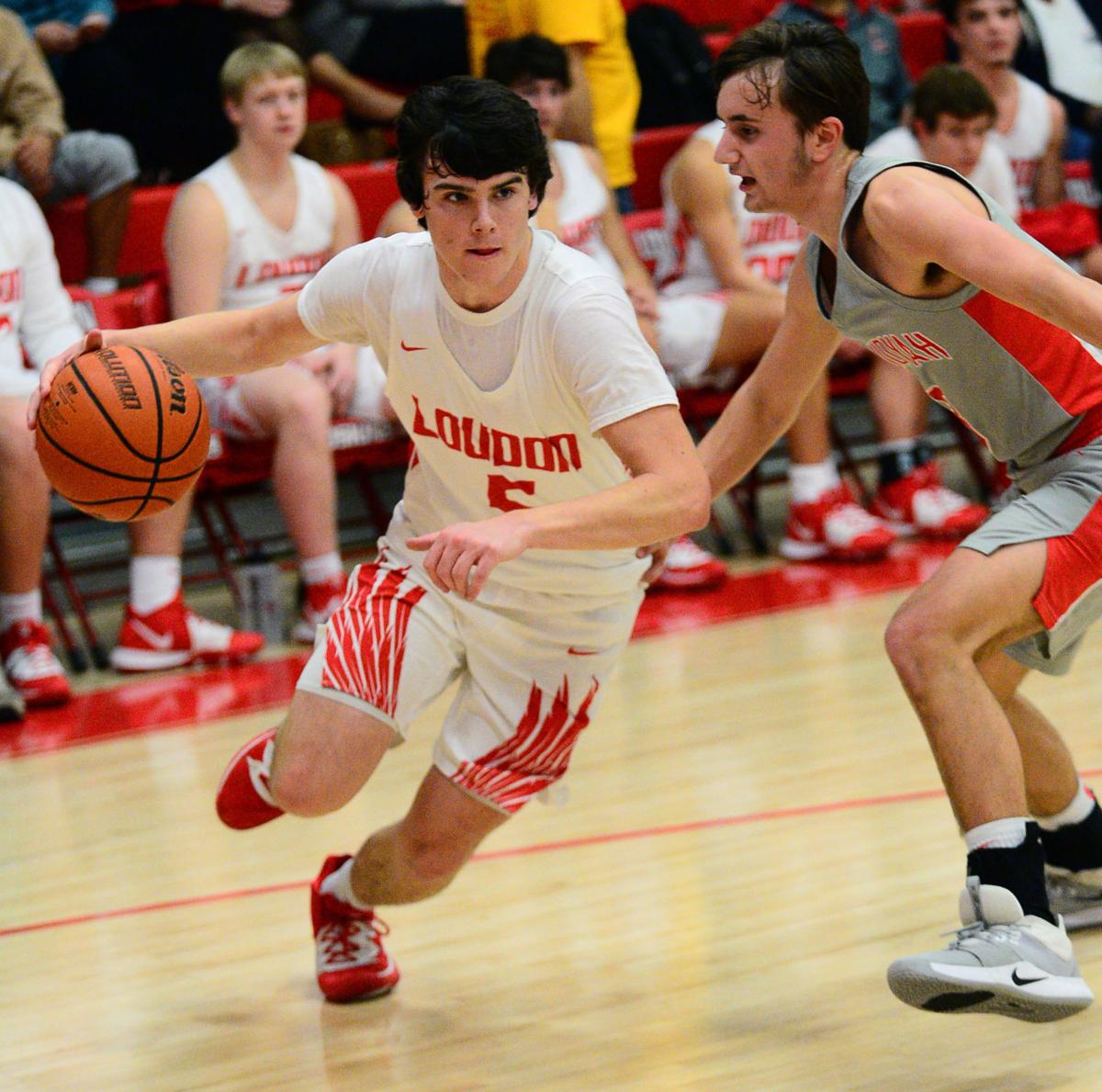 Loudon High School’s Donovan Blankenship drives past a defender Thursday in the Redskins’ 49-35 win over the Sequoyah High School Chiefs. 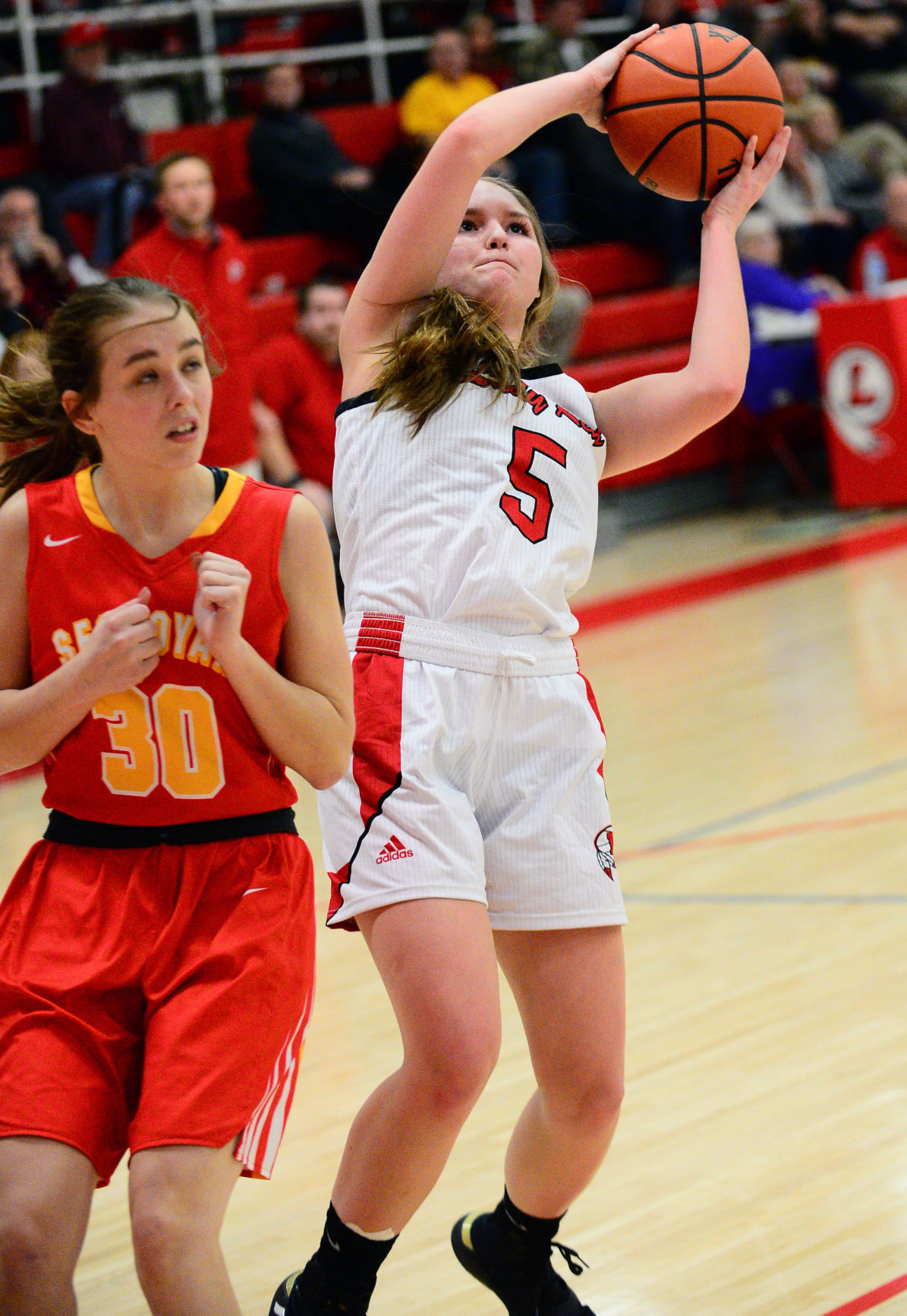 Loudon High School’s Donovan Blankenship drives past a defender Thursday in the Redskins’ 49-35 win over the Sequoyah High School Chiefs.

The win marked the Redskins’ first in district play this season, but it was extra special for Graves, who served as the Chiefs’ head coach prior to returning to LHS last year.

The last time both teams met, Sequoyah shattered the Redskins’ goal of playing for the district tournament championship.

“Man, it’s a little extra special,” Graves said. “I’m very grateful to Sequoyah and the people there that loved me and took me in and just thankful for my first opportunity as a high school head coach. You see parents of kids you used to coach who take time to talk to you before or after the game, but it was sweet — it was sweet in the sense of some of the actions and words that were said last year after that game, after they beat us, I really wanted to get this one because of that as well. ... I’m blessed to be a Redskin.”

Loudon got off to a quick start with a 9-0 run in the first quarter, which was sparked by a three-pointer by former SHS senior guard Gunther Millsaps.

The Redskins continued to pour it on in the second quarter with a 7-0 run and limited the Chiefs to eight points to lead 24-11 at halftime.

“I felt like we needed to keep them off balance, keep it switched up with the man and the zone and whatnot,” Graves said. “We tried to run a little bit of 1-3-1. They got a couple of corner looks, so we didn’t go to it much. We did get a turnover in the 1-3-1 with that fire trap, so you kind of give or take there ... you give up two, but you take one. The boys have really done good in the Syracuse-type 2-3 and in man-to-man they do a pretty darn good job. We really focused on their little slice set that they run, and they do a really good job with it.”

Sequoyah came out swinging in the third quarter and dished the ball to their big center Jackson Kuberka, who finished with 16 second-half points.

“Yeah, he (Kuberka) was big for them late,” Graves said. “I thought they made more of a conscious effort to get him the ball in that zone because we were spaced out on the shooter. They did a good job of getting their shooter ballside where they tried to post him so they couldn’t dig down on him, and when you let a kid that’s as skilled as he his with his size and ability, get a one-dribble move before you touch him. In man, I thought we did better on him because we were attached ... Noah and Whitfield were able to use those big frames and they’re hard to score over.”

Loudon managed to remain ahead in the fourth quarter with hot shooting from junior Donovan Blankenship and Millsaps. Millsaps proved the Redskins’ best all-around performer with scoring, ball disruption and consistent pressure.

Similar to Graves, picking up his first district win as a Redskin against his former team was a special experience.

“It was really good, I mean, it’s like another district win for me, for us,” Millsaps said. “We’re just out here playing, hopefully going to get better and win more district games. Yeah, it kind of fueled me. It’s just another game, there’s nothing really to it. I just had a little energy, I guess.”

Millsaps has gradually earned more playing time and is learning to adjust to his new team.

“Oh, it’s been pretty tough, but I love it,” he said. “I’m glad I’m here, I wouldn’t trade it for nothing. It feels real good. I just came in with a different purpose.”

The Redskins followed up that performance Friday with a big 51-27 victory over the Meigs County High School Tigers to improve to 2-2 in district play.

The Lady Redskins trailed by two following the first quarter, but LHS girls head coach Josh Brannon believes the tide shifted in the second quarter when the Lady Chiefs went on a 9-0 run.

“You know, they went on a couple of runs that we didn’t shoot the ball as well as we usually do from the perimeter,” Brannon said. “We’re still a little bit banged up, and so they didn’t catch us 100 percent healthy tonight, but we went through about two runs that are very vivid in my mind where they got hot making shots on the perimeter. The ball bounced a couple of different directions, it may be a different game, but I think that game was a lot closer than that final score indicated. There was a couple of times when they went on a scoring run, and we went through a couple of droughts at the wrong time and that kind of snowballed into the final outcome of the game.”

Sequoyah came out firing again in the third quarter, going on a 7-0 run before Molly Russell, Ashley Stoner, Summer Parnell and Carrie Pittman each added a basket.

The Lady Chiefs continued with their full-court press and limited the Lady Redskins to just two points in the fourth quarter.

“I thought, you know, we got in a little bit of foul trouble at times and it changed some of our lineup looks,” Brannon said. “Again, some fatigue set in, and I think we let that get the best of our decision-making at times, but there were some moments, especially with some of our younger players that stepped up and showed some growth. There were a lot of positives to take away and build off of.”

The Lady Redskins dropped another district game Friday against Meigs County and played Sweetwater on Tuesday after presstime.

“Just continue to grow, you know, we’ll focus on the specifics of what we need to do to get better,” Brannon said. “Our kids, I feel like they always give great effort. They don’t play to the scoreboard, they play very hard so as long as we continue to grow on our mistakes and things that we need to improve upon ... it’s a tournament season, it’s a tournament game, so we’ve got 14 regular season games left, we’re not playing our best basketball yet. We’ll continue to get better and improve and we’ll get more experience along the way. We’ll get to play them again, so it may be a different game the next time it rolls around.”