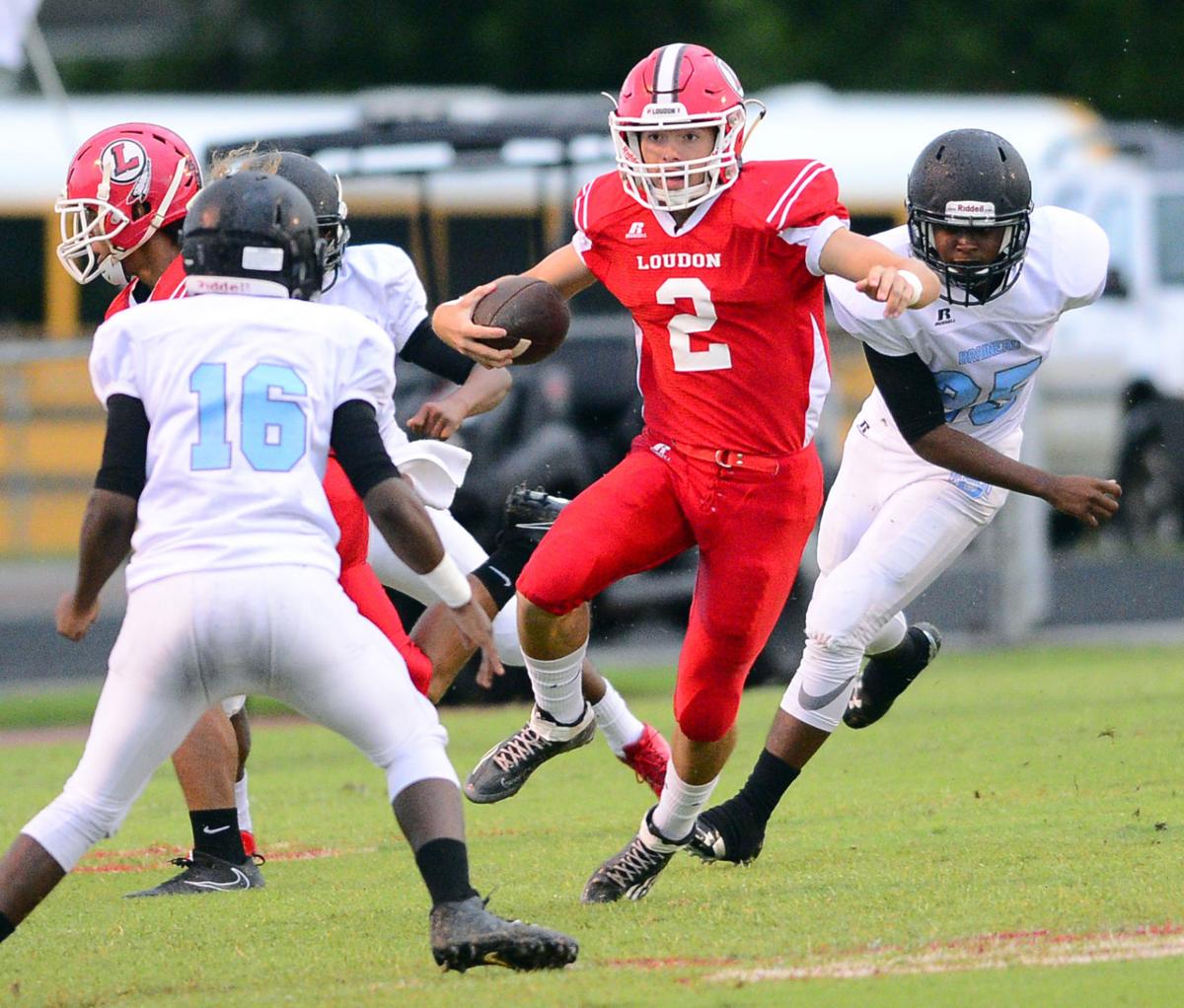 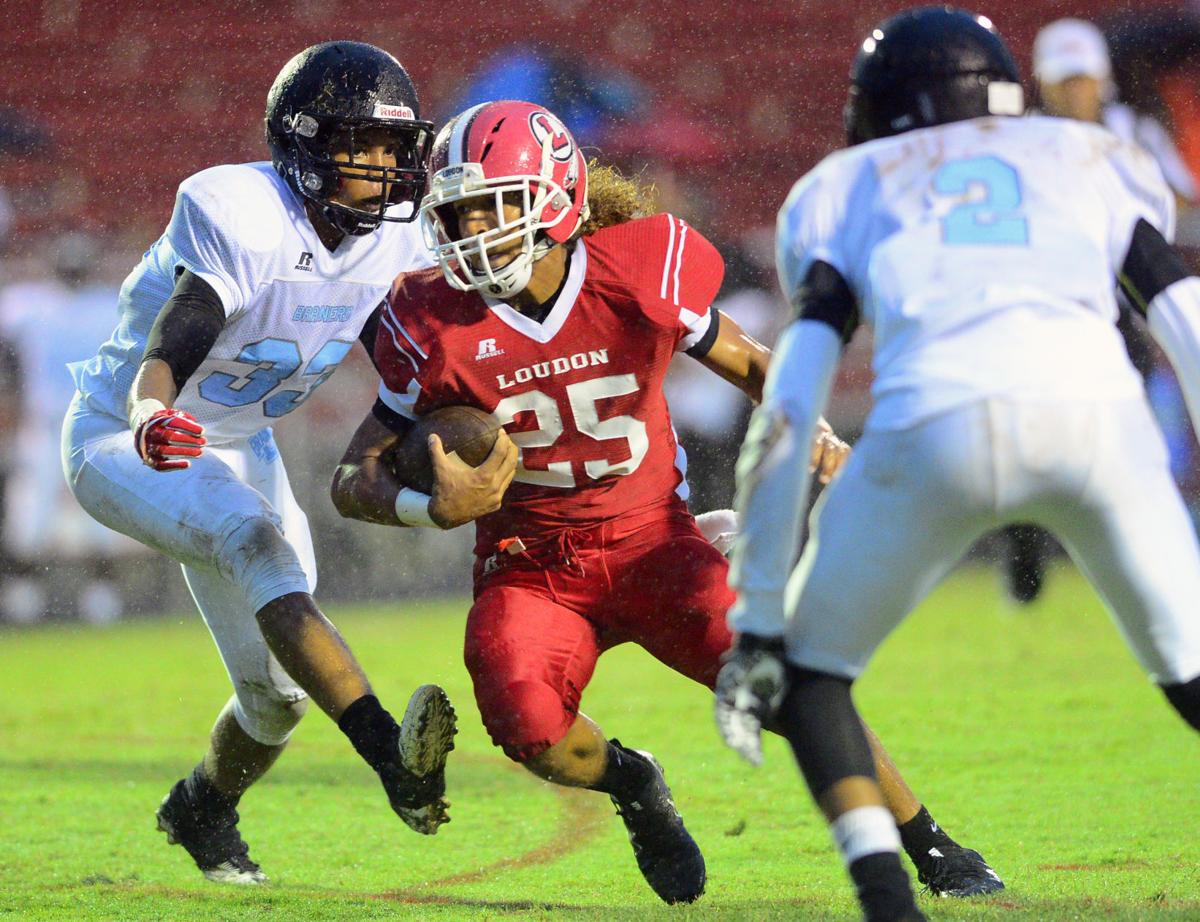 Rainy conditions Friday night didn’t slow the momentum of the Loudon High School Redskins (2-1, 1-0 region 3-3A), who picked up a 27-12 win over the Brainerd High School Panthers to open region play.

“I thought we showed competitive toughness in that things weren’t necessarily that easy for us,” Jeff Harig, LHS head football coach, said. “Offensively — the first two games — things have been very easy for us. We’ve been able to big play teams to death and we’ve been able to score it well. Tonight, it was a struggle. Some of it was self-inflicted and Brainerd has a really good defense. They’re big and athletic, so for us to completely stay with the plan and manage the game was big.”

Both teams struggled on their first few possessions in the first quarter until Loudon finally found some life on offense.

After a delay of game penalty on the Redskins, quarterback Drew Jackson hooked up with Cameron Baker for a 58-yard pass to get down to the two-yard line. Jackson then punched in the first score to give Loudon a 7-0 lead heading into the second quarter.

The Redskins took advantage and drove down the field, eventually setting up a five-yard rushing score from Skyan Lyle to put Loudon up 14-0 with less than nine minutes in the first half.

Brainerd finally gained some momentum on offense on the next drive after completing a 34-yard pass, but fumbled the ball again, which LHS defensive end Josh Russell recovered.

With the ball in their own red zone, Loudon gave up a costly turnover on the very next play when Jackson threw an interception that led to a Brainerd scoring drive to cut the lead to 14-6.

After a short kickoff, Loudon gained good field position and started at midfield when Jackson threw a 43-yard strike to Mark Ridenour to put the Redskins at the one yard line. Jackson punched in another score and gave Loudon a 20-6 lead at the break.

“We were able to get some big plays in the passing game during the first half,” Harig said. “We knew going into this game that Brainerd had a tendency to really give up some big plays, so we wanted to exploit that and go for it. I thought we did a nice job of that in the first half.”

Midway through the third quarter, Brainerd managed to cut the lead to eight.

The Panthers began to pressure Loudon in the fourth quarter, but two more fumbles cost them valuable possessions.

Loudon capitalized and went 44 yards down the field, which led to a six-yard rushing touchdown from Jackson to finish off the Panthers with a 27-12 score.

“I think in the end, that was the difference,” Harig said. “I know we had a turnover that gave them great field position right before the half, but for us on defense, they had some big turnovers that allowed us to get field position. Basically, the second half was just a game of field position and we were able to get a two-score lead. This was pretty much a game where you had to manage the clock, manage the down-and-distance and just outlast them.”

For Loudon, Jackson led the way offensively. Through the air, he threw for 141 yards, while adding 99 yards and three touchdowns on the ground.

“It was really rainy, so we couldn’t really get the pass game going,” Jackson said. “We had a few downfield opportunities that I missed, but we made up for it in the run game. I read my keys and my blocks. The line played great, too.”

Lyle was also a force in the run game, rushing for 95 yards and a score.

“I think our offensive line upheld their end of the bargain,” Lyle said. “Obviously, it was wet out there but I’m also a shifty player, so I think that made it hard for them to defend.”

With their best start since 2014, Loudon is looking to keep up the momentum next week against Sequoyah.

“I think this game will boost our confidence for the next few weeks,” Lyle said. “We didn’t get too ahead of ourselves after last week’s win over Lenoir City, so I think we’re doing a good job of handling that success. We’re going to be ready for Sequoyah.”