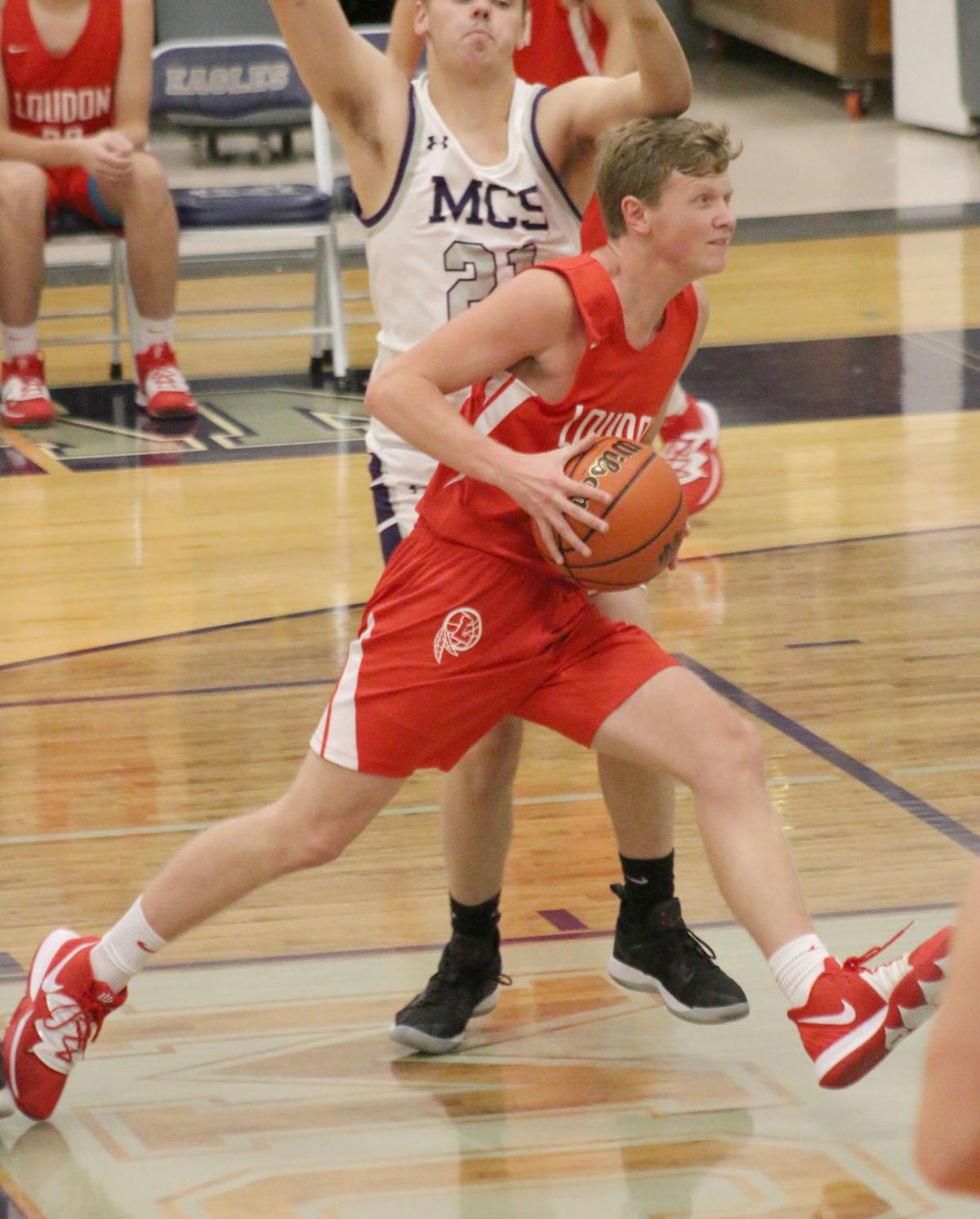 Loudon High School’s Austin Steil drives to the basket Thursday in the Redskins’ 60-57 win over the Maryville Christian School Eagles. 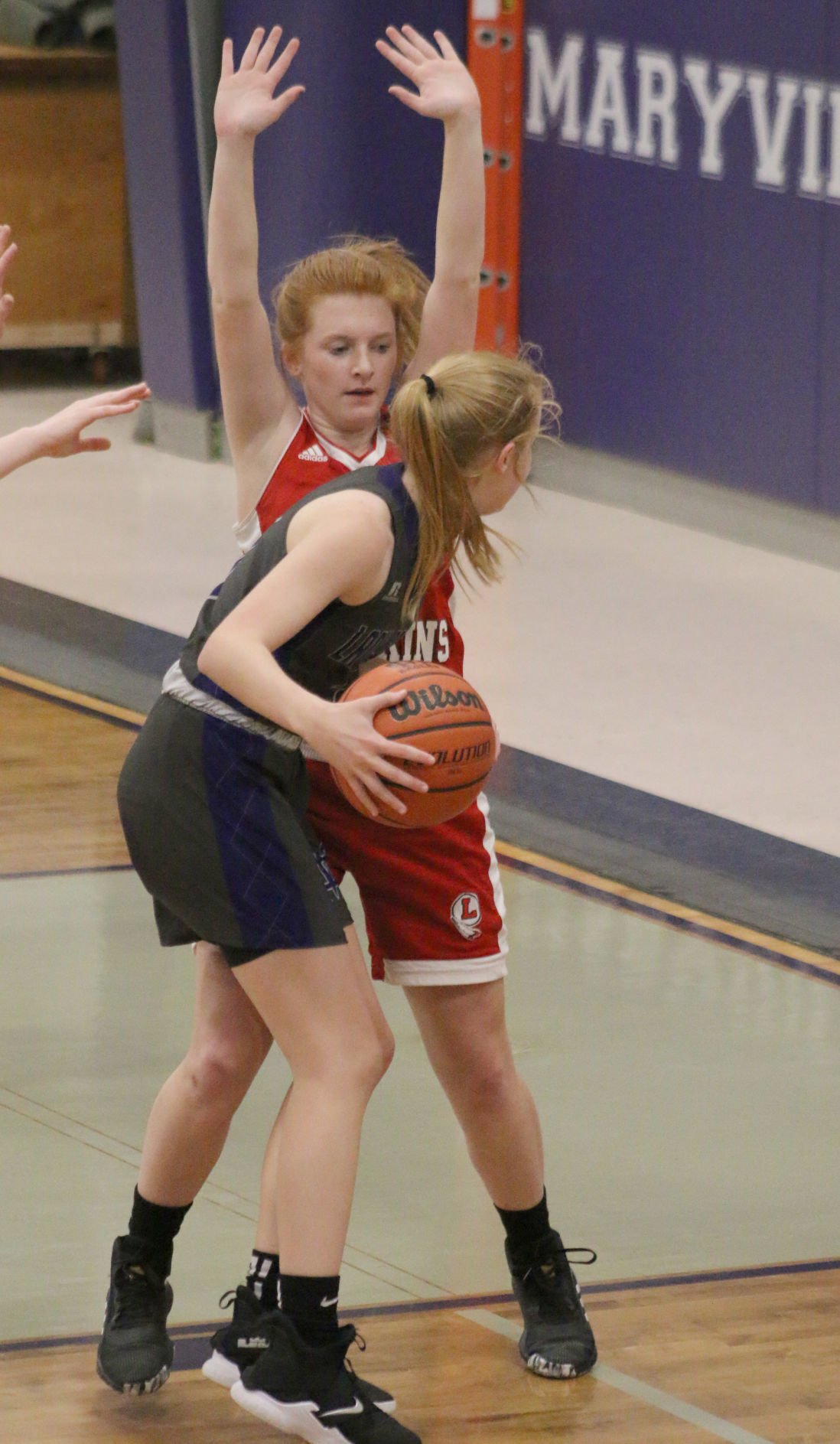 Loudon High School’s Austin Steil drives to the basket Thursday in the Redskins’ 60-57 win over the Maryville Christian School Eagles.

The Loudon High School boys and girls basketball teams were behind on the scoreboard most of Thursday night but managed to rally late in thrilling fashion to sweep Maryville Christian School on the road.

The Lady Redskins (2-0) lost and took the lead numerous times throughout the game before a late, nine-point push by junior guard Carrie Pittman gave the Lady Redskins a one-point lead with under two minutes to go.

“You know, that’s going to happen,” Josh Brannon, LHS girls head basketball coach, said. “Every single day, we talk about weathering the storm. Every single possession is a new opportunity, so we talked about this before the game. You might not get off to the same start ... how are you going to handle it when you get out there and some little adversity smacks you in the mouth? Our girls responded and this is a game that we could’ve easily caved in in some situations and have our backs broken, but we kept punching and found a way to win.”

The Lady Eagles regained the lead 20 seconds later with a pair of free throws and were poised to score again on an inbounds pass, but sophomore Ashley Stoner broke it up and gave the Lady Redskins possession.

Senior point guard Molly Russell scored 10 of 16 total points in the final minute on free throws to seal the 57-51 victory for the Lady Redskins.

“It’s just one of those aspects of the game,” Brannon said. “Games like this, you’ve got to be really, really good at the little things, whether that’s turnovers, free throws, rebounds ... kudos to our kids for having the mental toughness to step up and to knock down those when they mattered. That was the difference in icing the game off.”

Coming into the season, Brannon believed defense was going to be a strength, and he has been pleased with their performance.

“We got into a little bit of a pickle, but we were able to hit the reset button,” he said. “They probably didn’t anticipate that, so I thought it would be good to mix it up and look at it. Honestly, throughout the game, it looked like they started getting gutted out there and thought that our speed and athleticism could play to our favor and compensate what we didn’t have in length and size.”

A beam and all-around victory for Hu, Porter springs first place on vault

Life in the Red: Husker OC Lubick in video says year off 'lit a fire underneath me'

“The biggest thing was tonight, we knew they were going to play man,” Josh Graves, LHS boys head basketball coach, said. “Obviously, they’re going to key on Donovan (Blankenship), so early on we struggled a little bit ... it was kind of back-and-forth, but we made some adjustments at halftime to try and isolate Donovan a little more and get their post involved in our dribble-handoff offense. We made those adjustments late, and I just told them, ‘Guys, we’ve got to drive and kick and let Donovan draw all that attention, and somebody’s got to step up and hit some shots’.”

Senior guard Mike Kelley answered the call and knocked down a three with four minutes remaining in the game to give the Redskins the first lead since the six-minute mark in the third quarter.

Junior Donovan Blankenship then stepped up with a steal, two buckets and a pair of free throws in the final minute to edge out the Eagles for the Redskins’ first win of the season.

“We had to get a bucket, that was in my head the whole time,” Blankenship said. “We were playing defense and he threw it to me, so I just knew I had to go straight to the basket. It feels really good. Having younger guys get a win like this, it’s really good for the team. They don’t always get to play in games like this, so it feels really good to get this win.”

Blankenship put up one of the best performances of his high school career with 32 points.

“I was off in the first half, and I was off a little bit in the second half,” he said. “I finally started hitting some shots and things just started clicking, so I was grateful for that.”

The Redskins entered the night with just eight players — five of which were junior varsity. Senior guard Lucas Bivens was held out due to medical reasons, and junior forward Broady Harrison was out with an injury.

“We’ve got a lot of young guys playing right now and (have) some inexperience,” Graves said. “Donnie’s our only proven guy right now, so I didn’t want to overcomplicate it. I just told them, ‘Fight like heck, fellas. That’s all you can do right now.’ We got in our little trap and it boded well for us. We had some young guys step up and make big plays. To win like this without having 10 varsity players, it’s just a huge ... like Wiley (Brakebill) called it, it’s a huge program win for us.”

Loudon’s next game is Tuesday at Lenoir City High School, with the Lady Redskins starting at 6 p.m.