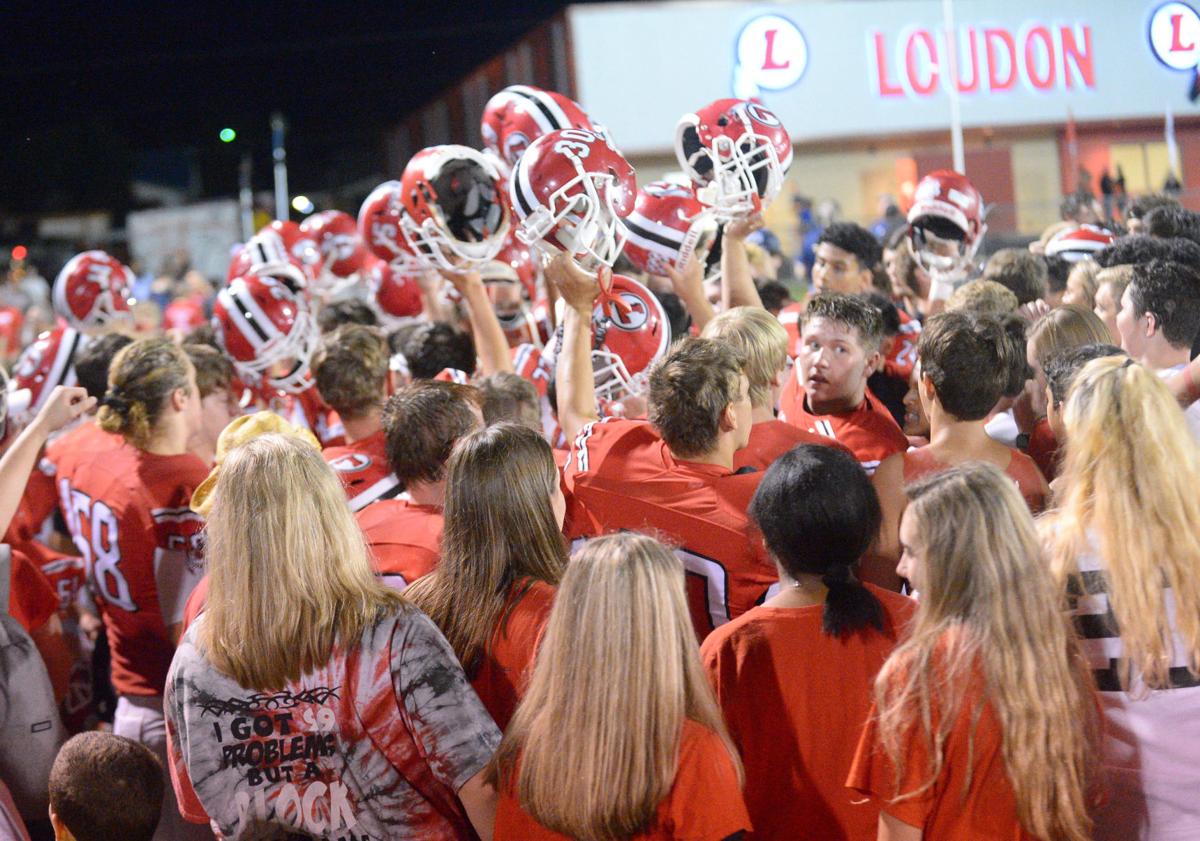 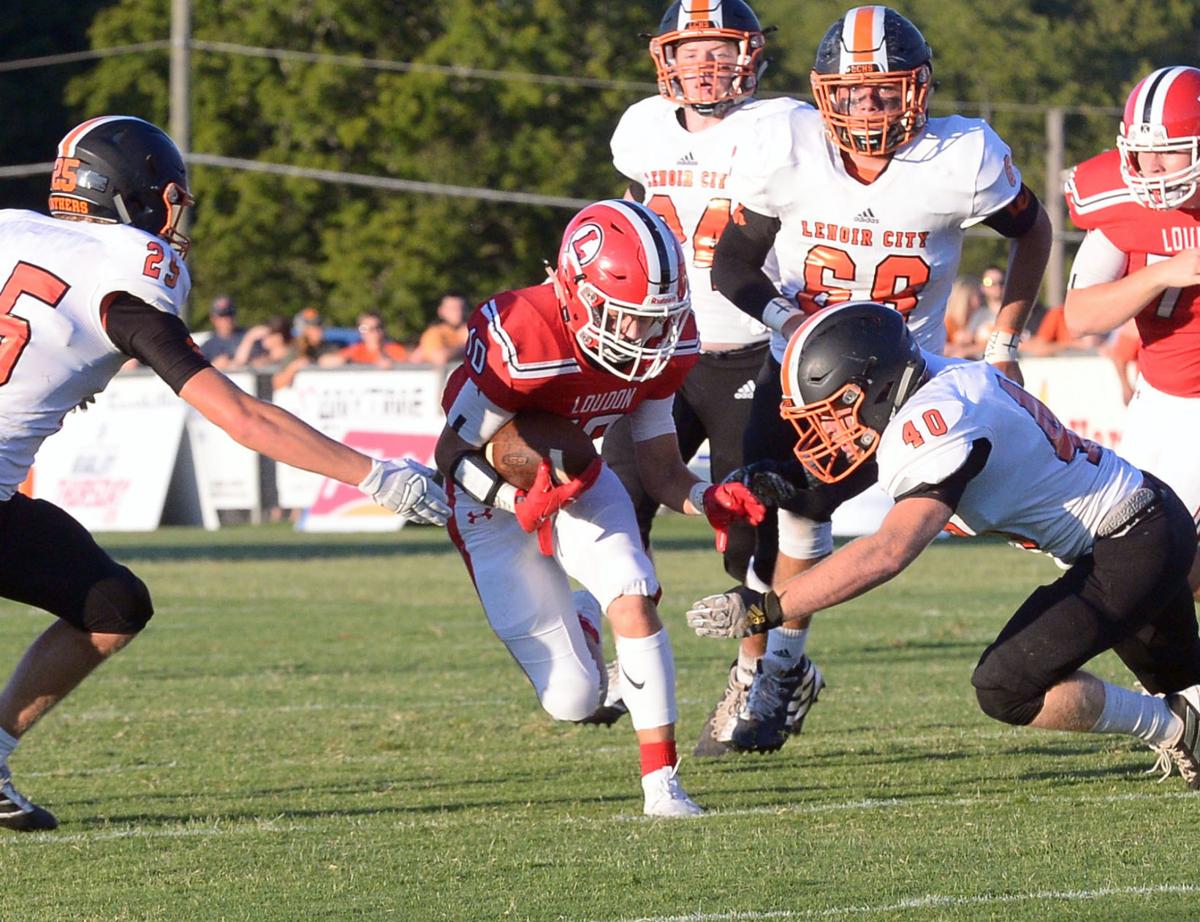 After suffering a crushing 42-14 loss to Lenoir City High School last season, the Loudon High School Redskins circled the calendar and made it a point to reclaim county bragging rights in 2019.

They got that chance Thursday in the 93rd annual Battle of the Bridge rivalry and avenged last season’s loss with a 28-7 victory over the Panthers.

The win also marked the program’s fifth time winning the Mayor’s Cup, which is a trophy presented to the Loudon County team that defeats the other two county teams in the same season.

“I mean, it’s just crazy coming out here starting 2-0 for the first time in my high school career,” Drew Jackson, LHS senior running back, said. “It feels great, playing well. With it being my senior year, coming out on top ... it just feels great, it’s an amazing feeling.”

“It’s huge,” Tyler Whitfield, LHS senior lineman added. “Last year, we didn’t win any of the Loudon County games, and this year we won both of them. It just feels great.”

While the Redskins came out with their 51st victory of the series, LHS head coach Jeff Harig was looking for more.

“Unfortunately, I’m just not happy,” Harig said. “I’m not happy with our execution tonight, offensively. Just little penalties, they faked a punt on us, botched field goal snaps — those are the things, unfortunately, that I can focus on. I’m happy for our kids. For our seniors, this is a great moment for them, but as a coach, we’ve got to play better than that.”

Both teams struggled to gain momentum early in the game until Jackson punched in the first touchdown to start the second quarter and give the Redskins a 7-0 lead.

“Once again, football is a game of adjustments,” Harig said. “Once they showed how they wanted to attack us, they hit us with some things that were weaknesses in our scheme, but those guys solidified quickly in the first quarter. We really sent five guys most of the night, and that took away some of their quick runs ... got pressure on their quarterback, and he didn’t have much time to get the ball downfield.”

LCHS junior quarterback Mason Stanley posed a threat for the Redskins on the ground and the air, but the Loudon defense stood strong and capitalized on several turnovers.

“With a young man who’s in his first two varsity starts, I think that’s going to happen ... I agree, he look a little flustered there in the beginning,” Jeff Cortez, LCHS head football coach, said. “He made a lot of plays with his feet, come to think of it, so that’s good to see. It’s a process for him — him getting used to people rushing and not getting his eyes down, staying in the pocket just a hair longer sometimes.”

The Redskins scored the second touchdown of the game to go up 14-0 with less than five minutes remaining before halftime when sophomore quarterback Keaton Harig scrambled right and lobbed a floater to freshman receiver Semy Turner in the end zone.

One of the biggest plays of the game came seconds later when Whitfield intercepted Stanley on the Panthers’ first play of the ensuing drive to set up another touchdown run from Jackson to go up 21-0 at halftime.

“I was just amazed,” Whitfield said. “The lineman, he just didn’t block me. I looked back, I see the running back coming down the line and my instincts said, ‘Just to get there, drop there’.”

The Panthers managed to score a touchdown midway through the fourth quarter when Stanley delivered a pass down the middle to senior tight end Jonah Rittenhouse, who reeled the ball in one-handed and took it 43 yards into the end zone.

During the preseason, Whitfield showcased his ability to run and catch in practices and camps, which led to him playing receiver on offensive series.

“It was outstanding,” Whitfield said. “Coach (Candics) Jones, he called it. I was just out there stomping my head going, ‘Oh man, it’s my time.’ The 7-on-7s, I was going there for center. We started goofing off and throwing me routes, and I guess I surprised them, so they put me out there. It’s been pretty good, and I enjoy it.”