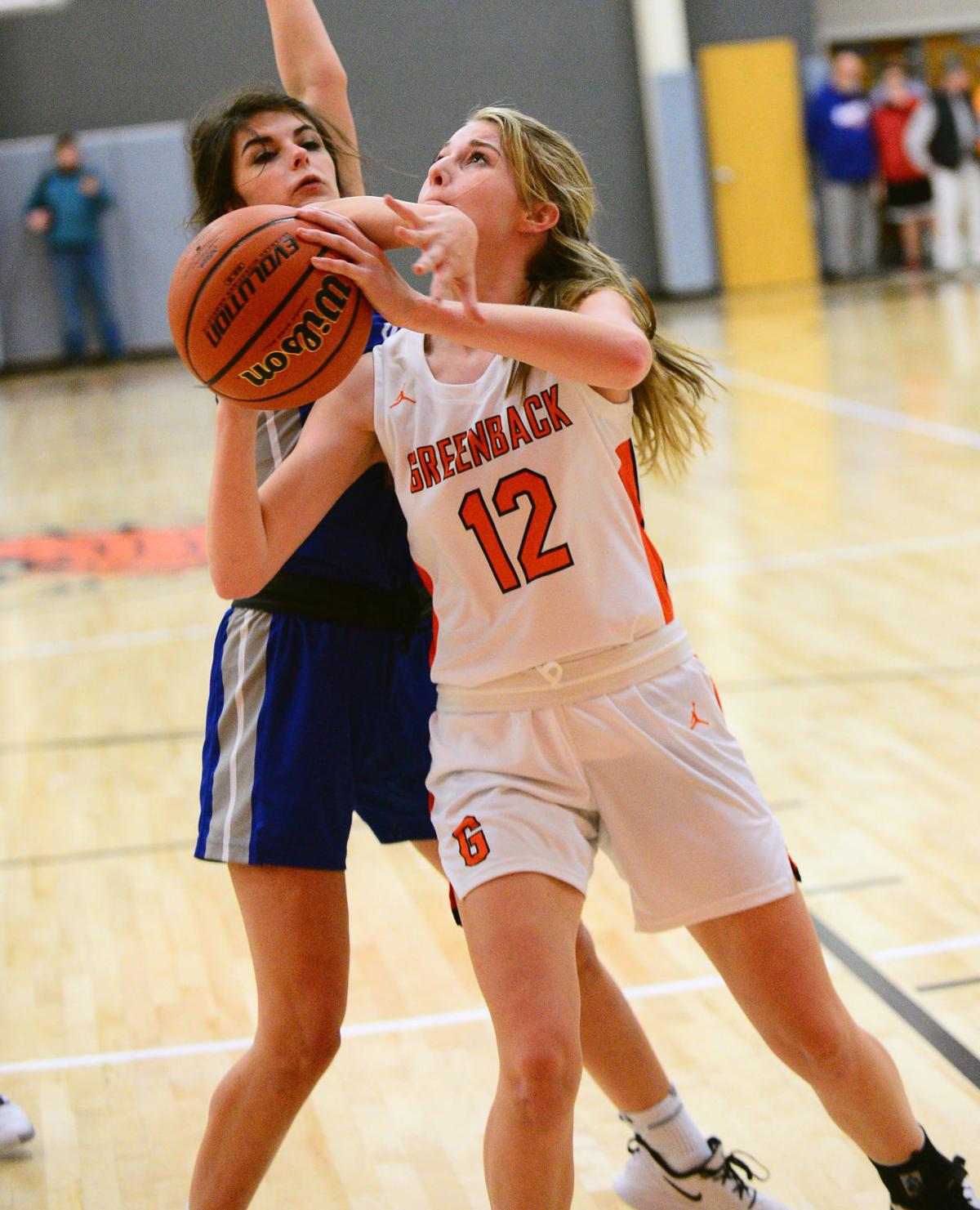 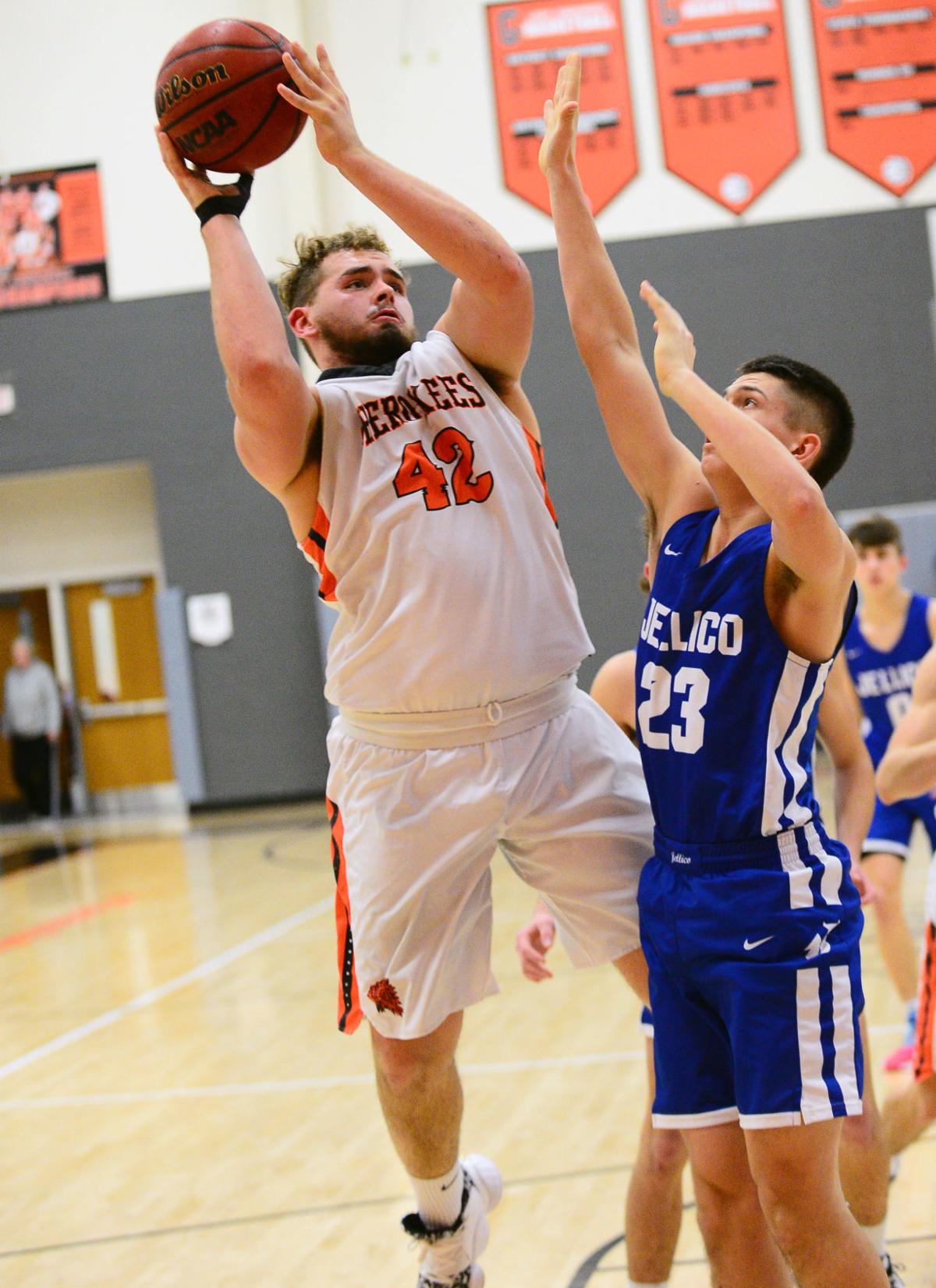 Greenback School's Hazen Carlton pulls up for a shot Friday in the Cherokees' 76-57 loss to the Jellico High School Blue Devils.

Greenback School's Hazen Carlton pulls up for a shot Friday in the Cherokees' 76-57 loss to the Jellico High School Blue Devils.

“We had several challenging games and actually with the Midway game, I felt like we probably should’ve pulled that one out,” Angie Lucier, Greenback head girls basketball coach, said. “To come back and really execute the game plan, you know, our first-half defense was pretty intense and held them a low-scoring game, so I was pleased with that. The girls, I think, it felt good after the stress we had been under the past few games.”

The Lady Cherokees took a 19-4 lead in the first quarter before adding 20 more points to lead 39-12 at halftime. Jellico attempted to mount a comeback in the second half, but the Lady Cherokees’ stonewall defense limited the Lady Blue Devils to two points in the fourth quarter.

“I could say with that win that we executed the game plan from our coaches very well and that did boost our confidence a ton, especially for our big games coming up because we have Loudon and Cosby, so that’s going to do a lot for us,” Morris said. “Honestly, the last couple of games before Jellico, we had a really rough patch. I mean, we had really good practices after those losses and we came back and we had a really good game plan and we actually executed. It just helped get shots off a lot more and we were able to hit them.”

Lucier has been pleased with Morris’ recent offense, despite playing through all five positions on the floor.

“Offensively, she’s really been pretty solid for us here in the past several games and even in the Midway game, she hit a really high percentage of her shots,” Lucier said. “She’s real comfortable, offensively. She plays with a lot of aggression on the offensive end, and it works out for her quite a bit.”

Lucier believes the team needs to improve shooting and rebounding before the District 2-1A tournament in February.

“We’re continually looking to try to improve upon what we’re doing, I mean, we can only work with what we’ve got,” she said. “Having a guard-oriented offense has worked some, and then there’s times that it’s not worked, so we’re constantly working to tweak that and see if we can come up with things that are going to get us good looks down the stretch. We’ve been in a couple of close games and they’ve slipped away from us on the end because we’ve not been able to execute and get the look we want down the stretch, so that’s definitely something we’ve been working on in practice.”

Greenback sits in second place in the District 2-1A standings behind Cosby. The Lady Cherokees took on Tennessee School for the Deaf on Tuesday after presstime.

The next game is 6:30 p.m. at Hancock County High School. Greenback decisively defeated the Lady Indians 50-29 in the previous meeting.

“It’s a pretty good way to start out the season, and we, of course, have the goal to win the district, but with having the one loss at Cosby in a close game it definitely gives the girls the idea that they have every opportunity to get a district championship for the tournament and possibly tie with Cosby for the regular season,” Lucier said. “We just try to approach every game that we’re going to try to get better so we can advance when the tournament time does roll around. It’s a good confidence booster when you feel like you’re, right now, second in the district and can potentially finish on top.”

The Greenback School Cherokees dropped their 12th game of the season and fourth in district play Friday in a 76-57 loss to the Jellico High School Blue Devils.

The Cherokees held a late, one-point lead over the Blue Devils following the third quarter, but Jellico caught fire and scored 31 points in the fourth and held the Cherokees to 11.

“Well, I mean, we continue to improve and we got better last week and played a really good basketball team and led after three quarters,” Bryan Powers, Greenback head boys basketball coach, said. “The best part is I can definitely see us improving. That was my main takeaway is our improvement is still ongoing, so we’ve just got to keep working. I feel like our physical side, we need a little bit better work, we need to be able to last a little bit longer every game. We’re getting three quarters now instead of a half, so the physical aspect of that has definitely improved.”

Hazen Carlton and Blain Mashburn led the team in scoring with 22 and 13 points, respectively. Powers said he needs to rely more on his two post players.

“They definitely, Blain and Hazen, have definitely stepped up their game, and we’re working inside-out now, which is what we need to be doing,” Powers said. “That’s taking a lot of the pressure off Conner (Morton) from having to hit outside shots. It’s allowed us, too, to maybe get in our offense a little more, kind of what what we want to do, offensively. If Conner’s having to do things, we’re not in the right element, I feel like. I feel like with those two stepping up, we’ve been able to do our thing a lot better.”

The Cherokees took on Tennessee School for the Deaf on Tuesday after presstime. Greenback will be on the road Friday to take on the Hancock County High School Indians in hopes of avenging a 64-40 loss earlier in the season.

Greenback was slated to host a district double-header Saturday against Clinch High School, but the Wildcats have since dropped out of District 2-1A.

“We have a long road trip to Hancock County,” Powers said. “Hopefully, we’ll just continue to progress and get better this week, hopefully get two wins this week.”