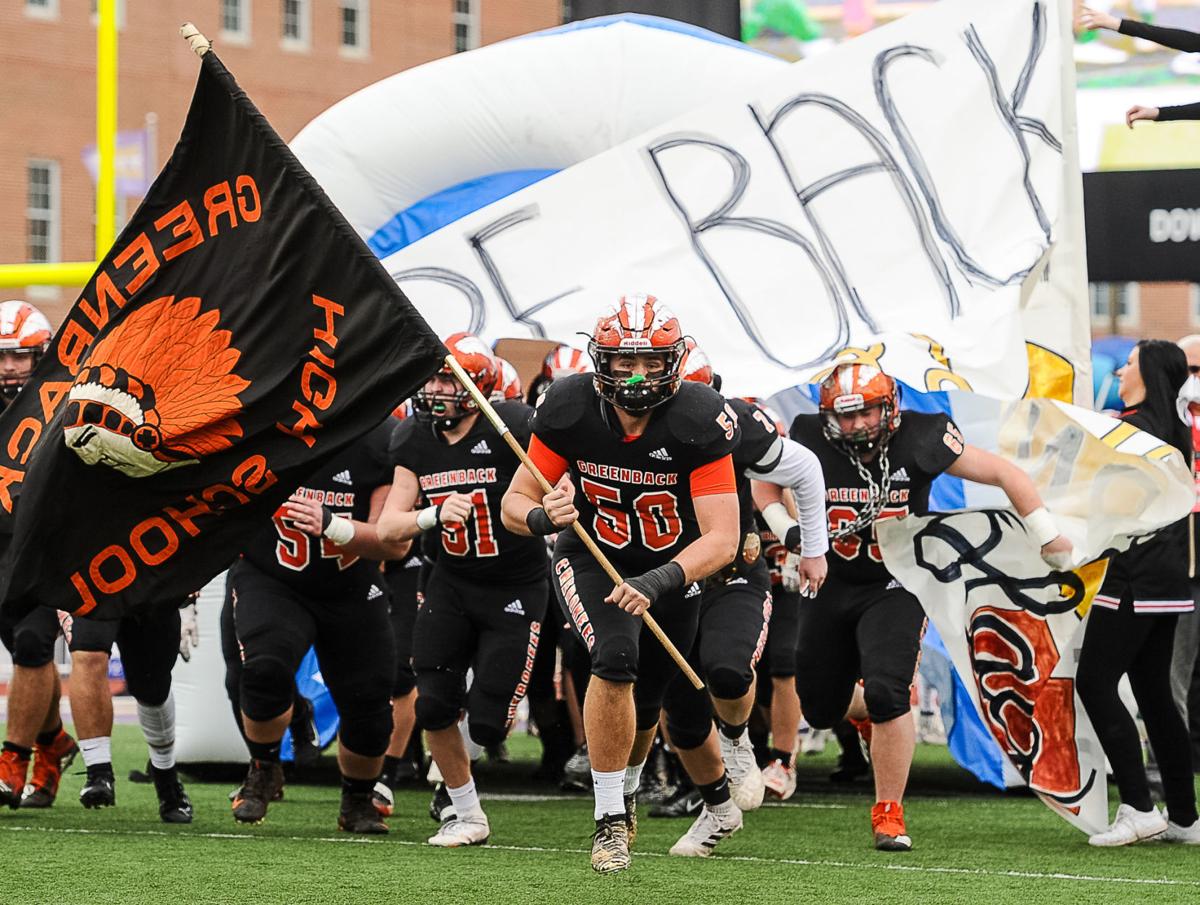 The Greenback School Cherokees football team runs onto the field Dec. 6 prior to the Class 1A state championship game at Tennessee Technological University’s Tucker Stadium. 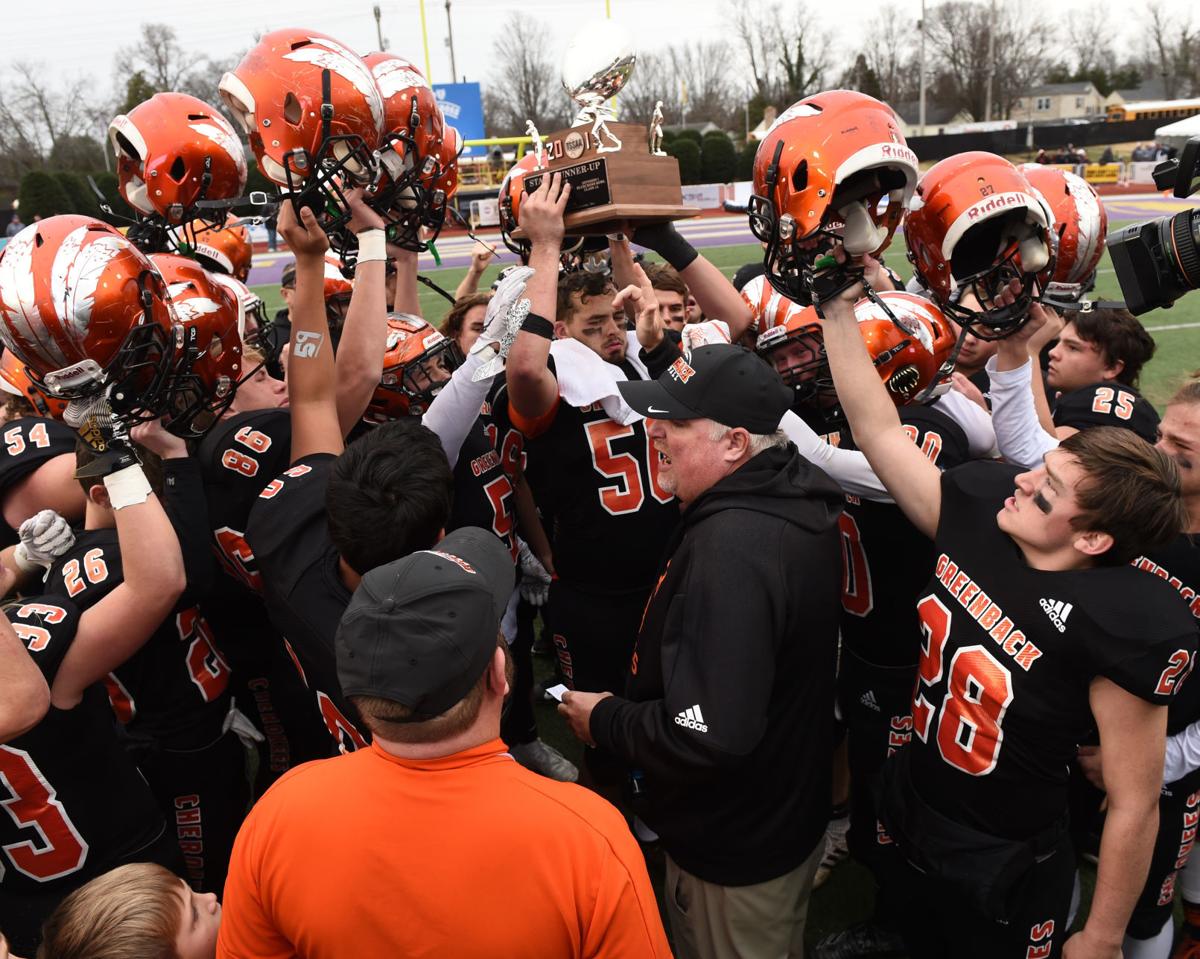 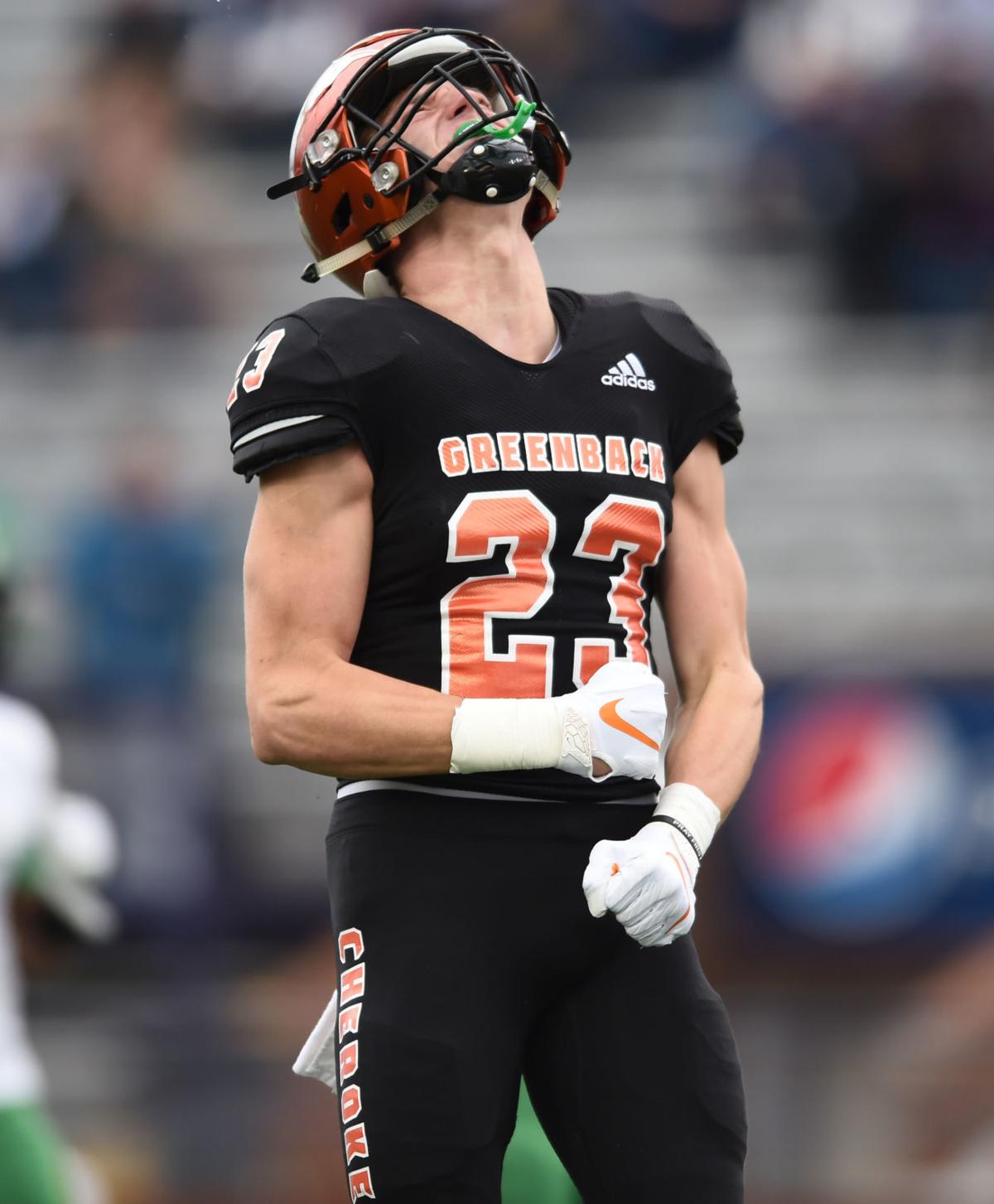 Greenback School’s Holden Willis lets out a shout Dec. 6 during the Class 1A state championship.

The Greenback School Cherokees football team runs onto the field Dec. 6 prior to the Class 1A state championship game at Tennessee Technological University’s Tucker Stadium.

Greenback School’s Holden Willis lets out a shout Dec. 6 during the Class 1A state championship.

Now that the high school football season is officially over, Greenback School fans, players and coaches are celebrating another milestone in the program’s recent dominance.

When head coach Greg Ryan took over prior to the 2015 season, he knew he had to set the standard higher in order to be successful.

“It was not like Greenback was not making the playoffs and having a traditional good season, they had made it to the quarterfinals a couple of years in a row, but we obviously had a challenge,” he said. “That was not our goal as a coaching staff when we took over. The goal was to get the opportunity to play for a state championship. Five years later, we never assumed or expected to play for four of them. When we got the program, it wasn’t in bad shape by no means, but we knew that there were a lot of little things that we could focus on to make the program better. I think we’ve done a pretty good job of doing that, and it’s been a fun five years.”

“When you’ve got Hunter Willis, Kayne Roberts, Josh Silvey and Tavin Kilpatrick as your core older guys, and then you had guys like Devin Devine and Jaden Harris and Michael Thacker ... you throw in those talented guys like that all had or could’ve had opportunities to play at the next level, it let us develop some depth,” Ryan said. “It let the young guys not have to play at a young age and get to see exactly what the coaches expected from them, and then it just kept rolling from there.”

The Cherokees fell short in both state title games to Nashville Christian in 2015 and Dresden in 2016.

“We just run into Nashville Christian in the state championship,” Ryan said. “Arguably (the University of) Tennessee’s best football player right now is Daniel Bituli, and he was on that football team, along with other nose guards that are at Tennessee now. They were really loaded, and I venture to say they could’ve won more than just single A. It was an achievement for us to get to the semifinals. We just run into a really great team.”

Hanley replaced Willis as the team’s quarterback and knew the team was on the cusp of a breakout season.

“I think just growing up in middle school and everything, you kind of always knew we were on the verge of being something great, but we just never could cross out third downs and get it done,” Hanley said. “I think in my eyes, I always thought we were really good. I guess with Kayne and Silvey and whenever we got Coach Ryan, I guess that kind of made me think we could be something good. Personally, as a junior playing CAK, that kind of opened everybody’s eyes and realized how good of a team would could be.”

The Cherokees blazed their way to a third consecutive Class 1A state championship game and came out on top with a 42-21 victory over Cornersville High School for the first title in 30 years.

“I think in 2015, going back to then and playing in the state championship, I think the guys understood what it took to get to that point, and we were able to do it again in 2017,” Ryan said. “At the end of the day, we get another silver ball, and we lose seniors like Hunter Willis, Tavin Kilpatrick, Josh Silvey and Kayne Roberts, you don’t expect another season to be quite like the past two. Going into 2017, our expectations were always high, but when you lose those top seniors, you can obviously see holes that guys are going to have to step up and fill. The good news was in 2017, we had a lot of weapons like we’ve had — it makes you very tough to defend when you can spread the ball out to a lot of guys, spread the field and make them defend. We’ve been blessed with a lot of team speed.”

With the majority of the team returning in 2018, the Cherokees were poised to repeat as state champions. However, their season came to a end in a three-point loss to the Whitwell High School Tigers in the semifinals.

Driving for 6: Hitting the recruiting trail for 2022 updates, big summer plans and a personnel note

Ryan knew there were even more holes to fill heading into 2019 after losing another highly talented senior class. Many of those questions were answered during the offseason with the arrival of several talented transfers, including senior quarterback Braden Carnes from Maryville High School.

“I knew they were successful in years past, and they won state the same year I won state at Maryville, so I knew they were good,” Carnes said. “I knew they liked to throw the ball, I knew Bryce Hanley before I actually came to Greenback. He broke all sorts of school records, had a great year and won Mr. Football. I knew the community really backed the football team and really backed every sport. It was just somewhere where I wanted to come play and somewhere where I thought I could be the best person and be the best quarterback I could be.”

The Cherokees started the season with losses to Loudon and Meigs County high schools before reeling off 12 wins to reach the fourth state title game in five years.

“We did lose a lot from last year’s team and anybody can tell that, but when you get close to six dominant transfers that could play at about any school in this area ... they come in valuable spots that they had to have filled, such as receiver and quarterback, we knew with Coach Ryan, too, that they were going to be a great team again,” Hanley said. “We all left, and they were able to fill those spots easily with transfers.”

Greenback went head-to-head with Lake County in the BlueCross Bowl on Dec. 6 but fell 38-23. The team set numerous records and received numerous accolades.

Carnes also broke several school records and became only the second quarterback in Tennessee Secondary School Athletic Association history to throw more than 50 touchdowns in a season. He finished the year with 4,141 yards and 52 touchdowns through the air and added 304 yards and five touchdowns on the ground.

“It was unbelievable, it was everything I could’ve wished for,” Carnes said. “The Greenback community welcomed me with open arms. I’m super thankful, super blessed to be able to play here. Even though we didn’t end the season how we wanted to, it was still a great run and a great season. I wouldn’t trade a thing for sure.”

Hanley believes Ryan’s knowledge and passion for the game are the reasons behind the success.

“I can’t give enough credit to him, but I mean, he’s just a player’s coach that will do anything for you,” Hanley said. “I got to feel it because he came in with my class, and as a freshman I got to experience all the way to my senior year. He’s a father figure to me, but he can be that to anybody. Just him getting us prepared throughout the whole week leading up to game day is just what makes him different.”

The Cherokees will again look to reload for 2020 and cement a legacy in Class 1A.

“There’s no doubt Greenback’s been a dynasty the last five years,” Ryan said. “In single-A football, it’s super hard to do. I don’t think that Greenback’s probably gotten the notoriety for being a dynasty because of the area we live in with Maryville and Alcoa just right up the road winning year in and year out — it’s kind of the norm in this area. Well, it’s not the norm in single-A football. Alcoa and Maryville are very fortunate 60, 70, 80, 90, 100-plus guys on the team, not counting freshmen. This past season, we had 42 guys, counting eighth-graders, and for the most part, really played 14 guys. For a single-A program to make a run like we’ve had ... it says a lot for the community, it says a lot for the school, it says a lot for the coaching staff. People in the area want to play for winners.”

Sorry, there are no recent results for popular articles.

Sorry, there are no recent results for popular images.

Sorry, there are no recent results for popular videos.