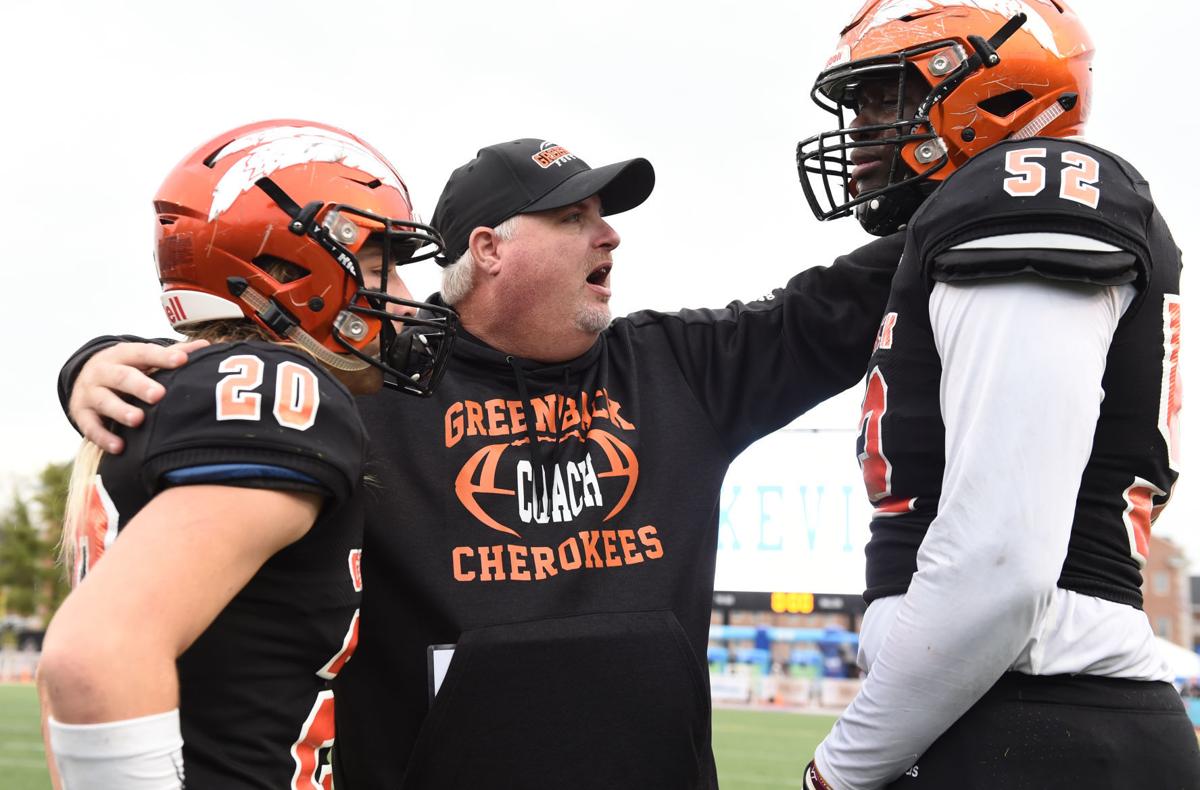 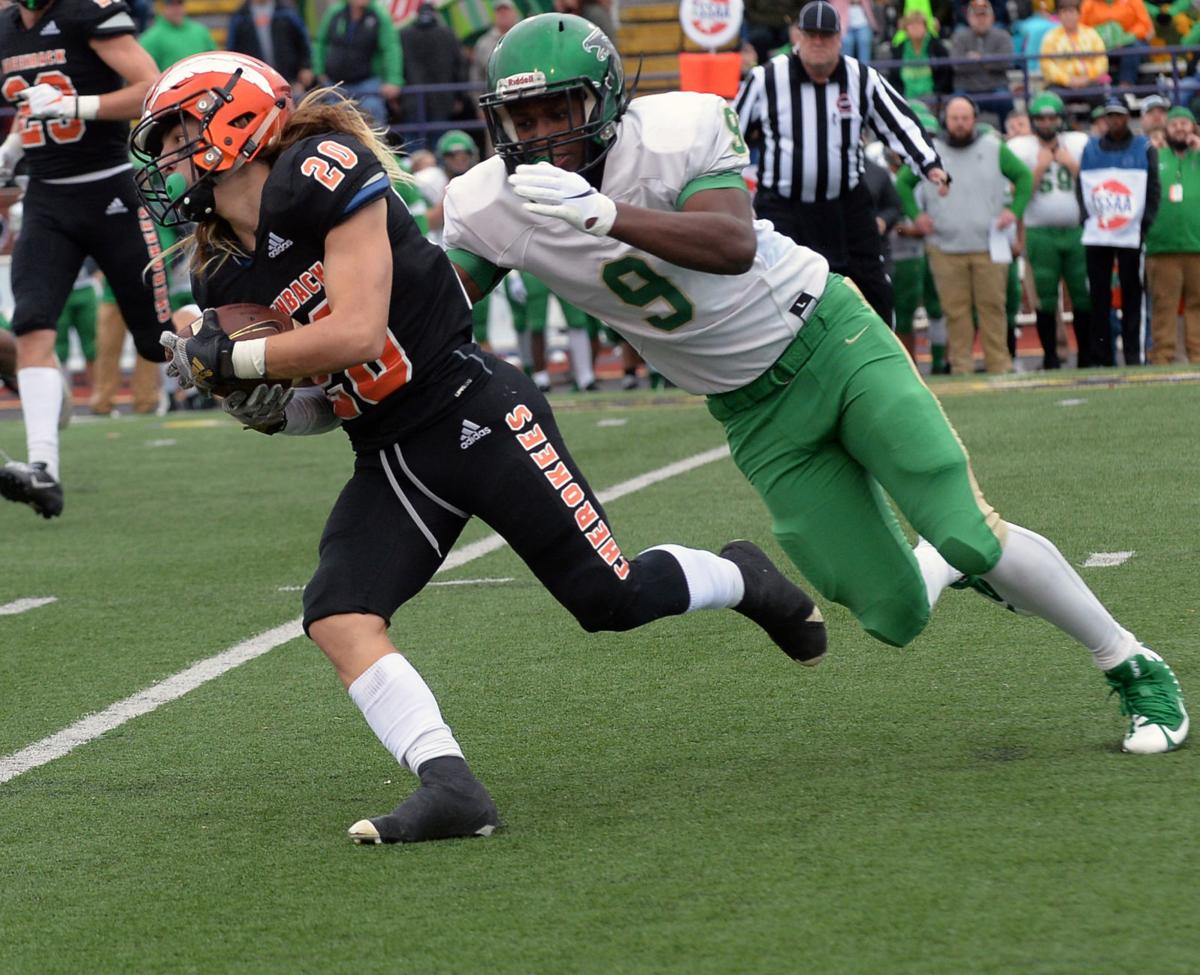 Greenback School's Duke Stinnett runs past a defender Friday in the Cherokees' 38-23 loss to the Lake County High School Falcons in the Class 1A state championship at Tennessee Technological University.

Greenback School's Duke Stinnett runs past a defender Friday in the Cherokees' 38-23 loss to the Lake County High School Falcons in the Class 1A state championship at Tennessee Technological University.

The Greenback School Cherokees found themselves in an exciting, back-and-forth affair with the Lake County High School Falcons in the Class 1A state championship game Friday, but a pair of costly interceptions in the fourth quarter diminished their hopes of bringing the gold ball home.

The Falcons capitalized on two interceptions in the fourth quarter that resulted in touchdowns to run away with a 38-23 victory and their first Class 1A state title since 1985.

“We didn’t win, so I’m not happy but a lot of credit to Lake County,” Greg Ryan, Greenback head football coach, said. “I’m sure that going into the ball game their thoughts were they would be more physical than us, and I’ll be honest with you, they probably were.”

The Cherokees struggled to contain the Falcons’ defensive line and linebackers, which resulted in three tackles for loss, a sack and 16 quarterback hurries.

“Early in the first half, we had some protection issues,” Ryan said. “It wasn’t nothing we hadn’t seen, it’s just we had some communication issues. It feels like in the second half, we just got beat physically one-on-one. Anytime that happens, you know it’s not going to be a good night, especially when you’ve got to throw it like we do.”

The Falcons struck first early in the first quarter after starting with the ball at midfield. Greenback gained some momentum nine plays into the drive after a false start and bad snap pushed the Falcons back to the Greenback 17-yard line.

However, LCHS quarterback Tanner Snyder delivered a 17-yard pass to Izaiah Matheny into the end zone. LCHS converted the two-point conversion to go up 8-0.

The Cherokees tied the game late in the second quarter, thanks to two big pass plays to Duke Stinnett that covered 57 yards. Holden Willis capped off the drive with a 1-yard touchdown run, followed by a pass from Braden Carnes to Alex Belcher to convert the two-point conversion to head into halftime tied 8-8.

After giving up another touchdown to start the third quarter, the Cherokees immediately bounced back on their first offensive play with a double pass from Willis to Wyatt Rutgerson to tie the game at 16-16.

“It was great, we’d actually been practicing that for a while,” Rutgerson said. “So I’m kind of glad it went our way on that one, and I really thought the momentum was changing on that play.”

Driving for 6: Hitting the recruiting trail for 2022 updates, big summer plans and a personnel note

The Falcons dealt another blow on the ensuing drive, scoring in six plays but missed the two-point conversion when Willis rushed from the edge and stopped the run. Unfortunately, Willis suffered a broken ankle during the tackle.

“The center gets it and throws it out, I knew it was coming,” Willis said. “We’ve studied for it all week because they did one time ... by the time I got over there and made the tackle, I got him wrapped up, but my foot my just rolled straight over top of him.”

Greenback again responded on the next offensive series, sparked by a 41-yard pass from Carnes to Stinnett. Rutgerson rushed into the end zone three plays later, and an extra-point attempt pushed the Cherokees out front 23-22 heading into the fourth quarter.

The Cherokees were poised to score again, but the Falcons came up with an interception just outside the end zone to set up a nine-play scoring drive that pushed LCHS back out in front 30-23.

“Yeah, it was probably bad play calls on my part,” Ryan said. “I mean, Carnes is going to be very upset, there’s no doubt, he had pressure, running for his life the whole ball game ... maybe a couple of ill-advised throws where he didn’t see a guy a time or two. At the end of the day, it’s my job to have them ready, and it’s a very good possibility that I didn’t do a great job today, so I take all the blame. I’m just very proud of the boys on how the season went.”

Lake County delivered the final punch on the first play of the Cherokees’ ensuing offensive drive when Snyder picked off Carnes and returned it 29 yards into the end zone.

“It did turn into a little shootout right there, but unfortunately, we came out on the wrong end,” Carnes said. “They were just bringing in more men than we could block sometimes. It’s not on the offensive line, it’s on me as much as it is on them. They’ve been great all season. This doesn’t define us. It didn’t end how we wanted, but overall, it was a fun season. I’m proud to be a Cherokee.”

The Falcons outgained the Cherokees 535-239 yards in total offense and completed 20 first downs to Greenback’s nine.

“A lot of credit to them, they’ve got a really good offense,” Ryan said. “It’s a really hard offense to stop from them getting first downs, and we bowed our neck when we had to. In the second quarter, we made some critical stops. We’ve just got to finish drives and turnovers at the end of the game, it’s hard to win games. We had three guys get hurt. We played 14 on the season and when three of them go out, it’s a big difference.”

Sorry, there are no recent results for popular articles.

Sorry, there are no recent results for popular images.

Sorry, there are no recent results for popular videos.